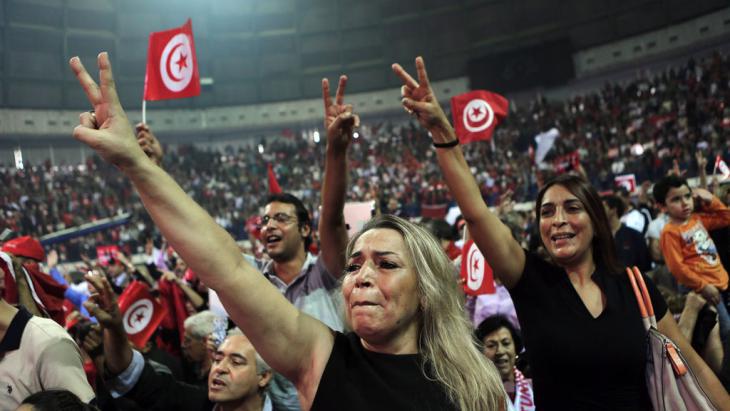 Presidential election in Tunisia
The temptations of the gentle restoration

Stability and security, rather than revolutionary turbulence and Islamist experiments: the good showing by veteran politician Beji Caid Essebsi in the first round of Tunisia's recent presidential election can be read as a desire for a revival of the Bourguiba era. An analysis by Beat Stauffer

This is not what the standard-bearer of a revolution looks like: Beji Caid Essebsi, who will soon be 88, is about as far removed as you can get from the embodiment of the values of a revolution initiated by despairing and frustrated young people in Tunisia's desolate hinterland.

Yet the old politician, who was a minister under Bourguiba and parliamentary president during the first years of the Ben Ali dictatorship before withdrawing from politics, achieved by far the best result in the election on Sunday, 23 November 2014. There will be a run-off at the end of December, in which Essebsi will go head-to-head with the incumbent president, Moncef Marzouki.

The fact that a man of his age can almost get an absolute majority in the first round of an election says a lot about the situation in post-revolutionary Tunisia. It is as clear as day: Essebsi is not the representative of any kind of a revolution, but the "saviour of the fatherland", to use the kind of emotional parlance that is commonplace in Tunisia.

He is the only person Tunisians trust to set the rolling ship back on course, head off the dangers that threaten the country, and correct the massive mistakes made by the so-called troika government and President Moncef Marzouki. The fact that terrorist groups linked to al-Qaida have ensconced themselves in a mountainous area on the border with Algeria is a source of anxiety for the Tunisians, as are the country's serious economic and social problems.

But above all, Beji Caid Essebsi is the only person many Tunisians trust to put a stop to "Ennahda" and its campaign to permanently Islamicise society. Hundreds of thousands may well have given their vote to the veteran politician, expressing their desire for a clearly secular society where religion is limited to the private sphere. 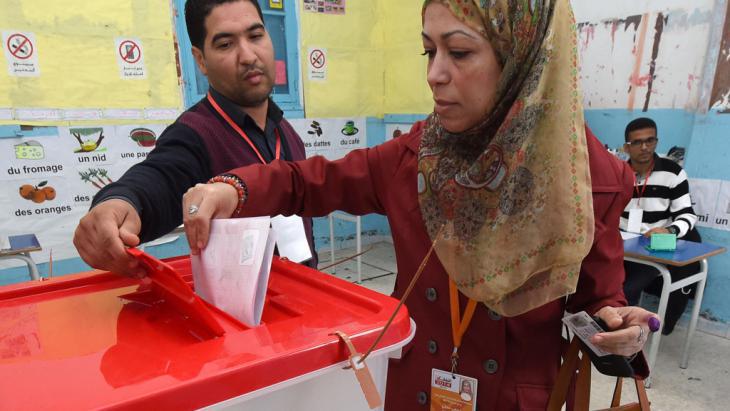 After the first round of voting in Tunisia's first free presidential election since the revolution almost four years ago, there will be a run-off between the two most popular candidates: Beji Caid Essebsi of the secular-leaning "Nidaa Tounes" (Call of Tunisia) and the incumbent president, Moncef Marzouki, who was not elected by the people but by the constituent assembly in 2011. Beji Caid Essebsi came first in round one but did not get a majority

It requires considerable intellectual contortions to connect the old gentleman with revolutionary ideas and, most particularly, with this revolution. But some have tried it anyway. "Paradoxically, the figure of the wise old man embodies the myth of the revolution and its world of ideas – rather than the counter-revolution, as one might assume at first glance," wrote the former diplomat and sociologist Farhat Othman.

This, with all due respect, is humbug. It may be true that Essebsi represents the secular values of the revolution – such as work, dignity and freedom. But at the same time, he belongs and has always belonged to the political establishment and is a very long way from the dissatisfied young people who started the revolution. In addition to this, although he never compromised himself under Ben Ali, he was also never known for actively opposing the regime.

The dark side of "Bourguibism"

No, Beji Caid Essebsi stands for a gentle restoration – not of the Ben Ali regime, but of "Bourguibism". Many may not see this as a problem: after all, some of the Tunisian Republic's fundamental advances were achieved under Bourguiba, such as the emancipation of women and the development of a comparatively good education system.

Building on that era now seems highly desirable to these Tunisians. Critics have admittedly pointed out that "Bourguibism" had its dark sides and that under Essebsi, Tunisia risks becoming a pale imitation of the Bourguiba era.

"Beji Caid Essebsi has not even sketched an outline of how he is going to lead Tunisia out of the present crisis and what plans he has for the future," says the legal expert Ridha Fraoua, who feels that the collective movement that is "Nidaa Tounes" (Call of Tunisia) could well fall apart soon after the elections.

Others criticise Nidaa Tounes for putting enormous pressure on the secular powers to elect the "unity candidate" Essebsi in order to prevent any splitting of the vote. The slogan was that this election is Tunisia's date with destiny; a choice between either Essebsi or the Islamists. "It's as if the Tunisians have forgotten that the spark that ignited the revolution was the suicide of a young vegetable seller who was suffering social injustice," writes Habib Mellakh. "The only concern at the moment seems to be saving the country." 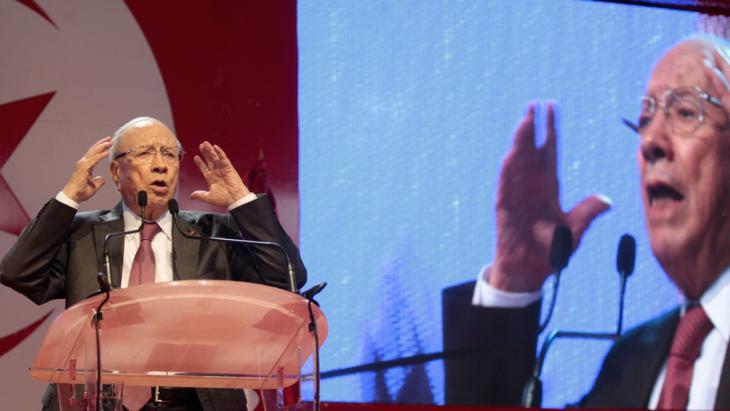 The saviour of the nation? "This is not what the standard-bearer of a revolution looks like: Beji Caid Essebsi, who will soon be 88, is about as far removed as you can get from the embodiment of the values of a revolution initiated by despairing and frustrated young people in Tunisia's desolate hinterland," writes Beat Stauffer

But why do so many Tunisians believe that their country is urgently in need of a saviour? There are in all likelihood three critical factors here.

Firstly, the Islamist-influenced Troika government has plunged the country into an unprecedented crisis. Although, admittedly, some post-revolutionary turbulence would have been unavoidable even under a secular government, the tremendous leniency shown to Islamist groups that are prepared to use violence has led to serious security problems.

At the same time, the standard of living among ordinary people has decreased dramatically over the past four years. Consequently, the Troika government's record is not good, and the economic outlook for the coming years is rather bleak.

Secondly, people are disappointed by many former opponents of the Ben Ali regime. If the distinguishing features of the Islamists, who suffered repression at the hands of Ben Ali's regime, were incompetence and ideological fixation, many of the secular critics of the old regime have revealed themselves to be dubious opportunists, prepared to enter into the most precarious of alliances if it will help them retain power. This goes in particular for Moncef Marzouki and the president of the National Constituent Assembly, Mustapha Ben Jaafar.

Both politicians are often seen in Europe as "heroes of the revolution". In Tunisia, however, they have a huge image problem. Marzouki, in particular, is derided for his problematic administration and his failure to dissociate himself from "Ennahda". People across the country are calling him a "clown" and the "puppet" of the Islamists.

"Willing tool" of the Islamists

It is clear that Marzouki lacks a minimal degree of sensitivity regarding his administration. Anyone who invites Islamist preachers who are willing to use violence to the presidential palace and allows himself to be recommended as a candidate by the "Leagues for the Protection of the Revolution", who are equally prepared to commit violence, has squandered his credit. 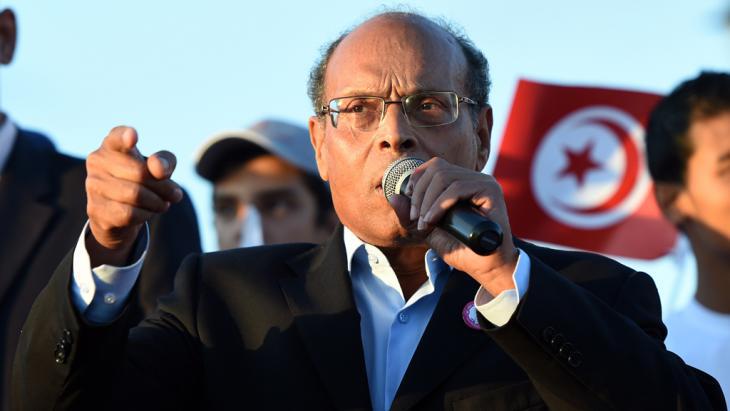 Hapless president: according to Beat Stauffer, the former human rights activist and doctor Moncef Marzouki (pictured here) is derided for the problems that have dogged his administration and for his failure to dissociate himself from the Islamists – moderate and violent alike. Many even consider Marzouki an Islamist puppet

A spokesman for these leagues recently went on record as saying that if Essebsi is elected, "rivers of blood will flow". But Marzouki, himself a former human rights activist and doctor, didn't seem to view the statement as a reason to distance himself from these violent militants. And this makes the secular powers even more determined to prevent this "willing tool" of the Islamists from remaining in the presidential palace in Carthage.

There is huge disappointment in Tunisia over the career of former regime opponents and over the behaviour of other politicians, leading to a dangerous lack of interest in politics among the younger generation. Larbi Chouika, one of the country's most renowned analysts, has described the situation as follows: "There is no political class; there are just protagonists with inflated egos and no sense of the common good," wrote Chouika. "This battle of egos has made a decisive contribution to the current disenchantment with politics."

The image of the strong man

But there may be more deeply rooted, cultural reasons for the support for the veteran Beji Caid Essebsi, according to constitutional expert Ghazi Gherairi. For Tunisians, the president has always been an all-powerful figure, says Gherairi: father figure, leader, boss, commander-in-chief. According to Gherairi, the president also embodies "national transcendence and the state empire."

Such ideas may be particularly widespread among the poorly-educated masses; they would work in Essebsi's favour and against Marzouki, who in the eyes of many Tunisians has never embodied the dignity of his office.

Quite apart from such considerations, it is clear that the future president of Tunisia will have far fewer powers than Ben Ali or Bourguiba had. This is certainly one of the Tunisian Revolution's achievements.

The splendid palace in Carthage, with its 3,000 or so members of staff, does not exactly fit with the new role set out in the constitution for the new president. But this may be the least of the problems facing Tunisia's new head of state.

Beat Stauffer is a freelance journalist in Basel. His specialist area is the Islamic world and in particular the Maghreb.

Tourists have been returning to Tunisia, Egypt and Morocco. But, given the global uncertainty caused by the Ukraine war, will the comeback be enough to save a struggling sector, ... END_OF_DOCUMENT_TOKEN_TO_BE_REPLACED

By 2050, the Middle East and North Africa could be dealing with many more elderly people suffering from dementia. A lack of facilities, specialists and local knowledge means the ... END_OF_DOCUMENT_TOKEN_TO_BE_REPLACED

Tunisians are set to vote on a new constitution on 25 July. The prominent lawyer and women's rights activist Yosra Frawes fears the referendum could facilitate a return to ... END_OF_DOCUMENT_TOKEN_TO_BE_REPLACED

END_OF_DOCUMENT_TOKEN_TO_BE_REPLACED
Social media
and networks
Subscribe to our
newsletter