Although Hamid Karsai has been declared the winner of the election, the Afghan president is now himself seen by the West as a cause of great insecurity and western governments involved in Afghanistan will be making an even greater effort to find an alternative to him. Report by Andreas Zumach 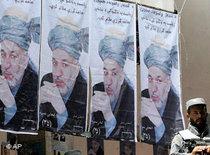 An election poster for Hamid Karsai in Kabul: there is growing doubt and profound scepticism in the West as to the suitability of the current – and probably next – president

​​ Hamid Karsai, president of Afghanistan since 2002, will in all likelihood be returned to office for the next five years too. This is the only thing which can be predicted with relative certainty about the presidential elections which entered their first round on Thursday 20 August.

When and under what circumstances Karsai will begin his second term of office is wholly uncertain. The suggestion that his re-election will finally bring more security and the chance of freedom to the war-torn country of Afghanistan is no more than a vague hope, used as a desperate rallying cry in official communiqués from Western governments who continue to back Karsai in the absence of any alternative.

Behind the scenes in Washington, London and Berlin – but also in Moscow, at the UN and among almost all independent observers – there is huge scepticism.

UN General Secretary Ban Ki Moon called on the Afghan population to participate en masse in the elections. In taking the time to vote, they would strengthen the democratic institutions and bring new energy to political life in the country, he said. Those responsible for the UN's political and humanitarian activities in Afghanistan doubt this will succeed however.

In an official letter in the second week of August the United Nations Assistance Mission in Afghanistan (UNAMA) stated that the "insecure situation" in Afghanistan had made preparations for the elections "extremely difficult" and led to "substantial restrictions on the right of assembly and free speech".

UNAMA head, Kai Eide, who also operates as Special Representative of the UN Secretary General for Afghanistan, had accurately predicted that "the insecure situation will have a substantial effect on voter turnout."

Even the UN special organisation responsible for "Relief, Recovery and Reconstruction in Afghanistan has no access to large areas of the country due to "widespread insecurity", said Eide's deputy Robert Watkins, who co-ordinates the UN's humanitarian activities, in a report issued at the same time.

Deals with clan leaders and warlords 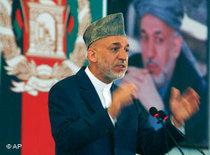 ​​ Eide and other UN representatives have publicly criticised Karsai, a Pashtun, for using bribery and the promise of positions to win the support of notorious warlords, drug barons and other individuals hardly qualified to "strengthen democratic institutions", as Ban Ki Moon put it, in order to secure a large enough following amongst the Tadjik and Uzbek populations, including the particularly brutal Uzbek militia leader Abdul Raschid Dostum.

How many of Afghanistan's 17 million citizens eligible to vote actually did so, and in how many of the 7,000 polling stations this was actually possible without intimidation and threats, will probably never be reliably determined.

"There are way too few Afghan election watchdogs and no foreign ones at all," complained Thomas Ruttig, a German expert on Afghanistan who has lived in Kabul for many years. Many regions remain unobserved. "It's impossible to say what is going on in these black holes," he said.

The threat of protests and unrest

This seriously undermines the credibility of the election results, not expected to be made public before 17 September. If Karsai is declared winner, it is not impossible that this will lead to violent unrest similar to that in neighbouring Iran.

As Karzai's popularity has sunk considerably since his 55.4 % election victory in 2005 there is now an increased likelihood that the president will not achieve the necessary absolute majority in this month's election and that a second ballot will be held in early October to decide between him and the former foreign minister Abdullah Abdullah, his most successful opponent. 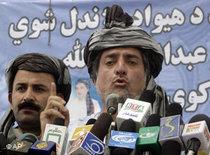 The most popular rival to Karsai is the former foreign minister Abdullah Abdullah. If Karsai fails to achieve an absolute majority they may be campaigning against each other in a second ballot in October

​​ Abdullah's campaign director was quoted in mid-August as saying that a defeat against Karsai would not be accepted. Alluding to the unrest following the presidential elections in Iran, he added that in Afghanistan the protests would not be so peaceful: "Everyone here has a Kalashnikov back home."

Surprises are of course not completely out of the question; it is possible for instance that, despite all fears to the contrary, both rounds of elections run peacefully with a high voter turnout, or that Karsai achieves a majority large enough that accusations of manipulation are impossible – if not in the first round, then six weeks later (with or without a period of unrest between polls).

But even then, will a further five years with Karsai as president bring a significant improvement to the situation? There are no indications that in future he will change his policies, heavily criticised even in western capitals. Quite the opposite: with his pre-election negotiations, job promises and manoeuvres, the president has arguably strengthened the potential influence of the warlords and drug barons, who have no interest in lasting peace and stability in Afghanistan, and thus increased his own dependence on these figures.

The search for alternatives

After the elections the US and other states involved in the Afghanistan Mission will thus be forced even more urgently to finally find an alternative to Karsai. This will involve not only finding a better person for the job of president; it will also involve a fundamental correction to the centralisation strategy opted for in Bonn, Germany, at the major Afghanistan conference in November 2001. 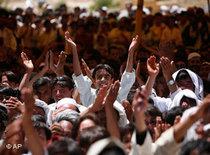 With massive rallies and TV duels, the Afghan people have experienced a real election campaign this summer, but it was always likely that many of the 17 million voters would stay at home due to intimidation

​​ There it was agreed that a central government should be established in Kabul under an interim president (Karsai) and that peace should be achieved initially in the capital, with the idea that the stability there would spread to the whole country.

This strategy failed pitifully however. It was never going to succeed – even if a better person had been found for the job of president – because never in the history of Afghanistan has there been a central government ruling from Kabul with the entire country under its control.

Even during the Taliban rule, which lasted till early 2002, this was not the case. Instead, real power lay, as it still does, with the local and regional tribal leaders and warlords etc.

Agreements on local and regional security

To acknowledge this historical fact would mean that the countries involved in the international mission would finally have to negotiate seriously with the people who actually wield power on a local and regional level – irrespective of their attitude to democracy and constitutional statehood or their religious convictions. The aim of such negotiations would have to be to reach agreements on local and regional security.

Only with such agreements could a framework be established to allow sustainable civic reconstruction measures and the substitution of the drug economy with credible alternatives for small farmers who currently live from opium poppy production.

UNAMA head Eide is quite right to demand that such negotiations are held not only with the "moderate" Taliban, but also with other Taliban factions and high-ranking individuals.

Such negotiations are in any case unimaginable under the current conditions of an escalating war, with US president Obama's recent clearly stated aim of achieving a military "victory" over the Taliban and Al-Qaida.

This aim has not yet been fulfilled and it is wholly unachievable in the future. If the US and its partners in Afghanistan persist with this failed strategy and continue thus to strengthen the Taliban still further Hamid Karsai is unlikely to last for five more years as president.

Andreas Zumach is UN correspondent for the Berlin newspaper Tageszeitung . His most recently published book, Die kommenden Kriege (The Upcoming Wars) is published in Germany by Kiepenheuer & Witsch.

A New Strategy for Afghanistan
Lessons Learned from Iraq?
Obama's new US strategy on Afghanistan is forcing the European states to make decisions. If they want to increase their influence, they will have to fulfil the tasks they are already doing much more effectively. By Guido Steinberg

Humanitarian Commitment in Afghanistan
"Keep out of the Way of Soldiers"
Every time that Reinhard Erös, a former Colonel in the Medical Corps of the German Army, travels to Afghanistan, his pockets are full of money – donations to help children in the Hindu Kush. He uses these funds to build schools in the east of the country. His most important rule is not to stand out as a foreigner. By Andrea Grunau

END_OF_DOCUMENT_TOKEN_TO_BE_REPLACED
Social media
and networks
Subscribe to our
newsletter