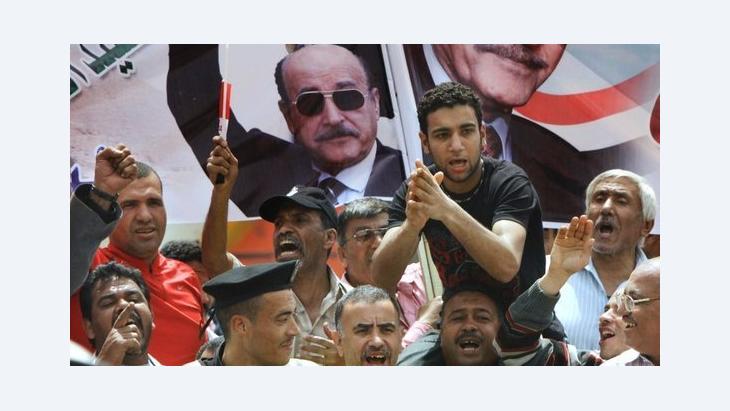 Presidential Race in Egypt
Political Power Games on the Nile

The political tug-of-war in the run-up to the presidential elections in Egypt continues despite the fact that the front-runners representing the Islamists and the former regime have been disqualified. Details from Karim El-Gawhary in Cairo

Things are growing increasingly turbulent in the Egyptian presidential election campaign. The key presidential hopefuls to date were Khairat El-Shater of the Muslim Brotherhood, Salafist Hazem Abu Ismail and Omar Suleiman, the former head of Mubarak's secret service. "Were", not "are", because with a stroke of the pen, the Egyptian election commission has now disqualified all three political heavyweights.

As grounds for its decision, the commission argued that the candidates had not meet the eligibility criteria. Muslim Brotherhood member, multimillionaire and businessman Khairat El-Shater was banned because he had been sent to prison for seven years under Mubarak for alleged money laundering. Four years into his sentence, El-Shater was pardoned by the military council immediately after Mubarak was toppled.

The bearded ultra-conservative Salafist Hazem Abu Ismail, whose supporters can be found mainly in the poorer districts and the countryside, was disqualified because his late mother was supposedly a US citizen.

Abu Ismail vehemently denies this, but the Egyptian Interior Ministry confirms that his mother originally entered Egypt with an American passport, and Saudi Arabia has verified that she took part in the Hajj with American papers. Word has also come from the US authorities that Abu Ismail's mother was in possession of an American passport.

Last week, the Supreme Administrative Court in Cairo asked the Egyptian Ministry of the Interior to look into the case and, if necessary, to issue a document ruling out the possibility that Abu Ismail's mother could have been a dual citizen.

Backed up by Egypt's election law 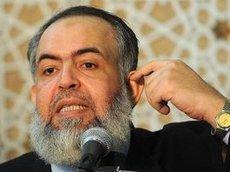 Although he enjoys great popularity, the ultra-conservative Salafist Hazem Abu Ismail has been disqualified because his late mother was supposedly a US citizen

​​Appointed by the military council, the election commission is made up of several well-known judges and is legally immune from the influence of the courts or the executive branch of government. It bases its decisions on Egyptian election law, which holds that convicted criminals as well as dual citizens or children of such are not eligible to run for president.

According to election law, each candidate must provide at least 30,000 authenticated endorsements of his candidacy. At least 1,000 signatures must be collected from each of the country's provinces. Suleiman allegedly submitted less than the required 1,000 from the province of Assiut.

Also affecting his candidacy is a law recently passed in parliament that forbids top officials from the last ten years of the Mubarak dictatorship from running for office again. However, this law must first be ratified by the military council before it comes into force. Omar Suleiman became Vice President shortly before Mubarak was deposed. In addition to the three front-runners, seven additional, less promising candidates were also disqualified.

The disqualified candidates had until 17 April to appeal the election commission's decision. El-Shater, Abu Ismail and Suleiman all declared that they would contest the ruling. The barred candidates – in particular Abu Ismail – are also threatening to send their followers onto the streets in protest.

Supporters of Abu Ismail already besieged election commission headquarters last Friday, necessitating the evacuation of the employees. "I'm expecting a major crisis to break out soon," threatened Nizar Ghorab, one of Abu Ismail's lawyers, in reaction to the commission's decision. "When the decision was made to disqualify me, they must have realised what the consequences would be. This is mobbing and trickery! And I won't stand for it", declared Abu Ismail himself on the TV channel Al-Hekma.

Omar Suleiman has in the meantime put his campaign on hold pending the final verdict, but expresses confidence that his appeal will be granted. Muslim Brotherhood candidate El-Shater, by contrast, has continued to campaign, unfazed by the ban. 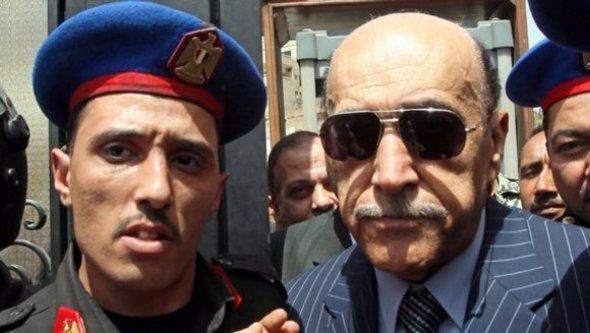 A conspiracy by the ruling military council? The election commission based its rejection of the one-time Mubarak official Omar Suleiman on his failure to collect enough signatures in one province

If the disqualifications prevail, the whole presidential campaign has been blown right open. Before the commission's decision, it looked as if either an Islamist or a representative of the old system would win the day. Now, however, there are three promising candidates in the running: Amr Moussa, former secretary-general of the Arab League; Mohammad Mursi, a Muslim Brotherhood backup candidate in case El-Shater proved ineligible; as well as Abdel Moneim Aboul Fotouh, who left the Muslim Brotherhood and has been able to raise support in liberal circles and amongst the "Tahrir youth".

Interesting here is that both the Salafists and the Muslim Brotherhood were already prepared for the eventuality that the candidacies of Abu Ismail and El-Shater might fail. The Brotherhood is now trying to rally its members around the substitute candidate Mursi, who does not, however, have the charisma of the disqualified El-Shater and is not popular with the group's younger members. Haitham Abu Khalil, a former Muslim Brotherhood executive, is even calling for Mursi's candidacy to be retracted because he has no chance of winning.

In the meantime, potential votes for the disqualified ultra-conservative Salafist Abu Ismail are already being redistributed. "His votes will go to the remaining Muslim Brotherhood candidate Mursi", hopes Ahmad Abel Rahman, member of the Brotherhood's Shura Council.

The Salafist El Nour Party has not yet proposed a new candidate to replace Abu Ismail. El Nour Member of Parliament Talaat Marzouk commented that the party is in close contact with the remaining Islamist aspirants. "The Salafists have a huge amount of support on the street. And we can help a candidate of our choice to win the election. But we will only do so for a candidate supporting an Islamic project," explained the speaker of the El Nour parliamentary faction, Ahmad Khalil.

Curiously enough, word from El Nour Party circles has it that the party is thinking about supporting the liberal Aboul Fotouh, a former member of the Muslim Brotherhood, instead. 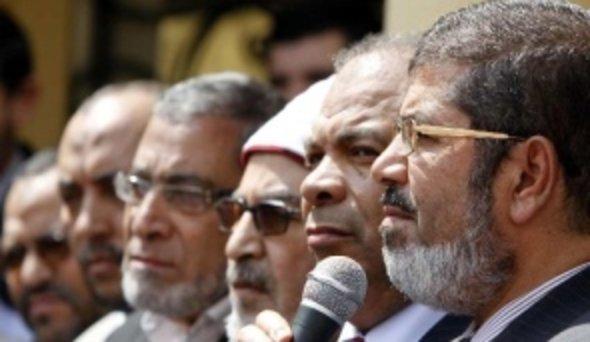 Replacement candidate and source of renewed hopes: the Muslim Brotherhood is trying to rally its members around Mohammed Mursi, who is less charismatic than the disqualified El-Shater and is not popular with the group's younger members

Views regarding the disqualified top contenders are naturally divided. Many liberals, but also Christian Copts, would be relieved to see the ultra-conservative Abu Ismail eliminated from the race and the Muslim Brotherhood weakened. In the revolutionary "Tahrir corner", people are happy that the administration has stopped Omar Suleiman, a hold-over from the old regime, in his tracks.

Others, however, view the matter as a conspiracy hatched by the ruling military council to retake control of the election process. Another widespread theory is that even Omar Suleiman's last-minute candidacy and subsequent exclusion from the race were rigged by the military, which in this way supposedly managed to subtly disable the Islamists; by disqualifying an official of the old regime at the same time, they put a damper on the potential political outcry.

Now that the political heavyweights have been barred from the race, it is time to ask a very important question: what will the reaction on the street be now that a large part of the political spectrum has been excluded from participating in the presidential elections?

This is the kind of major challenge faced by Egypt on its journey from dictatorship to democracy.

Home
Print
Newsletter
More on this topic
Presidential Candidate Abdel Moneim Aboul Fotouh: Egypt's Future Middle-Ground Man?The Arab Spring and the Failure of Egyptian Secularism: Opportunity MissedEgypt a Year after the Military Takeover of Power: From a Secular Uprising to a Muslim Democracy?Interview with George Ishak: ''We Need a New Revolution''
Related Topics
All Topics
Date:
Mail:
Send via mail

END_OF_DOCUMENT_TOKEN_TO_BE_REPLACED
Social media
and networks
Subscribe to our
newsletter