The former editor-in-chief of Indonesian Playboy magazine has begun a two-year prison sentence for "public indecency". And this in a country with the some of the most liberal media laws in Asia – since the toppling of Suharto. By Anett Keller 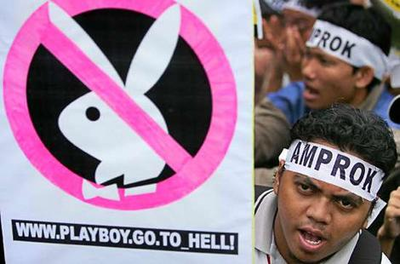 Guardians of decency: Indonesia's Islamic Defenders Front is often in the headlines for its violent attacks on dissenters, minorities and journalists

​​ When the first local edition of Indonesian Playboy hit the shelves in 2006, it made headlines across the world. The publication was seen as a litmus test for levels of tolerance in this majority-Muslim nation. At the same time, international commentators were disappointed that the magazine did not contain a single nude photo, and was therefore not provocative enough in their view.

But if some complained that there wasn't much to see, the conservative camp only saw red. Erwin Arnada, the magazine's former editor-in-chief, has been in prison since last Saturday. Indonesia's Supreme Court decided that two years in jail for "public indecency" would be an appropriate punishment for Arnada's publishing activities.

Among the Islamist groups that opposed the magazine, it was the Islamic Defenders Front (FPI) that repeatedly pushed for charges to be brought against the journalist. The hardline organization is often in the headlines for its violent attacks on minority groups in Indonesia. Immediately after Indonesian Playboy first appeared, the FPI threatened editorial staff to such an extent that publication offices had to be relocated to the majority-Hindu holiday island of Bali. The magazine was closed down after just a few issues.

For Arnada's defence counsel, the well-known media lawyer Todung Mulya Lubis, the sentence is an attack on the press freedom of Indonesia: "It's only a matter of time before other editors are criminalised for similar reasons. The sentence will create a climate of fear and self-censorship," explained Lubis in an interview with Qantara.de. 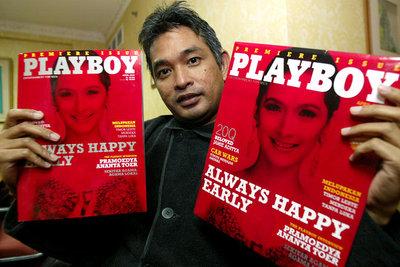 Erwin Arnada, Playboy magazine's former editor-in-chief, has been sentenced to two years in jail for "public indecency". "The sentence will create a climate of fear and self-censorship," says Todung Mulya Lubis, Arnada's lawyer

​​ The lawyer, who has lodged an appeal, is especially critical of the fact that judges considering Arnada's case based their decision on paragraphs in the code of criminal law, not media law.

Shadows of the past – and new threats

The Jakarta Post called the verdict a "wake-up call for all those who fear for the future of Indonesia's freedom and democracy." The newspaper said it showed just how the religious conservatives have consolidated their influence on the country's judiciary. "The Supreme Court is now firmly under conservative control," was the verdict of the largest-circulation English-language newspaper in Indonesia.

Since the process of democratization that began in 1998 following the ousting of President Suharto, Indonesia's media have enjoyed some of the greatest freedoms in Asia. But the ability to report freely on events is being repeatedly threatened by the shadows of the past, as well as new threats. 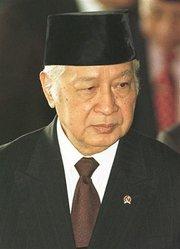 Since the ousting of President Suharto, Indonesia's media have enjoyed some of the greatest freedoms in Asia. But the ability to report freely on events is being repeatedly threatened

​​ Apart from the dominance of completely obsolete and Draconian paragraphs contained within the penal code and applied in consideration of charges against the media, reporters are finding themselves living with the increasing threat of physical violence.

Three journalists were killed this year as they went about their work. The Alliance of Independent Journalists (AJI) recorded 40 cases of violence against journalists by August 2010 alone – in comparison to 38 cases in 2009 as a whole. With the annual press freedom rankings published by Reporters Without Borders putting Indonesia 101st (out of 175), an inglorious position for a democracy, the country looks unlikely to improve on this state of affairs.

A glimmer of hope at the Constitutional Court

Just this week however, there was a glimmer of hope. On Wednesday, the Constitutional Court ruled that a 1960s law repeatedly cited by state prosecutors to ban disagreeable books, was unconstitutional. Historians, writers and human rights activists were jubilant.

But it would be inaccurate to interpret this as evidence that the Constitutional Court is not yielding to the influence of the conservatives. When the questions at stake are religious, then the reality looks quite different.

Last April, the guardians of the constitution upheld a controversial blasphemy law that makes it a criminal offence to "distort" any of the six standard faiths recognised by Indonesia, ruling that the law was vital to religious harmony. The 1965 law had been challenged by a coalition of organisations as discriminatory. Supporters of various radical Islamic groups had threatened to stage protests if the court overturned the law.

Religious Violence in Indonesia
Shattered Faith in a Peaceful Coexistence
In Indonesia, attacks by the extremist IDF against religious minorities are occurring with greater frequency. But despite religious freedoms enshrined in the constitution, authorities are responding with ambivalence and President Yudhoyono is reacting hesitantly to the latest violence. Anett Keller reports from Jakarta

Hizb ut-Tahrir in Indonesia
The Caliphate as an Extension of Democracy?
The extremist organisation Hizb ut-Tahrir rejects both democracy and the existence of the nation state. A conference, held recently in Jakarta, showed that representatives of moderate Muslim organisations were reluctant to take clear positions on the issue. By Bettina David