Countries like Saudi Arabia, Egypt, and Turkey have not faced major consequences and nor have they weathered international backlash for their repression and manipulation of the media. This has not only emboldened their repressive regimes; it has convinced other governments currently facing protests to use similar methods.

In Iraq, the government has blamed the media for promoting the popular frustration driving large-scale demonstrations against widespread corruption, high unemployment, poor public services, and Iranian interference. In November 2019, the media regulator blocked transmissions from Dijlah TV, a Jordan-based Iraqi broadcaster, and temporarily shut down its Baghdad offices, along with those of 11 other media outlets, over alleged violations of licensing rules. It also issued warnings to five other organisations to "adapt their discourse" about the protests to broadcasting rules.

Journalists have also been detained by security services and targeted by associated militias. Last year, unidentified armed assailants invaded the Baghdad offices of four broadcasters, ransacking studios and offices, stealing equipment and assaulting employees. The government has cut Internet service numerous times during the protests, at significant cost to the Iraqi economy. 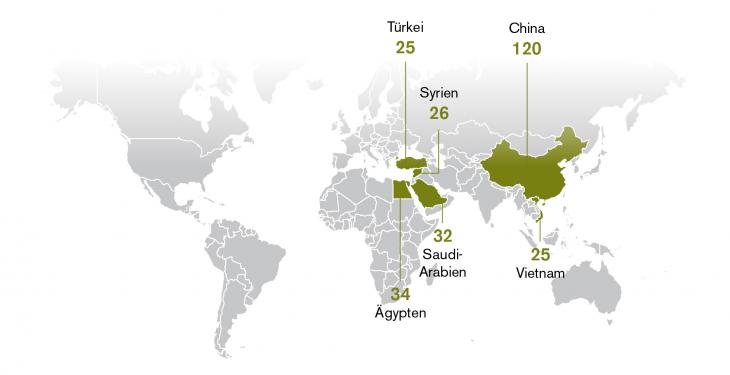 Saudi Arabia and Egypt, topping the Arab world's media repression league table: according to "Reporters Without Borders", the majority of detainees in both countries are in prison without trial or charge. If a trial does take place, journalists and bloggers there are often sentenced to very long prison terms in grossly unfair trials. Even those released from prison are often subjected to massive reprisals

Intimidation or arrest in Lebanon

In Lebanon, often viewed as an oasis of media openness in the region, the government has increasingly been intimidating and arresting its critics in an effort to subdue the demonstrations that began in October 2019. Protesters’ complaints about the government’s failings – including its capture by an elite political class – can easily be twisted into charges of fomenting sectarianism, which is illegal under the constitution. Defamation is another charge used to discredit protesters and journalists.

Supporters of the country’s ruling parties have marshalled their forces to intimidate protesters and pressure service providers to shut down the social media accounts of protest leaders and prominent journalists. Those accounts are crucial because mainstream Lebanese media, controlled by political parties, have barely covered the protests. Politically controlled news outlets have also spread disinformation and claimed that foreign powers backed the protests in an attempt to weaken Lebanon.

Yet both the Lebanese and Iraqi governments have been markedly less successful than their authoritarian neighbours at using information-suppression tactics to keep citizens in line. Demonstrators seem intent on keeping up the fight until their governments genuinely respond to their demands, and media suppression has only served to highlight alternative media and communication channels.

Autocratic regimes have long understood that discrediting or suppressing the press is easier and more effective than using violence to maintain power, even if that control comes at the expense of the openness and economic dynamism that these countries desperately need. But the experiences of Iraq and Lebanon suggest that this approach has its limits. Although both countries face deep structural challenges, and journalists, writers, and intellectuals remain at risk, their political systems’ dependence on power-sharing arrangements has prevented dissenting voices from being entirely silenced.

In the Arab world, freedom of opinion collides with a societal juggernaut that silences imagination with remarkable efficiency. Egyptian author and novelist Khaled al-Khamissi ... END_OF_DOCUMENT_TOKEN_TO_BE_REPLACED

This 11 September marked the nineteenth anniversary of the terrorist attacks in New York and Washington. The wide-ranging repercussions of those attacks in the years since 2001 ... END_OF_DOCUMENT_TOKEN_TO_BE_REPLACED

The rise of liberation movements in the Arab World during the 20th century brought with them an array of complimentary works from the creative sector. Sultan Sooud Al Qassemi ... END_OF_DOCUMENT_TOKEN_TO_BE_REPLACED

Two prominent cases concerning gender-based violence – that of Ahmed Zaki, who has been accused by more than 100 women of extortion, sexual harassment, coercion and rape, and that ... END_OF_DOCUMENT_TOKEN_TO_BE_REPLACED

Alexandra Kinias was denied a job as a site engineer in an oil company because of her gender. The rejection letter clearly stated that the company would rather offer its jobs to ... END_OF_DOCUMENT_TOKEN_TO_BE_REPLACED

END_OF_DOCUMENT_TOKEN_TO_BE_REPLACED
Social media
and networks
Subscribe to our
newsletter