Lebanon's Hezbollah-backed prime minister-designate, Najib Mikati, will take office at a difficult juncture. He must try to bring representatives of rival camps to the table to form a new government. The next round of domestic conflict seems inevitable. Birgit Kaspar in Beirut has the details

​​Tyres burn in the streets of Beirut and in the north Lebanese city of Tripoli. Agitated youths chant "Sunni blood is boiling!" and "By our soul, our blood, we sacrifice ourselves for you, Saad!"

On what was dubbed a "day of anger", hundreds took to the streets when it became clear that President Michel Suleiman would ask Sunni businessman Najib Mikati to form a new government. The protests against this "Hezbollah coup" were instigated by MPs belonging to Interim Prime Minister Saad Hariri's Future Movement.

Lebanon once again finds itself deep in a political crisis, faced with a range of conflicting interests. At the centre of the current battle is the Special Tribunal Hariri called for in 2007 with the help of the UN to investigate the assassination of his father, former head of state Rafik Hariri.

Hariri Senior and 22 others were killed when a car bomb exploded in February 2005. The chief prosecutor at the Special Tribunal in The Hague recently submitted the first indictment, the contents of which will, however, not be disclosed until confirmed by the pre-trial judge. According to reports, the indictment charges Hezbollah members with playing a role in the assassination – an involvement that Hezbollah chief Hassan Nasrallah categorically denies.

Nasrallah has characterised the Hariri tribunal as a US-Israeli plot to discredit his "Party of God", demanding that the Lebanese government cease to cooperate with the investigation.

When Saad Hariri refused to deny the tribunal his support, despite attempts at mediation by Saudi Arabia and Syria, eleven cabinet ministers aligned with Hezbollah resigned, toppling the 14-month-old Hariri government. The media reported that although Hariri had initially agreed to many of the provisions of the Saudi-Syrian compromise package, he then backed down again with support from Washington.

Now Mikati, a 55-year-old billionaire from the Sunni stronghold of Tripoli, is faced with the challenge of putting together a new cabinet. An unwritten law dictates that the prime minister of Lebanon must always be a Sunni Muslim, the president a Christian and the speaker of parliament a Shiite.

Forming a government will not be easy, says sociologist Talal Atrissi, who has close ties with Hezbollah. "But the country can't just be left in a vacuum." Mikati, who has good connections with Syria and Saudi Arabia, has support from Damascus, Ankara, Tehran, Doha and Paris. And even the Saudi king, whose man Saad Hariri actually is, did not seem to have anything against Mikati. So his chances are not all that bad.

Mikati, who sees himself as a consensus figure and not as the candidate of Hezbollah, declared after his nomination that he would extend his hand to all Lebanese. "I will form a government that will protect the national unity and sovereignty of Lebanon."

​​Saad Hariri has, however, already indicated that he will not participate. No one in Lebanon has any doubt that one of Mikati's most urgent tasks will be to end the country's cooperation with the Hariri Special Tribunal. Otherwise, the opposition, which now holds the majority in parliament, would never have nominated him as premier, points out Atrissi. "For the opposition, breaking with the tribunal is the most important issue."

Thereafter, Mikati can follow a policy of national unity, but first the problem of the tribunal must be solved, says Atrissi. No easy feat, notes columnist Rami Khouri. "But it seems as though that's exactly what the majority wants, and if they have the votes in parliament, that's probably what they'll get." But Mikati will try to do it in a way that cushions the domestic policy impact, says Khouri.

The image of Hezbollah in the region as a Shiite resistance movement against Israel that nonetheless acts across all denominations has already suffered as a result of the suspicion that it may have been involved in the Hariri assassination in 2005.

Should the Special Tribunal in The Hague press charges supported by credible evidence, then the "clean" image of the Shiite militia, which is on the US list of terrorists, will be further tarnished – probably not in the eyes of its legions of loyal supporters, but in the estimation of many sceptics in Lebanon and the region.

Hezbollah wants to mitigate this effect by causing Lebanon – that is, the country that demanded the Hariri tribunal in the first place – to suspend its cooperation, on the grounds that the court has lost its credibility. Karim Makdisi, political scientist at the American University in Beirut, explains: "The attitude of Hezbollah is: as long as we have credibility and legitimacy in our own country, we don't care what the American-Zionist conspirators say about it."

How Washington and Europe will react to the Mikati government, which after all is shored up mostly by Hezbollah, remains to be seen. In view of the respect commanded by the designated prime minister, it will presumably be difficult to characterise him as a marionette. The telephone tycoon from Tripoli enjoys a high degree of credibility amongst the Lebanese, even though he can hardly be considered the natural Sunni leader. 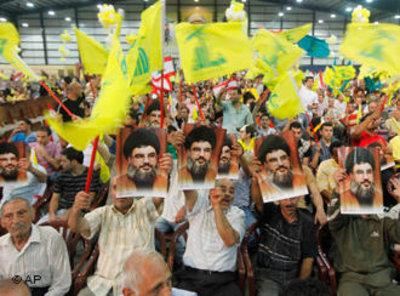 "Should the Special Tribunal in The Hague press charges supported by credible evidence, then the 'clean' image of the Shiite militia, which is on the US list of terrorists, will be further tarnished," writes Birgit Kaspar

The events of the past weeks indicate that Lebanon has arrived at a decisive turning point. Since the assassination of Rafik Hariri in 2005 and the forced withdrawal of Syrian forces shortly thereafter, Lebanon has been ruled by a predominantly pro-Western cabinet, albeit not a very effective one. Hezbollah has been a major force behind the scenes since 2008.

Now the "Party of God" and its allies have gained even more influence. "I think we are today embarking on a new era", Khouri says. This is the consequence of a system in which battles for power are fought on the basis of a combination of military strength and parliamentary votes. Khouri: "What's fascinating is how this situation has come about through a clean, constitutional process that reflects a strong growth in power for Hezbollah."

It seems like Najib Mikati, if he succeeds in forming a halfway balanced government, has good chances of temporarily calming the waters in Lebanon. All the same, he will not be able to solve the country's core problems, because the four million Lebanese – who are divided roughly into three equal groups of Christians, Sunnis and Shiites – have differing visions of their homeland that apparently cannot be reconciled.

The followers of the pro-Western alliance surrounding Sunni leader Saad al-Hariri want to live in a prosperous nation, a "paradise for business people and tourists".

Supporters of the Shiite Hezbollah see their primary mission as upholding armed resistance against Israel in order – as they say – to defend Lebanon's freedom and prevent American-Israeli hegemony in the Middle East.

The Christians, for their part, are divided.

It is only a matter of time before the next round of the conflict begins.

In 2003, Birgit Kaspar was head of the ARD's Middle East (radio) studio in Amman. She now works as a correspondent for the "Weltreporternet" network of journalists from Beirut.

The Future of Hezbollah
Hemmed in on All Sides
Given rising tension with Israel and possible indictments of its operatives by the international tribunal investigating the assassination of former Prime Minister Rafic al-Hariri, Lebanon's powerful Shia political and paramilitary organization has never looked more uncertain. By Paul Salem

Syrian-Lebanese Relations
End of the Ice Age
Five years after the assassination of the Lebanese ex-prime minister al-Hariri, relations between Syria and Lebanon have improved: initial highly symbolic visits are taking place, and ambassadors have been exchanged. Birgit Kaspar has the details from Beirut

END_OF_DOCUMENT_TOKEN_TO_BE_REPLACED
Social media
and networks
Subscribe to our
newsletter