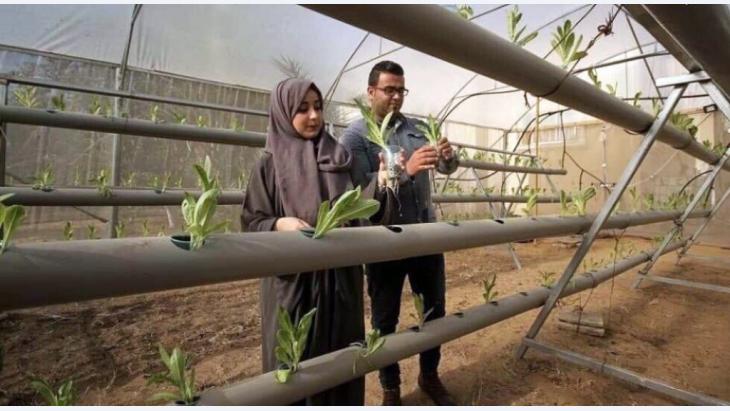 As he sees the first of his successes making its way towards local markets, Azem Abu Daqqa feels very positive. The launch of an agricultural project in the south of the Gaza Strip, which challenges the reality of the Israeli blockade and the scarcity of job opportunities for the thousands of university graduates in this coastal area is promising. He isn't the only one to have seized the initiative. Fida Abu Elayyan, a pharmacist, is doing something very similar. A report from Gaza

Not long ago, Azem Abu Daqqa, an agricultural engineering graduate, got ready to grow three thousand lettuce seedlings in a 200-square-metre greenhouse using hydroponics, which is a little used technology in the Occupied Palestinian Territories.

Abu Daqqa and his sister, Safiyya, who specialised in the same subject at university, were able to bring to market the first crop which was planted almost a month ago, after starting from scratch last January.

According to Abu Daqqa, he made a satisfactory financial return on his investment and he is now looking to expand the project in the coming days.

The advantages of hydroponics

Abu Daqqa explains that the yield from his 200 square metres (approx. 0.2 dunums) is equivalent to what can be produced from 1.5 dunums of agricultural land using traditional farming methods.

Thus, one of the advantages of hydroponics is, as he says, that the crop is ready for harvest almost two and a half times faster. What's more, the yield is double that produced by traditional farming.

Growing plants in water ("hydroponics") is a new agricultural technique in the Gaza Strip. It does not need soil and uses almost 90% less water than conventional agriculture.

According to the Union of Agricultural Work Committees, the technique is especially important in the Gaza Strip, which suffers from a lack of water and diminishing space for agriculture. It will also provide both more and safer food since it does not rely on pesticides and industrial hormones which are needed to treat the soil.

In the case of the two Abu Daqqa engineers' project, the concept is to prepare an iron stand, across which broad iron tubes lie diagonally. This allows water to come into contact with the roots which are placed in perforated plastic cups; the cups collect water and allow the roots to expand outward.

Next, water is pumped into the pipes and circulated in an enclosed circuit. The used water is recycled back to the stock tank, and oxygen, which is necessary for the plants, is added. 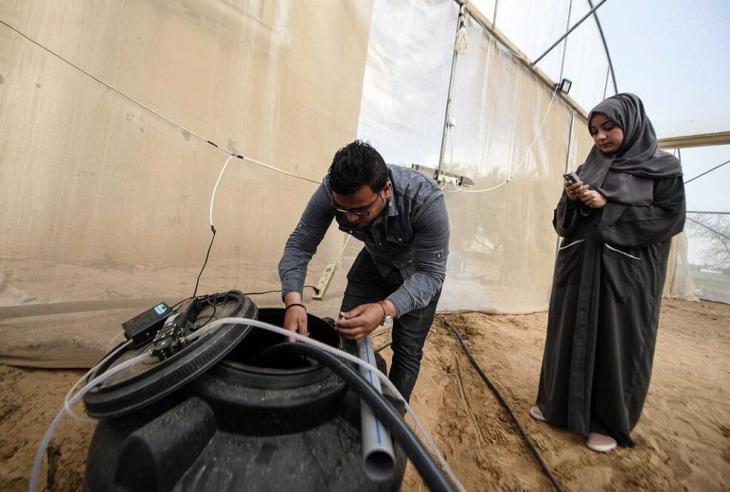 Growing plants in water ("hydroponics") is a new agricultural technique in the Gaza Strip. It does not need soil and uses almost 90% less water than conventional agriculture. According to Azem Abu Daqqa, their first crop of lettuce was ready for harvest almost two and a half times faster than with traditional farming methods. What's more, the yield is double. Pictured here: Safiyya and Azem Abu Daqqa in their greenhouse in the Gaza strip


Abu Daqqa continues: "In this system, we use neither pesticides nor chemical fertilisers, unlike in traditional agriculture. We use natural nutrients to nourish the seedlings."

In hydroponics, lettuce seedlings are cultivated without soil. Seedlings are placed in perforated plastic bags in between volcanic rocks which fix the roots and humidify the environment, according to Abu Daqqa.

Among the three types of crops produced by means of hydroponics, Abu Daqqa is currently focusing on summer leaf crops such as lettuce. He intends to move on to cultivating fruits, in light of the success of his first experiment. At the same time, he can see that root vegetables require more sophisticated techniques, which are beyond his current capabilities.

The Ministry of Agriculture in Gaza has already affirmed its support for hydroponics in order to make the most of the water, fertilisers and farmland against the backdrop of the expanding urban sprawl and the rising demand for water and resources for the growing population.

"Every beginning is difficult", as Abu Daqqa says, and he acknowledges that things were "extremely difficult" at the start, beginning as they did from nothing. However, he praises the support he received from his family, friends and two experts whom he consulted about his idea.

He adds: "At the outset, there were some things I couldn't get as they aren't available in Gaza, such as ready-made perforated cups. I therefore resorted to manually punching a hole in some three thousand cups in order to plant a similar number of lettuce seedlings". He describes the task as arduous.

Abu Daqqa explains that hydroponics involves high set-up costs at the beginning of the project compared to traditional agriculture, but its advantages become clear once the project gets off the ground in terms of lower expenses, since it requires less water, less time and less labour.

He also points to other obstacles such as the lack of nitrogen fertilisers that are beneficial for plant growth – Israel prohibits them from entering the Strip on the pretext of security.

Abu Daqqa's project benefits currently from funding from the German Federal Ministry for Economic Cooperation and Development (BMZ) in partnership with Save the Children International. It is also helped with its project implementation by "Save Youth Future Society" (SYFS).

For 13 years, Israel has prevented thousands of Palestinians in the Gaza Strip from travelling abroad to promote their initiatives or to keep abreast of developments in their various areas of specialisation. At the same time, Israel prevents experts and specialists from entering the Strip in order to train Gazans, especially university graduates. 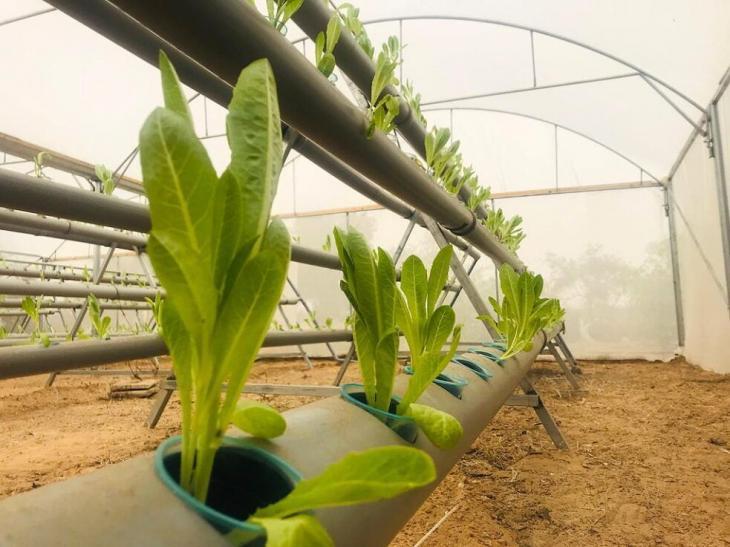 Azem Abu Daqqa explains that hydroponics involves high set-up costs at the beginning of the project compared to traditional agriculture, but its advantages become clear once the project gets off the ground in terms of lower expenses, since it requires less water, less time and less labour.

The Israeli blockade served as a huge barrier to the repeated attempts by this one particular graduate of the College of Pharmacology to import simple devices from abroad to extract oils from seeds. This motivated Abu Elayyan to do exhaustive research about the device via the Internet, including how it was put together and how it operated, to the point where he successfully copied it using local tools.

He also began to cultivate a plot of land with various herbs, medicinal and aromatic plants, using organic farming methods free of chemicals. Subsequently, he began extracting oils from those herbs.

Abu Elayyan is especially proud of his success in extracting sesame oil, which is in great demand in Gaza for use in the treatment of children and for colds.

He confirms that this device is merely a first step towards a factory for the production of medicinal oils. He is hoping to nurture and develop the idea further so that it can serve Gaza's population. The Strip is rich, Abu Elayyan adds, in medicinal and aromatic plants, because its climate is well suited to their cultivation.

As for Abu Daqqa, the first impetus for the idea of hydroponics was his firm belief that everyone should have his own calling to distinguish him from others and should make the best of what he has, wherever he is. It was this logic which led him to hydroponics, in line with his university major.

Abu Daqqa believes that the idea of hydroponics, like urban agriculture, could be translated more widely across the Gaza Strip, but it needs proper planning and enough time.

In any case, as Abu Daqqa emphasises, a project like that would require institutional backing. It would also need, before it could proceed, a campaign to persuade traditional farmers to switch to hydroponics technology by means of preliminary trials, support, training and awareness.

As for Abu Elayyan, he advises Gaza's young not to despair or to surrender to the miserable reality before them, but instead to leave behind marks of success during their lifetimes. Despite all the difficulties, Gaza "is a land of plenty", as he puts it.

This article was first published in Afaq Magazine, the leading environmental magazine of Palestine/ Gaza

The outpouring of solidarity worldwide following the violent death of George Floyd should prompt us to step back and fundamentally question racist structures and privileges based ... END_OF_DOCUMENT_TOKEN_TO_BE_REPLACED

Mikhal Dekel’s father was part of a contingent of Jewish children who went on an odyssey from Poland to Iran as a result of the Holocaust. Dekel has now written a book exploring ... END_OF_DOCUMENT_TOKEN_TO_BE_REPLACED

From Syrian war crimes to U.S. hypocrisy in the Julian Assange case, the global "erosion of human rights standards" is of critical concern, UN Special Rapporteur on Torture Nils ... END_OF_DOCUMENT_TOKEN_TO_BE_REPLACED

Turkey is the second-largest exporter of TV series in the world, boasting a growing presence on international screens from Pakistan to Chile. The "dizis" offer audiences an ... END_OF_DOCUMENT_TOKEN_TO_BE_REPLACED

There were signs of a return to something akin to normality at the weekend as mosques in Saudi Arabia and the Al-Aqsa mosque in Jerusalem re-opened for the first time since COVID- ... END_OF_DOCUMENT_TOKEN_TO_BE_REPLACED

Jordan is not only waging a vigorous battle against coronavirus, but also against the Middle East peace plan proposed by U.S. President Donald Trump. By Birgit Svensson END_OF_DOCUMENT_TOKEN_TO_BE_REPLACED
Date:
Mail:
Send via mail

END_OF_DOCUMENT_TOKEN_TO_BE_REPLACED
Social media
and networks
Subscribe to our
newsletter