Prix Goncourt for Atiq Rahimi
Breaking with the Language of Taboo

Writer and film director Atiq Rahimi is the surprise winner of this year's French Prix Goncourt, one of the world's most prestigious literary awards. His dark stories reflect the drama of his own life. A portrait by Martin Gerner 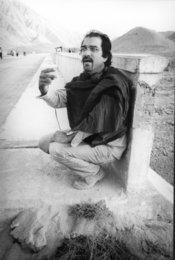 ​​ The sweeping brim of his natty Borsalino, the scarf draped elegantly around the neck, the neatly trimmed moustache: Atiq Rahimi looks every inch the modern musketeer, the epitome of the French sense of style and sophistication. The 46-year-old certainly does not disdain the good things in life – he is both intellectual and bon vivant. Rahimi holds both Afghan and French citizenship. "When I'm in Afghanistan I become French, in France I'm Afghan."

It is certainly the case that Rahimi's literature defies categorisation in national terms. His novels deal with the human drama between war and peace, with the suffering and trials that the individual must endure. "Syngué Sabour – la pierre de patience" (the stone of patience), his prize-winning novel, tells through a hauntingly insistent monologue of the sadness and fears of a woman who loses her war-ravaged husband, whilst, at the same time, giving shocking and harrowing expression to all of her hatred against a system of political and religious oppression.

The president of the jury described the book "as short but very dense." The novel's opens with the line: "Somewhere in Afghanistan, or elsewhere." As in "Earth and Ashes", the story successfully filmed in 1996 by Rahimi himself, the focus here is on global human tragedy. The Afghan women symbolically become all the women of the world, with their wishes, dreams and hopes. "I hope that my book will be read in Afghanistan too," Rahimi says .

Innate inhibitions of the native tongue

​​ The novel is currently only available in French. The German edition, to be published by Ullstein, is due out in Autumn 2009. "Syngué Sabour" represents a first for Rahimi in that he has chosen to write it in French the language of his adopted country. "I got to know the world through the Persian language, so for me it is often connected with taboos, limits and prohibitions," Rahimi recently explained.

"So a kind of involuntary self-censorship has come in to play when I've written in Persian. My acquired language, the one I have chosen, gives me a kind of freedom to express myself, away from this self-censorship and an unconscious shame that dwells in us from childhood."

Atiq Rahimi worked on "Syngué Sabour" for two years, an "impulsive act," as he calls it, to track down his own "anger and inner pain."

The essential power of poetry

Atiq Rahimi comes from a well-to-do family. It was not unusual in the family to hear citations from the classics of world literature. The expressive power of poetry was something he learned about from an early age and understood also that this power had practical applications. "We need schools and hospitals for our minds and for our bodies. But if we are to regain our souls, we need more poetry."

The horror behind – scene from Earth and Ashes, filmed in 2004 in original locations

​​ His father went to a German school in Kabul and was governor of the Panshir Valley district. Rahimi himself attended the French Lycée Esteqlal. In 1973, King Mohammed Sahir Shah of Afghanistan was deposed in absentia and forced to while away his days in Italian exile until 2002. It was a time that would also see the break up of Atiq Rahimi's family. His father was arrested and imprisoned for three years; his older brother turned to Communism and tried, vainly, to convince Atiq to follow his example.

In 1984 Rahimi decided it was time to leave his home country. He travelled via Pakistan to France where he was given political asylum. In 1990, 18 months after the event, he learned that his brother, who had remained in Afghanistan, had been murdered. Rahimi was already submerging himself in French culture by this time, with Alain Resnais's "Hiroshima, mon amour" and the writings of Marguerie Duras two of the many important milestones.

Freed from the Machiavellianism of politics

Intellectual, activist and bon vivant: Atiq Rahimi during filming of "Earth and Ashes", a French-Afghan co-production

​​ Atiq Rahimi sees himself as a cultural rather than a political refugee. "I can't hold political speeches or put forward political justifications, because in politics everything can be justified," revealed the author in an interview.

Rahimi studied at the Sorbonne in Paris, where he later took his doctorate and shot his first documentary film. His film of "Earth and Ashes" (Chakestar o chak) took the "Un Certain Regard" prize at the 2004 Cannes Film Festival. For many it is a film that proves that, despite his years in exile, Rahimi has not lost touch with the ways of thinking and feeling of his homeland.

As far as the future of his country is concerned, Atiq Rahimi is a realist. "As long as the international forces in the region have no clear global strategy it is going to be difficult to bring peace to Afghanistan." Evil needs to be tackled at its source. Intervention in the form of protective military operations in Afghanistan will not do much."

The author does not believe that negotiating with the Taliban is the answer either, "because the Taliban will never accept the conditions for such negotiations."

He has been regularly travelling back and forth between France and Afghanistan since 2002. "I've established writing workshops in my home country for 300 young people. They are taught general writing skills, but also how to write a screenplay. We even got an Afghan soap opera started on television. The fight is going on inside the country, in alliance with the young people."

Martin Gerner is a journalist with many years experience in Afghan affairs. He is also involved in promoting cultural exchange between Afghanistan and Germany including in his role as director of the Afghan Film Festival in Cologne. In 2005 he brought Atiq Rahim to the festival for a screening of his film "Earth and Ashes".

Interview with Siddiq Barmak
The Front Lines
In 2003, film director Siddiq Barmak shot the first highly-acclaimed Afghan feature film based on the rule of the Taliban. The film,"Osama", received a series of awards and accolades. The film marked the return of Afghan culture on the international stage. Siddiq Barmak just completed shooting on a new feature-length film project, entitled "Opium War". Martin Gerner spoke with him in Kabul

END_OF_DOCUMENT_TOKEN_TO_BE_REPLACED
Social media
and networks
Subscribe to our
newsletter