But he mainly gets hostility from right-wingers, says Hermann. It is possible to have a dialogue with conservative Muslims, where he can score points with his expert knowledge. But perhaps, he says, he just isn’t famous enough yet to provoke a lot of opposition. His Facebook page has around 650 "likes" and some 720 followers. It’s hard to estimate how many people he reaches.

Hermann is – as yet – an imam without a mosque, his community scattered right across Germany. He attends Friday prayers as a guest at a different mosque in Berlin every week, getting to know various imams and communities.

Creating change within the Muslim community

He wants to make his presence known with the label "gay imam", looking to have that conversation with people and create change from within the Muslim community. At the same time, he sees himself as someone for gay Muslims to speak to, and is spending a lot of time building up a network in Berlin’s LGBTQI scene.

The Islamic studies scholar Andreas Ismail Mohr is interested in Hermann’s work, and regularly publishes on the topic of homosexuality in Islam himself. Hermann has honest intentions, he says, and is doing some good work – but in Mohr’s eyes, he isn't an imam. "An imam is someone who regularly leads prayers with a group and has theological expertise." The title isn’t protected, but he would still advise Hermann to distance himself from it. That would also leave him less open to attack. 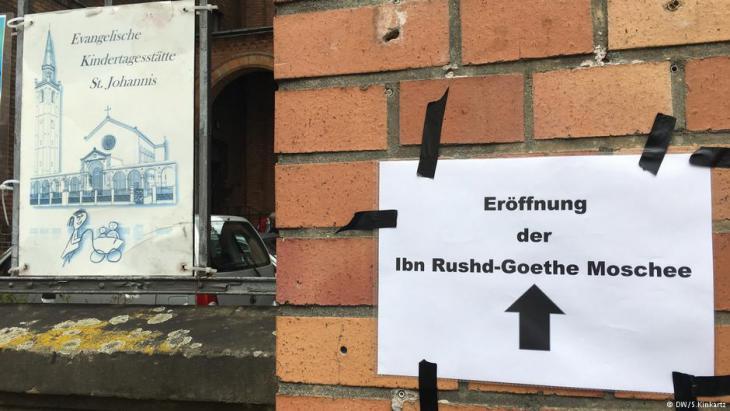 A late convert: Christian Awhan Hermann found his way to Islam in 2017, in the Ibn-Rushd-Goethe mosque of women’s rights activist and female imam Seyran Ates. In her mosque, men and women pray together, and she welcomes both gay people and Muslims of different denominations

The activist life suits him; he likes to stand out with his full grey-brown beard and traditional Pakistani dress, a beige-brown striped tunic and trousers, and blue trainers with orange laces. During prayers he wears a taqiyah, the Muslim head-covering for men. He has largely abandoned his jeans and t-shirts. He says this is because he feels "connected to the east". He pulls his "mobile mosque" around with him: a blue-checked suitcase with wheels, containing a laptop, prayer mats and textbooks for religious instruction.

From Hermann’s appearance, few people would guess that he only converted two years ago. He left school at 18 and did an apprenticeship as an industrial management assistant. After taking one look at church-tax salary deductions, he left the Protestant church. But God has always played a role in his life, he says.

Looking outwards with the knowledge from within: a conversation with the Iraqi writer Sinan Antoon on the future of his homeland. Interview by Lena Bopp END_OF_DOCUMENT_TOKEN_TO_BE_REPLACED

Political analyst Taqadum al-Khatib argues that Egypt can, in co-ordination with its European partners, develop a common vision to solve the complex conflict in Libya. For this to ... END_OF_DOCUMENT_TOKEN_TO_BE_REPLACED

At the suggestion of his Arab students, Israeli psychologist Ofer Grosbard created the project "Quranet", which uses texts from the Koran to solve educational problems in schools ... END_OF_DOCUMENT_TOKEN_TO_BE_REPLACED

Libyans have mixed feelings about the EU. On the one hand, they admire what Europeans have achieved, but on the other, they feel let down. Moutaz and Walid Ali report from Tripoli END_OF_DOCUMENT_TOKEN_TO_BE_REPLACED

Turkey's President Erdogan wants to create a second Bosphorus. The cost to the economy and environment would be enormous – and that's why Istanbul's mayor is attempting to stop ... END_OF_DOCUMENT_TOKEN_TO_BE_REPLACED

Libya is in turmoil and no political solution is in sight. The EU's inability to take concerted action in the country, meanwhile, is being exploited by third parties, such as ... END_OF_DOCUMENT_TOKEN_TO_BE_REPLACED
Author:
Anna Fries
Date:
Mail:
Send via mail