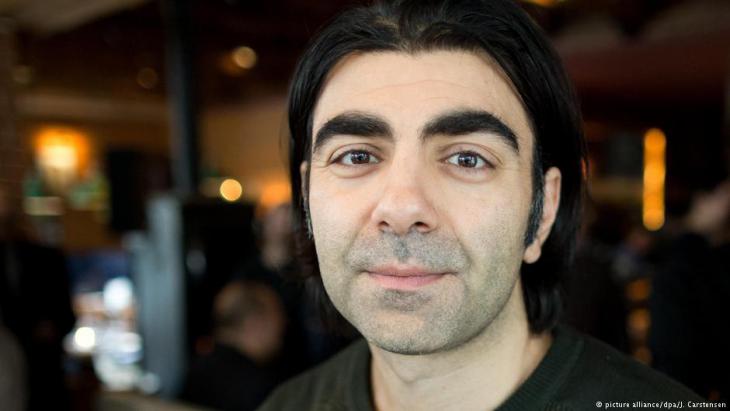 ″Aus dem Nichts″ (In The Fade) is about a young mother who loses her husband of Turkish origin and her son in a bomb attack. The investigations focus on a young neo-Nazi couple, but the mother, who is played by Diane Kruger in her first German-speaking film, wants to get to the bottom of the tragedy herself.

It is all about truth and justice, ″both in the constitutional and in the moral sense″, as Akin stated in an interview with the Tagespiegel newspaper and about showing how ″contradictory and flexible″ these concepts can be.

The beat of the problem ″hood″

Like almost all the films Fatih Akin has made since his raging debut, ″Kurz and Schmerzlos″ (Short Sharp Shock) in 1998, ″Aus dem Nichts″ (In The Fade) is also about what happens when different cultures collide. It is also the underlying theme in the life of this director who grew up as the son of Turkish immigrants in Hamburg.

Born on August 25, 1973, he grew up in a problem ″hood″ teeming with violent youth gangs – it was this volatile milieu that has spawned the impetuous energy of his films. Akin began his career in films as an actor. He soon got fed up, however, with being typecast in roles as a Turkish criminal, so he started to write scripts. Inspired by Martin Scorsese films like ″Taxi Driver″ or ″Mean Streets″, he soon realised he had enough material as a young man in his own environment to write similar stories.

Ever since, his films have consistently lived from his own observations and personal experiences. In this way, they achieve an authentic and immediate truthfulness – a truthfulness that hit the German cinema of the late nineties and early noughties with full fury.

Reconciliation rather than confrontation

Impulsive, raw and wild – these are the words to describe the first films of this self-taught director, who is equally as well-versed in the direct reality of life as he is in film history. His first great masterpiece, ″Gegen die Wand″ (Head-On) in 2004, tells the story of the urge for freedom of a German-Turkish woman, Sibel (Sibel Kekilli) and how her needs collide with the traditions of her strict Turkish family. She enters into a marriage with a much older, mentally and physically broken alcoholic, Cahit (Birol Unel), but from their relationship a force emerges that brings salvation for them both. From the interaction between Germany and Turkey, new perspectives are constantly emerging in Akin's films. Instead of confrontation between religions and nationalities, he aims at bringing people together and reconciliation.

″Gegen die Wand″ (Head-On), in 2004, was the first part of his “Love, Death and the Devil” trilogy, which Akin then followed in a new, thoughtfully mellow tone in 2006 with ″Auf der anderen Seite″ (The Edge of Heaven). Six people wander between two worlds, between Germany and Turkey, between life and death and despite tragic events and deadly confrontations they somehow manage to find each other.

It is not only a coming together of the Muslim and Christian worlds, but also of the Turkish acting legend, Tuncel Kurtiz, from the films of Yilmaz Guney and the German Rainer Werner-Fassbinder star, Hanna Schygulla. The crossover, i.e. the penetrating of different areas, is to be found throughout Akin’s entire approach to filmmaking.This also applies to the film music, which from the very beginning plays a special role as a an impulse and mood generator and whose lyrics also promote and enhance the storyline. An enormous rhythmic, sensual and narrative force develops. By merging different musical genres like punk and Turkish folklore, the score also contributes subtly to the breaking down of borders.

A glimpse of German-Turkish relations

Between making feature films, Akin often shoots documentary films. For example, ″Denk ich an Deutschland – wir haben vergessen zurückzukehren″ (When I think of Germany – we forgot to return, 2001), which is the story of his parents immigration to Germany, or ″Crossing the Bridge – the Sound of Istanbul″ (2005), in which the German musician, Axel Hacke, explores the Turkish music scene of Istanbul, or ″Müll im Garten Eden″ (Polluting Paradise, 2012) about an environmental scandal in a village on the Black Sea.

The mixture of familiarity and alienness, proximity and distance has sharpened Akin's critical view of Turkish-German relations. Again and again he becomes a mediator, whether he is questioning the coerciveness of the violent machismo of Mediterranean societies, focusing on the marginalisation of Kurdish minorities, or, as in the last part of the trilogy ″The Cut″ (2014), dealing with the Armenian genocide.

Routine is the greatest enemy

In order to escape the routine, Akin is always looking for new ways to keep his eyes open and his approach alert by confronting himself with specific insecurities. In ″Tschick″ (Goodbye Berlin), his tenth feature film, he deliberately took on a lot of things for the first time: it was the first time, he decided to work on a commissioned project with a team already co-ordinated by another director (David Wnendt). It was the first time he narrated a whole story from the perspective of teenagers.

With a music selection ranging from SEED to Fractus and the Beatsteaks to a song by Richard Clayderman, he lets this summer of adventure pulsate between rousing drive, rocky beats and subtle melancholy. He convincingly captures the immediacy and insecurity of perception, recklessness and daredevilry. And, in doing so, reflects an attitude to life that he himself is probably very familiar with.

Home
Print
Newsletter
More on this topic
Fatih Akin's film about the Armenian genocide: Processing a collective traumaFatih Akin's film "The Edge of Heaven": Transcending prejudice and ideologyMulticulturalism in German cinema: We are here and that is how it should be!
Related Topics
Cinema, Fatih Akin
All Topics

Shot, beaten to death or drowned: a demonstration by tens of thousands of Algerians ended in the "Paris Massacre" on 17 October 1961. Sixty years on, historians and victims' ... END_OF_DOCUMENT_TOKEN_TO_BE_REPLACED

Western states have fought against terrorism not only in Afghanistan, but also in Syria and Iraq – leaving behind people who were once their partners in fear and poverty. Hisham A ... END_OF_DOCUMENT_TOKEN_TO_BE_REPLACED

Newly discovered aerial photographs taken by the German Luftwaffe show what a keen interest the Germans took in British-controlled Palestine during the Second World War. Not only ... END_OF_DOCUMENT_TOKEN_TO_BE_REPLACED

No other Western poet was arguably so well-versed in the Koran or so fascinated by Islam as Germany's national hero, Goethe. In a new publication that examines all Goethe's ... END_OF_DOCUMENT_TOKEN_TO_BE_REPLACED

The disappearance of Razan Zeitouneh and her colleagues has been one of the greatest mysteries of the Syrian war – until today. DW's investigative unit hunted clues across six ... END_OF_DOCUMENT_TOKEN_TO_BE_REPLACED
Author:
Anke Sterneborg
Date:
Mail:
Send via mail

END_OF_DOCUMENT_TOKEN_TO_BE_REPLACED
Social media
and networks
Subscribe to our
newsletter