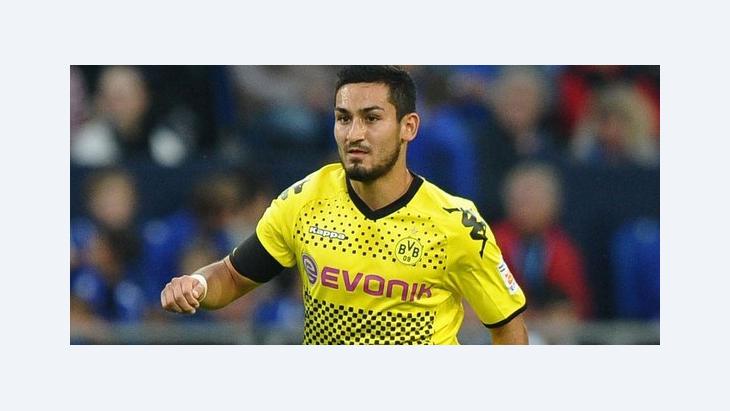 Ilkay Gündogan is a rapidly rising star in German football. German born, but with Turkish roots, he has won the German Championship and the DFB Cup with Borussia Dortmund, has been selected for the German squad for UEFA Euro 2012, and is "Integration Ambassador" for the German Football Association. André Tucic sends us this profile

When the whistle blew at the end of the DFB Cup final, there was no end to the rejoicing on the Dortmund side. Borussia Dortmund (BVB) had beaten FC Bayern Munich 5-2 at Berlin's Olympic Stadium. Ilkay Gündogan was also overcome with joy. Yet when he met fans, shook hands and exchanged slaps on the back, he suddenly paused for a moment: a fan was holding out a Turkish flag for him to take.

In such moments, it is commonplace for football players to drape themselves with their national flag, thereby highlighting their roots. But Gündogan, who only recently decided to play for the German and not the Turkish national team, turned down the offer of the flag.

Instead, he ran back to his celebrating teammates. A little bit later, however he could be seen with the white crescent moon on a red background wrapped around his body. He probably thought to himself: "I have Turkish roots and I should be allowed to express them."

"I am just as proud of my Turkish roots as I am of my German heritage," says Ilkay Gündogan. His father Erfan and mother Ayten were born in Turkey. Ilkay and his brother Ilker grew up in the city of Gelsenkirchen in the industrial Ruhr region, a good place for German–Turkish football players. After all, the city is the birthplace of Hamit and Halil Altintop and Mesut Özil. The Altintops play for Turkey, while Özil wears the German eagle on his breast.

"Illy," as Ilkay Gündogan is called, could have played for his parents' homeland if he had wanted to. "Of course, my Turkish heritage plays a role. But I was born and raised here and my mentality is German," he said recently. Yet before he made his debut with the German national team last fall, he had to earn his stripes on many football fields. 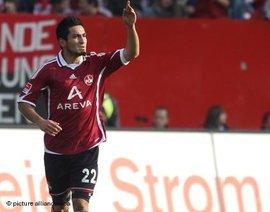 A demon in the goal-scoring area: Ilkay Gündogan fought hard for a place in the 1. FC Nuremberg team and latterly became one of its mainstays

​​As a young boy, he played in a club. When he was ten, he even played for a year with Schalke 04, the largest club in his native city. He then moved to neighbouring VfL Bochum, where he received his training.

From the second team in Bochum, he transferred to the second division team 1. FC Nuremberg in the region of Franconia. It took a whole six months before he finally got to play. Nuremberg was promoted to the first division of the Bundesliga (German Football League) and Ilkay Gündogan earned himself a permanent place on the team. From the 2010–11 season onwards, the Turkish-German Gündogan was a key player for Nuremberg. Then came his next career move: in the summer of 2011, he transferred to Borussia Dortmund for close to €5 million.

In his first year with Dortmund, which is playing refreshing football at the moment, he won the German Championship and the DFB Cup. With the BVB team, Ilkay Gündogan played 28 matches in the Bundesliga and two in the Champions League, scored three goals and helped set up three. These were impressive statistics, which caught the eye of German national trainer Joachim Löw.

But before hitting new heights, he had to struggle through a trough. From the very beginning, the expectations on him were enormous. After all, Dortmund expected him to fill the shoes of Nuri Sahin, who had transferred to Real Madrid.

During the first six matches of the season, Ilkay Gündogan was on the field from the very start, but did not play convincingly. He then found himself first on the replacement bench and then in the stands. He was criticized for slowing down the game and holding on to the ball for too long.

From then on, he was replaced by Sven Bender and team captain Sebastian Kehl. Only after Sven Bender suffered an injury did Ilkay Gündogan return to the starting line-up and was able to display his potential ever more frequently in the second half. "It was a difficult situation. But I finally made it," said Ilkay Gündogan. 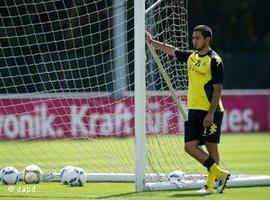 From sub to leading player: since joining BVB, Gündogan has played 28 games in the Bundesliga, two in the Champions League and has scored three goals

​​The highpoint of this positive career development was his performance during the DFB Cup semi-final against SpVgg Greuther Fürth. After 90 minutes of play, the score stood at 0-0 and the game went into overtime. It looked like everything would depend on penalty shoot-outs, when in the very last second, Ilkay Gündogan made a courageous shot at goal, first hitting the post and then the back of the goalkeeper Jasmin Fejzic. The ball bounced into the net and Dortmund were in the final.

Suddenly, Ilkay emerged from the background as a leader both on and off the field. The fan magazine Kicker even gave him top marks as a Bundesliga professional for the second half of the season. Many saw it as only a question of time until Ilkay Gündogan succeeded in making his breakthrough. He possesses subtle technical skills, handles the ball with elegance and he has the ability to make razor sharp passes during a game. He loves to run, is always on hand and ready to play the ball and take responsibility on the field. And on top of all this, he can deliver a hard and precise kick.

This talent didn't come from nowhere. Ilkay Gündogan has played in all the German junior national teams beginning with U 18. Before joining Joachim Löw's national squad, he could have gone to the Turkish national team. The Turkish Football Association had attempted to woo him. "I made a personal effort to convince him and we had a number of discussions," said the then national trainer Guus Hiddink.

In August 2011, he was called up to the German national squad. But he wasn't put on the pitch, and the Turkish advances did not cease. But Ilkay Gündogan didn't seem particularly interested. "I decided long ago that I wanted to play for the German national team," he said last year. Then on 11 October 2011, the stage was set. He made his debut in the 3-1 victory against Belgium in the UEFA Euro 2012 qualification match.

"The DFB jersey with my name on the back will get a place of honour in my home," he said enthusiastically. He recently played his second match for Germany in a test match against Switzerland on 25 May, which ended in a 3-5 defeat. A day later, Germany's Euro 2012 squad was announced, and Ilkay Gündogan's name was on the list. It was a dream come true, he said.

Integration off the field 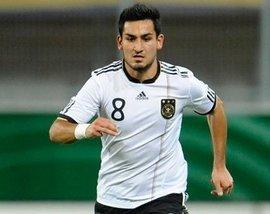 Says Gündogan: "I have played for all the DFB's youth teams, and it has always been my dream to play for Germany."

​​The German Soccer Association is not only interested in Ilkay Gündogan's soccer skills, he also plays a leading role in its television clip featuring a number of Bundesliga players as well as members of the U 17 and U 18 national teams. The message, which the young national player calls out in the clip, is that integration is fun.

He has also been named the Bundesliga Foundation's "integration ambassador". He will be the face of the campaign and his role will be to give encouragement to young people who, like him, are of migrant origin. The foundation's projects range from those that promote language and social skills to those that promote education and professional training.

Gündogan is evidently the perfect choice for the job: not only did he complete his high-school leaving certificate, he has also succeeded as a Bundesliga professional and member of the national team.

After at first agreeing to accept the grand prize as "Cultural Personality of the Year" in the Sheikh Zayed Book Award, Juergen Habermas then decided to decline the honour. A ... END_OF_DOCUMENT_TOKEN_TO_BE_REPLACED

Philosopher Juergen Habermas was due to be awarded a major Arab prize in Abu Dhabi, but has turned it down following criticism. This decision torpedoes Arab efforts at a ... END_OF_DOCUMENT_TOKEN_TO_BE_REPLACED

At nearly 92, Juergen Habermas is still advocating for a robust and transparent civil society. Now Germany's greatest living intellectual has rejected a book award from the United ... END_OF_DOCUMENT_TOKEN_TO_BE_REPLACED

Violent and racist crimes are on the up in Germany, according to official statistics on politically motivated crimes. Crimes by right-wing extremists hit their highest levels ... END_OF_DOCUMENT_TOKEN_TO_BE_REPLACED
Author:
André Tucic
Date:
Mail:
Send via mail

END_OF_DOCUMENT_TOKEN_TO_BE_REPLACED
Social media
and networks
Subscribe to our
newsletter