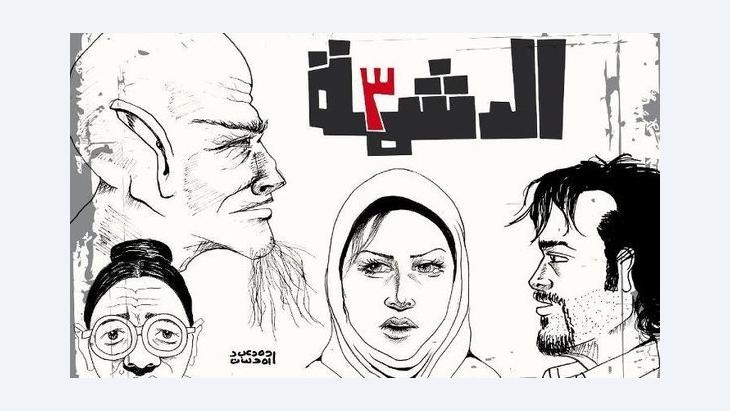 Comic illustrator Ahmed Omar is primarily known for his cartoons in "El-Doshma". His comics address the issues of corruption, injustice – and the search for a better life. Matthias Sailer introduces the artist

Ahmed realized he loved comics at an early age; when he was seven, he and his brother began holding drawing competitions: "We thought about what we'd like to portray and compared the end result. We drew everything – Ninja-Turtles, Captain Magid, Power Rangers as well as many of our own creations." The artist, who originates from Alexandria, continued to hone his technique during art studies in Cairo and decided to pursue his talents in a professional capacity.

His search for a partner who would be able to write texts to accompany his drawings eventually led Ahmed to Eslam Abu Shady. Eslam told him that the famous illustrator Magdy El-Shafee was planning a larger comic project – the comic magazine "El-Doshma".

Stories based on actual events 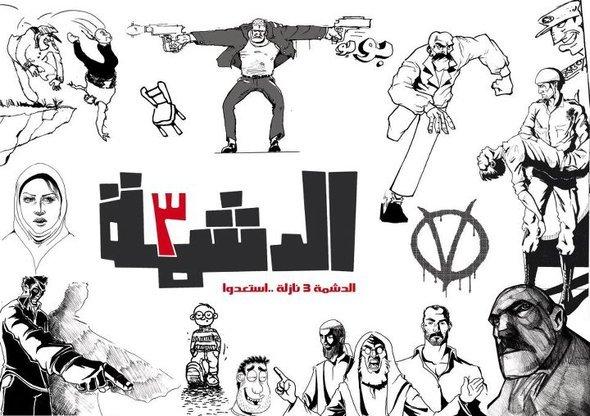 ​​The magazine's texts are written by Eslam Abu Shady, who now develops almost all the storylines for Ahmed's illustrations. But because even after the third edition in March no way was found to pay the artists for the creation of the magazine, the future of the team that has been involved so far is currently uncertain. At present, Ahmed spends most of his time working as a graphic designer and concept artists for a computer games company.

Ahmed's story in the first black-and-white edition of "El-Doshma" gathers together several plot strands finally culminating in the events on and around Cairo's Tahrir Square in January 2011. Ahmed is especially fond of this story "because it is based on actual events on Tahrir Square".

So we have Mustafa, a rather apolitical Muslim accountant with civil servant status, who is expecting a baby with his Christian partner whose strict mother works as a preacher in a church. 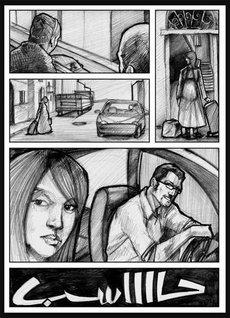 The search for a better life: Ahmed Omar's comics focus on the young generation's disaffection with prevailing political conditions, rampant corruption and nepotism

​​The second protagonist is embodied by a phenomenon that emerges repeatedly at demonstrations – namely the paid-up heavy who suddenly appears from nowhere and who manipulates the protests in favour of his employer.

This roughneck is paid for his services by the police. Another protagonist is an ordinary riot police officer who, unlike most of the other recruits in the troop, has an unusually marked sense of personal morality.

"We belonged to the sofa brigade"

The exciting thing about Ahmed Omar's characters is their development during the course of the story. Mustafa for example, whose pregnant wife is killed in a car accident during the demonstrations, initially blames the rallies for the chaotic circumstances – and therefore for the death of his wife. But as the plot progresses his understanding of the background to the protests increases, and he begins to question his apathetic view of conditions in his country.

The development of the fictional character Mustafa is no coincidence, but also reflects how Ahmed Omar's own personal viewpoint has changed since the revolution. "I stayed at home for the entire 18 days. Together with my brother we sat close to the door armed with cudgels and protected the house from thieves," he says, laughing.

This is the kind of behaviour you might expect from the son of a police officer. "At the time, I was still critical of the protests. We belonged to the sofa brigade," says Ahmed, in an allusion to those members of the populace who are not bothered about politics and who sit lethargically on the sofa at home. But his political views have changed dramatically in the meantime, and this is also reflected in his comics.

Ahmed's main priority is to show "the view from the other side", that there are always several perspectives on a problem. For example, on the one hand he draws the paid ruffian as an angular, muscular, dark figure. But on the other hand he also gives him friendly, sometimes almost gentle facial features that emphasise that fact that he is not accepting payment from the criminal police officer because he enjoys this kind of work, but because he wants to be able to pay the rent on a miserable apartment for himself and his mother. 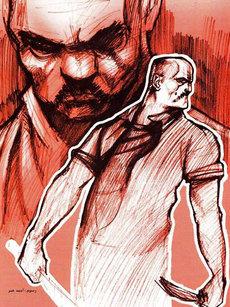 From the 'sofa brigade' to active political participation: Ahmed Omar was initially critical of the protests, until he began to understand more about the background to the rebellion in Egypt

​​The riot police officer is also not just portrayed as an anonymous, brutish representative of the regime: He develops an increasingly critical view of orders issued from above to unleash brutality on the demonstrators and eventually even shoots the criminal police officer.

Similarly, much attention is devoted to the how Mustafa's Christian wife suffers at the hands of her strict mother, who condemns the relationship with her Muslim husband. This is intended to show what rigid social conventions can mean to a young person. At one point Ahmed even departs from the realistic portrayal of the mother, casting her as a priest with apparently masculine traits.

He allows even more room for these more abstract forms of portrayal in his latest comic, which has yet to be published. The story he has selected also remains true to his key thematic issues: This one is about a person who has been crushed by strokes of fate and social conventions, someone who suffers from hallucinations and takes medication to keep himself under control.

In this way, Ahmed Omar's comics mirror the contemporary political and social upheaval going on in Egypt and many other Arab countries. They focus on the widespread disaffection – primarily of young people – with corruption, rigid conventions and injustice evident on all levels – or in Ahmed's own words, "the young generation's search for a better life".

Since President Abdul Fattah al-Sisi seized power in Egypt in 2013, he has ruled the country with an iron fist. Civil society, opposition and free press struggle to survive. Tens ... END_OF_DOCUMENT_TOKEN_TO_BE_REPLACED

The lack of grain supplies from Ukraine is forcing Egypt to act. Now even the Toshka project is being revived to grow grain in the desert. Birgit Svensson travelled to see it END_OF_DOCUMENT_TOKEN_TO_BE_REPLACED

In this unusually beautiful book of images and text, published in German and Arabic, artist Marianne Manda presents her own unique take on the megacity of Cairo. In over fifty ... END_OF_DOCUMENT_TOKEN_TO_BE_REPLACED

A stage, lights, a mesmerised audience: it looks like an Egyptian folkloric concert, but Umm Sameh is singing to heal the sick by driving out the demons that possess them END_OF_DOCUMENT_TOKEN_TO_BE_REPLACED
Author:
Matthias Sailer
Date:
Mail:
Send via mail

END_OF_DOCUMENT_TOKEN_TO_BE_REPLACED
Social media
and networks
Subscribe to our
newsletter