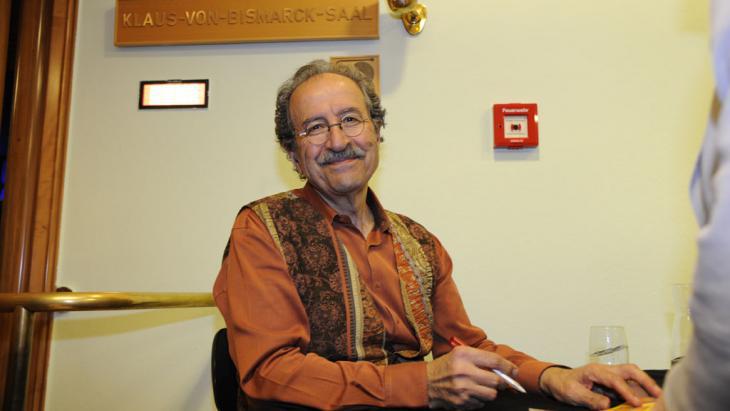 Profile: the Syrian–German author Rafik Schami
An exile in his homeland

Rafik Schami is one of the most important authors writing in the German language. Though he first came to Germany when he was 25 years old, his Syrian homeland is never far from his thoughts. It is also the setting for many of his stories. Markus Clauer introduces the best-selling author

One of Rafik Schami's most recent and at the same time oldest stories tells of a hairdresser he visited as a 15-year-old in the Syrian capital of Damascus, where he was born in 1946. The barber was reputed to be a wise man. A deserved reputation as it transpired. However, to the writer's dismay, he proved to be more butcher than barber when it came to cutting hair. Schami's locks would eventually recover from the attentions of the hair-messer, and the story was stored away in his memory until it finally saw the light of day in 2011 as one of the tales in "Die Frau, die ihren Mann auf dem Flohmarkt verkaufte" (The woman who sold her husband at the flea market). It tells the story of how Schami became a writer.

Born Suheil Fadel, Rafik Schami is the son of a baker, a Christian who, as a 16-year-old, started up a wall newspaper. He came to Germany when he was 25, arriving in Heidelberg with a suitcase full of manuscripts to begin his new life. Before establishing himself as a full time writer, however, Rafik Schami found time to do a doctorate in chemistry.

The Syrian-born author has been writing in German since 1982, having taught himself to write literature in German by painstakingly copying out classics by German writers such as Thomas Mann and Johann Wolfgang von Goethe, by hand. Though public reading sessions in the early days of his career would draw a mere handful of listeners, nowadays his works are translated into 24 languages, and readings attract capacity audiences. Now a German citizen, he is confident enough of his status to refer to himself as the "most successful Syrian author in the world". He has remained, however, as the translation of his name, "Rafik Schami", reminds us, "a friend from Damascus".

Homage to his first homeland

When he wakes in the morning, says Rafik Schami, the first thing he thinks of, wistfully, is Damascus. Though his memories of the city of his childhood are a source of happiness, there is also worry when he thinks of his sister, who still lives in the war-torn country. His stories are almost always set in the Syrian capital, a homage to his crisis-ridden homeland.

Though he is not welcome in Damascus and has not been back there for 40 years, Rafik Schami has conserved Damascus in his stories. Thanks to Google Earth and the passion of the exile, he still has a very detailed local knowledge of the area and is a popular interviewee whose views are often sought for comment on the political situation. His organisation "Schams" provides financial support for children and young people in Syria. 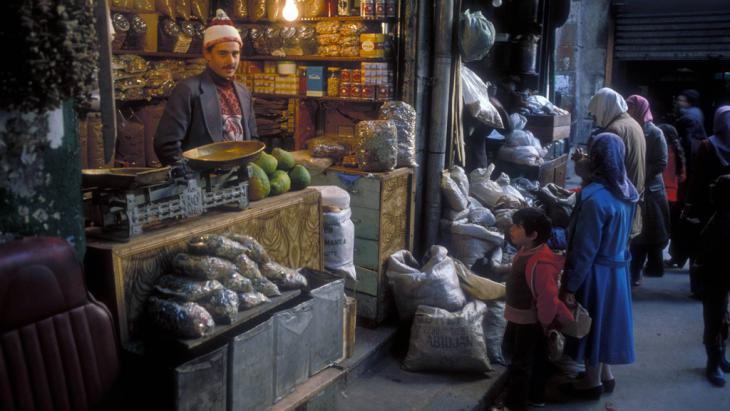 So far and yet so near. Although Rafik Schami has lived in Germany since he was 25, never a day passes without him thinking of his native Damascus. "Though he is not welcome in Damascus, and has not been back there for 40 years, Rafik Schami has conserved Damascus in his stories," writes Markus Clauer

Rafik Schami has also been the recipient of many awards for his literary work. In 1994 he won the Hermann Hesse Prize for "Der ehrliche Lügner" (The honest liar), in 1997 the Hans Erich Nossack Prize for his complete works, and in 2011, the Georg Glaser Prize for Literature. His novels are Syrian synaesthesiae, above all "The Dark Side of Love" (2004), with its broad-weave, densely-textured narrative. Rafik Schami is a true storyteller, and one who invests all his stories with an oral and mythical quality: many stories, and the oriental atmosphere as bonus.

Stories rather than explanations

Those curious to know what Rafik Schami himself thinks of his work would be well advised to consult the pages of "Die Frau, die ihren Mann auf dem Flohmarkt verkaufte" (2011). It is here we find out what it was that brought the author to write in the first place. One of the twelve chapters of this engaging self-revelation includes a slightly edited version of the speech given by Rafik Schami on the occasion of his appointment as Brothers Grimm Professor at the University of Kassel in Germany in 2010.

In it, he also touches upon such topics as the "therapeutic" qualities of the fairy tale for the masses, or sayings that are "essences of experience". And he philosophises about the ways in which the desert has influenced the eloquent, though visually sparse, qualities of Arab culture – in the desert the eye rests while the tongue is set free.

The book, a collection of short stories, episodes and speeches, is both autobiographical poetics and ethnographic narrative. Rafik Schami would never put it like that, however. He is a strict adherent to clarity and intelligibility. Telling stories is more important to him than verbose grandiloquence; stories are always preferable to explanations.

Rafik Schami has lived in a village in Germany's Rhineland-Palatinate region for many years. In his thoughts he is often in Syria. He is at home in Germany, but plans to return to Syria one day – as a victor over the regime. Until then, he will continue to write about being German but remaining a man of Damascus.

Once, when lecturing on poetry at the University of Koblenz-Landau, he was asked if he might not be inhabiting a paradox; was he not in fact an exile in his homeland? "Yes," replied Rafik Schami. "I am".

Education for girls and women is still possible in Afghanistan, says Reinhard Eroes of the Kinderhilfe Afghanistan initiative. In interview with Elisa Rheinheimer, he talks about ... END_OF_DOCUMENT_TOKEN_TO_BE_REPLACED

In Doha, Arabs from Morocco, Tunisia, Egypt and Algeria are gathering to celebrate the first ever FIFA World Cup to be held on Arab soil. The criticism from Europe? Over the top, ... END_OF_DOCUMENT_TOKEN_TO_BE_REPLACED

Canan Topcu came from Turkey to Germany as a child. In her essay, she describes how bothered she was by the racism she encountered in her country of origin when she travelled ... END_OF_DOCUMENT_TOKEN_TO_BE_REPLACED

All organisers use major sporting events like this year’s FIFA World Cup in Qatar primarily to advertise their country and promote a slick public image. This is not something we ... END_OF_DOCUMENT_TOKEN_TO_BE_REPLACED

A leading light of Israeli theatre, Ofir Henig has directed the Israel Festival and is the only female director to have been awarded the Israel Theatre Prize. These days, however ... END_OF_DOCUMENT_TOKEN_TO_BE_REPLACED

Antoine Leiris lost his wife in the Islamist terrorist attack on the Bataclan club in Paris. German director Kilian Riedhof has made a film of his book "You will not have my hate ... END_OF_DOCUMENT_TOKEN_TO_BE_REPLACED
Author:
Markus Clauer
Date:
Mail:
Send via mail

END_OF_DOCUMENT_TOKEN_TO_BE_REPLACED
Social media
and networks
Subscribe to our
newsletter