A Darkening of the Emotional State

Unlike their US role models, the Iranian progressive rock band Dash has to play either in basements or abroad. But despite the country's strict censorship laws, the band is reaching its fans via Internet. Alessandro Topa reports from Tehran

Unlike their US role models, the Iranian progressive rock band Dash has to play either in basements or abroad. But despite the country's strict censorship laws, the band is reaching its fans via Internet. Alessandro Topa spoke to some of the band's members in Tehran

​​The socio-political reality of life in Iran appears to have become so complex that the creative minds spearheading underground rock in the country resort to scepticism. Instead of surrendering to the risk of making a political error, Dash sing about an ego that is unfathomable to itself. This ego is male and is housed inside a progressive rock body that has been hardened by melancholy and has dreadful problems with women.

With his reddish blonde locks, Maani looks a bit like the British drummer Ginger Baker when he played with the rock group Cream in the late 1960s. The 26-year-old guitarist with the Tehran-based progressive rock band Dash has no intention of allowing political generalisations into his song lyrics. Even the woes of his contemporaries in southern Tehran are completely alien to him, he says. "I barely understand what's going on in my city socially, so how am I supposed to arrive at any general political statements?"

This is why he thinks it's a good thing to simply express his "inherent feelings and thoughts," just as the band's singer Babak does. "Then at least no one can come along and say: that's not true!" Meanwhile drummer Milad, who has been fiddling around with the mixing console, takes his drumsticks out of his mouth and says: "I don't think that's all our music is about. It's about the break-up of a relationship. And that's ultimately a social issue, isn't it?" Siavash is a year older than his fellow band members and says nothing, an eloquent silence specific to bass players. 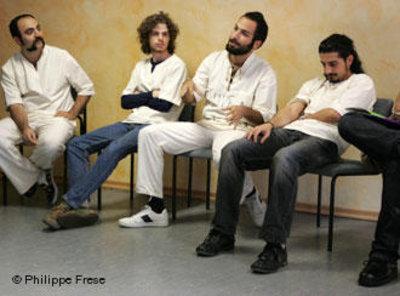 Strikes a chord with many youngsters in Tehran and other Iranian cities: the rock band Dash during an interview

​​The band rehearses in a small industrial estate between two urban motorways in north-eastern Tehran. The tiny room in the basement of a construction company is not the best place to be pondering the difference between the social and the political or questioning the politically abrupt self-assurance of a subject that is not transcendental in any way, but actually rather masculine.

Before the practice session begins, the boys go out again to inhale some fresh traffic fumes. Thousands of cars are rolling bumper to bumper onto a huge sloping plane, which is bathed in a greyish pink dusky light and framed by the gigantic Elburz mountain range to the north. Lights are being turned on in the surrounding apartment blocks.

It will soon be six years since Dash began playing together, but since 26-year-old singer Babak went to Australia to complete his material sciences degree, and 23-year-old multi-instrumentalist Makhan went to hang out in Europe, the band's work methods have changed dramatically, explains IT engineer Milad from behind his laptop: "Here are the click tracks with sound tracks from the record. So we're listening to rhythm information and play to the basic parts of our vocalist and guitarists. It means we can at least simulate a practice situation."

Dash performed at the Morgenland Festival in Osnabrück in 2008. It was one of band's rare appearances together. Since releasing their album Si onto their website for download, they have no longer been able to perform as a complete band.

This vexing issue even draws Siavash out of his silence: "In Iran right now, we can't try out anything new, nor can we market our CD," he says. Aside from the fundamental medium that is the Internet, word of mouth is the only marketing tool known to the Iranian underground.

"But we're very popular with 20 to 30-year-olds," says webmaster Milad. Website statistics appear to confirm this, as does a second place at the virtual music festival organised by the online magazine Tehran Avenue. Dash is striking a chord with many young people.

Nevertheless, Dash has not even tried to obtain all the various permits for CD release from the Ershad Ministry of Culture and Islamic Guidance. This is because not only does the censorship authority base its decisions on moral, religious and political criteria, it also takes aesthetics into consideration.

"The heroes of Dash are granite-hard US bands like Tool and Perfect Circle, whose songs loom like cable-stayed bridges to hell," writes Alessandro Topa

​​In this respect, it is of secondary importance whether the guardians of culture actually do base their decision on sura 31, verse 6 of the Koran, which threatens "shameful retribution" to those who "divert others from the path of God" through "captivating entertainment", the aesthetic preferences of a band such as Dash, which creates such hard, sometimes psychedelic music with complicated rhythms, means its members have not even thought of attempting to negotiate the red tape. "Although we're non-political and it's our trademark to combine Persian and western elements, we wouldn't stand a chance," says Maani.

Dash has performed four times in six years: at private concerts and at the state University of Tehran. "That was more than five years ago," says Milad, working it out. "No, it was 1383!", says Maani (2004–2005 according to the Solar Hejri calendar used in Iran). Whenever it was, at the time they played cover versions of songs by Nirvana, Radiohead and the Red Hot Chili Peppers.

Siavash interjects that the group was supposed to have played with 10 other bands in the park of the Saadabad Palace as part of a UNESCO event in 2008. "It was all sorted – programmes had even been printed up – but then the Music Association banned the concerts," he says. The organisation explained its decision by saying that the music was not traditional Persian music.

Both Persian folk music and – originally courtly – classical ensemble music have been consistently fostered in Iran since 1979, as a cultural alternative to the western music of the Shah era. Under the reformist President Khatami, all kinds of non-traditional musical genres were able to win back their place in the musical life of the nation. Much of what is acceptable today would have been unthinkable 10 years ago. "My sister always had to take a permit along with her every time she left the house with her guitar case," Milad recalls.

Gradual darkening of the emotional state

In modern-day Tehran, not only are there music shops where you can legally purchase frothy Persian pop and Phil Collins CDs, electric guitars are also displayed in shop windows and there is evidence of a vibrant concert scene ranging across the genre spectrum from ethno-jazz to religious propaganda music.

​​In July 2009, for example, the Tehran Symphony Orchestra played pieces by George Bizet and Jean Sibelius, only to follow this up in August with a performance of a 12-part symphonic composition that ended with the return of the hidden twelfth imam and sought to propagate the "philosophy of Mahdism" – to the undoubted approval of President Ahmadinejad.

The heroes of Dash are granite-hard US bands such as Tool and Perfect Circle, whose songs loom like cable-stayed bridges to hell. "Our album relates the gradual darkening of the emotional state of a guy who initially and euphorically believes he has found the love of his life and who is eventually consumed by murderous thoughts," says Siavash, neatly summing up the Dash philosophy.

"Our relationships start out on an unhealthy foundation, develop along stereotypical lines and end in a way that soon makes you hate the game," says Milad. They can't explain why this is the case. The young technology freaks are far removed from the subtle hermeneutics of gender relations portrayed in Asghar Farhadi films such as About Elly. Milad's conclusion is backed up by the country's rising divorce rates: "Relations are fucked up in Iran," he says.

END_OF_DOCUMENT_TOKEN_TO_BE_REPLACED
Social media
and networks
Subscribe to our
newsletter