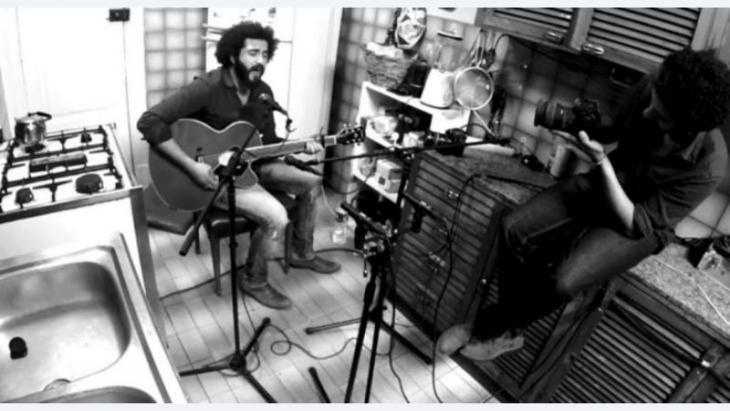 Project: ″Music Spaces in the Arab World″
Between the pots and pans

The Arabic music scene is booming. The Goethe-Institut is therefore creating new spaces and networking opportunities for local artists. Living rooms and kitchens from Tunis to Baghdad are being converted into concert halls. The Musikraum project showcases the sound of Middle Eastern indie-pop between the pots and pans and reveals what it is that Sudanese girl groups sing about. By Friederike van Stephaudt

The musicians perform in private homes in Alexandria, Beirut, Bethlehem, Erbil, Gaza, Cairo, Khartoum, Ramallah and Tunis. The concerts are filmed and the videos uploaded to the Musikraum online platform where they can be watched from anywhere, at any time.

One of the artists is the Egyptian singer/songwriter Shady Ahmed. He combines western rock music with Arabic lyrics, for example in his song ″Haga wa ′ishrin″. Shady Ahmed′s concert was held in the kitchen of a private residence in Garden City in Cairo.

In their songs, the girl group Salute Yal Bannot addresses issues that affect the women of Sudan and elsewhere: social oppression, racism and love. The name of the band stands for diversity: the women come from all different parts of Sudan. They sing in English and Sudanese Arabic and hope through their music to encourage women to be independent.

To give the eleven musicians enough space, their concert was recorded in the recording studio Sync Multimedia Productions on the Blue Nile. The studio is a hub of the Sudanese music scene.

The artists are proposed by local curators and selected by a jury from the Arab world and Germany. One of the primary criteria is the intercultural relevance of their music. Participants reflect social issues in their music, which ranges from traditional songs to Arabic alternative rock.

″Project Seer″ is the pseudonym of the Beirut singer Sima Itayim. The musician grapples with growing up in many of her songs. The concert was recorded in her bedroom where she writes most of her songs.

The highlight of this cultural exchange project is set to be the performance by selected artists at the Hamburger Küchensessions Festival on 21 September 2016.

Tourists have been returning to Tunisia, Egypt and Morocco. But, given the global uncertainty caused by the Ukraine war, will the comeback be enough to save a struggling sector, ... END_OF_DOCUMENT_TOKEN_TO_BE_REPLACED

In this essay, renowned Lebanese journalist and writer Hazem Saghieh asks whether the Arab Levant, which stretches from Iraq in the east to Egypt in the west, will remain an ... END_OF_DOCUMENT_TOKEN_TO_BE_REPLACED

By 2050, the Middle East and North Africa could be dealing with many more elderly people suffering from dementia. A lack of facilities, specialists and local knowledge means the ... END_OF_DOCUMENT_TOKEN_TO_BE_REPLACED

With his fist bump greeting for a man he previously called a pariah, US President Biden has paved the way for Saudi Crown Prince Mohammed bin Salman's return to the international ... END_OF_DOCUMENT_TOKEN_TO_BE_REPLACED
Author:
Friederike van Stephaudt
Date:
Mail:
Send via mail

END_OF_DOCUMENT_TOKEN_TO_BE_REPLACED
Social media
and networks
Subscribe to our
newsletter