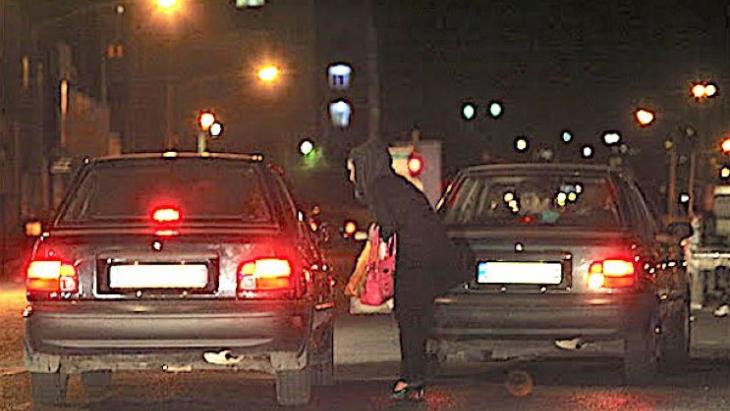 Prostitution in the Islamic Republic of Iran
Open-minded, loving... and desperate

How did the Islamic revolutionaries deal with prostitution and sex workers in Iran, and how does the business of sex work in Iran today? Have supply and demand changed four decades after the ayatollahs came to power? By Nasrin Bassiri

On 30 January 1979, some two weeks before Ayatollah Ruhollah Khomeini came to power, yet with the revolution in Iran well underway, Muslim fanatics marched into Shahr-e No, Tehran's red-light district. Initially the angry mob was stopped by the Shah's soldiers. But, as the Iranian daily Ettelaat reported the following day: "Some managed to make their way into the district despite the efforts of the security forces. They set fire to shops and houses. As a result, some people were killed and many injured". The newspaper added that "at the same time, some of the protesters stood up to the mob, saying the prostitutes were victims who needed protection".

Twenty-four hours after the attack, the liberal Ayatollah Taleghani declared the assault on Shahr-e No an "act of injustice": the women there were "victims of the corrupt dictatorship, which was dependent on foreign powers". In future, they should be able to feel safe, Taleghani said. "They should finally be given the human dignity they deserve." Suspecting government stooges behind the storming of the red-light district, the ayatollah asked, "What we have to find out is why did they animate our unsuspecting Muslim brothers to storm the district?"

In addition to 2,400 women and their children, some 9,000 men are said to have lived in the neighbourhood at the time, working either in the shops and cafes, or as private security guards for the house madams, as Aligholi Foadzi, commander of the revolutionary committee responsible, reported a few months after the revolution.

According to Islam, monogamy is a sacred duty for Muslim women. A male Sunni is allowed to marry four women, while Shia men – Iran's Muslims are majority Shia – are also allowed to marry countless other women in so-called temporary marriages. When entering into a temporary marriage, the partners involved determine its duration in advance, which may range from a few minutes to 99 years, agreeing on a fixed sum of money to which the wife is entitled. Unlike in a regular marriage, she is not entitled to any further support.

For young and modern people in Iran, especially for women, this sounds ideal. They can live with their lovers without being harassed by moral guardians and can separate from their partners without their consent if they wish. They can love and be loved without becoming second-class citizens as a result of legislation that discriminates against them.

For traditionalists, on the other hand, temporary marriage means that a well-off man, even if married, can use the services of one or more women who earn their living through sex work. The latter receive a one-off payment for their services. The reasons for women becoming involved are many and various. Usually they belong to the underprivileged classes and act out of necessity – whether that's buying school books for their children or to being able to live a carefree life for a few months.

There are no official statistics on the number of sex workers in Iran. The Persian-language online portal Eghtesaad24 estimated in April 2021 that there were "several million" Iranian women engaged in this profession: on the streets, through online advertisements, or via agencies. Two years ago, the news site Rouydad24 put the number of "placement centres" in Tehran at 8,000. According to the site, the average age of women has dropped from 20 years to "18 to 12 years" in the past eight years. Owing to the miserable economic situation in Iran, Eghtesaad24 reports that married women are also offering sexual services more frequently – with their husbands' consent, as a means of supporting the family.

In December 2019 Rokna news agency carried an item about women staying in burial caves in Tehran's Beheshte Zahra cemetery and offering sex for a falafel sandwich. They would take customers to the "grave" and serve them there. About a year ago, Didar News reported on women so desperate they were selling their bodies for 50,000 or even 20,000 rials (the equivalent of 16 cents and 6 cents).

In some places in Iran, state-run houses for destitute women, known as "chastity houses" exist, an idea originally suggested by the "Council to the Islamic Community in the Holy City of Qom". These foresaw that divorced, widowed, or single women be brought together with men in such places to enter into temporary marriages with them. The idea was subsequently dropped. However, some of these houses do still exist, one of them in the exclusive neighbourhood of Zaferanieh in Tehran's north.

Prostitution as a criminal act

The death penalty can be imposed for prostitution in Iran if the woman in question is married. IN such cases the client may also be executed. Yet despite such danger, the sex trade flourishes on the streets of Iran's major cities, especially in Tehran and the two main pilgrimage cities of Mashad and Qom. Dubai, Kuwait, the United Arab Emirates and Iraq all have stable currencies, which is why Shia men from these countries make pilgrimages to Iran, enjoying the beautiful landscape, the sights – and the women – who can be had for next to nothing due to the sanctions and the economic crisis. 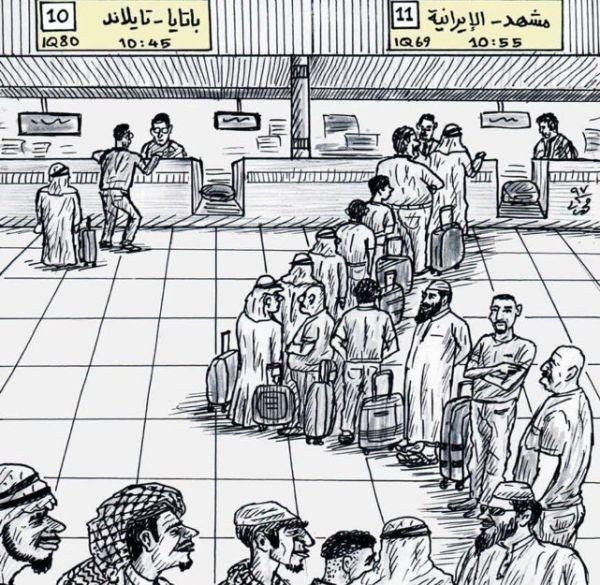 "Left for Pattaya/Thailand, right for Mashad": Three years ago a caricature by Behnam Mohammadi made the rounds on the Internet: it depicts an airport in an Arab country where the check-in counters for "Pattaya/Thailand" and "Mashad/Iran" are next to each other. There are only two men standing in front of the counter for Pattaya, while numerous men travelling alone wait in front of the counter for flights to Mashad

In many countries, sex workers wear distinctive clothing so that they catch the eye and are more easily recognised by their clients. In Iran, this is made more difficult because of the Islamic dress codes. Unlike in Europe, sex workers are not to be found in certain neighbourhoods, but are everywhere, on every street: thus, any woman waiting on the side of the road for a shared taxi can be mistaken for a prostitute. Consequently, men in expensive clothes driving high-end limousines will step on the brakes for beautiful and well-groomed women; for the rest, South Korean cars of somewhat older vintage will stop, their occupants shouting and honking. If the woman shows no interest and walks away, the driver will sometimes put the car in reverse and follow her. Unsurprisingly many Iranian women feel unsafe when out and about on their own.

Many company bosses try to exploit the high unemployment among young Iranian women, placing ads for vacancies that turn out in interview to expect the provision of sexual services. One example reads: "We are looking for a good-looking, single woman up to 27 years of age for the position of secretary, flexible working hours and commitment at weekends is expected".

On an online portal for flat hunters, a man was looking for a female flatmate between 25 and 35 years of age; she was to pay the equivalent of 3 euros per month to share his 130-square-metre flat. Another was looking for a home help who would also take care of the children. He was looking for a woman up to 40 years old. She should be willing to enter into a temporary marriage with the father of the family, the ad said.

One temporary marriage agency publishes profiles and short voice samples of women who are willing to enter into a temporary marriage for a "session". The profiles include the "bride money" due for one session and other information about the women. Test results on infectious STDs are available, it goes on to say, and the height and weight of the women have also been "checked in advance".

Home
Print
Newsletter
More on this topic
Prostitution in the Shah's Iran: Shahr-e No – "the neighbourhood of the sorrowful" The documentary film ''In the Bazaar of Sexes'': Temporary marriage in IranChild trafficking in Iran: The agony of the destitute
Related Topics
Human rights, Islamic Revolution of Iran, Muslim women, Prostitution/Human trafficking, Sexism and violence against women, Shia Islam | Shiite Muslims, Sunni Muslims | Sunni Islam, Women in the Islamic world
All Topics

Since Ali Khamenei, Iran's most powerful man, has openly and unconditionally come out in support of Putin's war in Ukraine, logistical help is on its way, with an allegedly ... END_OF_DOCUMENT_TOKEN_TO_BE_REPLACED

A sci-fi film lampooning the Islamic Republic and all that its regime holds sacred premiered quietly at a nondescript venue in Los Angeles in July. The title, “Velayatnameh”, is a ... END_OF_DOCUMENT_TOKEN_TO_BE_REPLACED

The Palestinian militant organisation Hamas, with Hezbollah's help, is building up a military presence in Lebanon, the ultimate consequences of which could be devastating, writes ... END_OF_DOCUMENT_TOKEN_TO_BE_REPLACED

With his fist bump greeting for a man he previously called a pariah, US President Biden has paved the way for Saudi Crown Prince Mohammed bin Salman's return to the international ... END_OF_DOCUMENT_TOKEN_TO_BE_REPLACED

Days of protests across Iran followed the collapse of a high-rise building in the city of Abadan in May 2022. But why has the disaster become such a political issue? Rahman ... END_OF_DOCUMENT_TOKEN_TO_BE_REPLACED
Author:
Nasrin Bassiri
Date:
Mail:
Send via mail

END_OF_DOCUMENT_TOKEN_TO_BE_REPLACED
Social media
and networks
Subscribe to our
newsletter