Where Are the Sober-Minded People?

It goes without says that religion can be criticised, says Aiman A. Mazyek. At the same time he points out that indignation is also a human right. In this article, Mazyek takes a look at the cartoon conflict from both sides 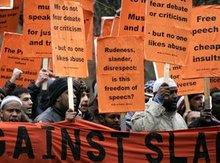 Both sides in the conflict have made the clash of civilisations a self-fulfilling prophecy, writes Ayman A. Mazyek. Moderates and mediators are having a hard time making themselves heard among the clamour

​​The spirit of the Danish cartoons is the same as that of an old children's nursery rhyme: "Coffee. Don't drink too much coffee / Little children, avoid this Turkish drink / It'll leave you sick and unable to think / Be not like the Mussulman / Who from coffee can't abstain." In other words, they are insulting, defamatory, and loaded with prejudices left over from past centuries.

The cartoons also bring well-known stereotypes into play and portray Islam as being violent, archaic, and barbaric to the core. We are familiar with this contemptuous portrayal of people of different faiths from the portrayals of Jews dating from the early days of the 20th century.

This debate comes at a time when the social attitude towards immigrants in Europe – and towards Muslim immigrants in particular – has seriously deteriorated. Open discrimination that flatly rejects Islam as a "terrorist religion" – a stance recently taken by right-wing politicians in Denmark – is on the increase.

National governments generally tend to turn a blind eye and most states do not have a constructive policy regarding Muslim minorities, sometimes with fatal consequences – as this case demonstrates.

The power of the boycott

Admittedly, we all underestimated the vehemence of the protest in the Islamic world. We were obviously out of our depth – a fact clearly demonstrated by the Danish government's unfortunate attempts at crisis management.

Arab countries boycotted Danish imports, ambassadors were summoned, entire social groups suddenly stopped buying Danish produce. This was a huge blow to Danish society: not in terms of culture, but in terms of economics. Jobs are at stake here; years of hard work by Danish companies in places like Saudi Arabia have gone up in smoke overnight. Danish businesses responded by begging Prime Minister Rasmussen to make an apology. This image is now firmly entrenched in European minds.

However, instead of calming frayed nerves by pursuing a policy of de-escalation, the bell for round two of the fight has been rung.

Commentators on both sides of the fence are further fanning the flames and sense that they have at last found conclusive evidence of what they have suspected all along: a clash of the cultures. The debate is being exploited and many media representatives already wrongly believe that they are campaigning for the freedom of the press.

On the one side, the Islamic world feels that this episode confirms its unwavering image of Europe as a blasphemous continent steeped in Islamophobia and now feels obliged to set an example.

The discussion about cause and effect has been overshadowed; emotions and resentment now dominate the debate. Each party thinks it knows best and wants to impose its view of the world on the other and – and this is where things really get absurd – call the whole thing a dialogue of the cultures.

But a dialogue of the cultures cannot be conducted in a destructive and defensive manner.

And one other thing: it goes without saying that religion can be criticised and that, in some cases, where necessary, the followers of a religion must be criticised. This debate is no longer about whether the Prophet should have been portrayed in a cartoon or not. But does freedom of expression give people the right to blaspheme and to carve prejudices in stone? Is provocation the only way we see fit to conduct a critical dialogue with Muslims in future?

Indignation is another human right

The indignation about the cartoons that has gripped the Islamic world is now skilfully being reinterpreted as a symbol of the battle against press freedom. Note: indignation is another human right. Naturally, everyone should roundly reject and condemn the chants and threats of Muslim hooligans who are willing to commit acts of violence.

However, these scenes are being served up on our television screens in such a way that they create the impression that a gang of mutinous rowdies is hammering on the gates of Europe demanding that the freedom of the press be revoked. This does not accurately reflect reality.

On the contrary, these societies would like nothing more than to have the rule of law and press freedom in their own countries, which is not the case at present.

A quick scan of the Basic Law proves that press freedom and respect for religion need not be mutually exclusive and can indeed complement each other beautifully.

But at present they are being built up into incompatible opposites by those scaling the barricades on both sides of the divide. It is already clear who the winners will be: the Huntingtons on both sides. But where are the reasonable people? Where are the sober-minded?

Protest against Mohamed Cartoons
"The Reactions Are Themselves Caricatures"
Raja Ben Salama, professor for literature in Tunisia, warns that violent reactions in the Islamic world to the caricatures of the Prophet seem proof that Islam indeed has a tendency to be narrow-minded and theologically rigid

Escalating Conflict about Prophet Caricatures
Bomb in Turban
After the publication of the provocative Mohammed caricatures in a Danish newspaper the question has been raised about whether certain rights such as the freedom of speech and the press should really remain unrestricted or whether they – like every other freedom – should find their limits where the freedom of the other is affected. By Peter Philipp

Europe in the Arab Media
Differentiated Perception
Whether discussions on controversial prophet caricatures in a Danish newspaper, naturalization tests for Muslims, or xenophobia in Germany – the theme of Muslims in Europe is not only making headlines in the western Media, but in the Islamic world as well. Götz Nordbruch reports

END_OF_DOCUMENT_TOKEN_TO_BE_REPLACED
Social media
and networks
Subscribe to our
newsletter