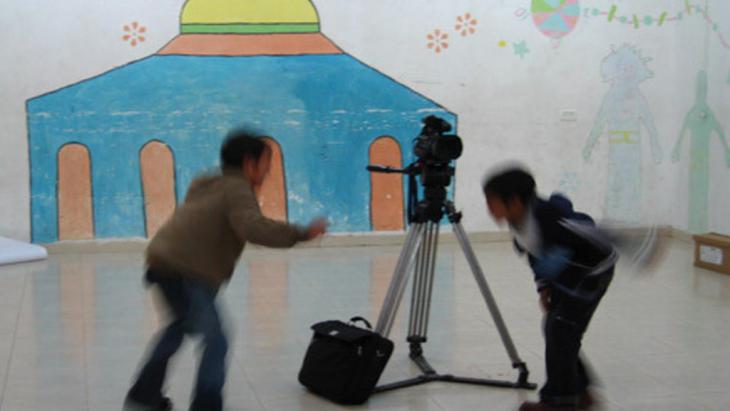 Protest and culture in Palestine

A recent study by the Arab Studies expert David Kreuer indicates that young Palestinians do not view engaging in armed struggle as the first option when it comes to putting up resistance to Israel. By Joseph Croitoru

The recent military conflict in Gaza between the Israeli army and Hamas once again brought young Palestinians onto the streets of the West Bank to demonstrate. As has so often been the case in the past, their protests – the best-known form of ritualised Palestinian resistance – culminated in a vicious spiral of violence and counterviolence.

In calmer times, however, such protests are not the number one priority for Palestinian youths. A recently published field report by the German Arab Studies expert David Kreuer shows that young people vastly prefer cultural self-assertion to armed struggle as an act of resistance.

The Leipzig-based academic spoke to young Palestinian men and women living in Ramallah. When it came to discussing the matter of resistance, the participants (some of whom hailed from other cities in the autonomous Palestinian territories), constantly spoke about the dilemma they faced in reconciling private interests with national obligations. The issues of emigration and of working in an Israeli settlement in particular highlighted the inner conflict between the desire for mobility and the pressure to remain loyal to one's own people. 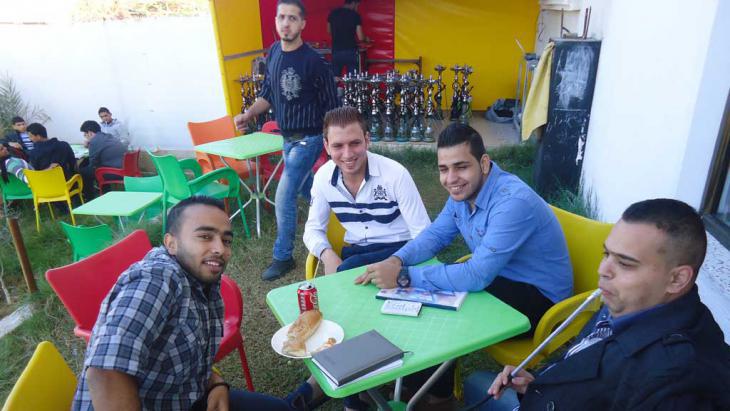 Young Palestinians in a café in Gaza in 2012. According to a study conducted by David Kreuer, many Palestinians see the decision to stay in the Palestinian territories as a form of resistance, even if financial necessity forces them to work for the Israelis

It became clear that the simple act of remaining in their homeland is in itself seen as a form of resistance to Israeli occupation, even if it means that basic financial necessity forces them to work for the Israelis. Kreuer explains that the reason why his respondents frequently established a link between education and culture on the one hand and national resistance on the other is because most of them were students.

Such views frequently stem from the conviction that in view of Israel's vastly superior military might, armed struggle is ultimately pointless. "It will just lead us nowhere," said Sophie, a student from Hebron, making her position quite clear. "On the contrary, it will only drag us down even further."

It appears that many share the view that education, art, literature, theatre and studying the national Palestinian heritage are a more effective form of resistance than resorting to the force of arms. Sophie also sees a more fundamental reason to focus on education and culture, and that is, as she puts it, "the search for more humanity within ourselves."

Statistics support the claim that an exceptionally high number of young Palestinians are engaged in art and pay an active role in its promotion. One example of this phenomenon is the "Mobile Cinema" project initiated by the Palestinian film producer Yousef Al-Deek in 2008. With the assistance of students from Ramallah, films are screened for the general public outside the cities and in remote villages in an effort to counteract the desolate situation regarding local cinemas (most cinemas in the territories have been closed one after the other since 1989).

Even if it is only a matter of introducing the public to films by Palestinian directors or to works dealing with Palestine, the screening of such films is seen as an act of national resistance. So too are projects that document traditional Palestinian folk music and dance, in which students are also involved. 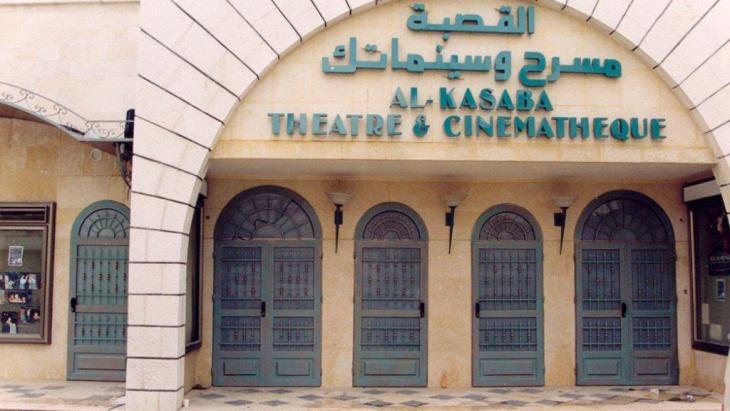 A centre for art and creativity in the Palestinian territories: the Al-Kasaba theatre in Ramallah is one of the few facilities in the West Bank where dramatists, actors and film-makers have the chance to produce and stage plays together

Influence of the diaspora

Kreuer noticed that it wasn't always a matter of individual conviction that motivated young Palestinians to engage in resistance. Quite often, it was also a sense of social pressure that sometimes even led to an attitude of intransigence. In order to give the young people the opportunity to express themselves freely on the issue of resistance, the researcher also conducted an Internet survey in which 112 people from the territories and from Israel took part. More than half of the respondents were at school or university.

The responses showed that the dominant belief among respondents was that in order to do something for Palestine, it is first necessary to develop a strong personality and, if possible, get a good education. This position was influenced not by typical factors such as gender, age, schooling, or occupation, but rather experience abroad.

Participants in the survey from the Palestinian territories tended to give priority to issues like mobility and personal development, while others, who claimed to have spent "the most important time of their lives" in the diaspora, focused instead on the rhetoric of resistance.

Kreuer surmises that this finding should not only be attributed to the experiences of those who have returned home after living in freedom, but that it is also possible "that the traditional discourse on resistance has above all been kept alive in the diaspora, while it has been replaced by another narrative in the occupied territories."

Home
Print
Newsletter
More on this topic
The Gaza conflict: Can art heal in a time of war?Israeli–Palestinian dialogue in Germany: It is possible to work togetherWebsite of the Palestinian Social Cinema Arts Association
Related Topics
Arab cinema, Art, Education, Gaza War, Middle East peace process, Theatre in the Arab world
All Topics

Jordanian author Amjad Nasser, who died in 2019, presents an impressive tale of homelands, life in exile and the hardships of returning home. His profound eloquence and use of ... END_OF_DOCUMENT_TOKEN_TO_BE_REPLACED

In 2012, fed up with people expressing clear-cut opinions on the rights and wrongs of the Middle East conflict, Canadian conflict researcher and long-time Israeli resident Corey ... END_OF_DOCUMENT_TOKEN_TO_BE_REPLACED

In his most recent book, "Trust in Divided Societies: State, Institutions and Governance in Lebanon, Syria and Palestine", political scientist Abdalhadi Alijla writes that not ... END_OF_DOCUMENT_TOKEN_TO_BE_REPLACED

END_OF_DOCUMENT_TOKEN_TO_BE_REPLACED
Social media
and networks
Subscribe to our
newsletter