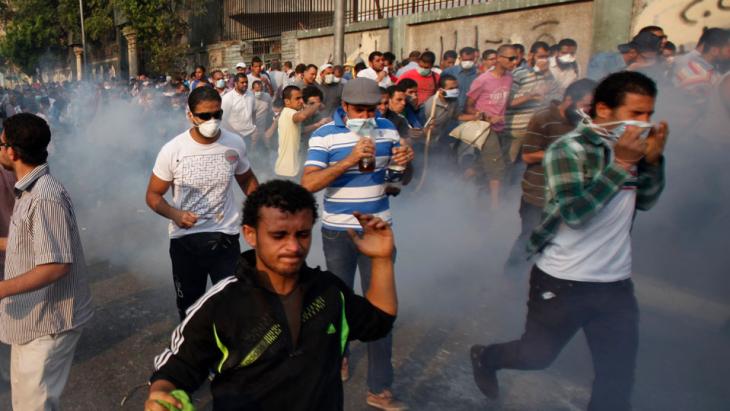 The spiral of violence In Egypt continues. Dozens of former President Morsi's supporters have died during protests. But those responsible for the deaths are not likely to face legal consequences for their actions. Markus Symank reports from Cairo

Ali's enraged voice sounds through the narrow streets of the working class neighbourhood of Fustat in Cairo. The young IT technician leads one of the Muslim Brotherhood's Sunday protest marches. Hundreds of people have joined – men, women and children. The demonstrators are heading toward Tahrir Square, located four kilometres away in the heart of the city. Supporters of the army have already gathered there to celebrate the 40th anniversary of the 1973 war against Israel.

"Down with military rule! Down with the slaves of the military!" chants Ali. The marching crowd echoes his calls.

Just minutes into the march, the demonstrators are held up. A group of youths blocks the way while neighbourhood residents throw rocks and bottles at the Muslim Brotherhood supporters. A teenager wearing flip-flops and a washed-out t-shirt suddenly pulls out a pistol and shoots in the direction of the Islamists. Shortly thereafter, the wind carries tear gas into the streets and riot police converge on the scene. The crowd is broken up.

On the brink of civil war

Sunday's demonstrations are the largest in weeks. Yet not a single protest march reaches Tahrir Square. Instead, more than 50 demonstrators lose their lives nationwide, most of them in street battles in Cairo. Doctors report that most of the victims died of bullet wounds. The Muslim Brotherhood brands the incident as another "massacre". The government calls the violence a "continuation of the fight against terrorism". 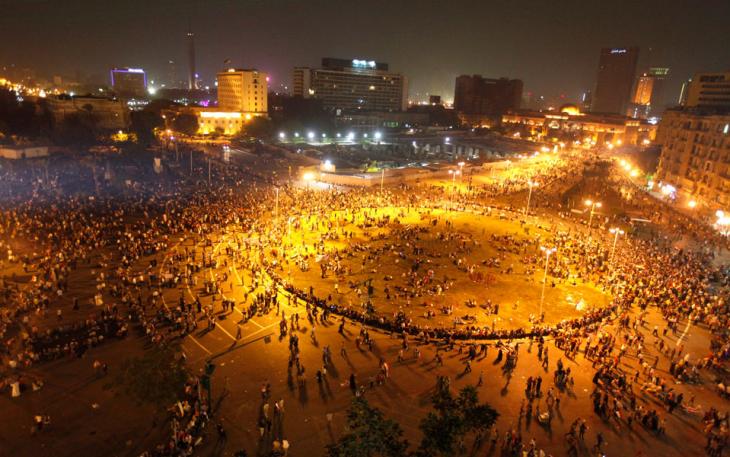 Since the fall of President Mohammed Morsi three months ago, a large portion of the violence directed at Islamists has come from non-Islamist civilians. The clashes between Morsi supporters, neighbourhood residents and violent gangs go on in many places deep into the night.

Gamal Naggar is one of the people who tries to block the Islamist protests.

"The police only watch their own facilities – that's why we protect our houses, stores and loved ones by ourselves," says the mechanic, with an iron bar in hand.

Naggar is from the Nile island of Manial, where clashes left many dead in recent weeks. He says he will leave the demonstrators alone as long as they are peaceful.

Many opponents of the Islamists show no such restraint. There have been brutal attacks on Islamist demonstrators in many Cairo neighbourhoods. Witnesses report that residents have opened fire on Morsi supporters under the cover of the security forces.

The assaults are a result of regime rhetoric. People who demonstrate against the army on a national holiday act in the name of foreign spies, warned a spokesman for interim President Adly Mansour. In a video that recently surfaced, army chief Abdel-Fattah el-Sissi assures the security forces that they don't have to fear legal consequences should demonstrators die as a consequence of their operations. 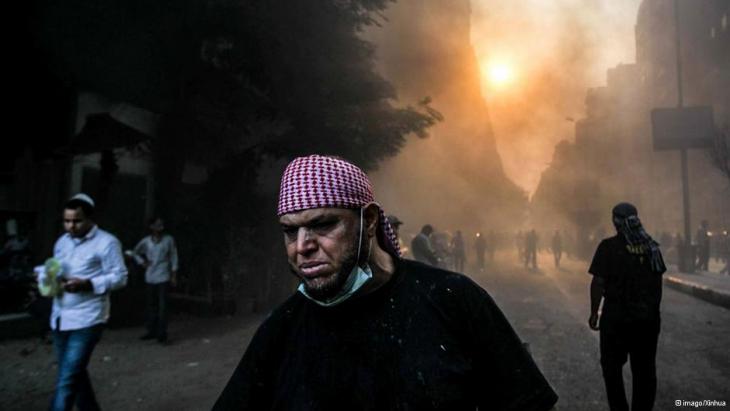 "He publicly announced that no officer will be brought to court, even if he kills demonstrators or shoots them in the eyes," rails a member of the Muslim Brotherhood. "He's egging on the security forces this way."

'Bring the economy to its knees'

But there are also incidents of Islamist demonstrators assaulting supporters of the army. In the city centre, Islamists beat the well-known television moderator Bothaina Kamel, the only woman in the country to have registered to run for president.

Almost all of those killed on Sunday (6 October 2013) were Morsi supporters. In the current climate of impunity, the security forces and civilians who support the transition government don't have to worry about consequences. There have not been any independent investigations into the alleged massacres of Islamist demonstrators in the past few months.

Despite all that, the Islamists refuse to back down. For many, it's no longer about reinstating Mohammed Morsi as president. Instead, it's about sabotaging the new rulers.

Mahmud, a long-time member of the Muslim Brotherhood, hopes that the ongoing protests will bring the economy to its knees and that the people will blame the government.

"I personally believe that the military coup will be defeated by the bad economic situation," he says. "Like it happened in Turkey once before."

The Muslim Brotherhood is clearly ready to accept further heavy losses among its own ranks to achieve this goal. They have already called for new nationwide demonstrations this Friday.

The past enthusiasm of the Egyptians lives on in the Iraqis of today. But just as they were nine years ago in Cairo, current prospects in Baghdad are dim. A comparison by Birgit ... END_OF_DOCUMENT_TOKEN_TO_BE_REPLACED

Insults directed against Egyptian President Abdul Fattah al-Sisi have been particularly prominent among the hundreds of chants by Arab protestors in Algeria, Sudan, Iraq and ... END_OF_DOCUMENT_TOKEN_TO_BE_REPLACED

Political analyst Taqadum al-Khatib argues that Egypt can, in co-ordination with its European partners, develop a common vision to solve the complex conflict in Libya. For this to ... END_OF_DOCUMENT_TOKEN_TO_BE_REPLACED

The upheavals of the past year in the MENA region are arguably as momentous as those of the Arab Spring in 2011. Yet perhaps the biggest difference is that our interest seems to ... END_OF_DOCUMENT_TOKEN_TO_BE_REPLACED

END_OF_DOCUMENT_TOKEN_TO_BE_REPLACED
Social media
and networks
Subscribe to our
newsletter