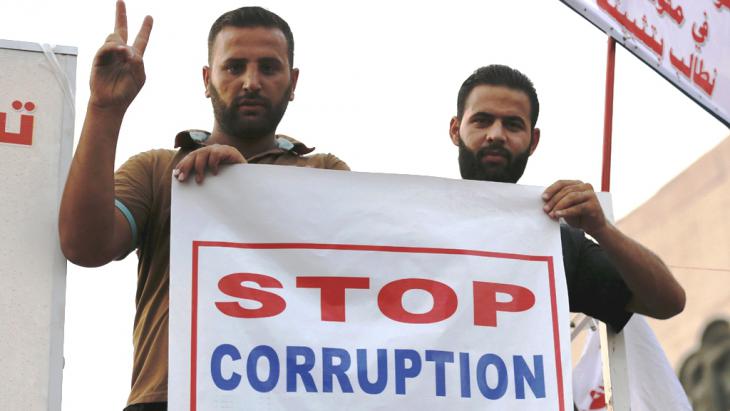 Protesting corruption and mismanagement in Iraq
Caught in the spotlight

Haider al-Abadi′s faltering reform programme and the effects of partial IS occupation are being thrown into stark relief by the latest wave of protests against corruption and government inefficiency in Iraq. By Chiara Cruciati

It started with the soaring temperatures of the Iraqi summer and blackouts leaving people with no air-conditioning. Then there were the more deeply-rooted and structural problems of Iraq′s post-Saddam political class. So August became a month of anti-corruption protests, also aimed at the lack of services, politically imposed sectarianism and the lack of wealth redistribution. Those who took to the streets this time, however, were not members of the Sunni but rather of the Shia community. Loud demonstrations could be heard on the streets of Baghdad, Karbala, Najaf, Nasiriyah and Basra.

Thousands of Iraqis initially applauded Prime Minister al-Abadi′s efforts and the reforms implemented at the beginning of August. But the energy to reform waned quickly, the administration worn out by the Islamist offensive being waged by IS, as well as by the ongoing institutional and political stalemate. For years Iraq has infamously held pole position at the top of the global league table for internal corruption, which, added to the absence of any planned reconstruction, is playing into the hands of jihadist propaganda.

The latest demonstrations have spawned a spontaneous protest movement, at the present time confined to a handful of cities. It draws on the many different facets of Iraqi society, ranging from secular and religious movements to individuals, liberals and communists. It is a movement flying just one flag – the Iraqi flag.

Iraq′s political establishment with its nepotism and different factions is proving an obstacle to change. It has the country in a stranglehold, at the same time preventing implementation of the reforms called for by Prime Minister al-Abadi. In contrast to the nepotism favoured by his predecessor Nouri al-Maliki, the premier has been calling for transparency and honesty for over a year. For the moment it seems all his attempts have been in vain – slowed inevitably by the Islamist invasion of a third of the country and resistance from Iraq′s many covert centres of power. 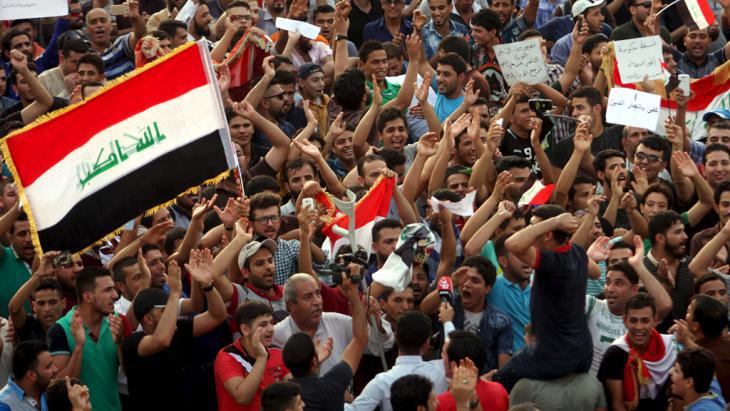 Forced to make swingeing political reforms: following weeks of demonstrations, Prime Minister al-Abadi presented a package of anti-corruption and structural reforms which was agreed upon unanimously by parliament. The cabinet has been reduced by a third. Moreover, he pushed through the monitoring of state property sales and rentals. Illegally purchased real estate is to be returned to government ownership

The most recent announcement on Friday 28 August concerning the re-opening of Baghdad′s Green Zone is at best symbolic. Rescinding the closure of an area that has been fortified for over a decade is intended to indicate a return of authority to the central government, which is trapped between more or less antagonistic political and paramilitary groups. Since the Green Zone also contains the foreign embassies (including that of the U.S.), Iraqi administrative and military offices as well as the state parliament, it is also of tangible benefit.

It is a decision that followed parliamentary approval of the premier′s reform package. The latter envisages abolishing one third of the government′s ministries, slashing many deputy ministerial and secretarial positions, curbing the worst bureaucratic excesses, promoting greater transparency in the administration of state power, fighting corruption and supporting judicial inquiries. These are brave decisions, but they will have little impact on the internal balance of power as the parliamentary majority is firmly in the hands of the Shias (52% of seats), with Kurds holding 17% and the Sunnis 21%.

Western media is paying little attention to an issue fraught with explosive potential. This protest movement may be popular and anti-sectarian, but it also features elements that are potentially divisive. Firstly there is the well-known Shia religious leader Muqtada al-Sadr, who last week rallied his Peace Brigades, not to mention the former Mahdi army, which caused so much unrest during the post-Saddam U.S. occupation. After Friday prayers, hundreds of al-Sadr′s supporters were in Baghdad to mingle with the thousands of protesters, thereby adding a religious element to the Iraqi flag in a clear attempt to hijack the protest. To date, however, political activists and supporters belonging to the movement have managed to quell any such attempts to muscle in on the demonstrations. 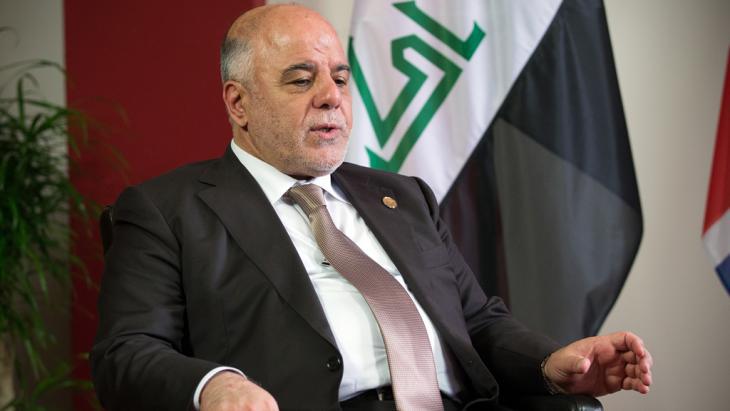 Iraq′s prime minister, al-Abadi, is coming under pressure not only from IS but also from popular anti-corruption demonstrations. Among other things, his reform package foresees the creation of a commission to investigate bribery allegations involving government officials. Corruption and mismanagement under al-Abadi′s predecessor, Nouri al-Maliki, are cited as reasons for the collapse of the security forces as IS invaded Iraq

Speaking in Najaf on Monday 24 August, al-Sadr had said, ″All people and all Sadrists must attend Friday′s protest in Baghdad. Sadrists must join other protesters as one single, Iraqi, national group.″ Commandeering a mass protest would further strengthen the role of the thousand-strong militia – a group that, unlike many other Shia brigades, keeps its distance from Iran, a country clear in its desire to influence political and military decisions in Baghdad.

Shia political parties, torn between supporting and suffocating the movement, are also fighting for influence over the protesters. In both cases the objective is clear: their intention is to prevent the protest from questioning their interests.

Ayatollah al-Sistani, Iraq′s most influential religious personality, recently issued a warning on the potential consequences. Often reluctant to publicly address political issues, al-Sistani came out in support of the efforts made by al-Abadi at the end of August, and warned of the potential danger posed by Iraq′s many internal players.

Many political groups are currently at work in the country to undermine al-Abadi′s reform programme. There are also many who are exploiting the chaos provoked by the presence of IS to increase the already very real internal sectarianism, fomenting a fragmentation of Iraq into ethnicities and religions. This would no doubt benefit those, in Iraq and abroad, whose ultimate aim is an end to national unity and the creation of smaller, weaker federal states, which would thus be easier to control.

Home
Print
Newsletter
More on this topic
Interview with Wilfried Buchta on the rise of IS and the fall of Iraq: "Iraq is irreversibly split"Interview with Iraqi political scientist Ghassan Al-Attiyah: A nation torn apartThe genesis of Islamic State: A new chapter in the decline of the Arab world
Related Topics
'Islamic State' | IS, Economy, Haider al-Abadi, Nouri al-Maliki, Poverty, Saddam Hussein, Shia Islam | Shiite Muslims, Social movements
All Topics

Historically Iraq's Yazidi community was isolated, under-resourced and very conservative. Seven years after the "Islamic State" tragedy, the community is more open to the world – ... END_OF_DOCUMENT_TOKEN_TO_BE_REPLACED

Asef Bayat, professor of Sociology at the University of Illinois, Urbana-Champaign, has been studying revolutions and how they affect people since 1979. In his recent book, " ... END_OF_DOCUMENT_TOKEN_TO_BE_REPLACED

Young people in northern Iraq are so disillusioned that many are trying to leave the country any way they can. Some fear widespread discontent could push people toward potentially ... END_OF_DOCUMENT_TOKEN_TO_BE_REPLACED

In this new bilingual edition, translated by Humphrey Davies, al-Jawbari, one of the thirteenth century's leading experts in skullduggery reveals all there is to know about the ... END_OF_DOCUMENT_TOKEN_TO_BE_REPLACED

In Iraq, returning families of IS fighters have to turn to local initiatives for help, as there is no official path home. Judit Neurink met with families on the ground END_OF_DOCUMENT_TOKEN_TO_BE_REPLACED
Author:
Chiara Cruciati
Date:
Mail:
Send via mail

END_OF_DOCUMENT_TOKEN_TO_BE_REPLACED
Social media
and networks
Subscribe to our
newsletter