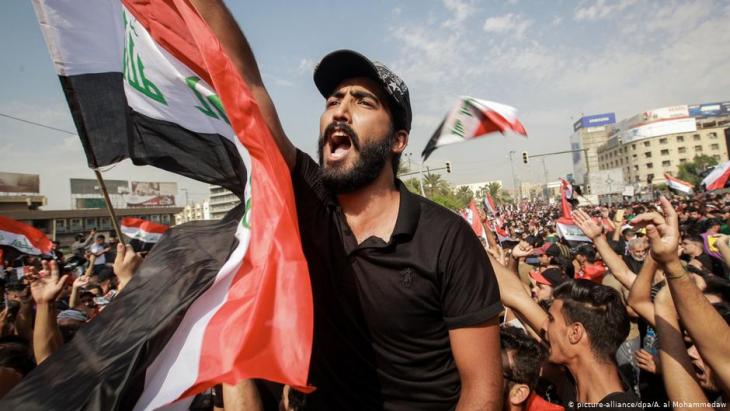 Protesting for reform and an end to corruption

More than a hundred dead and thousands injured: this is the brutal tally thus far of the current unrest in Iraq. Neither the country's political landscape, nor the ubiquitous confessional take on Iraqi politics offer much in the way of explanation. By Karim El-Gawhary

Most of the young demonstrators who are risking their lives simply by daring to take to the streets are not following any political leaders, nor do they have any clear political affiliation. They initially mobilised via social media using the Arabic hashtag equivalent of "Fighting for my rights". What appears to unite them, however, is a profound sense that Iraq offers them no prospects for the future. And for this they hold the ineffective and corrupt state apparatus responsible.

Transparency International’s global corruption index ranks Iraq as the 11th most corrupt nation in the world. Public services are in a catastrophic state. People are especially frustrated by continual power outages, above all in summer when temperatures often exceed 40 degrees Celsius. Cities like Basra have no clean drinking water; thousands of people have had to receive hospital treatment there for drinking contaminated water.

Abandoned by a corrupt state

Youth unemployment stands at 20 percent. That is especially dramatic, because 60 percent of the population is under 24. Every year due to population growth, 700,000 additional jobs must be created to maintain the already desperate status quo. Then there are the problems with the more than sluggish reconstruction of territories destroyed in the war against IS. People feel abandoned by a state perceived as nothing more than a corrupt kraken-like institution.

The protests are aimed at the nation’s entire political elite. They are a continuation of the protest that rocked Iraq last year – remember Basra – but are more radical in nature. Back then, local political headquarters were stormed by demonstrators. This time, protesters have also broken into several television stations. And instead of local power centres, this time the process is also directed at central government. The demonstrators are vociferously demanding its overthrow. 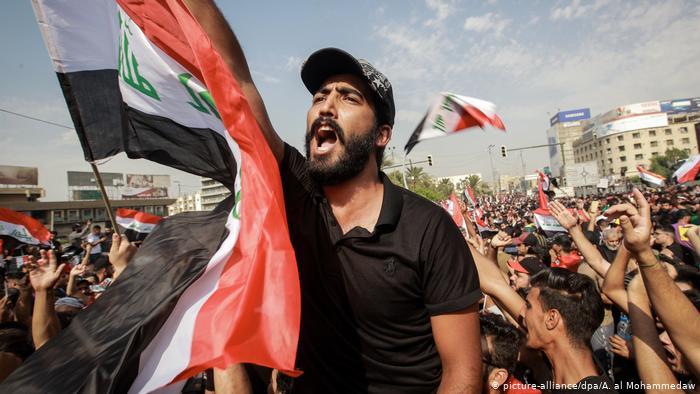 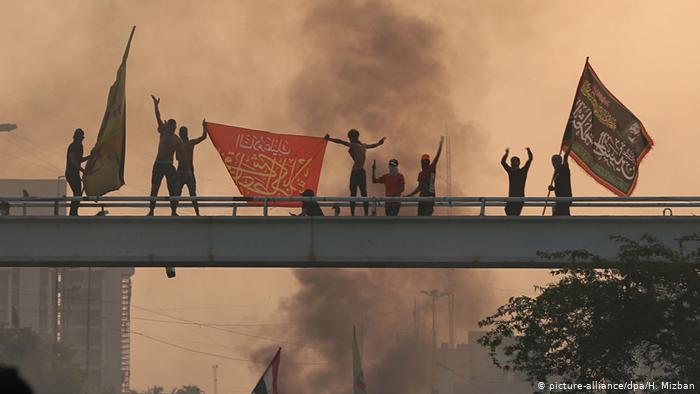 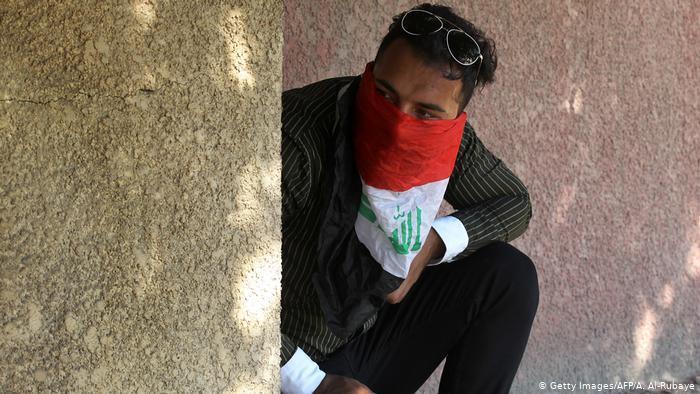 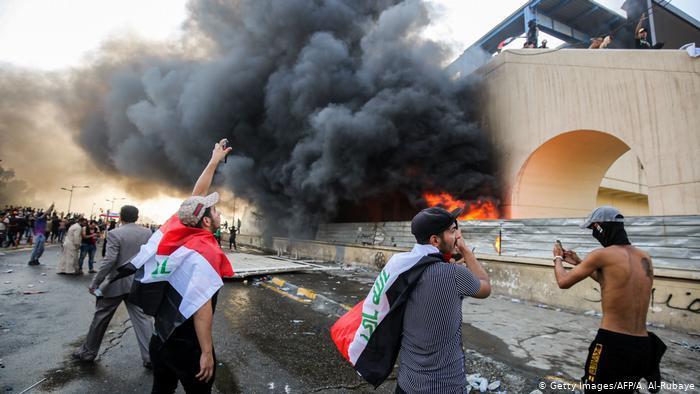 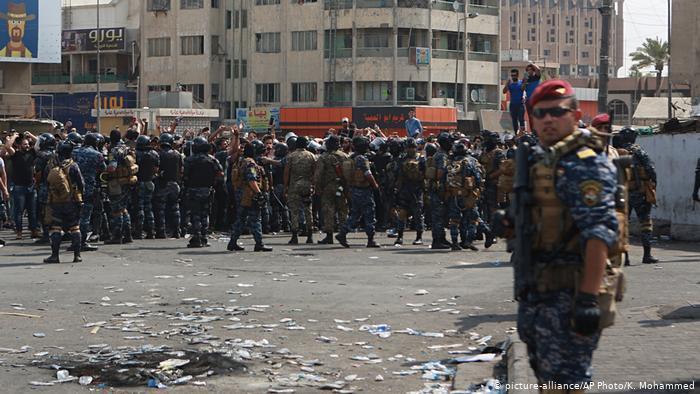 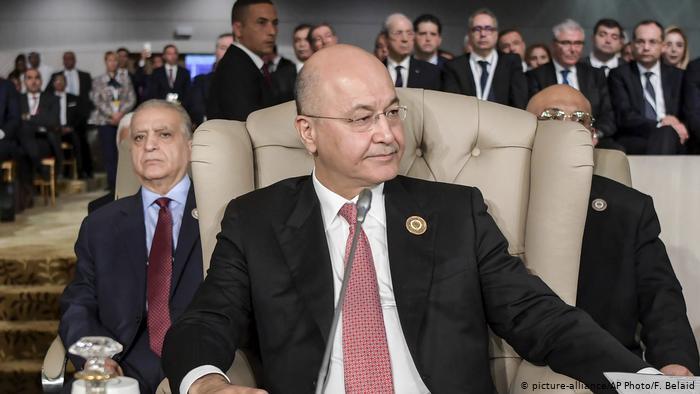 To prevent the demonstrators from organising themselves through social media, the Internet is repeatedly being shut down. This is one of the reasons why relatively little information on these protests is filtering out to the rest of the world.

To date most of the protests are taking place in parts of the country with Shia majorities. Not just in the Shia area of Baghdad, but also in the south of the country, in Nasriya or Diwaniya and Hilla. There, the rallies are aimed at local Shia politicians, but also against the central government in Baghdad dominated by Shia parties. Shias are holding their own political leaders accountable.

The protest is also targeting Iranian-backed Shia militia that set the agenda in administrative offices and ministries. The actions of the militia often come across as arbitrary and self-serving, most being merely concerned with lining their own pockets. Posts and services are assigned to allies or in exchange for bribes. In this capacity they are the epitome of corruption, which is then linked to Iran. The protesters also accuse these militia of being behind the heavy-handed response to the demonstrations.

It is interesting that the nation’s top Shia cleric Ayatollah Ali Al-Sistani has indirectly backed the protesters and called on the government to respond to the calls for reform.

To date, all demands from the people that corruption be tackled have gone unanswered and nothing has been achieved in the process, explains Al-Sistani. Apparently not all Shia spiritual leaders in Iraq are automatically puppets controlled by neighbouring Iran.

The influential Shia cleric and politician Muqtada Sadr, who has repeatedly shown that he can mobilise the poorer members of the Shia community in particular to take to the streets, has so far not directly backed the protests, but called for a boycott of parliament until the government presents reform plans accepted by the people.

Not least, the protests are taking place at a time when many Iraqis fear that a conflict between the United States and Iran could play out in Iraq. The Iraqis say: "When two elephants fight, the grass suffers". They have no desire to be trampled underfoot. 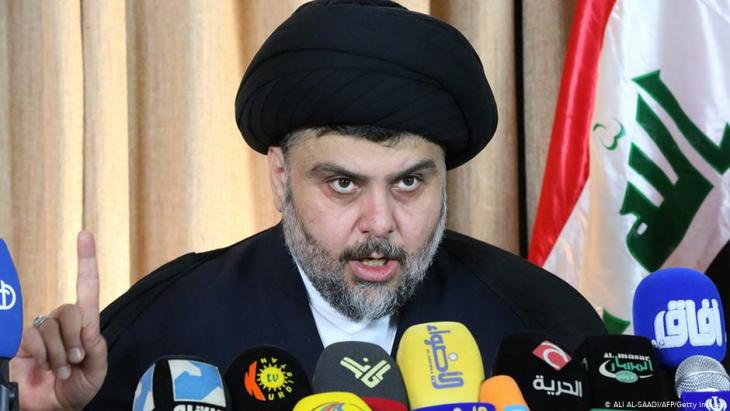 A shot across the bows to the rulers in Baghdad: "to avoid further bloodshed" the government must resign, Shia leader Muqtada al-Sadr wrote in a published letter. There must be early elections under UN supervision. Sadr's faction is the strongest in Baghdad's parliament with 54 deputies. His appeal to the government to resign should give the demonstrators a boost and fuel debate in parliament

The demonstrations in Iraq can also be seen as part of a new protest movement primarily involving young people in the Arab world, a movement also triggered by social and economic factors, whether it be in Algeria, Sudan or, as in the past few weeks, in Egypt.

Against the U.S. and along sectarian lines

In Iraq, there has never been anything like the Arab Spring or an Arabellion as experienced by other Arab nations from 2011. Iraq has never recovered from the rule of Saddam Hussein, the ensuing U.S. invasion and occupation, the civil war and later the war against IS. In all this time, the Iraqis never got a moment to take stock and attend to their economic and social problems.

The U.S. occupation’s perpetual argument that it intended to bring democracy and reforms to the nation, with all the disasters that followed, would have been discredited by any kind of domestic reform movement. The Iraqis were busy fighting against the U.S. occupation and later along sectarian lines against each other.

The irony of the situation is that these latest bloody protests are a sign of normalisation in Iraqi politics. With the end of the war against IS, Iraqis are once again able to reflect on their social and economic problems. Sectarian conflicts between Shias and Sunnis that defined the nation for decades are taking a back seat.

Instead of trying to win back sovereignty against the U.S. occupation and allowing themselves to be incited along sectarian lines, they are now demanding two things above all from their political leaders: their social rights and a functioning state.

Why do so many people in Arab countries trust the armed forces, even though most armies in the region are highly corrupt? Abdalhadi Alijla has the answers END_OF_DOCUMENT_TOKEN_TO_BE_REPLACED

An increasing number of Islamic State returnees are standing trial in Germany, including female supporters of the terror group. To make their case, federal prosecutors are relying ... END_OF_DOCUMENT_TOKEN_TO_BE_REPLACED

The anti-Israeli Quds Day did not take place this year – a first both for Iran and Lebanon's Hezbollah. While Hezbollah leader Nasrallah sees his organisation in a state of siege ... END_OF_DOCUMENT_TOKEN_TO_BE_REPLACED

According to the latest Reuters tally, more than 2.54 million people are now reported to have been infected by the novel coronavirus globally and 177,004 have died. As Muslims ... END_OF_DOCUMENT_TOKEN_TO_BE_REPLACED

While some are beginning to protest the lockdown, others are unable to bury their loved ones in accordance with Islam. Here’s the latest from across the region END_OF_DOCUMENT_TOKEN_TO_BE_REPLACED

From advisories against travel to calls for a new jihad, Islamic State sees the COVID-19 pandemic as an opportunity to exploit. The militants, however, are no more immune to the ... END_OF_DOCUMENT_TOKEN_TO_BE_REPLACED
Author:
Karim El-Gawhary
Date:
Mail:
Send via mail

END_OF_DOCUMENT_TOKEN_TO_BE_REPLACED
Social media
and networks
Subscribe to our
newsletter