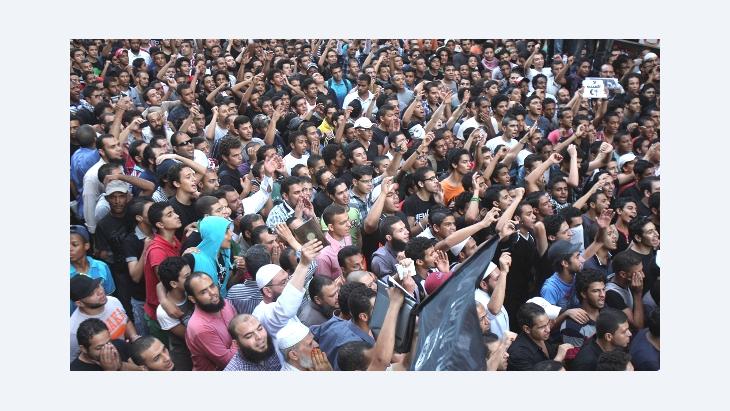 Protests across the Muslim World

The West Will Have to Readjust Its Focus

﻿Protests against an anti-Islam film originating in the US are spreading across Muslim countries. Western powers will have to reconsider their policies toward volatile Arab regions, experts say. Sabina Casagrande reports

Violence has spread across the Arab world in reaction to a film demonstrators said insulted the Prophet Mohammed. Egyptians have been taking to the streets of Cairo, the US Ambassador to Libya was killed earlier this week, and the US Mission in Yemen attacked as well. And the protests are now spilling over into other Arab-Muslim countries.

However, the significance of these protests should not be misinterpreted. Anti-US sentiments have existed in Arab regions for decades, after all. "These protests are only partly about the film," said Jane Kinninmont, Senior Research Fellow at Chatham House in London and an expert on opposition movements in the Arab world. "They reflect more the ongoing volatility in these countries."

What plays a more significant role now is the response to the violence, said Riccardo Alcaro, senior fellow from the Rome-based international think tank Istituto Affari Internazionali. He said the current violence signified more challenges for the newly-elected governments in the region than for the West. 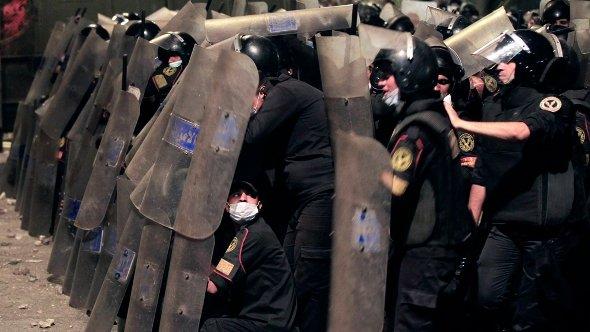 Some analysts say the current violence in the Islamic world signifies more challenges for the newly-elected governments in the region than for the West. Pictured: Riot police take cover from stones that were thrown by protesters during clashes along a road which leads to the U.S. embassy, near Tahrir Square in Cairo

​​Egypt's president Mohammad Morsi, said Alcaro, now has to strike a balance between the public's tendency to regard everything which is related to Islam as holy, such as being blasphemous of the Prophet Mohammed, and his official role.

"Once you are in government, once you rule a country like Egypt, you cannot accept that a video made by somebody in the West and posted on YouTube may have such an impact as to create diplomatic tensions with the United States or European countries," Alcaro said. "So the challenge for these movements is to maintain political support and push religious rivals, the more radical Islamists, to the fringes." At the same time, Morsi's government has to avoid being too critical of the West.

It appears that Morsi has reflected on the implications of his actions. On Friday, the Muslim Brotherhood at the last minute cancelled protests scheduled to take place following Friday prayers.

"It's a fascinating implication," Kinninmont explained after the cancellation was announced. "Being in power forces groups to act more moderately and differently than they did in the past."

Challenge for the West

Isobel Coleman, a senior fellow for US foreign policy at the Council on Foreign Relations (CFR), said the situation in Egypt was "very tricky". "I think both the Egyptian government and the United States government are trying to walk a fine line there," Coleman said at a CFR media conference call earlier this week. 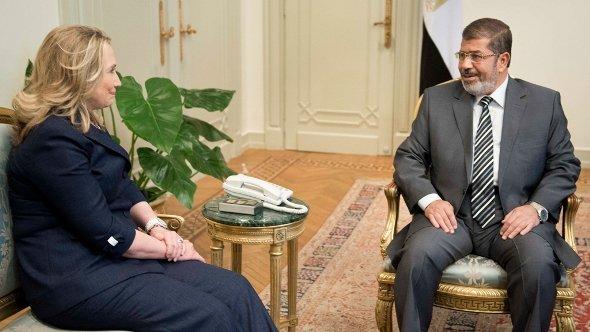 "Support for democracy in the Arab world implies by necessity: find a way to relate to Islamist-rooted political forces." - US Secretary of State Clinton meets with Egyptian President Morsi at the presidential palace in Cairo (14 July 2012)

​​When the Arab revolutions began last year, western nations scrambled to readjust their policies toward these countries. After decades of maybe not supporting but at least interacting with authoritarian regimes and neglecting the opposition, policies had to change. Of course, western nations now have no choice but to support democratic movements in these countries, Alcaro said.

"Support for democracy in the Arab world implies by necessity: find a way to relate to Islamist-rooted political forces, particularly the Muslim brotherhood in Egypt and its sister parties across the region," Alcaro said. "This is not an easy task. So the first challenge for the West is how to relate to these movements, how to support their democratic credentials in countries where these Islamist movements are the most important political forces without compromising on their own values."

This has become clear in the case of the latest film which sparked violence and protests across the Muslim world. Though US Secretary of State Hillary Clinton sharply criticized the crudely made video as "disgusting and reprehensible", she reiterated the country's commitment to freedom of speech.

Kinninmont said that initial contact between Washington and the new government in Cairo had been promising in continuing the "absolutely strong US ties" to Egypt. "But from the point of view of the Muslim Brotherhood, it wants to be treated more as an equal partner and not simply implement US foreign policy," she said.

Indeed, western powers – so the US and Europe – seemed to have decided that the strategic imperative was to reach out to Islamist movements in the region, Alcaro said.

"This is the biggest change to US and European policy toward the region we have witnessed so far," he said. "But the West has been doing that without really thinking about the implications. The West, especially the US, is trying to reconstruct regional relations in a way that allows it to continue to pursue the same foreign policy objectives it has been pursuing in the last 30 years." But this can no longer be taken for granted, the Italian policy analyst said. "It should be clear to Washington that the government in Cairo is becoming more influential in the region and more autonomous from international pressures."

"It's not that I'm saying the US has to reverse its course. But certainly it will be called on to adjust and if it won't do that, the price it might pay is worsened relations with Egypt and raise the influence exerted by Saudi Arabia, Qatar and other Gulf countries," Alcaro said.

Home
Print
Newsletter
More on this topic
Protests against Mohammed film in the Arab World: Adding Grist to the Salafists' MillProtests across the Muslim World: ''Deep mistrust towards the West''The Arab Spring and Political Change: Are Arabs Capable of Democracy?
Related Topics
All Topics
Date:
Mail:
Send via mail

END_OF_DOCUMENT_TOKEN_TO_BE_REPLACED
Social media
and networks
Subscribe to our
newsletter