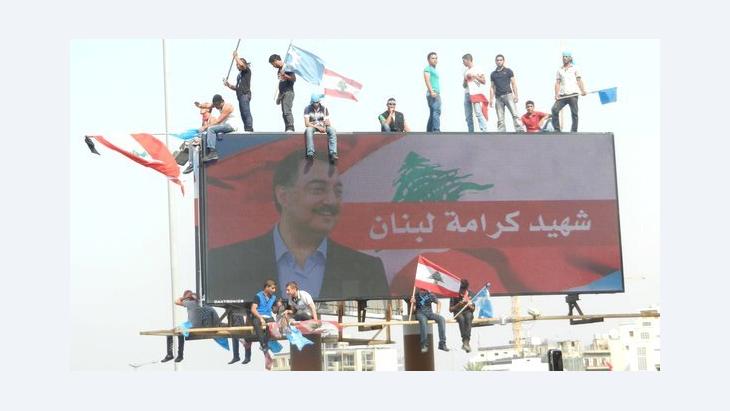 Protests against Assad in Beirut
Unrest and Political Uncertainty in Lebanon

﻿Lebanon remains in shock after the country's domestic intelligence chief was killed in a bomb attack. ﻿For the Lebanese opposition it was clear right away that those who planned the assassination were to be found in the Syrian capital Damascus. Mona Naggar reports from Beirut

﻿Thousands of Lebanese came to Martyrs' Square in Beirut on Sunday to mourn domestic intelligence chief Wissam al-Hassan. Many saw the 47-year-old al-Hassan, who supported the opposition, as someone who guaranteed security in an unstable country. He led an intelligence agency that neither answered to Hezbollah, nor was infiltrated by Syria.

Many on Martyrs' Square waved the Lebanese flag, while others held opposition flags. The speakers blamed the Lebanese government led by Najib Mikati, a Sunni, for the bomb attack. Then TV journalist Nadim Qutaisch, sympathizer with the Sunni and anti-Syrian movement, took the microphone and called on the young listeners to topple Mikati. 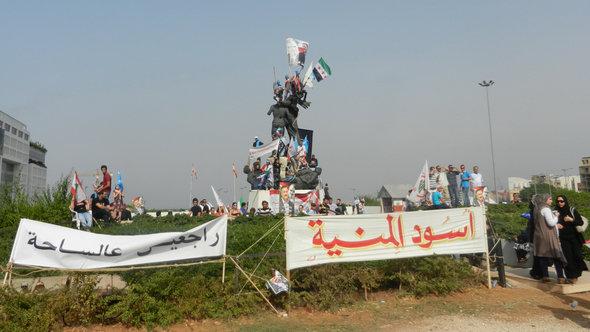 The anger of the people on the street was directed mostly against the Lebanese governemnt, in power since June 2011. It consists of Shiite, Christian and Muslim politicians. The majority still feel excluded because much of the political power is in the hands of the Shiite Amal and Hezbollah movements

​​Then clashes followed between young men and security forces close to the Grand Serail, government headquarters. Rioters threw stones and bottles at uniformed forces. The army answered with teargas and warning shots, while political leaders tried to bring the situation under control. On television, Saad Al-Hariri, leader of the Future Movement, called on his supporters to keep calm.

﻿"A national, human and moral duty"

But like Abdalkarim most people demonstrating on the square do so peacefully. Abdalkarim said al-Hassan's murder came as a shock to all honorable people. He argued that al-Hassan pursued all those who tried to endanger the country's security. "Every man who loves his country should take part in this demonstration. It is a national, human and moral duty," said Abdalkarim.

A group of young women who also gathered on Martyrs' Square took a similarly clear position. Salma said she and her friends were demonstrating against the Syrian regime and its supporters in Lebanon. "The government has to be brought down, and then a new government will be installed and things will improve," she said.

But Fahd Al-Khalil's voice sounded resigned as he held up the Lebanese flag. "It's enough. We are simply fed up with death and destruction and all this hatred everywhere," he said.

Beirutis is still paralyzed after the murder of al-Hassan. Many schools are shut, the main streets are conspicuously empty. Over the last few days, protests have repeatedly started up in different neighborhoods in the western part of Beirut. Enraged supporters of the Future Movement block streets, setting fire to car tires or trash cans. 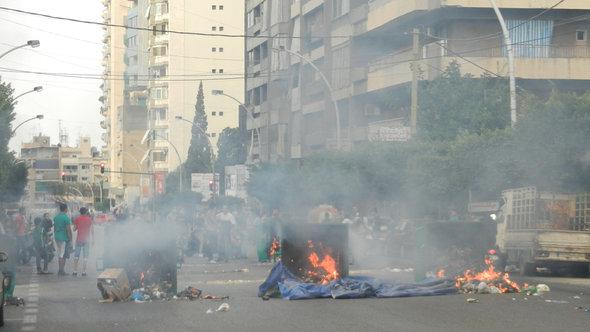 It's not only the tensions between the religious communities that are causing trouble in Lebanon, but also the relationship the different political forces have with the regime in Syria. The strongest ally of Damascus is Hezbollah. The opposition however, with the Sunni Future Movement, is critical of Syria

​​The assassination came two and a half months after Michael Samaha was arrested and charged with planning bomb attacks in Lebanon at the behest of Syrian President Bashar Assad. Al-Hassam was responsible for Samaha's arrest. For the Lebanese opposition, the March 14 alliance, made up of both Sunni and Christian parties, it was clear right away that those who planned the al-Hassan assassination were to be found in the Syrian capital Damascus. But politically, they hold Prime Minister Mikati responsible and are calling on him to step down.

But the opposition, especially the Future Movement, is under pressure. In order to remain credible among its supporters, the Movement's leaders can't go back to business as usual. It is unclear what would follow the fall of the prime minister - the opposition doesn't have the kind of majority needed to form a new government.

The parties dominating the government, the Shiite Hezbollah and the Amal Movement - also associated with Lebanon's Shiite community - remain noticeably quiet. Some Lebanese newspapers report that they have received orders not to allow themselves to be provoked. The motto of the pro-Syrian forces in Lebanon seems to be: Keep calm and carry on.

All hopes rest on President Michel Suleiman. Suleiman, who enjoys a high level of credibility among all political movements, is still backing Mikati - and so the government remains in power for the time being. And everybody is hoping that tempers will calm down during the Eid al-Adha religious festival this weekend.

Home
Print
Newsletter
More on this topic
Assassination of Lebanese Intelligence Chief al-Hassan: Lebanon in Syrian CaptivityTension in Lebanon: In the Shadow of the Syrian RevolutionChristians in Lebanon: Caught between the Frontlines
Related Topics
Arab Spring, Arabellion, Syrian Civil War
All Topics

For a century, the Kurds and other minorities in Turkey have been subject to state repression. With his dissertation "The Kurdish Question in Turkey", political analyst Ismail ... END_OF_DOCUMENT_TOKEN_TO_BE_REPLACED

Syria, Egypt, Saudi Arabia and the UAE are among those countries increasingly misusing cybercrime legislation to silence dissent and curb freedom of speech. Could a new global ... END_OF_DOCUMENT_TOKEN_TO_BE_REPLACED

A new exhibition, "Syria – Against Forgetting", at Cologne’s Rautenstrauch-Joest-Museum focuses on Syria's artistic and cultural heritage and pays tribute to the country before ... END_OF_DOCUMENT_TOKEN_TO_BE_REPLACED

This year’s Morgenland Festival opened with the premiere of Kinan Azmeh’s musical theatre piece, “Songs for Days to Come”, based on fifteen poems by contemporary Syrian poets. ... END_OF_DOCUMENT_TOKEN_TO_BE_REPLACED

Longlisted for the 2020 International Prize for Arabic Fiction and now available in German translation, Khaled Khalifa’s novel “No One Prayed Over Their Graves” details lives and ... END_OF_DOCUMENT_TOKEN_TO_BE_REPLACED

Rumi's poems, though generally stripped of their Islamic symbolism, are hugely popular around the world. Yet Islamic mysticism is still very much at the heart of these verses. ... END_OF_DOCUMENT_TOKEN_TO_BE_REPLACED
Author:
Mona Naggar
Date:
Mail:
Send via mail

END_OF_DOCUMENT_TOKEN_TO_BE_REPLACED
Social media
and networks
Subscribe to our
newsletter