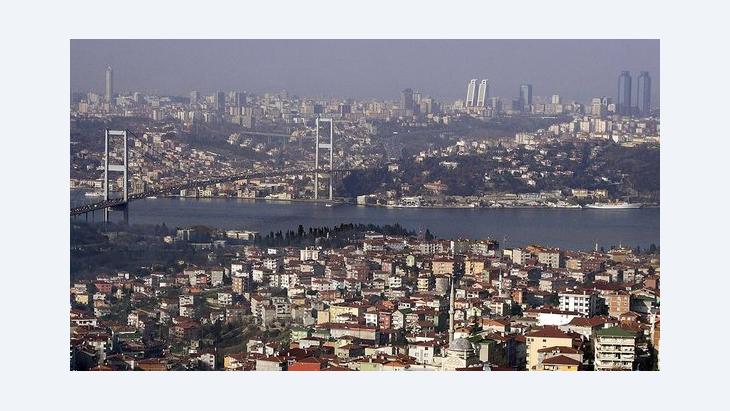 Protests against Construction Projects in Istanbul
A Government Addicted to Superlatives

The unrest in Istanbul is not only an expression of resistance to a misguided urban development policy, it is also a protest against a government that seems to be determined to construct monuments to itself. By Marian Brehmer

What triggered the current demonstrations in Istanbul? They were a response to development plans for Gezi Park, one of the last remaining green spaces in the centre of Istanbul. If Turkish Prime Minister Recep Tayyip Erdogan gets his way, the park will make way for a number of developments, including a new shopping temple. In other words, the trees will be chopped down to help satisfy the never-ending hunger for profit.

It is no surprise that it was a construction project that ignited the protest. After all, the neo-liberal course that the AKP government has been pursuing for more than a decade is most clearly visible in the government-sponsored construction boom on the Bosporus. Erdogan's megaprojects in Istanbul are diverse in nature, yet similar in that they are ﻿all controversial.

Construction boom on the Bosporus

Probably the most questionable plan of all involves the construction of a third bridge over the Bosporus near the point where it meets the Black Sea. On 29 May, exactly 560 years to the day after the conquest of Constantinople by Sultan Mehmet II, Erdogan officially launched the construction project. If and when the bridge is completed, it will be record breaking in its scale. The bridge piers alone will be the tallest in the world. In addition to four lanes of automobile traffic, the bridge will also support rail traffic.

Supporters of the project have argued that the third bridge is necessary for transit traffic: it would make it easier for trucks to circumvent the city centre and would ease the strain on the other two bridges. A study conducted by the Turkish highway association, however, has produced findings that contradict this argument. They point out that transit does not even account for three per cent of traffic and that history shows that it is highly unlikely that the third bridge would relieve congestion on the other bridges.

The 30-kilometre-long Bosporus divides the city of Istanbul into a European and an Asian side. For centuries, urban development has taken place in the lower third of this north-south axis. The construction of the first two bridges over the Bosporus in 1973 and 1988 resulted in decisive changes to the city landscape. New settlements sprang up around the bridges, and the city's population rocketed. As a result, the city grew by two thirds.

Since then, the centre of Istanbul has shifted to areas that only a few decades ago were villages and considered insignificant. Experts are convinced that the construction of a third bridge will result in the final northern third of the city being swallowed up by urban sprawl. New settlements and businesses around the bridge will also cause an increase in the number of cars in the city. Between 1980 and 2010, the number of automobiles in Istanbul multiplied by ten, rising from 200,000 to around two million. 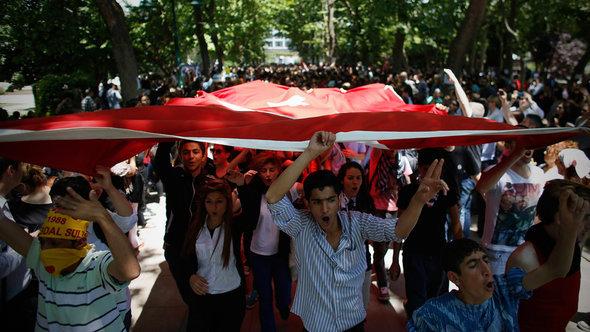 Since the end of May, demonstrations against development plans for the Gezi Park in the vicinity of Taksim Square have been ongoing. Erdogan's party wants to build a reconstruction of an eighteenth-century Ottoman barracks on the site. The intention is that it will house cafés, museums or a shopping centre.

​​The third bridge would therefore place an additional demographic burden on Istanbul. Engin Yılmaz, head of the Turkish environmental organisation Doga Dernegi, goes even further in his criticism. In a commentary for the Today's Zaman newspaper, he wrote that Istanbul would be better served by tearing down the second bridge. He claims that it caused great damage to the city and sparked a population explosion.

Then there is the damage to the environment that conservationists have been warning about for years. The motorway at the end of the new bridge will run right through a sensitive forest area to the north of the Bosporus. This is the last undeveloped area in the greater Istanbul region. It is not only regarded as the green lung of the city, it is also the site of important potable water reservoirs.

An affront to the Alevis

But there is yet another reason for the protests. The Turkish government has decided to name the third bridge after Sultan Selim I, who almost tripled the size of the Ottoman Empire with his military campaigns. Today, he is also known as "Selim the Grim". Selim I was a Sunni fanatic; his main concern was the persecution of Shia groups. He had 40,000 Alevis executed, which explains why the estimated 15-million-strong Alevi community in Turkey views the name chosen for the bridge as an affront.

Although the bridge project is currently attracting the most attention, it is only one of a whole range of megaprojects planned for the northern region of the city. There are plans to complete a third airport for Istanbul on the Black Sea by 2017. Turkish politicians hope that it will become the largest hub in global air traffic.

This plan also poses a huge problem: some 85 per cent of the airport site will be situated on a protected forest area. According to a report by the Turkish Ministry of the Environment and Urban Planning, this will entail cutting down 650,000 trees and "replanting" 1.85 million trees. Other projects earmarked for this region include a shipping canal and a satellite city for 1.5 million inhabitants.

Erdogan aims to achieve another superlative with a project intended for a hill in the Anatolian city district of Camlica. The intention is that the largest mosque in Turkey will soon sit atop the hill covering an area measuring 250,000 square metres.

Here too, modern construction plans are combined with a transfigured understanding of history. The minarets of the mosque will be 107.1 metres high. In the year 1071, the Seljuk Turks defeated the Christian Byzantines, paving the way for the conquest of Anatolia by the Turks. 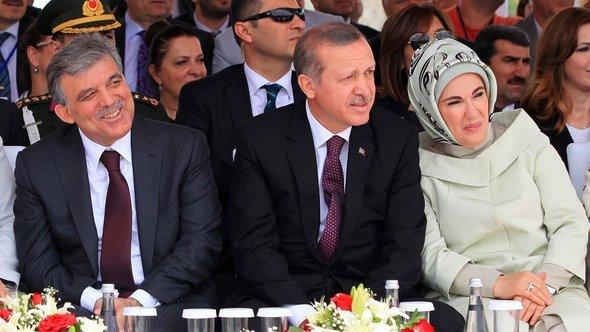 A bridge monument to the AKP: the project envisages a 1,275-metre-long bridge for cars and trains. The bridge is just part of an estimated 80 billion dollar package of new construction projects, which also includes a new, third airport for Istanbul, a high-speed rail link between Istanbul and Ankara and a road and rail tunnel under the Bosporus.

A political party constructing a monument to itself

The fact that the mosque would be visible from anywhere in the city has led critics to assume that the building is not merely intended to be a house of prayer for the Muslim faithful, but rather another monument to the AKP government.

What Istanbul is currently experiencing is its large-scale transformation into a "global city". The idea behind this much-vaunted concept is to turn the city into a hub of world trade and commerce. Multinational companies should feel at home in Istanbul. A great deal of money hangs in the balance; the intention is that Istanbul will rise to the rank of a world-class city.

Then there is Istanbul's campaign to hold the 2020 Olympic Games. Were it to be named host city, it is likely that there would be an even greater building boom. Imre Azem, an activist and director of the film Ekümenopolis, doesn't believe that the city will get the Games. "With all these protests, the chances of Istanbul getting the Games have considerably diminished," he concludes.

Now ﻿– especially since the start of the "#occupygezi" movement – the critical voices of numerous sociologists and conservationists, who have been raising concerns for years, have been joined by the voices of an ever greater number of citizens of Istanbul. Although they are feeling the effects of ﻿the transformation of their metropolis first-hand, these citizens were not consulted about the construction projects. Increasingly, people are being forced out of their neighbourhoods, sometimes violently, under the banner of gentrification.

At the same time, the government has been setting up huge, impersonal and anonymous housing settlements. In other major cities around the world (like Paris and London), similar districts became the breeding ground for social unrest. Even now, urban planners foresee a similar dangerous development for Istanbul.

If the politicians ﻿responsible for the projects do not radically rethink the current policy, it will soon prove difficult for the citizens of Istanbul to breathe. Erdogan, however, is not a man easily moved. Massive pressure will be needed and, perhaps, even a miracle. Now, for the first time in Erdogan's ten-year tenure as prime minister, this pressure has found an outlet.

Relations between Turkey and Russia are ambivalent. Moscow is nonetheless trying to prop up the leadership in Ankara. Elections are to be held in Turkey in June – and the last ... END_OF_DOCUMENT_TOKEN_TO_BE_REPLACED

All eyes in Turkey are on a court hearing scheduled for January 30 into a child abuse case that allegedly occurred with the knowledge of one of Istanbul's most powerful Islamic ... END_OF_DOCUMENT_TOKEN_TO_BE_REPLACED

Any reconciliation between Turkey and Syria’s Assad regime would have disastrous consequences for many Syrians, explains Syria expert Kristin Helberg END_OF_DOCUMENT_TOKEN_TO_BE_REPLACED

The poetry of Pir Sultan once prompted uprisings in the Ottoman Empire. To this day, Alevis identify with him. Rainer Hermann visited Mehmet Celebi, a direct descendant of the ... END_OF_DOCUMENT_TOKEN_TO_BE_REPLACED

There are signs of an imminent normalisation of relations between Turkey and Syria. This would allow Erdogan to score political points domestically before the upcoming elections ... END_OF_DOCUMENT_TOKEN_TO_BE_REPLACED

Turkey will mark the centenary of the proclamation of the Turkish republic in October. But 2023 will be an important year in another respect too: Turks will go to the polls in ... END_OF_DOCUMENT_TOKEN_TO_BE_REPLACED
Author:
Marian Brehmer
Date:
Mail:
Send via mail

END_OF_DOCUMENT_TOKEN_TO_BE_REPLACED
Social media
and networks
Subscribe to our
newsletter