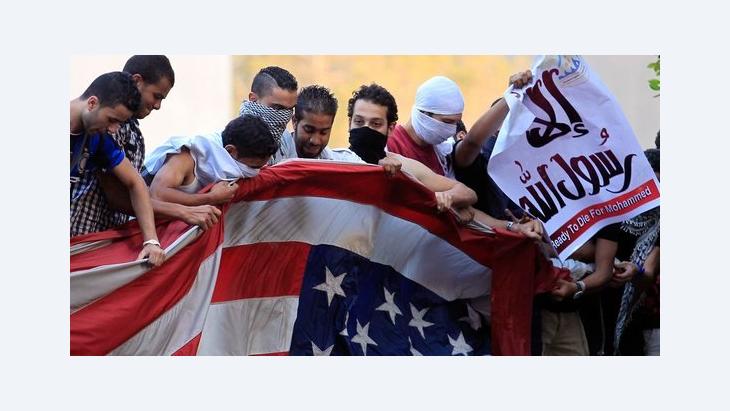 Protests against Mohammed film in the Arab World

Adding Grist to the Salafists' Mill

This is the latest episode of an ongoing saga that sees both western Islamophobes and Arab Salafists upping the ante. It began with a film produced in the US and viewed as a provocation by Muslims, and ended provisionally with four dead at the US consulate in Benghazi. Details from Karim El-Gawhary in Cairo

It was Tuesday morning, and on the day of the anniversary of the September 11th attacks rumours were circulating in Cairo about a US-produced film that denigrates the prophet Mohammed. A short time later, a 14-minute trailer was circulated via Youtube, Facebook and Twitter. Two versions can be seen on the Internet, one in English and one dubbed with Egyptian dialect. The cheaply-produced film shows a devious Mohammed as a crazy, sex-obsessed womaniser who, with his bloodied sword always to hand, calls for attacks on adherents to other religions.

Just as in the case of the row over the Danish cartoons, the Pavlovian reaction was prompt. Various Salafist television channels called on people to protest at the US embassy in Cairo. This was a call primarily issued by Salafist leader Wesam Abdel-Wareth on the Salafist channel he himself directs, El-Hekma.

Several thousand people, most of the Salafists, followed this call and gathered in the afternoon in front of the US embassy, a high-security building in the city centre. A group of youngsters used ladders to scale the walls, break into the garden, haul down the US flag flying at half-mast in memory of September 11th, and burn it. The Stars and Stripes was replaced by a black flag proclaiming the Muslim profession of faith to one God and the prophet Mohammed. 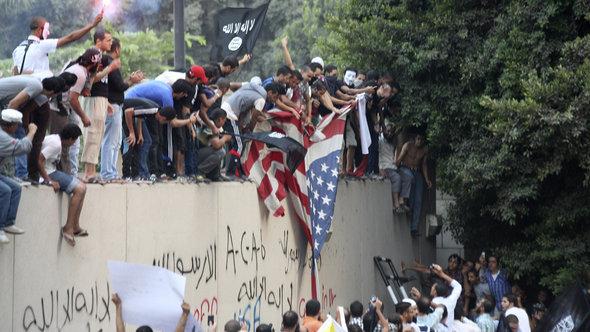 Riot by "supporters of Sharia": Some 3,000 people followed calls by the Salafists and demonstrated at the US embassy in Cairo. Some of the protesters managed to break through security cordons and tear down the US flag

The prelude to further protests

But what happened in Cairo was intended as just a foretaste of what was to occur at other US representations in the region. In Benghazi, a group of armed Salafists describing themselves as "supporters of Sharia" attacked the US consulate with rocket-propelled grenades and missile launchers, setting it on fire.

The US ambassador Chris Stevens, who happened to be present at the time, and three other US State Department officials were killed in the attack. And this in the city where the rebellion against Gaddafi began, and which has the US Air Force to thank for halting a revenge campaign launched by Gaddafi troops militarily superior to the rebels on the outskirts of the city.

The producer of the two-hour film that triggered the violence described Islam as a "cancerous growth". Sam Bacile, a 56-year-old Californian real estate entrepreneur who describes himself as an Israeli Jew, wrote the script. The film was promoted on the website of Morris Sadek, an Egyptian Copt resident in the US and known for his extreme views. 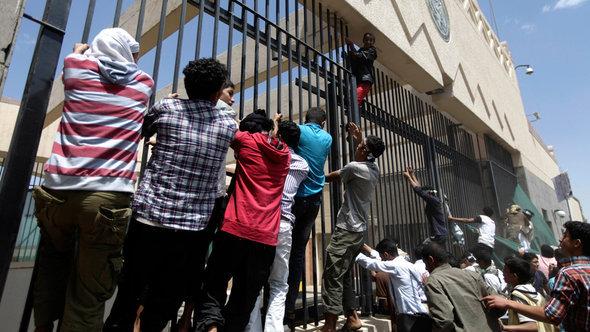 Rising anti-US sentiment in the Middle East: Hundreds also gathered at the US embassy in the Yemeni capital Sana'a to protest at the film vilifying the prophet Mohammed produced in the US, before storming the building

​​This move served to escalate tensions between Muslims and Coptic Christians in Egypt, as several radical Islamic preachers are emphasising the Coptic involvement in the film. Egypt's Coptic community is meanwhile attempting to limit the damage. Medhat Klada, leader of Coptic organisations in Europe, declared that Sadek's views were "not representative of those held by exiled Coptic communities". Sadek is an extremist who incites people in Egypt against Copts, he explained. The Maspero Youth Union, an organisation of young Copts that took part in the uprising against Mubarak, made it known on its website that Sadek represented neither mainstream Coptic patriotism nor Copts within the Diaspora.

Controversy takes on a new dynamic

Unlike the row over the Danish Mohammed cartoons six years ago, this new controversy is taking place in a changed Arab world. And although anger at the film may be considerable across the region, it is the small and vociferous Salafist minority that is seeking to exploit the case to further its political goals and that forms the majority of the demonstrators in Cairo and the attackers in Benghazi. Within Libya and Egypt, this means the controversy is taking on a new dynamic. Ousted dictator Mubarak had always cast the Salafists as the bogeymen, also during the row over the Danish cartoons. Along the lines of: if you don't want any attacks on embassies and western installations, then support me in the name of stability. 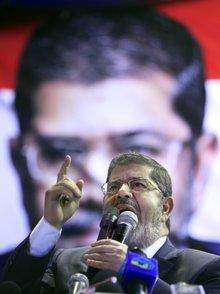 Calls for calm and moderation: "The Egyptian people are very civilised and reject such lawless actions," said Egyptian President Mursi after the attacks

​​Today, Egypt is governed by Mohammed Mursi, drawn from the ranks of the conservative Muslim Brotherhood, holder of governmental responsibility and also therefore responsible for protecting foreign embassies. The Muslim Brotherhood is still attempting to play a dual role, denouncing the film and calling for peaceful demonstrations. Party spokesman Muhammad Ghozlan called on the US government to apologise and punish those responsible.

But if the Muslim Brothers want to retain their governmental responsibility, they cannot leave street-level Islam to the Salafists. The same goes for the newly-elected Libyan government. The controversy surrounding the film and the attacks on US installations represent an initial wake-up call for new democratically-elected Arab governments; a warning that they can no longer sidestep political confrontation with the Salafists. Alongside the economic situation, this will pose the greatest challenge to new rulers in Cairo and Tripoli.

In tackling this issue, they would have the support of moderate Islamists, liberals, the military and western foreign nations. And the whole business would surely be much simpler if it were not for these sporadic Islamophobic provocations from abroad, which only serve to add grist to the extremists' mill.

Home
Print
Newsletter
More on this topic
Escalating Conflict about Prophet Caricatures: Bomb in TurbanSalafists in Egypt: Exploiting the Weakness of the PeopleThe Role of Religion in Egyptian Society: ''Dictatorship is out in Egypt''
Related Topics
Arab Spring, Arabellion, Islam and the West, Islamism | Political Islam, Media in the Arab World, Salafis | Salafism, U.S. policy in the Middle East
All Topics

No other Western poet was arguably so well-versed in the Koran or so fascinated by Islam as Germany's national hero, Goethe. In a new publication that examines all Goethe's ... END_OF_DOCUMENT_TOKEN_TO_BE_REPLACED

A deluge of books, movies, series and cover stories: ever since the events of 9/11, the West has seemed almost manically preoccupied with Islam. Yet this has rarely led to deeper ... END_OF_DOCUMENT_TOKEN_TO_BE_REPLACED

Twenty years after 9/11, the world is faced with the dual challenge of Islamophobia and anti-Westernism. Ahmet Kuru argues that Muslims in the West, well versed in both Western ... END_OF_DOCUMENT_TOKEN_TO_BE_REPLACED

Two decades after the attacks of 11 September 2001, the West faces the shattered debris of its failure – not only in Afghanistan, but also in Iraq, Syria, Libya and Yemen. What ... END_OF_DOCUMENT_TOKEN_TO_BE_REPLACED

Twenty years after 9/11, the United States is recalibrating its war policy. However, its assertions that the era of endless wars is over are a myth, writes Maha Hilal END_OF_DOCUMENT_TOKEN_TO_BE_REPLACED

Migrants are often maligned as being responsible for Europe's problems. Yet their integration is in Europe's interest. Michael Thaidigsmann believes that a long-term vision is ... END_OF_DOCUMENT_TOKEN_TO_BE_REPLACED
Author:
Karim El-Gawhary
Date:
Mail:
Send via mail

END_OF_DOCUMENT_TOKEN_TO_BE_REPLACED
Social media
and networks
Subscribe to our
newsletter