With Mohamed ElBaradei's return to Egypt, demonstrations planned for after Friday prayers and the authorities' restriction of access to the Internet, the situation in Egypt is set to escalate over the weekend. Al-Masry Al-Youm assesses the significance of the protests on 25 January

With Mohamed ElBaradei's return to Egypt, demonstrations planned for after Friday prayers and the authorities' restriction of access to the Internet, the situation in Egypt is set to escalate over the weekend. Al-Masry Al-Youm assesses the significance of the protests on 25 January 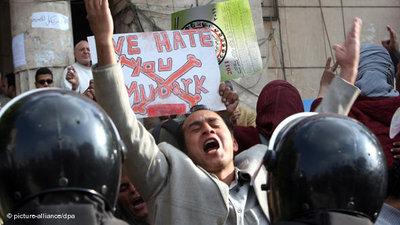 Everyone from high-profile opposition figures, activists and celebrities to workers and even families with children took part in the demonstrations on 25 January, sending a clear signal to Mubarak's regime: "the people want the regime ousted"

​​The 25 January protests which hit Egypt may prove to be a historic turning point for Egypt's small and feckless opposition. The "Day of Rage" saw tens of thousands take to the streets in most major Egyptian cities, with many demonstrations continuing well into the night. The turnout was exceptionally high, by Egyptian standards, and unprecedented in Mubarak's 31-year reign. The recent uprising in Tunisia has inspired a new confidence in many Egyptians that public dissent is effective and their voices need to be heard.

In Cairo, protesters congregated at different points and snaked through various parts of the city, gathering more supporters and effectively evading any security cordons, before finally pouring into downtown Cairo's Tahrir square, where they grew into an estimated crowd of 15,000.

The rally, which was the largest in the country, drew everyone from high-profile opposition figures and activists, to film stars and famed novelists, to working people from the neighbourhood, to whole families with their children.

But more than any other group, it was the throngs of spirited and enthusiastic youth that dominated the gathering. This was their protest. Internet-savvy, largely middle class, and enraged at a regime that gives them much to worry about and little to aspire to, this large segment of Egypt's young population came out to cry for change. And so they did with a sudden upsurge that surpassed many people's expectations.

Contrary to portrayals by Western media outlets and many local analysts of an Arab political opposition that is dominated by an Islamist discourse bent on violence and oppression, most of the protesters were remarkably peaceful and their demands non-sectarian.

As tens of thousands of Egyptians prepare to take to the streets after Friday prayers for the fourth day of protests, Nobel peace laureate Mohamed ElBaradei told the British broadsheet The Guardian that Hosni Mubarak’s regime "is on its last legs"

​​In Tahrir, hardly an Islamist slogan was heard, no displays of religious symbols were apparent and the only leaflets distributed were those bearing the demands of the protesters for the formation of a new government. Just after midnight, as security men forcefully dispersed the protesters from the city's main square, one unified chant could be heard echoing through the streets: "The people want the regime ousted."

The regime's response has been stubborn but crafty. What started off as relative lenience on the part of security forces ended with a midnight shower of rubber bullets and tear-gas canisters on demonstrators in Tahrir that left dozens injured and many more detained.

Meanwhile, Egyptian security imposed a blockade on communication about the protest, shutting down Twitter and UStream, as well as Egypt's three mobile networks over the downtown area.

Online opposition paper Al-Dostour had its website blocked recurrently throughout the day. Today, state-owned newspapers completely downplayed both the size and significance of the event, as if nothing out of the ordinary had taken place.

Perhaps this blackout is being implemented in the hope that the protesters and their grievances will soon disappear. Or, perhaps it reveals just how disconnected the regime is from political realities on the ground that threaten to push this country to the brink of an implosion. As people across the region – in Yemen, Algeria and Tunisia – raise voices of dissent against their governments, the Egyptian regime should be worried about what the future holds in store.

So what next? Will Egypt's burgeoning youth protests escalate? Will they grow into an organised movement? And if so, will it be able to incorporate other social groups or at least build strong bridges with other protesters, especially in the labour sector? Most importantly, will the Mubarak regime concede to any of the demands of Egypt's youth? There are no clear answers yet, and only time will tell.

According to Al-Masry Al-Youm, what started off as relative lenience on the part of security forces ended with a midnight shower of rubber bullets and tear-gas canisters on demonstrators, leaving dozens injured and many more detained

​​What we do know is that the 25 January protest call put Egypt's official opposition – including Tagammu, Wafd and the Muslim Brotherhood – on the defensive as all these groups wavered between hesitant support and outright refusal to take part in the event. The "Day of Rage" may prove to be the catalyst needed to divide these parties internally and raise the level of politicisation among their younger cadres. This would be no small legacy.

The Tunisia fever is spreading rapidly across the Arab world. Many have argued that a Tunisia-style uprising is unlikely to be replicated in Egypt due to fundamental differences in the composition of the regimes and societies of both countries. But Egyptians yesterday demonstrated their political versatility and impressive capacity to defy the restraints imposed upon them by a strong security state.

Perhaps the "Tunisia model" does not threaten to bring down the Mubarak regime any time soon. But it does have the potential to transform Egypt's opposition into a larger, more spontaneous and more inclusive movement that is capable of mounting serious political challenges to the regime in the future.

Al-Masry Al-Youm is an independent Egyptian media organisation established in 2003.

Parliamentary Elections and the Mubarak Regime
Long live the Pharaoh!
The present election results, however, will make it rather difficult for the Egyptian regime to portray the poll with a democratic sheen. Europe should take critical notice of this fact and, as a direct result, undertake an examination of its policies towards Egypt, writes Egypt expert Thomas Demmelhuber

Parliamentary Elections in Egypt
No Chance for the Opposition
Despite an Egyptian government promise to hold free and fair elections, Sunday's poll has been marred by reports that voters were prevented from casting their ballots and that ballot papers were forged en masse. Human rights organisations also say some polling stations were the scene of violent clashes. Amira El Ahl reports from Cairo

Two refugees detained in Egypt are facing deportation to Eritrea. The expulsion of the Eritreans, who have been incarcerated in Cairo for more than eight years, has been halted ... END_OF_DOCUMENT_TOKEN_TO_BE_REPLACED

International relations are shifting across the Middle East as regional powers adapt to America's retrenchment and China's growing influence. Although the region could become the ... END_OF_DOCUMENT_TOKEN_TO_BE_REPLACED

Germany's foreign policy is explicitly values-based. But what happens, Ralf Bosen asks, when democracy, the rule of law and human rights collide with the logic of trade and ... END_OF_DOCUMENT_TOKEN_TO_BE_REPLACED

"The people aren’t ready for democracy" has been the constitutional basis for Arab tyranny, its favourite slogan and its sacred narrative for more than a century. Yet, asks Khaled ... END_OF_DOCUMENT_TOKEN_TO_BE_REPLACED

A new global database shows a significant gap in reported COVID-related deaths, suggesting the actual worldwide death toll is short by at least 1 million. That's due in part to ... END_OF_DOCUMENT_TOKEN_TO_BE_REPLACED

Two decades after the attacks of 11 September 2001, the West faces the shattered debris of its failure – not only in Afghanistan, but also in Iraq, Syria, Libya and Yemen. What ... END_OF_DOCUMENT_TOKEN_TO_BE_REPLACED
Date:
Mail:
Send via mail

END_OF_DOCUMENT_TOKEN_TO_BE_REPLACED
Social media
and networks
Subscribe to our
newsletter