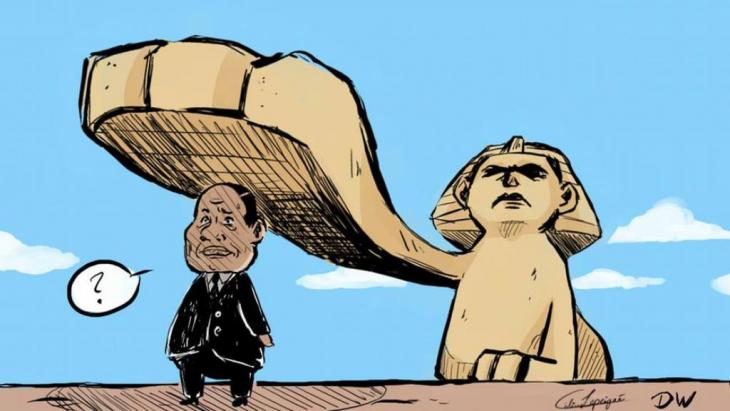 The protests in Egypt against Sisi’s regime have revealed not only his decline in popularity, but also the fragile nature of the military regime. The latter launched a hysterical campaign of arrests, turning the streets and main squares into military barracks in order to prevent mass anti-Sisi demonstrations. Analysis by the Egyptian researcher Taqadum al-Khatib

Egyptian President Abdul Fattah al-Sisi has built his legitimacy at home on two key issues: restoring stability and security, and improving the economy. So far he has succeeded in neither respect.

Instead of focussing on the fight against terrorism in the Sinai, Sisi allied himself with Salafists from the Islamic mainstream. He spread state terrorism through the use of weapons to kill peaceful Muslim Brotherhood supporters in the slaughter of Raba'a al-Adawiya Square. Described as the most heinous massacre in modern Egyptian history, hundreds of people were killed indiscriminately and thousands wounded. It included enforced disappearance, arrest and torture of dissidents, civilian and military, as well as human rights violations on a scale which Egypt has not seen in recent times.

The massacre was accompanied by a brutal security crackdown, and Sisi asserted control over the security institutions through his son, who serves as deputy head of the General Intelligence Service (GIS). It was followed by a sharp economic downturn and an increase in the rate of poverty to 32.5%. In other words, one third of the Egyptian people live below the poverty line.

You may also like: Egypt's economic disarray – Whether to topple President Sisi...

The crackdown coincided with failures in foreign policy, the decline of Egypt’s role in the region, dependence on Gulf aid, surrender of its historic right to the Nile waters, and the sale to Saudi Arabia of the strategic islands of Tiran and Sanafir in exchange for financial assistance and international support from the Saudi and Emirati lobbies. The period also saw the systematic corruption and squandering of public money by the president, his family and those in his inner circle. 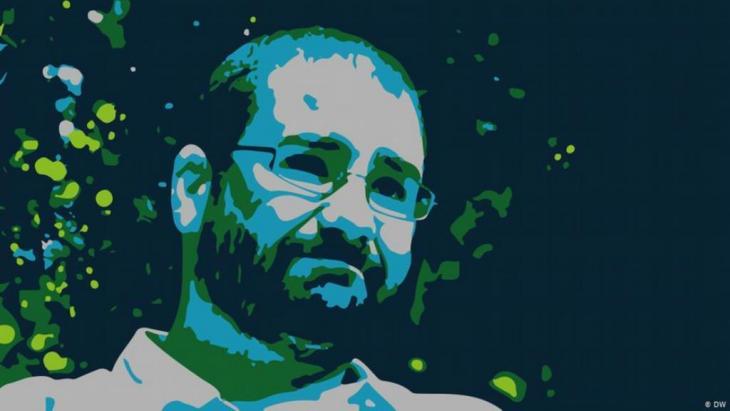 Released in March after serving a five-year sentence for protesting without permission, prominent Egyptian activist Alaa Abdel Fattah was arrested again on 29 September, as part of what government critics say is the largest wave of arrests since President Abdul Fattah al-Sisi took power

All these things have created repressed anger in the streets and within the security establishment, most notably the Army. And this anger is about to erupt. It came with the videos, which the dissident contractor and artist Mohamed Ali published; they revealed the corruption of Sisi, his family and his inner circle, whilst a third of the population lives in poverty.

The demonstrations which took place in Egypt on 20 September, with the demand that Sisi should go, are the biggest and most potent protests since he seized power following a military coup in 2013.

These demonstrations fall outside the traditional structure of Egyptian political movements in the sense that new elements of society have joined in; they also make clear the role of the country at large in fuelling them. The protests also point to the provinces’ predominance over the centre (Cairo as represented by Tahrir Square). This has given them a new form and potency which was not present in the simple protests earlier during Sisi‘s rule, which were met with severe brutality and repression.

Egypt post-20 September is not what it was before

The outbreak of protests sparked a wide debate among commentators and analysts as to whether elements in the regime supported them and whether they were behind the dissident contractor Mohamed Ali.

The question is largely academic now: if parts of the regime are behind the protests, they have successfully advanced them to a critical point, and if they are not, some in the regime may well be tempted to follow events closely and even to get involved.

Egypt changed on 20 September and the political scene reached a point of no return. According to reports, there is a struggle going on between the military and the presidency. At the same time that Sisi was suppressing the protests in the street and arresting over 2000 people in a single week, he was also working hard to uncover those elements that supported the movement against him. This was reflected in a number of decisions which his son Mahmoud al-Sisi, deputy head of the GIS, took to prevent former and current GIS officers from travelling abroad; he even opened an investigation into them under his direct supervision.

The fear that Sisi might take over the army

There are those inside the military who fear that Sisi will take over the whole military establishment. They worry that they might suffer the same fate as former chief of staff and presidential candidate Sami Anan, who is currently in a military prison, or as former prime minister and presidential candidate Ahmed Shafiq, who is under house arrest. Or they might meet the fate of former Defence Minister Sedki Sobhi and Chief of Staff Mahmoud Hijazi, who were removed from office and placed under house arrest, as sources close to the regime have reported.

The fact is that the recent protests have highlighted the weakness and fragility of Sisi’s regime: streets and squares were turned into military barracks on 27 September to prevent similar demonstrations.

The protests also showed that whatever Sisi’s popularity six years ago, it is no more. By contrast, his security and media apparatus tried to get a crowd together in al-Manassa Square by offering them basic foodstuffs like oil, sugar etc.. Despite that, they couldn’t rally more than 20,000 to their cause, even with students from military colleges. In this, they forget that a few thousand people in a minor square do not legitimise a president in a country like Egypt, which has a population of around one hundred million spread across 27 provinces.

The world must not stand silently by as President al-Sisi tramples all over Egyptians’ rights to peaceful protest & freedom of expression. The Egyptian authorities must immediately release all those detained & allow further protests on Friday to go ahead. https://t.co/YjB724V2ND

While Sisi’s security forces were busy drumming up support from some citizens, IS carried out an attack on the army in Sinai which killed 19 soldiers, which rather points to the failure of Sisi’s counterterrorism strategy.

For the first time since 25 January 2011, the provinces of Upper Egypt have come out against the regime and against Sisi, and protesters have been tearing posters down and demanding his resignation.

The protests in Upper Egypt illustrate that Sisi’s alliance with tribal and clan leaders (most of whom are remnants of Mubarak’s state) has come to an end, and he can’t risk holding any local elections without their support.

The recent protests have also revealed that Western support for Sisi is not what it was at the beginning of his reign, as can be seen in the statements made by the U.S. State Department and the European Union affirming the right of Egyptians to demonstrate and demanding that Sisi halt his repressive tactics and release the detainees.

All this is a clear indication of how the Sisi regime is now perceived in the West and in decision-making circles in the U.S. (i.e. other than President Trump who sees Sisi as his “favourite dictator”). The Sisi regime has become a major embarrassment for its supporters, and it is evident that oppression is not a path to stability, as the German Foreign Ministry said in its statement.

The key question remains whether Sisi will be able to continue in this way until 2030, as planned in the amended constitution? Does he have a plan to get there, and does any sane person think he ever will?

What is clear is that major change awaits Egypt in the days and weeks ahead.

"The people aren’t ready for democracy" has been the constitutional basis for Arab tyranny, its favourite slogan and its sacred narrative for more than a century. Yet, asks Khaled ... END_OF_DOCUMENT_TOKEN_TO_BE_REPLACED

A new global database shows a significant gap in reported COVID-related deaths, suggesting the actual worldwide death toll is short by at least 1 million. That's due in part to ... END_OF_DOCUMENT_TOKEN_TO_BE_REPLACED

Two decades after the attacks of 11 September 2001, the West faces the shattered debris of its failure – not only in Afghanistan, but also in Iraq, Syria, Libya and Yemen. What ... END_OF_DOCUMENT_TOKEN_TO_BE_REPLACED

The coronavirus pandemic has turned lives upside down all over the world. In the Middle Ages, however, people lived with epidemics all the time. The best and most famous ... END_OF_DOCUMENT_TOKEN_TO_BE_REPLACED

In Ancient Egypt, the pharaohs had "solar boats" built to take them into the afterlife. One of these boats was discovered in 1954. It has now been moved to the Grand Egyptian ... END_OF_DOCUMENT_TOKEN_TO_BE_REPLACED

Attracting little attention from the world at large, Egypt's military regime has been mercilessly going after dissidents. Now, the first executions of prominent members of the ... END_OF_DOCUMENT_TOKEN_TO_BE_REPLACED
Author:
Taqadum al-Khatib
Date:
Mail:
Send via mail

END_OF_DOCUMENT_TOKEN_TO_BE_REPLACED
Social media
and networks
Subscribe to our
newsletter