The Twilight of the Despots

In his essay, Stefan Weidner points out that Mubarak is not the only one who seems to have lost touch with the reality of the situation in Egypt, so too have Western governments and media 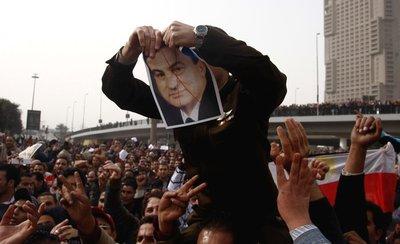 The beginning of the end of the regime? "Mubarak is still officially in power, but that power is disconnected from Ground Control, floating off like Major Tom in outer space. The engine of change is hurtling full steam ahead, but the President's carriage, the one still receiving all the international calls, has been left standing on the tracks," writes Stefan Weidner

​​To Egyptian ears, it must have sounded like mockery when US President Barack Obama, who once seemed to be the bearer of international hope, said on Friday that he had impressed upon Egyptian President Hosni Mubarak his responsibility to deliver reform.

On Sunday morning, 19 private jets carrying the families of businessmen close to the regime left Cairo for the Gulf states. No police have been seen on the streets of the capital for the past three days. No one is curtailing the people's freedom to demonstrate any more; at most it is the demonstrators themselves who are calling for order and turning, when necessary, to the army for help.

The total failure of Western governments and Western media to grasp the reality of the situation in Egypt is surpassed only by the behaviour of the official political caste in Egypt itself. It severed Internet connections and on Sunday shut down Al Jazeera's satellite transmission. In so doing, it irrevocably locked itself into its own version of the Truman Show.

Since this "president" assumed the leadership of the country in 1981, Egypt has been in an exceptional situation, effectively a state of emergency. You don't have to be a political scientist to know that when the exception becomes the rule, it is no longer an exception; and an ongoing emergency eventually ceases to alarm.

What a powerful man that must have been, one respected by all other powerful men around him, to impose a curfew on Friday and then, because the police had vanished into thin air, send out his army to party in the streets. This was to be the most comprehensively flouted curfew in the history of mankind; and the best documented flouting at that, with images broadcast on every channel.

During the night, however, brazen graffitists sprayed a contradictory logo onto the nice new sand-coloured armoured personnel carriers sent out to enforce the curfew. As they rolled past the cameras, the writing was clearly visible for all the world to see: "Down with Mubarak"!

The goal is within reach. Mubarak is still officially in power, but that power is disconnected from Ground Control, floating off like Major Tom in outer space. The engine of change is hurtling full steam ahead, but the President's carriage, the one still receiving all the international calls, has been left standing on the tracks.

The writing is on the wall: anti-regime graffiti on armoured personnel carriers in Cairo

​​The only thing this government can still do to its people is to abandon them to the chaos on the streets and, in so doing, pay them back for their insubordination. Presumably the people who are supposed to be in charge have said to themselves: all right, let's see whether the Egyptian people are as politically mature as they claim to be.

They simply abandoned Egypt's cities to the looters. It began on Friday at the most important museum in Africa and one of the most significant in the world, the National Museum, which is normally protected like a fortress. That is, until news of this sacrilege spread among the demonstrators and civilian vigilante groups were created to protect the museum. Eventually the army took over. A few glass showcases were smashed; some things will have gone missing. For now, however, the worst has been averted.

The regime has, as we all did, underestimated the Egyptians' capacity for self-organisation and discipline. By Saturday evening, civic committees had been established in every district, erecting barricades and checkpoints. Anyone who wants to call on them for help can do so under the new number 19614.

By Sunday night, the window of opportunity for the spontaneous looters or – who can be certain – the organised gangs of robbers had already closed again. However, no firemen have come to put out the blaze in the high-rise building that housed the headquarters of the governing party, which has been burning since Friday. Only the Interior Ministry – the home of Egypt's secret police – is still being defended by snipers from the presidential guard.

By midday on Sunday there had been 102 deaths. Compared with what might have happened, and might indeed still happen, it can be said that this number is not especially high.

After recent events in Tunisia, there was not a single observer who was prepared to say that the same thing could happen in Egypt. Yet anyone with even the slightest knowledge of the country and its people knew that the time was more than ripe, knew what a mess Egypt was in, knew how much the dictator was hated.

Yet they still thought: he's a clever fox, this Mubarak; he didn't even go after a popular writer like Alaa Al Aswany, whose best-selling novel Chicago was the most merciless satire of an incumbent ruler in the whole of contemporary Arabic literature.

Al Aswany was present at the first big rally last Tuesday, in Tahrir Square in the centre of Cairo. He was called upon to address the crowd. He did not want to say very much, but he did say: "It is time we were finally treated like human beings!"

The 74-year-old general Omar Suleiman has been made vice-president. Mubarak's intelligence chief and most senior diplomat, who is regarded highly by the United States and Israel, is being seen as his potential successor.

If he manages to become interim president and to organise a new presidential election under new voting laws – free elections are simply not possible under the existing ones – he will have achieved more than one would have given him credit for. At the latest after such elections, if not in the coming weeks and against his will, he too will be consigned to the past.

It is inevitable that this global political shift will also affect the conflict in the Middle East. Not in the form of a direct threat to Israel, but in a way that will expose the senselessness of current Israeli policy and its unwillingness to compromise.

​​If Egypt is to be governed even partially according to the will of its people, it will open its borders to the Gaza Strip. And if Hamas is no longer isolated, this will occasion a major reshuffling of the cards in the Palestinian-Israeli deck, putting some urgently needed movement back into the completely stagnant "peace process".

For many years the only alternative to the Mubarak regime appeared to be political Islam. Now we see with astonishment the vigour with which civic society has seized the initiative. Only at the very last minute, last Friday, did the Muslim Brotherhood jump onto the revolutionary bandwagon. They are still stuck right at the back of the train, and that is hopefully where they will remain.

The preachers in the mosques, all of whom are appointed and controlled by the Ministry of Religion, have for the time being lived up to their responsibility, announcing on Friday that Allah permits freedom of expression and protest, but forbids chaos and violence.

Here and there comparisons are being made with the Iranian revolution of 1979, but these are inaccurate, not least because there is no sign of an Egyptian Khomeini. The only opposition politician to return from abroad is Mohamed ElBaradei, the former head of the International Atomic Energy Agency and winner of the Nobel Peace Prize.

The lesson of Tunisia, as savage as it is unforgettable, that self-immolation is more effective than suicide attacks, will remain engraved on the Arab collective memory forever.

Protests in Egypt
Egypt's "Day of Rage"
With Mohamed ElBaradei's return to Egypt, demonstrations planned for after Friday prayers and the authorities' restriction of access to the Internet, the situation in Egypt is set to escalate over the weekend. Al-Masry Al-Youm assesses the significance of the protests on 25 January

Protests in the Arab World
Is True Change Really Possible?
The protest movement toppled the government in Tunisia and is currently rattling Hosni Mubarak's regime in Egypt. Will the entire Arab world be gripped by a general uprising of the people, ending in democracy and liberation from authoritarian regimes? According to Ute Schaeffer, it's not as simple as all that

Copts in Egypt
The Dome Dispute
The recent attack on a Coptic church in Alexandria has highlighted increasing sectarian tensions in Egypt and discrimination against Christians in Egyptian public life. Another example is the construction freeze on a building being constructed by the Coptic Church in Cairo's Omraniya district. Amira El Ahl reports

Berlin's annual Human Rights Film Festival closed at the weekend. One entry to the festival was the documentary "Captains of Zaatari". Its Egyptian director Ali El Arabi focuses ... END_OF_DOCUMENT_TOKEN_TO_BE_REPLACED

Two refugees detained in Egypt are facing deportation to Eritrea. The expulsion of the Eritreans, who have been incarcerated in Cairo for more than eight years, has been halted ... END_OF_DOCUMENT_TOKEN_TO_BE_REPLACED

"The people aren’t ready for democracy" has been the constitutional basis for Arab tyranny, its favourite slogan and its sacred narrative for more than a century. Yet, asks Khaled ... END_OF_DOCUMENT_TOKEN_TO_BE_REPLACED

International relations are shifting across the Middle East as regional powers adapt to America's retrenchment and China's growing influence. Although the region could become the ... END_OF_DOCUMENT_TOKEN_TO_BE_REPLACED

Germany's foreign policy is explicitly values-based. But what happens, Ralf Bosen asks, when democracy, the rule of law and human rights collide with the logic of trade and ... END_OF_DOCUMENT_TOKEN_TO_BE_REPLACED

Egyptian author Nadia Wassef talks about opening the first independent bookstore in her home country; and her latest book in which she celebrates books and booksellers. By Manasi ... END_OF_DOCUMENT_TOKEN_TO_BE_REPLACED
Date:
Mail:
Send via mail

END_OF_DOCUMENT_TOKEN_TO_BE_REPLACED
Social media
and networks
Subscribe to our
newsletter