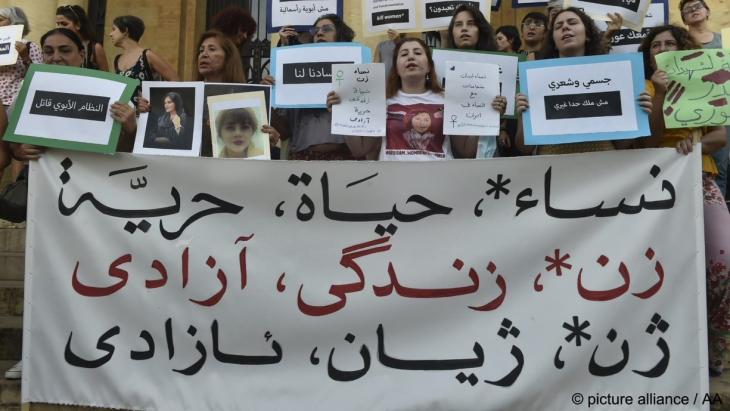 Protests in Iran
Arab women in solidarity with their Iranian sisters

"You are not my guide... I am the compass. Iranian women have spoken, freed themselves, and unleashed a revolution despite smelling death. They have cut their braids in anger; they have raised the banner of hair set free during an age of servile beards. They are our guides... and more"

Posting these words on Instagram, the Arab feminist organisation Fe-Male proclaimed its solidarity with the women-led Iranian protests for freedom from compulsory veiling, which it titled, "From us to you, (sending) all our love and support", in both Arabic and Persian.

The organisation was one of the first Arab institutions to show solidarity with the surge of unrest led by Iranian women following the death of a young woman named Mahsa Amini, 22, at the hands of the Iranian 'morality police'. In its statement, the organisation asserted that "Mahsa Amini did not die, her body just went to rest... And here is her spirit inspiring women in Iran and all patriarchal countries to regain authority over their bodies".

On social media, there has been a wave of Arab solidarity with the ongoing women's uprising, with hundreds of thousands of photos, artworks and videos of women cutting their hair under the hashtag "#MahsaAmini", which crossed the 200 million mark on Twitter, breaking the hashtag's historic record since it was launched on social media platforms.

Under the hashtag launched by the Iranians, many social media platform users also expressed their rejection of the decisions of patriarchal countries across the world – including Iran – against women's freedoms and rights.

In Tunisia, human rights and feminist associations organised a rally in support of Iranian women in front of the Iranian Cultural Centre in the capital Tunis, during which they condemned the oppression and persecution of women in Iran. Female protesters called out and chanted, "Tunisian women support Iranian women", "Here to voice our solidarity with Iranian women", and "Revolution and freedom".

During the movement, the Iranian ambassador tried to request a meeting with the president of the Tunisian Association of the Democratic Women (ATFD), Neila Zoghlami, but she refused and remained in the rally, cutting a strand of her hair in solidarity with Iranian women.

For her part, artist and human rights activist Nawal Bin Saleh, who was present at the women's gathering, said, "It is true the number present at the protest movement was not large, but the message was strong and it discredited the Iranian ambassador to Tunisia. In a provocative move and an attempt to contain the gathering, the Iranian embassy staff sent us sweets, but we refused to take them."

The 'Women Against the Referendum' initiative, which includes Tunisian female human rights defenders, lawyers, and civil society activists, also expressed its absolute support for Iranian women in the face of the harassment and arrests they have been subjected to since the protests began over the death of Mahsa Amini.

Tunisian singer Emel Mathlouthi wore the hijab and spoke in Persian in solidarity with Iranian women. She also performed a song to the tunes of the famous Iranian song "Sultan Qalbha", and declared it a greeting from Tunisian youth to the youth of Iran.

While raising pictures of Mahsa Amini and calling against oppression, a number of women held a rally in front of Beirut's National Museum in solidarity with the protesting women of Iran. Lebanese women held banners that said: "Our anger is one, our struggle is one", "Women's hair is not sinful, your oppression is sinful", "The veil is a personal freedom, not a governmental matter", and "My body and my hair belong to no-one but me."

The Kurds of Syria and Iraq

In Kurdish-controlled northern Syria, dozens of women demonstrated over the killing of Mahsa, an Iranian Kurd who was also known as Jina, with some of the female protesters cutting their hair and burning the hijab. Arwa al-Saleh, a member of the Kongra Star (Kurdish for Star Congress) women's rights organisation in the Kurdish regions of Syria, which called for this women's rally, said: "We support and stand with the protests and uprisings in Iran." 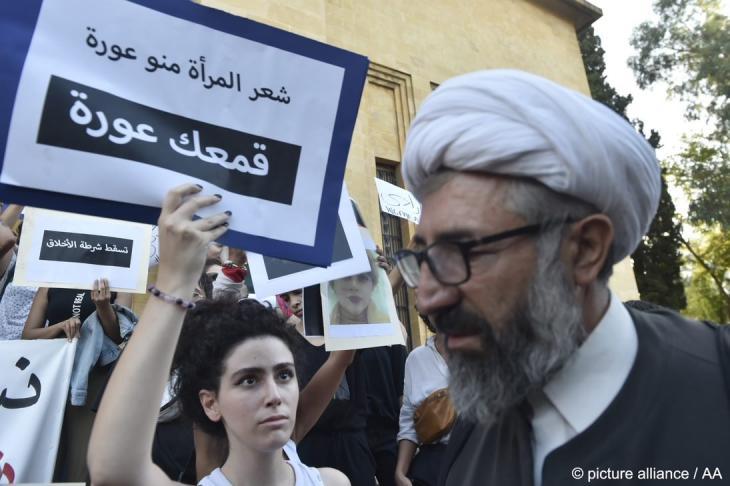 The women of Iran have succeeded in turning their rejection of compulsory veiling into a rejection of tyranny: "The bravery of protesters in Iran is indisputable, and many have paid a high price for it – but the media’s focus on the hijab, rather than on the women’s bold resistance to an oppressive regime and their ongoing struggle for their right to bodily autonomy, is simplistic and counterproductive"

In front of the United Nations office in Erbil, Iraq, demonstrators protested against Iran’s policy of repressing women. They also burned the flag of the Islamic Republic and raised the slogan: "Jina is a role model and the spark of the uprising". Protester Joanna Tamsi said, "We are demonstrating in front of the United Nations headquarters, protesting against the killing of Mahsa Amini, against the killing of women, and against the Iranian regime."

Speaking on the wave of solidarity with Iranian women that was launched by the women of the Arab world, journalist Rasha Hilwi, co-editor-in-chief of Raseef22, said, "Arab women feel a great sense of basic commonality with the ongoing struggle in Iran, which is centred around the demand to regain full ownership over their bodies." A Palestinian herself, Rasha Hilwi commented on the contradiction over the Iranian authorities declaring their support for the freedom of Palestinians while repressing their citizens, saying, "a regime that oppresses its own people cannot be part of my path towards freedom".

Female journalists, activists, and artists in the Arab world shared their views on the strict restrictions on women's freedoms taking place in Iran. Lebanese journalist Sawsan Mhanna, in her article entitled "All the Women of the World... The Revolution is with Braids, Henna, and the Zalghouta (traditional Arab practice of ululating, otherwise known as zaghrouta)", addressed the history of the struggle of women across the world, especially the Arab world, to obtain their rights, in light of the demonstrations in Iran. Sawsan wrote, "That girl who died because her braids were visible has turned into a new symbol that gave her life in defence of the freedom of Iranian women and exposed the inhumane conditions they are suffering from in a society that still lives in the darkness of the Middle Ages and finds women's hair sinful".

Nora Jaber, a lecturer in law at the University of Exeter in the UK, said in an article on the Western media's handling of Iran's protests: "The latest protests must be contextualised within the broader struggle for women’s and minorities’ rights in Iran, and within a wider history of grassroots resistance to the regime’s oppressive policies."

The academic went on to affirm, "The bravery of protesters in Iran is indisputable, and many have paid a high price for it – but the media’s focus on the hijab, rather than on the women’s bold resistance to an oppressive regime and their ongoing struggle for their right to bodily autonomy, is simplistic and counterproductive."

In Doha, Arabs from Morocco, Tunisia, Egypt and Algeria are gathering to celebrate the first ever FIFA World Cup to be held on Arab soil. The criticism from Europe? Over the top, ... END_OF_DOCUMENT_TOKEN_TO_BE_REPLACED

November 2022 sees the Arab world firmly in the spotlight with the COP27 in Egypt and the FIFA World Cup in Qatar. Public trust in MENA governments is weak, thanks to their ... END_OF_DOCUMENT_TOKEN_TO_BE_REPLACED

Palme d’Or winner "Boy from Heaven" is a classic crossover film in which cultural elements are mixed together in haphazard and random fashion. Shady Lewis Botros bemoans the ... END_OF_DOCUMENT_TOKEN_TO_BE_REPLACED

COP27 in Sharm el-Sheikh is turning into a PR disaster for Egypt’s military regime. Instead of praise for the host, the news is full of solidarity for imprisoned activist Alaa ... END_OF_DOCUMENT_TOKEN_TO_BE_REPLACED

END_OF_DOCUMENT_TOKEN_TO_BE_REPLACED
Social media
and networks
Subscribe to our
newsletter