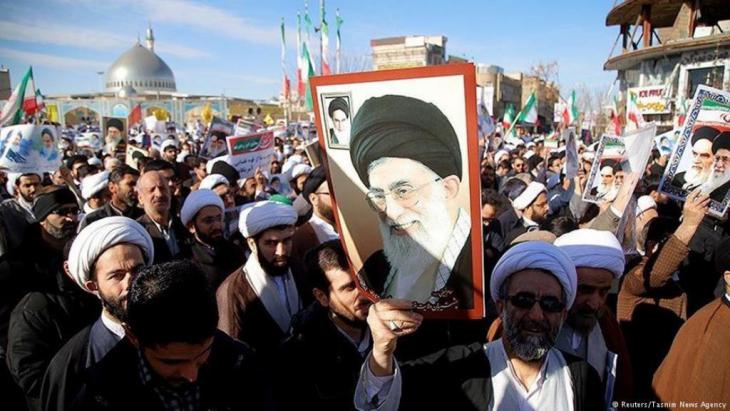 Protests in Iran
No revolution in sight

Forty years after the start of the Islamic Revolution, Iran is once again convulsed with protests. Many of the economic problems facing the country today resemble those in the 1970s, and the regime appears to be scarcely less repressive and ossified than it was back then. Nevertheless, the current protests are unlikely to be the beginning of a new revolution, says Ulrich von Schwerin

While Iran is still busy debating how to interpret the protests of the past few weeks, the fortieth anniversary of the Islamic Revolution is upon us. On 8 January 1978, thousands of students took to the streets of Qom, Iran's theological centre, to protest against an article that sharply attacked Ayatollah Ruhollah Khomeini.

Khomeini, who had been living in exile in Najaf, Iraq, since giving a fervid speech against Shah Mohammed Reza Pahlavi in 1963, was regarded even by many secular Iranians as the symbolic figurehead of the opposition.

In the article in question, which was published in the state-run newspaper Etelaat, the author not only cast doubt on Khomeini's Iranian origins but also vilified him as a British agent.

The clerics in Qom were so incensed at this attack on a leading figure from among their ranks that they cancelled lectures at the universities in protest. When students of religion flooded into the streets to demonstrate, the military opened fire and at least nine people were killed.

Instead of nipping the revolt in the bud, the military crackdown set off a chain of further protests to honour those killed, which were in turn suppressed with more bloodshed. 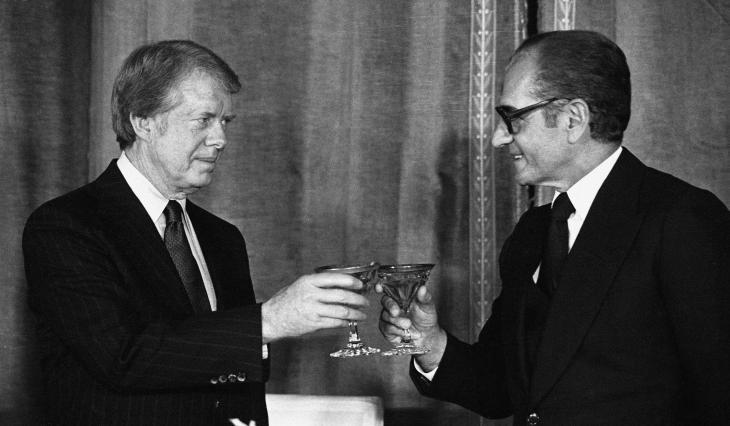 Island of stability rocked to the core

When the Shah fled the country one year after the start of the uprising, the outside world was incredulous that things could come to such a pass in a country that President Jimmy Carter had called an "island of stability" as recently as New Year 1978.

Now, shortly before the New Year 2018, thousands of Iranians took to the streets in anger against the regime, causing many to wonder whether this could be the start of a new revolution. Hardly anyone saw the protests coming, which quickly spread from Mashhad to the rest of the country.

That being said, it did not come as a huge surprise that long-simmering resentment against government mismanagement, unemployment and the rising cost of living ignited violent unrest.

In 1978 too, there was widespread dissatisfaction with social and economic developments in the country. In the 1960s, the Shah had set his nation on a course of state-guided modernisation and industrialisation. Against the opposition of the clergy, he had pushed through the so-called "White Revolution", which included land reform, the privatisation of parts of industry, a literacy campaign and voting rights for women.

When the spike in oil prices in the early 1970s brought Iran an unexpected windfall, the government launched a number of large industrial and infrastructure projects. New factories were built with the help of Western experts, cities grew, the economy boomed, and the level of education and standard of living of large sections of the population rose. But in 1975, growth ground to an abrupt halt, leading to exploding inflation and rising unemployment. 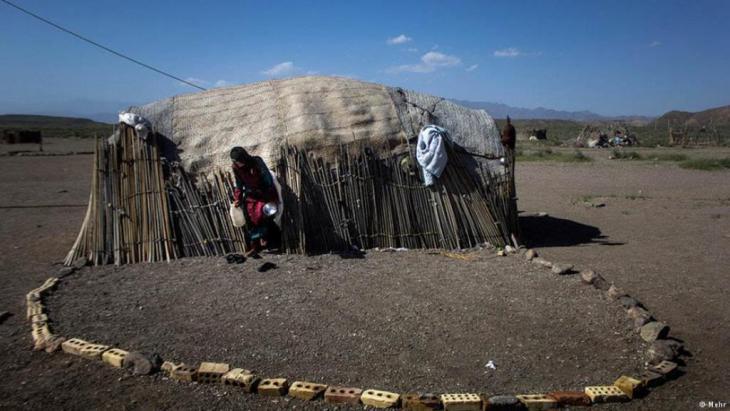 "The revolts reveal not only the failure of the regime to lastingly improve the lives of the 'disenfranchised', but show above all that after 40 years of the Islamic Republic, its core clientele has considerable doubts as to whether their government really represents their interests," writes Ulrich von Schwerin

It became evident that the country's development had been highly uneven. While the elites amassed wealth, large parts of the rural population and working class had hardly benefited at all. In particular the poor residents of the suburbs, who had been driven into the cities by the land reforms, suffered under the rising cost of living. Their rage was directed at the upper class, whose Western lifestyle appeared all the more repulsive to them because it was so out of reach.

The reforms had raised hopes among the middle class that were difficult to meet. Since the 1960s, the Shah had expanded the universities and sent young people to study in Europe. But after graduating, many had trouble finding a job in the faltering economy. After becoming politicised at university, they pushed for political reforms. The Shah, however, only tightened the reins even more.

Beginning in the 1960s, Iran's opposition had been forced underground, the press had been turned into a government mouthpiece, and all criticism was suppressed. The aging and cancer-stricken monarch seemed increasingly disconnected from reality. In 1975, the Shah made the Rastakhiz Party (Resurgence Party) the only legal political party in the country. He also replaced the Islamic calendar with one that began with the founding of the Persian monarchy, so that Iranians suddenly found themselves in the year 2535. 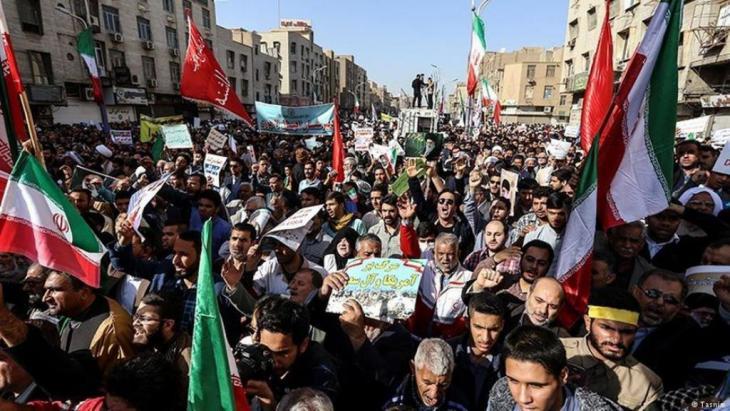 Fighting back: in an attempt to show that the country's leaders still have the backing of the people, mass demonstrations were organised after Friday prayers last week. The government had already called for similar demonstrations across the country. Hundreds of thousands took to the streets to show their support for the Supreme Leader and the Islamic Republic

Uneven development, the rising cost of living, high unemployment and many unfulfilled expectations – many of these issues can be found in today's Iran. Now as then, the Iranian government today relies on deregulation, privatisation and foreign investment, while simultaneously cutting assistance for the poor.

Now as then, many well-educated young people find themselves without work, while the children of the elite openly flaunt their affluence.

Now as then, a large portion of government revenues flows into obscure foundations that are beyond government control: back then, it was the case for the Pahlavi Foundation; today, it is religious endowments under the control of the Supreme Leader.

Now as then, the leadership is investing enormous sums in the military: back then, to defend the country against Saddam Hussein; today, to fight Saudi Arabia and to support pro-Iranian militias in Lebanon, Syria, Iraq and Yemen.

Now as then, the people complain of a corrupt, inefficient administration in which the elites distribute all the posts and benefices amongst themselves. An effective opposition that could insist on reforms is utterly lacking, as are labour unions that could enforce wage demands.

Now as then, many of the problems facing the country are ignored by the state-controlled media, while protests are rarely allowed and critics are persecuted by the powerful intelligence service.

So are we once again witnessing a pre-revolutionary mood in Iran? Were the protests the harbinger of a larger uprising? Today, as in the 1970s, the Iranians are governed by an aging ruler who in his palace in Tehran seems increasingly out of touch with the concerns of the people. As usual, Supreme Leader Ayatollah Ali Khamenei has blamed foreign "enemies" for the protests, but many Iranians are no longer convinced by this story. 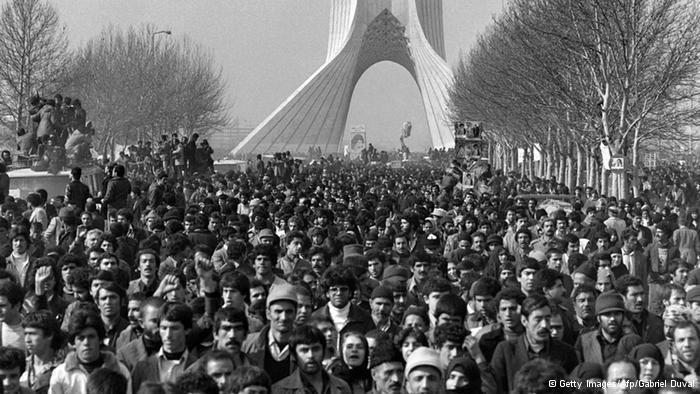 On 1 February 1979, around four million Iranians took to the streets to catch a glimpse of Khomeini's motorcade as it headed to Tehran Central Cemetery, where he held his arrival speech. The leader of the revolution clearly had the support of the majority. According to Ulrich von Schwerin, the recent protests in Iran are unlikely to result in another revolution: "The many days of rallies organised by supporters of the regime have furthermore left little doubt that the current system – unlike the Shah in 1978 – still has widespread support."

Support for the regime still high

The protests by angry young men in the cities and towns of the provinces indicate an alienation of the very class that the regime always purports to represent. The revolts reveal not only the failure of the regime to lastingly improve the lives of the "disenfranchised" but show above all that after 40 years of the Islamic Republic, its core clientele has considerable doubts as to whether their government really represents their interests.

But is a new revolution really in the offing, as the Trumps and Netanyahus of the world seem to believe? When thousands of young men risk their lives and their freedom on the streets, it must be a wake-up call for the leadership in Tehran, but it is not the start of a new revolution. Unlike in 1978, the demonstrators are lacking any organisation or leadership; they have no clear objectives and no backing in the clergy or the established parties.

The conservatives may use the protests to compel President Hassan Rouhani to renounce unpopular reforms, and the reformers may appeal to him to respond to the "legitimate demands" of the protesters. But neither side has any interest in a destabilisation of the system. And even though the People's Mujahedin might be dreaming in their Parisian exile that their time has finally come, they are lacking any grassroots support in Iran.

The many days of rallies organised by supporters of the regime have furthermore left little doubt that the current system – unlike the Shah in 1978 – still has widespread support.

The fact is that, not only do millions of Iranians have a tangible material interest in the preservation of the system – many also still identify with it, despite all the discontent about corruption, nepotism and mismanagement.

And last but not least, the popular uprisings in Egypt, Syria and Yemen as well as their own experiences have left them with considerable doubt as to whether a revolution is really the solution to all the present problems.

Home
Print
Newsletter
More on this topic
Protests in Iran: The spark that turned into a wildfireProtests in Iran: An own-goal for the hardlinersPhoto gallery: Frustration boils over in Iran
Related Topics
Ayatollah Ali Khamenei, Ayatollah Ruhollah Khomeini, History of the Near and Middle East, Iranian clerics, Iranian opposition, Islamic Revolution of Iran, Social movements
All Topics

Drought and upstream water diversions have seen the Zayandeh Rood, "fertile river" in Persian, run dry since 2000, with only rare exceptions. The famed river bridges of the ... END_OF_DOCUMENT_TOKEN_TO_BE_REPLACED

Since the government cut subsidies for food, prices in Iran have skyrocketed. Protests that broke out in Khuzestan province are now spreading across the Islamic Republic. By ... END_OF_DOCUMENT_TOKEN_TO_BE_REPLACED

Very different Western reactions to the suffering in Ukraine and the Arab world show that there is a profound rift among cultures. Essay by Michael Young END_OF_DOCUMENT_TOKEN_TO_BE_REPLACED

United Arab Emirates strongman Sheikh Mohammed bin Zayed al-Nahyan, who was formally elected president on 14 May, has led a realignment of the Middle East, creating a new anti- ... END_OF_DOCUMENT_TOKEN_TO_BE_REPLACED

More than 800 Iranian filmmakers have signed a declaration against sexual harassment, coercion and violence in their industry. The public's response to their willingness to name ... END_OF_DOCUMENT_TOKEN_TO_BE_REPLACED
Author:
Ulrich von Schwerin
Date:
Mail:
Send via mail

END_OF_DOCUMENT_TOKEN_TO_BE_REPLACED
Social media
and networks
Subscribe to our
newsletter