The "moderates" versus the people

The fact that the more moderate part of the Islamic republic's elite, the reformists, who have lent their support to the centrist president, has equally been the target of the protesters' rage is hardly surprising. After experiencing massive corruption under the Ahmadinejad administration, Iranians soon had to learn about cases of corruption in the entourage of President Rouhani, the man who had taken up the cause of fighting corruption.

During the summer, Iranians became enraged about the elite's nepotism, mainly in the reformist camp. The outcry was provoked by a 20 July interview in which the son of the leading reformist politician Mohammad-Reza Aref credited his "good genes" for his professional success. On social media, Iranians identified more cases of such "Aqazadeh", whose lucrative jobs were due to their father's position in the system. On the one hand, this further undermined the tarnished reputation of the reformists, making clear that they were clearly part of the ruling elite and not on the side of the people they pretended to represent. On the other, the wall erected after the revolution between regime insiders (khodi), who enjoyed access to state resources and privileges, and outsiders (qeyr-e khodi), seemed to be insurmountable for most Iranians.

All these developments over the past weeks and months came on the back of increased social frustration – certainly an important factor in any uprising – during the past five years of the Rouhani presidency as economic expectations remained unfulfilled. It is true that under Rouhani, Iran has seen its GDP grow again, at around five per cent. Yet economic growth as such is not a reliable indicator of socio-economic development. Crucially, this growth has not been inclusive, that is, its dividends have not been distributed equally. Rather than benefiting larger sections of the population, the elite has merely enriched itself. For instance, the partial revitalisation of trade and investment with the outside world has almost exclusively benefitted the IRGC's and the Supreme Leader's economic empires. Given the Islamic Republic's political-economic structures, where the private sector only plays a marginal role, this lopsided outcome hardly came as a surprise, but is still discomforting. Finally, under Rouhani, poverty and income inequality, especially in smaller cities, have risen. 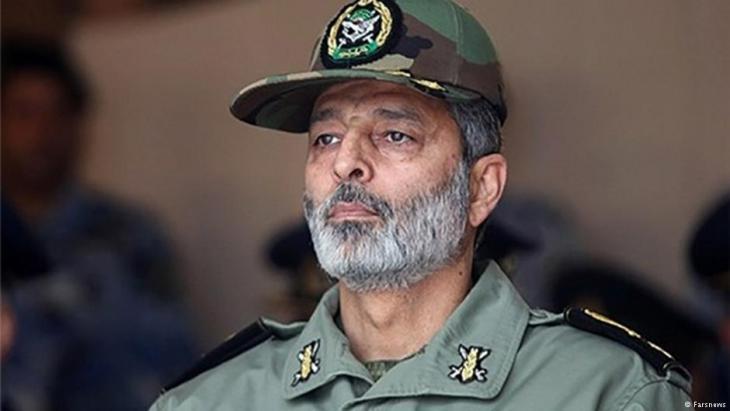 Warning of a crackdown to come? Iran's state media quotes the country's army chief, Major General Abdolrahim Mousavi (pictured here), as saying "Although this blind sedition was so small that a portion of the police force was able to nip it in the bud... you can rest assured that your comrades in the Islamic Republic's army would be ready to confront the dupes of the Great Satan"

In other words, in contrast to Rouhani's promises, barely anything trickled down to the general population. Given the administration's neoliberal leanings, its economic policies relied heavily on austerity. The latter, together with security, formed the two constant pillars of Rouhani's budget allocations. This neoliberal-authoritarian mix has neither alleviated the socio-economic misery of Iranians nor weakened authoritarian structures.

Structurally, the ongoing social misery, as well as the political system's autocratic and repressive nature, have long formed the dual and intertwined core of a regime that had monopolised economic and political power in its own hands. Today, almost half of the Iranian population hovers around the poverty line, which tellingly stands above the official minimum wage. Officially, one in eight people and one in four young people is unemployed. In reality, the figures are likely to be much higher. It was precisely this impoverished youth in their 20s who were the drivers of the uprising. According to estimates, 40 per cent of young people are unemployed.

All this is only a preliminary account of factors I deem important to consider. As with all such almost on-the-spot analyses of on-going social phenomena, the insights presented here can only be tentative and non-exhaustive. Yet what I present here for debate is that the dual evil of Rouhani's neoliberal economic policies and the Islamic republic's authoritarianism has created this new level of discontent that is fuelling the uprising. Because of that nefarious combination, I would argue, such an eruption was merely a matter of time.

Almost precisely seven years after the start of the Arab Spring, people from similar social backgrounds and with similar socio-economic and political demands boldly took to the streets, shaking the very foundations of yet another autocracy in the Middle East. Importantly, their hopes have been belied time and again by both sections of Iran's establishment, conservative and reformist, as reflected in many protest slogans. A much-needed third way can only materialise when those factions permit the emergence of a political alternative that Iranians have been deprived of since the inception of the Islamic republic with its exclusively Islamist political establishment.

The wave of protests might have waned a week after it started due to repression and the lack of support of the reform-oriented section of the middle class. Yet the ongoing rage, predicated upon by the same unaltered conditions that generated it in the first place, continues to fuel protests, posing a veritable threat to the entire elite.

Ali Fathollah-Nejad is Iran expert with the German Council on Foreign Relations (DGAP) and teaches at Harvard Kennedy School′s Belfer Center for Science and International Affairs.

Sufis today are under attack from fundamentalists and modernists alike. At the same time, a new form of Sufism is emerging in the West. By Marian Brehmer END_OF_DOCUMENT_TOKEN_TO_BE_REPLACED

World-famous Iranian film director Jafar Panahi has been incarcerated for several months, even though Iran's Supreme Court overturned the verdict against him. Now, he has gone on ... END_OF_DOCUMENT_TOKEN_TO_BE_REPLACED

Short movies nominated for an Oscar often don't get wide public attention. But when one is about an Iranian girl seeking freedom from male domination by taking off her veil, ... END_OF_DOCUMENT_TOKEN_TO_BE_REPLACED

Young women are driving forward the protests against the Iranian regime, which have been going on for months. Literature provides clues as to why that should be, and why the ... END_OF_DOCUMENT_TOKEN_TO_BE_REPLACED

Visiting the country of her parents, murdered by the Iranian regime in 1998, German-Iranian artist Parastou Forouhar finds a changed society: hopeful, strong and courageous, ... END_OF_DOCUMENT_TOKEN_TO_BE_REPLACED

END_OF_DOCUMENT_TOKEN_TO_BE_REPLACED
Social media
and networks
Subscribe to our
newsletter