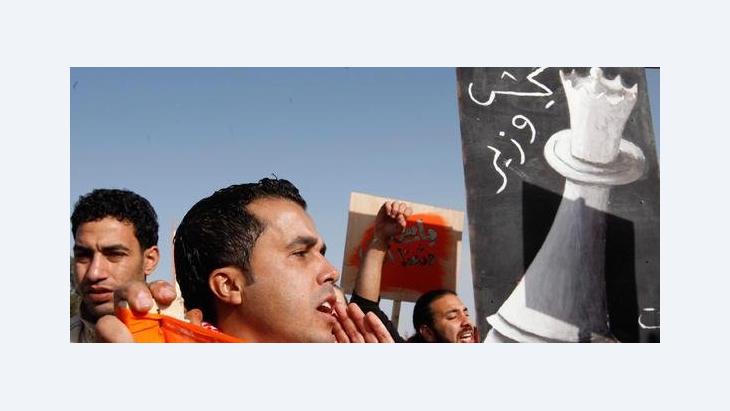 ﻿At first glance, the political situation in Jordan would appear to be stable. Beneath the surface, however, the unrest in the Hashemite kingdom is growing. Although King Abdullah has reacted to the pressure from the streets by appointing a new prime minister, the country is still waiting for real reforms. By Claudia Mende

In the Jordanian capital, Amman, about 4,000 people demonstrate every Friday in the narrow streets around the Husseiny Mosque in the city centre. Week-in, week-out they call for root-and-branch reform of the system, more civil rights, and an end to the rampant corruption.

Unlike in neighbouring Syria, such demonstrations generally go off peacefully in Jordan. In July, however, some people (including journalists reporting on the protest) were injured in clashes with the police. Although the police and the secret service have been exercising restraint ever since, they have been taking careful note of the identity of the demonstrators.

The protests in the capital are dominated by the Jordanian Muslim Brotherhood, which wants a constitutional monarchy. The urban group "Young people of the 24 March", which is dominated by Transjordanians (i.e. by Jordanians from old-established clan families as opposed to Palestinian-Jordanians), is also new. Protests keep breaking out outside Amman too, especially in Kerak, Ma'an, and Tafilah in the south of the country.

After almost a year of the Arab spring, the Jordanian monarchy looks stable. King Abdullah reacted to calls for more citizen participation with a controlled reform of the constitution. However, although some passages of the constitution were changed in August 2011, restricting for example the jurisdiction of the security court, the reform has not actually been implemented yet. 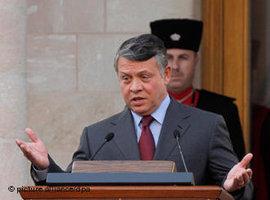 Because of his vague promises, reforms that are pledged but not implemented, and rampant economic and political corruption, the pressure on King Abdullah II of Jordan is growing

​​The monarch also made a vague promise that the prime minister would be directed by the people sometime in the future instead of being appointed by him, which is currently the case. Overall, however, these reforms are largely cosmetic. This explains why there is a strong feeling of dissatisfaction beneath the surface in Jordan and it is unlikely that people will be satisfied with minimal concessions in the long run.

Even though the Jordanians are proud of the fact that demonstrators in their country are not being shot dead by the police as they are in Syria, the fact is that Jordan is struggling with the same problems as its neighbours Syria and Egypt. Jordan does not have any oil reserves, suffers from a widespread and acute shortage of water, and relies heavily on foreign aid, above all from the USA and Saudi Arabia.

Since the start of the Arab Spring, tourism has collapsed by up to 60 per cent. The rate of unemployment is at 30 per cent; many young people are well educated, yet have absolutely no hope of getting a job. At the same time, rent and the price of petrol have rocketed. Corruption is widespread and is openly considered a major problem by Jordanians.

The parliament can no longer seriously fulfil it role as a monitoring and legislative organ; it serves more to balance out different interests in a system of patronage than to actually make democratic decisions. The members of parliament themselves actually do not even have interest in extending their rights. 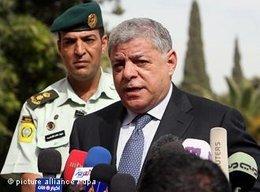 The new Jordanian prime minister, Awn Khasawneh, has pledged that Jordan will never again experience an election "tarnished by manipulation" as it did in November 2010

​​Just recently, King Abdullah replaced his prime minister for the second time this year. The new prime minister, 61-year-old Awn Khasawneh, enjoys a good reputation at international level. His appointment is, therefore, a signal to both the protest movement and Jordan's donors in the West.

A jurist, Khasawneh was a judge at the International Court of Justice in The Hague from 2000 onwards and has not thus far been linked with corruption. Khasawneh has announced that the kingdom will never again experience an election "tarnished by manipulation" as it did in November 2010.

To date, unpopular heads of government were the target of the people's resentment, deflecting attention away from the monarch himself. For a long time, criticism of the royal family in Jordan was taboo. Now, however, this taboo is beginning to crumble, revealing again and again the deep divisions between the "original" Jordanians and the Palestinian-Jordanians, who make up 60 per cent of the population.

The traditional Jordanian clans are the main power base of the Hashemite monarchy. They also dominate the country's administration and security forces. The Palestinians, on the other hand, shape the free economy and are often better educated. They benefit from the economic boom in Amman and Aqaba, which is certainly not the case for the traditional clans in rural areas.

"The protests are primarily Transjordanian in nature," says André Bank of the Institute of Middle East Studies at the German Institute of Global and Area Studies in Hamburg. "This is much more problematic for the regime than earlier protests that were mostly launched by Palestinian-influenced groups." 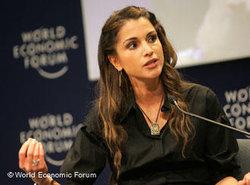 The focus of criticism: Jordan's Queen Rania is accused of having squandered public money on lavish birthday celebrations

​​In February, representatives of Jordanian clans sent a strongly-worded letter to the king, something that has never happened before in the kingdom. "Even more than stability and sufficient food, the Jordanian people want freedom, dignity, democracy, justice, human rights and an end to corruption," wrote 36 representatives of leading Transjordanian families.

They also openly criticised Queen Rania, who hails from a Palestinian family, for wasting public money on the excessive celebrations that marked her 40th birthday. Such criticism would have been unthinkable just a few years ago.

The Jordanian media are also gaining in confidence. Media such as the independent daily newspaper Al Ghad are reporting about cases of corruption. English-language and Arabic media are reporting openly about the people's protests against major projects such as the planned nuclear power plant in Mafraq, to the north of Amman, even though the king has decided in favour of nuclear power.

Critical blogs like www.black-iris.com, which is run by the young journalist Naseem Tarawneh from Amman, openly address the fact that since the start of the Arab Spring, people no longer consider red lines to be uncrossable. What is interesting in this respect is that Tarawneh comes from an influential Transjordanian family in Kerak.

"Two years ago, this would not have been possible," says André Bank. "Although the fear of repression has not completely dissipated, not as many people are as intimidated by it as they used to be."

Most Jordanians still want to reform the monarchy instead of abolishing it altogether. However, their dissatisfaction is growing and they want to see results.

The murder of a female student at Mansoura University in the Nile Delta has sparked a long overdue debate on femicide in Egypt. Karim El-Gawhary reports from Cairo END_OF_DOCUMENT_TOKEN_TO_BE_REPLACED

When times are tough, the exchange of ideas and perspectives becomes especially important. It takes dialogue. And at Deutsche Welle, we need distributors and cooperative partners ... END_OF_DOCUMENT_TOKEN_TO_BE_REPLACED

Women in the Levant have long used needlework to depict the region’s history, its landscapes, customs and traditions. Intricately embroidered panels, varying in style, colour and ... END_OF_DOCUMENT_TOKEN_TO_BE_REPLACED

A straightforward message emerged from last week’s meeting in the Negev desert of the foreign ministers of four Arab countries, Israel and the United States: Israel is key to the ... END_OF_DOCUMENT_TOKEN_TO_BE_REPLACED

Israelis, Arabs and Iranians are landing back in their home countries to the tearful relief of relatives, as evacuations of nationals caught up in the Russian invasion of Ukraine ... END_OF_DOCUMENT_TOKEN_TO_BE_REPLACED

A number of Arab League member states have announced in recent weeks that they intend resuming relations with the Syrian regime. A potential invitation to the Arab League summit ... END_OF_DOCUMENT_TOKEN_TO_BE_REPLACED
Author:
Claudia Mende
Date:
Mail:
Send via mail

END_OF_DOCUMENT_TOKEN_TO_BE_REPLACED
Social media
and networks
Subscribe to our
newsletter