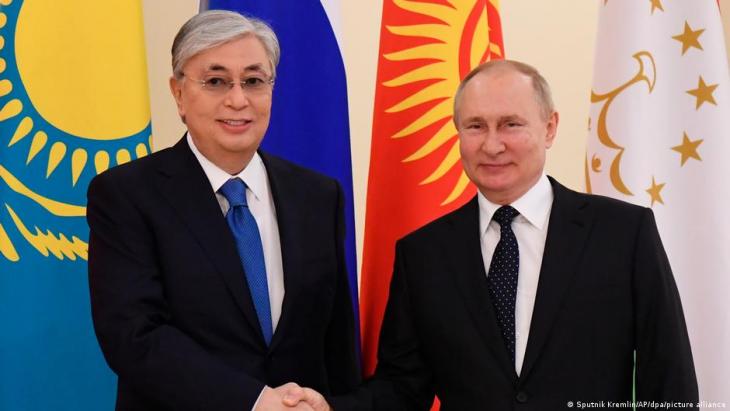 Russia is seeking to shore up the government of Kazakhstan and is sending in the military. For President Putin, there is more at stake than simply his influence in a partner country that is currently being rocked by unrest. By Roman Goncharenko, Emily Sherwin and Olga Sosnytska

How important is Kazakhstan to Russia? One figure makes it clear: the two former Soviet republics share a border that is around 7600 kilometres long. It is one of the longest national borders in the world. But it is not only the length that matters. The neighbouring regions have been militarily important since Soviet times. Examples are the Kapustin Jar missile test site, part of which lies in Kazakhstan, or the many weapons factories on and behind the Urals. Geopolitically, Russia regards Kazakhstan – and the entire region – as its backyard.

When Moscow sent paratroopers to Kazakhstan on Thursday this week to help the government there put down protests, it was also a matter of self-interest. Admittedly, the deployment is embedded in a so-called "peacekeeping mission" of the Collective Security Treaty Organisation, a military alliance of former Soviet republics dominated by Russia.

However, the unrest in Kazakhstan is a "serious threat" to Russia itself, said Russian political expert Nikolay Petrov in interview. Owing to its length, the Russian-Kazakh border is "not particularly well protected".

It is hard to overestimate the importance of Kazakhstan for Russia. It is the largest and richest former Soviet republic in Central Asia, while also being the one with the closest ties to Moscow. Together with Russia and Belarus, Kazakhstan drove the creation of the EU-style Eurasian Economic Union, one of Russian President Vladimir Putin's prestige projects. According to official figures, Kazakhs were the largest group among foreign students at Russian universities in 2020, numbering more than 60,000. In surveys conducted by the renowned Moscow polling institute Levada Centre, around a third of Russians repeatedly rate Kazakhstan as the second most friendly country after Belarus. In 2014, it was overtaken by China and has since ranked third. 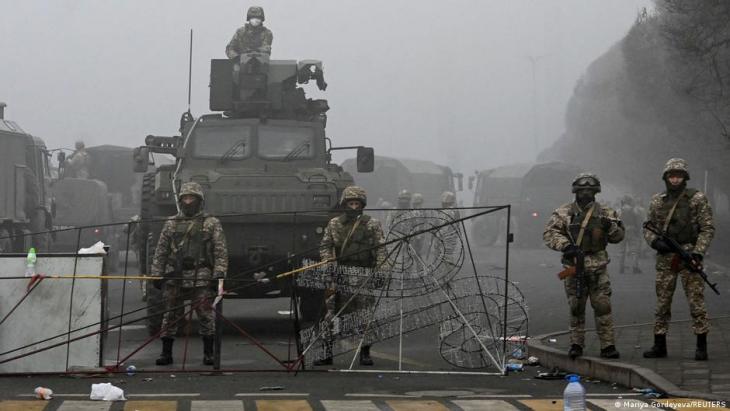 Since the New Year, protests in Kazakhstan against the authoritarian regime of President Tokayev have been intensifying. They were initially triggered by an increase in gas prices and then quickly escalated. On 6 January, Moscow sent paratroopers to Kazakhstan to help the government quell the protests. "All of Russia's major neighbours have been shaken by social unrest," said Russia expert Hans-Henning Schroeder. "Were I sitting in the Kremlin, I would already be wondering whether Russia is next on the list"

In December, Russian Prime Minister Mikhail Mishustin reported record trade revenues at a meeting with his then Kazakh counterpart Askar Mamin. From Moscow's point of view, the most strategically important cooperation relates to space. Kazakhstan inherited the Baikonur spaceport from the Soviet Union, which Russia leases for 115 million U.S. dollars a year. Moscow has since commissioned its own spaceport in the Far East, but wants to continue using Baikonur.

Several Russian oil companies are active in resource-rich Kazakhstan – as are U.S. companies. Russia is also involved in uranium mining in Kazakhstan and hopes to build its first nuclear power plant there soon. Demand for electricity in Kazakhstan rose sharply recently, and the country asked Russia for aid supplies.

However, an expert from the Russian Council on Foreign Policy (RSMD), a Moscow think tank close to the government, stated in an analysis that Russia is "not an attractive model" for Kazakhstan's social and economic development. The political leadership and society of the Central Asian country has "other models", from Europe to Turkey to Singapore.

Unlike Belarus, Kazakhstan is not dependent on Russian loans and has tried to maintain a certain distance from Moscow despite the close relationship. Russia was critical of the decision to change the Kazakh alphabet from Cyrillic to Latin letters.

Around 3.5 million ethnic Russians live in the northern provinces of Kazakhstan, out of a total population of around 19 million. In both countries, there has been speculation for years about whether Russia could annex these territories in a similar way to the Ukrainian peninsula of Crimea. President Kassym-Jomart Tokayev denied such fears in interview in 2019. He said his country's relationship with Russia was "absolutely trusting and neighbourly".

Scores of people have been killed and injured in the unrest. Now, embattled President Kassym-Jomart Tokayev has asked a Russian-led military alliance for help. By Philip Boell 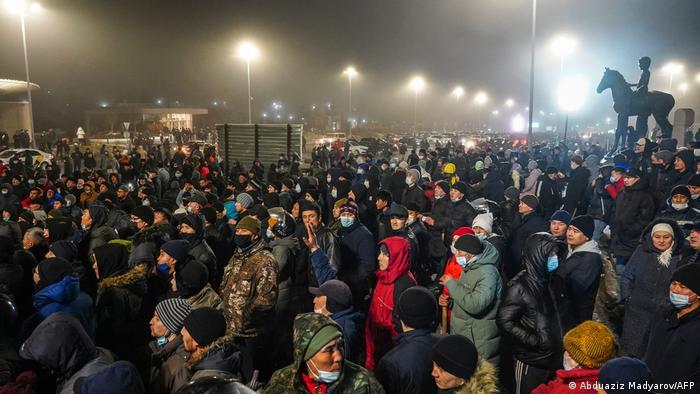 Mass protests hit streets: protests were first triggered by a dramatic rise in the price of fuel. Within a matter of days, the unrest spread throughout the oil-and-gas-rich former Soviet republic of 18 million, morphing into a broad, anti-government protest wave 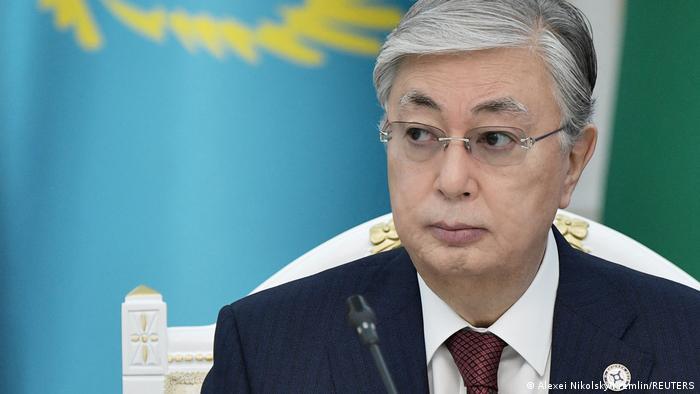 Leadership under pressure: to placate protesters, fuel prices were cut. President Kassym-Jomart Tokayev (pictured above in 2019) on Wednesday dismissed the government. Countrywide protests, however, continue unabated 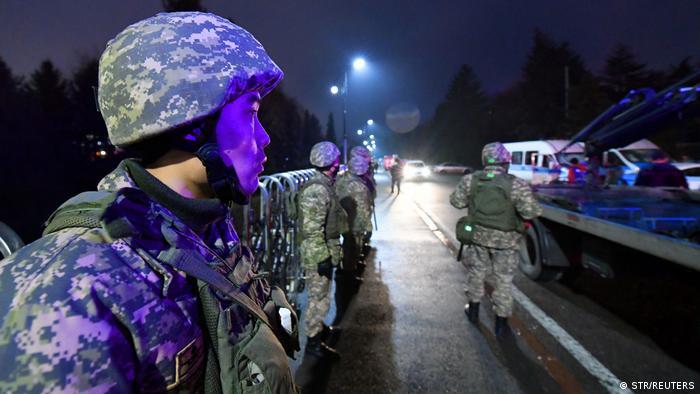 Military deployed to Almaty: President Tokayev has announced a state of emergency, leading to nationwide night-time curfews, limits to where people may move and a ban on gatherings. Tokayev has also called on the Collective Security Treaty Organisation (CSTO), a Russia-led military alliance, to provide help 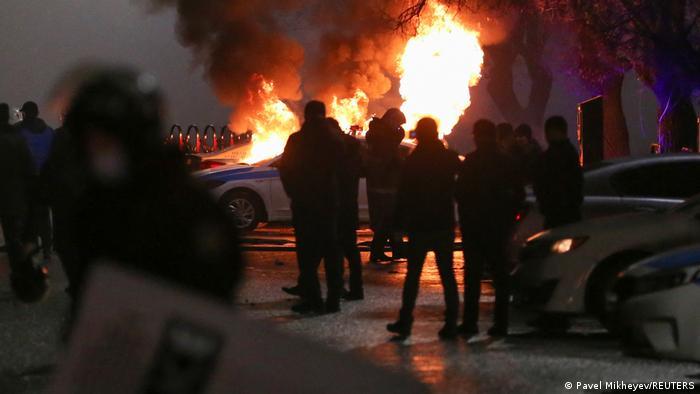 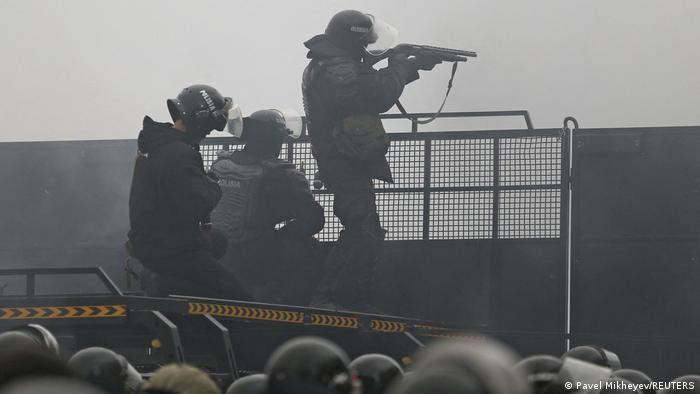 Casualties and fatalities: according to government reports, at least 18 security officers have been killed. Authorities also say "dozens of attackers" have been "eliminated", meaning scores of civilians have been killed as well. Over 1,000 people have reportedly been injured. Almost 400 were sent to hospitals around the country for treatment, according to Deputy Health Minister Azhar Guiniyat 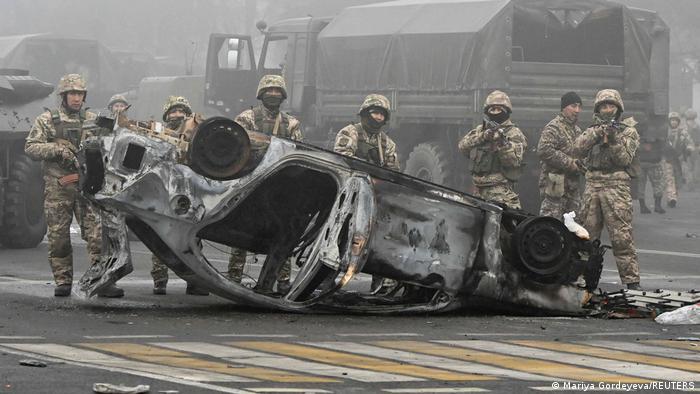 Rare unrest: large-scale protests are unusual in Kazakhstan, which remains under authoritarian rule. President Tokayev, who succeeded long-time ruler Nursultan Nazarbayev in 2019, faces the gravest crisis of his tenure. The 81-year-old Nazarbayev is said to retain considerable influence in the country, and is a close ally of Russian President Vladimir Putin 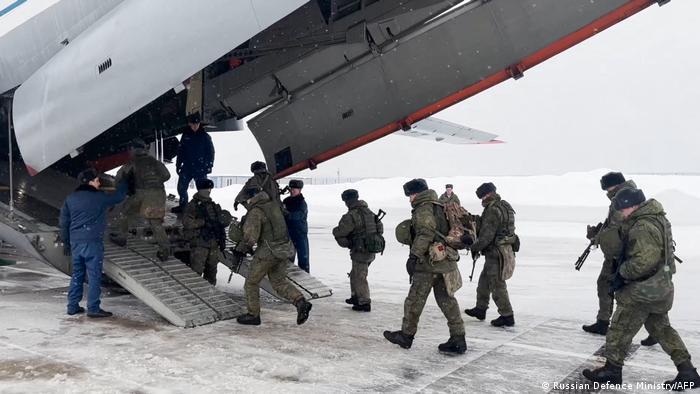 The tense nature of the issue was demonstrated at the end of 2020, when Russian Duma deputy Vyacheslav Nikonov described Kazakhstan's territory as "a great gift from Russia". The Kazakh Foreign Ministry protested, Nikonov rowed back, Tokayev wrote an article defending Kazakhstan's independence.

Now, Russia's actions in Kazakhstan are being discussed again, especially on social networks. Putin could seize the deployment of troops as an opportunity to build up Russian presence there, according to one commonly held opinion. Russia currently has no bases in Kazakhstan.

In any case, the unrest in Kazakhstan is a nightmare for the Russian president. The Kremlin calls such events "colour revolutions" – modelled on the Rose Revolution in Georgia and the Orange Revolution in Ukraine. Moscow accuses the West of being behind it.

The last successful uprising was in Armenia, which has close ties with Russia, in 2018. In Belarus, the ruler Alexander Lukashenko was able to hold on to power by force in 2020. "All of Russia's major neighbours have been shaken by social unrest," said Russia expert Hans-Henning Schröder. "Were I to be sitting in the Kremlin, I would already be thinking about whether Russia is next on the list."

The balance of power on Europe's eastern borders is shifting. Georgian historian Beka Kobakhidze speaks from Tbilisi about rivalry and emerging alliances in the region, an ... END_OF_DOCUMENT_TOKEN_TO_BE_REPLACED

After more than a month of war, there is a new ceasefire between Armenia and Azerbaijan. But whether it will last remains questionable. The conflict in Nagorno-Karabakh sees ... END_OF_DOCUMENT_TOKEN_TO_BE_REPLACED

Sensitive to the threat of wider confrontation, Russia and Turkey are for now limiting involvement in the Nagorno-Karabakh conflict to providing humanitarian assistance and some ... END_OF_DOCUMENT_TOKEN_TO_BE_REPLACED

Azerbaijan and Armenia have been at war again over the Nagorno-Karabakh region in the South Caucasus for over a month. Three ceasefires have failed. The conflict is taking its ... END_OF_DOCUMENT_TOKEN_TO_BE_REPLACED

Fraught with disagreement, relations between the EU and Turkey under Erdogan have rarely been easy. Bearing in mind recent developments, the Union needs to present a clear and ... END_OF_DOCUMENT_TOKEN_TO_BE_REPLACED

The Armenian diaspora in France – the largest in Western Europe – is urging the country to do more to support Yerevan in the Nagorno-Karabakh conflict. But Paris is, so far, ... END_OF_DOCUMENT_TOKEN_TO_BE_REPLACED
Author:
Roman Goncharenko & Emily Sherwin & Olga Sosnytska
Date:
Mail:
Send via mail

END_OF_DOCUMENT_TOKEN_TO_BE_REPLACED
Social media
and networks
Subscribe to our
newsletter