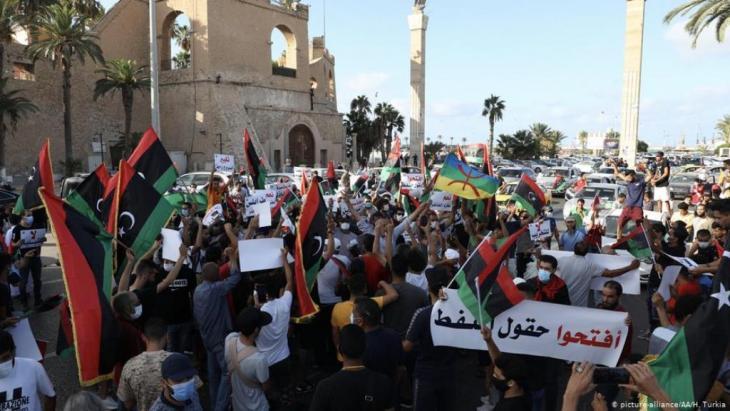 Just as in Lebanon and Iraq, civil war-torn Libya is also experiencing a wave of protests against corruption and undignified living conditions. The difference here is that demonstrators in Libya are confronted with two governments at once. By Kersten Knipp and Khaled Salameh

For weeks now, predominantly young people have been joining street protests in various towns and cities across Libya. Now, it appears as though one of the two rival governments has cracked under the pressure: in response to the demonstrations, the cabinet in the eastern Libyan city of Tobruk offered to resign on Sunday, 12 September. A spokesman explained that the government would remain in power until the next session of parliament, which still needs to authorise the resignation. As yet, of course, no date has been set for this to happen.

For two years now, the nation has been governed by two different centres of power, each hostile to the other and supported and armed by different foreign powers. The cabinet in Tobruk in the north east of the country fled the western capital of Tripoli in 2014 following violent clashes with rival groups. Since then, a second government has formed in Tripoli under the leadership of politician Fayez al-Sarraj. Although this government has been internationally recognised, it has not been legitimised by elections.

The demonstrators are protesting against a whole series of grievances. In particular, they take issue with rampant corruption and a worsening quality of life. This includes frequent power outages lasting several hours and an inadequate water supply. Additionally, the banking system is mired in a crisis that means many people are only able to withdraw small sums of cash.

The country's healthcare system has been weakened – and that at a time when coronavirus is spreading rapidly. According to the Johns Hopkins University, Libya has documented more than 23,500 infections with the virus claiming 368 lives (status: 15 September). 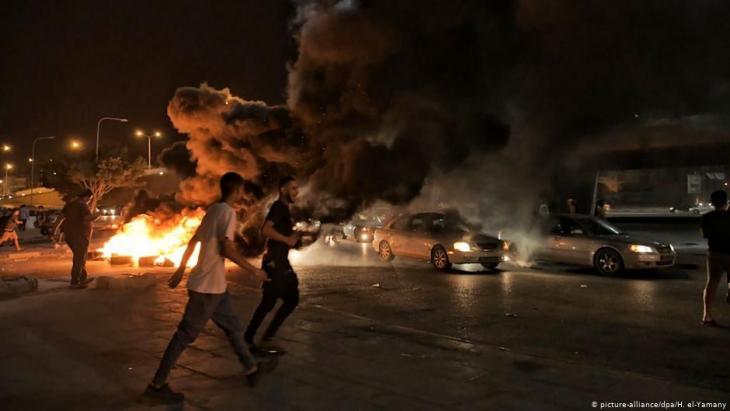 Young people during a protest in Benghazi, Libya. Thomas Volk, head of the southern Mediterranean dialogue programme at the Konrad Adenauer Foundation in Tunisia, says it is remarkable that the young protesters' anger is directed at both governments in Libya: "The people taking to the streets in recent weeks are losing more and more faith in both governments – the one in Tripoli just as much as the one in Tobruk," he says

Thomas Volk, head of the southern Mediterranean dialogue programme at the Konrad Adenauer Foundation in Tunisia, says it is remarkable that the protesters' ire is directed at both political power centres. "The people taking to the streets in recent weeks are losing more and more faith in both governments – the one in Tripoli just as much as the one in Tobruk," he says.

The population is weary, Volk tells DW. "Since the revolution in 2011, Libya has barely experienced calm. Peace talks and initiatives have failed again and again, the people aren't seeing any progress at all – on either side." In Volk's view, there are no longer two politically monolithic blocks. "Libyan society can no longer really be appreciated along political lines," he says.

Distance from both power centres

One protest organiser confirms this to DW: at present in Libya, there is no one conflict party, no one political body and no one religious figure who can solve the country's crisis, says Ahmed Abu Arqoub, one of the spokespersons and founders of "Harak al-Shabaab 23/08", a youth organisation founded on 23 August this year that is part of the new protest wave. The first rallies also began on 23 August, initially in western Libya.

Arqoub stresses that the movement is not associated with either of the Libyan power centres. On the contrary, the most influential actors on both sides thus far are a big part of the problem. "The only solution is for these individuals to withdraw from politics. We reject any political solution that involves the old parties to the conflict!" says Arqoub.

However, the demonstrators' demands have at times met with huge resistance. According to a report by Human Rights Watch (HRW), they were repeatedly attacked in Tripoli during the second half of August by armed groups allied with the Al-Sarraj government. HRW says that 24 demonstrators were arrested in the attacks; just 13 of those have since been set free. Those released report, among other things, that they were beaten during their detention and forced to promise not to take part in any further protests.

In view of such resistance in particular, it is important to the protest movement that the rallies are not limited to one of the two territories in Libya, insists the activist Arqoub. "Both parts of the movement are in close contact. We co-ordinate our actions and agree on our goals," he says. 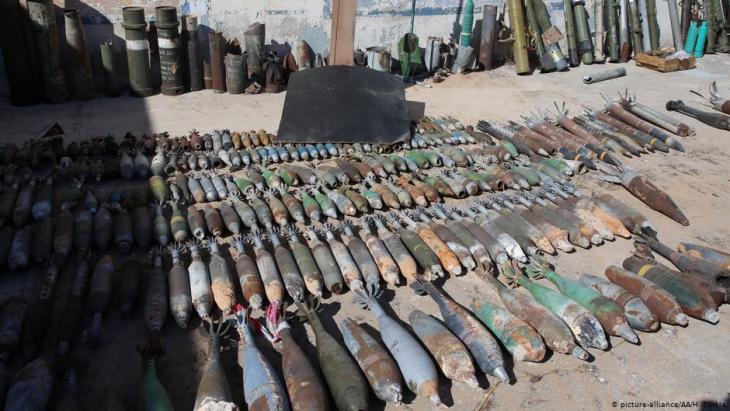 Rows and rows of shells and other ammunition lined up in Libya. Earlier this month, the UN Security Council adopted a resolution demanding that all countries enforce the widely violated UN arms embargo on Libya and withdraw all mercenaries from the North African nation. According to UN Special Envoy to Libya Stephanie Williams, foreign forces are flooding the country with weapons

But the demonstrators are not only contending with domestic opponents. Libya also finds itself increasingly under the influence of foreign players. In early September, UN Special Envoy to Libya Stephanie Williams warned that the country was entering a "critical phase". Foreign forces have flooded the country with weapons, she said, adding that since July alone, 70 supply planes have landed with material for General Khalifa Haftar – Al-Sarraj's opponent who is supported among others by Russia, Egypt and the United Arab Emirates and affiliated with the parliament in Tobruk.

In the west of the country, on the other hand, forces allied with the government led by Al-Sarraj have taken receipt of supplies from a total of 30 planes. Al-Sarraj's military sponsors include Turkey and Qatar in particular.

The advancing militarisation of the country means that the demonstrators have to show great courage. But they are determined not to be put off by these developments. "We are aware of the complexity of the situation," says Ahmed Abu Arqoub. "We are fully aware that Libya is under the influence of regional and international forces. This is exactly why we are determined to keep our distance from all of them. That's the only way we can thwart their plans!" he says, adding that they have absolutely no intention of allowing themselves to be exploited by any of the parties involved.

Arqoub himself, however, lives in exile in Moscow, the capital of one of the countries whose involvement in the Libya conflict is intensifying and becoming increasingly visible.

"We are a movement that strives for national reconciliation, unity and reparation for damages incurred in the conflict," insists Arqoub, adding that his movement campaigns together with other protesters for civil rights and constitutional principles. 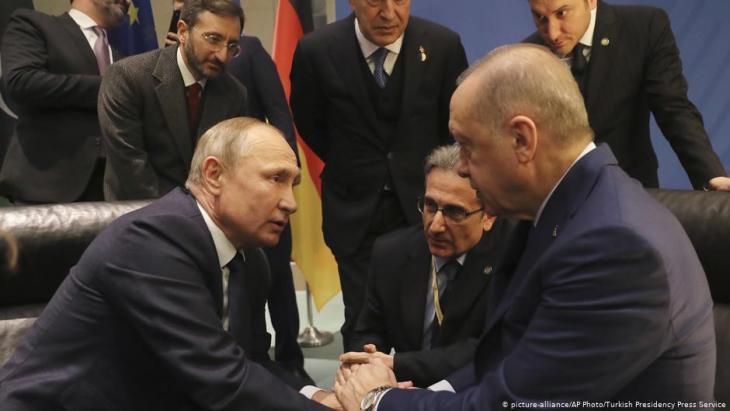 Russian President Vladimir Putin (left) and Turkish President Recep Tayyip Erdogan at the Berlin International Conference on Libya, January 2020. General Khalifa Haftar, who is affiliated with the parliament in Tobruk, is supported among others by Russia, Egypt and the United Arab Emirates. His opponent, Fayez al-Sarraj, who heads up the internationally recognised government in Tripoli, is supported among others by Turkey and Qatar.

"Libyans must determine their own path"

A solution to the conflicts in Libya can only be initiated by the Libyans themselves, agrees Thomas Volk from the Adenauer Foundation. "At present, however, a whole series of foreign players are exerting an enormous influence. This makes the role of the UN all the more significant," says Volk, adding that it is of primary importance to boost the international Libya mission (UNSMIL), which must then help to create the prerequisites for peace talks. "After that, it is up to the Libyans themselves to decide what political path the country takes," he says.

The activist Arqoub takes a similar view and has already announced a round of fresh demonstrations.

The term "Tuareg" refers to tribes and nomads who speak dialects of Tuareg and live in Targa, an area in south-west Libya recently renamed Wadi Al-Hayat but previously known as ... END_OF_DOCUMENT_TOKEN_TO_BE_REPLACED

The Islamic Republic has been unable to quell the civil unrest that erupted three months ago, after Mahsa Amini died after being detained for violating hijab rules. Now the ... END_OF_DOCUMENT_TOKEN_TO_BE_REPLACED

Cries of "Benghazi!" still resonate across the USA ten years after a deadly terrorist attack in Libya killed the U.S. ambassador and three other Americans. Ethan Chorin re-tells ... END_OF_DOCUMENT_TOKEN_TO_BE_REPLACED

After a two-year hiatus, the Arab League re-convened at the beginning of November in Algiers against a backdrop of uncertainty and discord. By Pierre Boussel END_OF_DOCUMENT_TOKEN_TO_BE_REPLACED

In the run-up to the COP27 global climate summit, hosted by Egypt in November, it is worth noting that little rainfall, aggressive heatwaves and worsening drought make the Middle ... END_OF_DOCUMENT_TOKEN_TO_BE_REPLACED

The southern shores of the Mediterranean Sea are losing sand faster than almost anywhere else. The ecological and economic damage is immense. The good news is, there are ways to ... END_OF_DOCUMENT_TOKEN_TO_BE_REPLACED
Author:
Kersten Knipp & Khaled Salameh
Date:
Mail:
Send via mail

END_OF_DOCUMENT_TOKEN_TO_BE_REPLACED
Social media
and networks
Subscribe to our
newsletter