Skip to main content
Protests in the Arab World

The protest movement toppled the government in Tunisia and is currently rattling Hosni Mubarak's regime in Egypt. Will the entire Arab world be gripped by a general uprising of the people, ending in democracy and liberation from authoritarian regimes? According to Ute Schaeffer, it's not as simple as all that

"It is civil society, which is currently being so courageous, that will win," writes Ute Schaeffer

​​The fact that the political uprising has seized one country after the next can be attributed to the fact that the reasons for the protests are comparable, as are the goals.

The protest is aimed at the rulers and the elite, who have placed the politics and economics of their respective countries at their personal service.

For decades, these rulers have sat in the comfortable armchairs of power and lost sight of the people outside the palaces. They have completely overlooked their political responsibility, namely to ensure that development does not mean development for a few, but rather for many.

The oligarchs in the royal palaces of the Arab world have long lost touch with the realities of their countries and are not aware of the needs of their people. And these are, after all, strikingly simple: Can I pay for my bread? Can I find work? What are my personal prospects?

The power of the media

Tunis will presumably not become the Gdansk of the Arab world. It was the uprising of Polish shipbuilders in Gdansk in 1980 that gave birth to a democratic revolution that influenced an entire region. However, in contrast to the Soviet Union, which was centrally controlled from Moscow, the political centres of the Arab world do not have a common political leadership but are instead very heterogeneous.

Nevertheless, there are powers that elicit a sense of togetherness in Arab societies. These powers are now seeing to it that the anger and protest experiences are shared. First and foremost, there is the pan-Arab media. Al-Jazeera and Al-Arabiya are perhaps the most significant engines for the movement, carrying images and information from one place to the next. 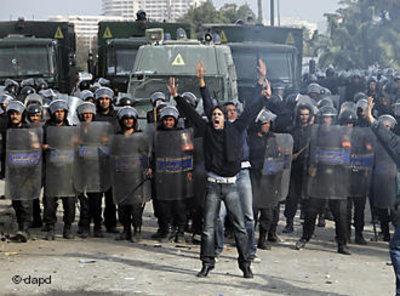 The Egyptian capital Cairo was the scene of violent clashes on Friday, when tens of thousands of anti-government protesters confronted police and threw stones at them; the police responded with rubber bullets, tear gas and water cannons

​​Closing off the population from information may still function in Africa's tyrannies and destitute nations, but this is no longer the case in Arab countries. Civil societies in the Arab world may – in the opinion of their own political apparatuses – have nothing to say in their own countries, but on the Internet and in blogs and forums, these voices carry weight.

Egypt with its government-controlled television is still trying to compete with the powerful Arab competition. But the state-run propaganda machine has long since lost its credibility. In many of the region's countries, bloggers and journalists are under pressure because the regimes know that free voices can pose a threat to their grip on power.

The social reasons for the protests can be repaired here and there. But it is questionable whether the people will allow their courage and their will for change to be bought. The movement is as wide as never before. It isn't only students, intellectuals, or Islamists sustaining the protests; it is the man on the street, the teacher, the lawyer, the bank employee who is putting up resistance. It is even – as was the case in Tunisia – the rural population, which is finding its voice after years of being forced to exist in silence on the political fringe.

This could cause problems for this year's planned undemocratic elections. In Yemen, President Ali Abdullah Saleh, who has already been in power for over three decades, wants his term extended so that he can remain in office for life. Hosni Mubarak in Egypt – considered a partner to the West – has had a grip on the presidential post for just as long. He already had the last parliamentary elections manipulated and now wants to run for president again. For his succession, he is already planning a family solution similar to the one adopted by the Assad family in Syria: Mubarak's son, Gamal, is being reared to take over.

"The more the world grows together, the more pressure there will be on regimes to be accountable for their policies and to allow change," writes Ute Schaeffer

​​How are these protests in the Arab world going to end? European media often foresee Islamists taking the helm in the region. But the breadth of the protest movement contradicts this hypothesis.

It is civil society, which is currently being so courageous, that will win. There will be regime changes here and there. Elections will become fairer; parliaments could possibly develop a stronger role and the range of political parties widen. All these are significant steps to greater democracy.

Perhaps the most important lesson that Tunisia and Egypt can teach authoritarian rulers from Minsk to Harare, from Tripoli to Ashgabat, is that in a globalised world, societies can no longer be isolated and information can no longer be arbitrarily stopped or filtered. The more the world grows together, the more pressure there will be on regimes to be accountable for their policies and to allow change.

Protests in Egypt
Egypt's "Day of Anger "
With Mohamed ElBaradei's return to Egypt, demonstrations planned for after Friday prayers and the authorities' restriction of access to the Internet, the situation in Egypt is set to escalate over the weekend. Al-Masry Al-Youm assesses the significance of the protests on 25 January

END_OF_DOCUMENT_TOKEN_TO_BE_REPLACED
Social media
and networks
Subscribe to our
newsletter