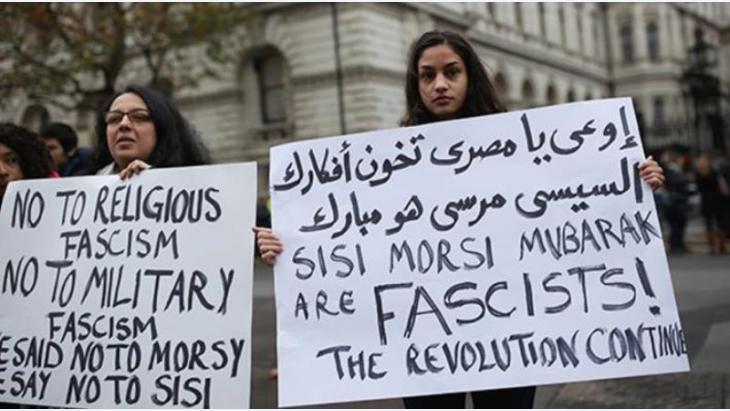 Protests in the Middle East
No tyranny without Egypt

Insults directed against Egyptian President Abdul Fattah al-Sisi have been particularly prominent among the hundreds of chants by Arab protestors in Algeria, Sudan, Iraq and Lebanon during the recent months of demonstrations. The question is, why? By Sherif Mohyeldeen and Noha Khaled

Why was Abdul Fattah al-Sisi insulted by Arab protestors? And why have seemingly local grievances, often centred on economic and governance issues, been imbued with an anti-Sisi tone? The answer can perhaps be found in the famous comment by the former U.S. secretary of state Henry Kissinger, who once remarked that there could be no war against Israel without Egypt and no peace without Syria. This could be taken not only as an assessment of the constants in the Arab-Israeli conflict; it could also be seen as a wider assessment of the politics of the region and Egypt’s indispensable role within them.

What is the nature of power in the Arab world? Authoritarian as they are, Arab states remain highly centralised, weakened by limited capacities in governing their societies and are mostly held captive by clientelist networks. This has ensured a high degree of vulnerability to the interaction of events throughout the region. Ruling elites in one country are affected by the fate of ruling elites in other countries. Ideas circulate rapidly between different Arab societies, who all speak a common language, showing why Arab regimes are often incapable of imposing total control over their societies.

At the heart of regional politics

Egypt has long been at the heart of the tightly-knit structure of regional politics. The military coup of 1952 inspired a series of similar coups from Libya to Iraq, in parallel with the spread of Nasserism and Arab nationalism throughout the Arab world, followed by resurgent Islamism in the 1970s and 1980s.

The central role of the conflict with Israel, seen as the "common enemy", served as an additional catalyst entrenching the interactive nature of regional politics.

With the coming of globalisation and the technological changes it brought since the late 1990s, the region took an irreversible turn toward heightened interaction, even as the legitimacy of regimes was on the wane. This reached its climax in 2011 when protests erupted across the region. The autocratic systems that had shaped the status quo had to go either the way of greater democracy to address popular demands, or greater tyranny to coerce increasingly unruly societies.

Consequently, the brief and chaotic learning process of revolt through which Arabs copied each other’s tactics and slogans was gradually trumped by a longer and more organised resistance to change by the ruling elites. Once again, Egypt took centre-stage in this regard with the military coup of 2013 against then-president Mohammed Morsi. This was followed by a shift when Sisi imposed a much tighter form of totalitarianism to replace the mild authoritarianism that had been in place under former president Hosni Mubarak.

One can safely say that a "Sisi doctrine" has taken hold across the region, characterised by heavy-handed measures to suppress all signs of dissidence in societies. The diminishing margin of tolerance in Saudi Arabia and the wave of arrests among royals, opposition figures and previous regime loyalists by Crown Prince Mohammed bin Salman is telling in this regard.

A similar approach has been visible in the United Arab Emirates and Bahrain, as well as a partial rolling back of reforms in Morocco and the increasing clout of Libya’s General Khalifa Haftar, who aspires to be another Sisi.

None of these moves could have been imaginable had Egypt not organised a coup against Morsi, followed by a tightening of regime control. Egypt’s regional weight explains why the actions of the Sisi regime have echoed across the Middle East and perhaps even into Turkey. As it did during the 1950s, the country’s regime has set new benchmarks for tight state control over society. That is the reason why Sisi has been condemned by protestors in recent months.

Syria’s position in this context is less dictated by its weight and more by being the geographic and demographic cornerstone of the Levant. The repression initiated by President Bashar al-Assad against his own people and its regional and global ramifications attest to the instability Syria can create in the region, despite its relatively limited size and economy. Syria is a key state, not because its neighbours tend to imitate its policies, which are far too brutal and costly to be applied elsewhere, but because it is indispensable to regional stability. Syria is not the country whose actions have the most impact regionally, but it is potentially the most volatile one.

If one had to apply Kissinger’s comments on the Arab-Israeli conflict to describe regional politics, we could safely say that there is no tyranny without Egypt and no democracy without Syria.

Noha Khaled is an Egyptian writer and researcher. Her work focuses on modernisation and state transformation in the Middle East, with a focus on Turkey and Iran.

Chinese President Xi Jinping's visit to Saudi Arabia in December 2022 may have rattled Washington, but it simply highlighted the Arabs’ desire to diversify their foreign relations ... END_OF_DOCUMENT_TOKEN_TO_BE_REPLACED

Nouara may be 65, but she is ready to join thousands of others who burn their ID and pay traffickers for the chance of a new life in Europe. Zineb Bettayeb reports END_OF_DOCUMENT_TOKEN_TO_BE_REPLACED

In Doha, Arabs from Morocco, Tunisia, Egypt and Algeria are gathering to celebrate the first ever FIFA World Cup to be held on Arab soil. The criticism from Europe? Over the top, ... END_OF_DOCUMENT_TOKEN_TO_BE_REPLACED

"Rebel Game: The Power of Football in the Middle East and the Qatar World Cup", an anthology published by Middle East researchers Jan Busse and Rene Wildangel, takes the upcoming ... END_OF_DOCUMENT_TOKEN_TO_BE_REPLACED

After a two-year hiatus, the Arab League re-convened at the beginning of November in Algiers against a backdrop of uncertainty and discord. By Pierre Boussel END_OF_DOCUMENT_TOKEN_TO_BE_REPLACED
Author:
Sherif Mohyeldeen & Noha Khaled
Date:
Mail:
Send via mail

END_OF_DOCUMENT_TOKEN_TO_BE_REPLACED
Social media
and networks
Subscribe to our
newsletter