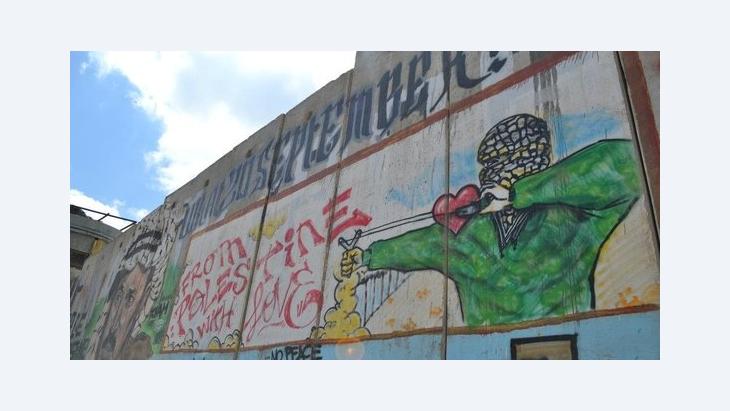 Protests in the Palestinian Territories
A Belated Arab Spring for Palestine?

﻿Demonstrations by thousands of Palestinians against rising food and fuel prices have alarmed the rulers in Ramallah: the government of Salam Fayyad is coming under increasing pressure as people demand explanations for the country's ongoing economic plight. Is Palestine on the brink of an upheaval like the Arab Spring that swept through other countries in the region? By Fabian Schmidmeier

The repercussions of the world financial crisis, along with the Israeli authorities' insistence on withholding customs duties, are plunging the Palestinian National Authority into ever-greater financial difficulties. The government has been unable to pay full salaries to its employees for several weeks now.

International financial institutions have refused for some time to lend the Fayyad government money and are making it wait for agreed payments. Around 200 million dollars from the USA are still awaiting approval by Congress, which has been delayed by the initiative for the recognition of statehood by the UN.

In order to fill at least part of the budget gap, the National Authority has now declared that it will raise the already-high petrol prices by eight per cent. This is the only way to pay last month's salaries, it claims. The statement provoked an outraged reaction by the country's inhabitants. The petrol price has climbed to a record high. A litre now costs 1.70 euros, the same as in the State of Israel. 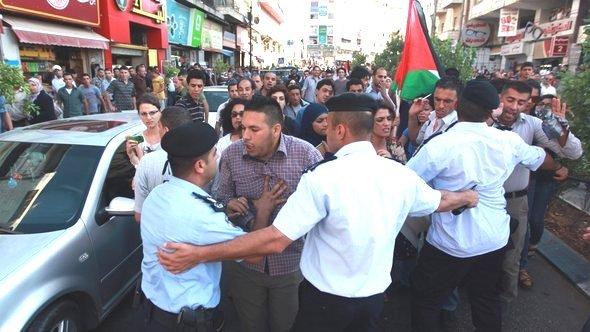 Protest as result of rampant corruption, social injustice and poverty: at 1,400 US dollars, average per capita income for Palestinians lags far behind that of their Israeli neighbours. A recent UN report found that 40 per cent of the 1.6 million Palestinians in the Gaza Strip live in poverty

​​The Palestinians' average per capita income, 1,400 dollars, is far below that of their Israeli neighbours. The mood is now especially charged amongst the younger inhabitants of the Palestinian territories.

On 2 September, a young man doused himself with petrol and set himself on fire in a public square in Gaza. It was a similar incident that triggered the Jasmine Revolution in Tunisia in January 2011, which led to the overthrow of President Ben Ali.

People in Palestine are now organising protests like those that took place in the nations of the Arab Spring, increasingly relying on the help of social networks. The Palestinian transport community called for a general strike on the 12th of September, and taxi drivers responded. They almost completely paralysed traffic in the Palestinian cities, demanding from the National Authority a minimum wage of 500 euros because they now find themselves spending most of their income on petrol.

Should their demands not be met, new strikes and protests threaten, which could become more violent.

The anger of the Palestinian people is currently focused mainly on one person: Prime Minister Salam Fayyad. He is accused primarily of mismanagement, but in the eyes of many Palestinians he is also "a puppet of the West and of Israel" and is thus not acting in the best interests of his own people.

In Hebron and other cities people jeered while burning effigies of Fayyad. Palestinian President Mahmud Abbas declared at a meeting of the Arab League in Cairo in mid-September: "The Palestinian Spring has begun." He said he intended to respond to the protesters' wishes and that he supported their claims.

But is it really only high prices and a lack of prospects, coupled with enormous rage at the inefficacy of their own National Authority, that are driving people onto the streets?

Kareem Asakra, a political analyst and journalist at the independent Palestinian news agency Maan News, regards the protests as an expression of pent-up frustration that in his opinion is only superficially about the economic situation and the autonomy government. "The real reason for the protests is the general feeling of disappointment at the deadlock of the peace process and Israel's refusal to recognise the fundamental rights of the Palestinians," he says. 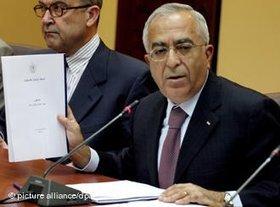 The focus of public criticism: Palestinian Prime Minister Salam Fayyad. The authority is currently experiencing one of the "most serious financial crises" since its inception in 1994

​​Although the protests are also directed at Salam Fayyad as Prime Minister of the autonomous territories, Asakra believes that the Palestinians' despair stems above all from a feeling that they are the target of deleterious Israeli policies.

"People are fighting against an occupation policy that shatters their dream of an independent state within the 1967 borders." While signs seem to be pointing to a Palestinian Spring modelled on that of the other nations, the analyst asserts that "the occupation plays a much larger role for the Palestinians than economic factors." This fundamentally distinguishes the situation from the circumstances in the other Arab states, Asakra notes.

Although the Fatah is forfeiting more and more sympathy due to the economic malaise, other political groupings do not stand to benefit in the long run from its dwindling popularity. While Hamas in particular once managed to mobilise the discontented for its own ends, the Palestinians apparently give the Islamist movement a large portion of the blame for the catastrophic conditions in the Gaza Strip, not viewing it as competent to solve the problems there and in the West Bank on its own.

Frustration with the two major, established Palestinian parties? Surely this forms a favourable breeding ground for new political movements – such as the Egyptian "April 6 Youth Movement" or the Moroccan "20 February Movement", where in particular young people came together via social networks such as Facebook and Twitter, joined by bloggers, to organise protests.

Nevertheless, Kareem Asakra, also a blogger, does not yet see any realistic chance for such a movement to emerge in Palestine. "The situation in the occupied territories differs fundamentally from the conditions in other Arab countries. Palestine is not only politically, but also geographically divided," he says.

Anger and disappointment over the stalemate of the peace process and the Israeli settlement policies: political analysts such as Kareem Asakra see the protests as an expression of enormous frustration that only superficially has to do with the economic situation and the autonomy government

​​"That makes it more difficult for the youth there to bring about change. Up to now, Hamas and Fatah have always been able to prevent that from happening by insinuating that the occupiers or the West were behind any revolutionary dynamics. But gradually a third force is coming onto the scene, acting mainly within social networks.

Although the people are explicitly demanding the resignation of the Fayyad government and the demonstrations thus still seem to be directed primarily against their own government, the Israeli newspaper Maariv reported a fear amongst Israeli security circles that the protests could soon reach the Israeli settlements on Palestinian territory.

Israel is therefore watching the social protests in the West Bank with great concern, and officials there are anxious that the economic decline could massively weaken the Palestinian Authority or even lead to its collapse.

Should the Authority in fact fall, the West Bank would likely lapse into chaos. This comes at the worst possible time for Israel, at a moment when the entire region is destabilising: in the Sinai, for instance, the Egyptian leadership under Mohammed Mursi is being challenged by militia associated with Al Qaida, which have also attacked Israeli border posts. 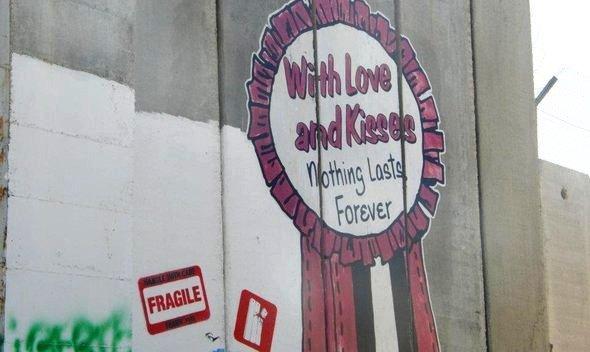 Concept for peaceful resistance: "Once there was the intifada of stones. Today our stones are non-violence"

​​Because of the blockade, the Gaza Strip is still a smouldering hot spot for potential conflict. And in the north Israel is endangered by the Assad regime, so that the country is weighing a military attack in order to prevent chemical weapons from ending up in the hands of terrorists. And, last but not least, there's the Hezbollah, nervous now with the civil war in Syria.

Above all, though, preparations are under way for a possible military strike against Iran's nuclear facilities. Therefore, the government of Benjamin Netanyahu is at pains to keep the Palestinians as quiet as possible, because Israel can scarcely afford at this stage to wage battle on a new front. For this reason, Netanyahu intends to pay the Palestinians an amount equivalent to 50 million euros. This would be only a drop in the ocean, as the Palestinians are actually facing a financing gap of about 400 million US dollars according to the World Bank.

To add to the list of problems, the settlement issue seems to be getting more and more out of control. Radical settlers are attacking Palestinian civilians with increasing frequency, confiscating land or burning olive trees, which for many Palestinians spells financial ruin. As the perpetrators are hardly ever prosecuted for these crimes, a sense of powerlessness is spreading in the Palestinian civilian population.

"We have the impression that the world is sleeping," says Haitham al-Khatib, a Palestinian activist and photographer from Ramallah. "We want our rights to finally be respected and we want to live in peace."

Abandoned by the world

Although they often cooperate today with international and Israeli peace activists, the Palestinians still feel abandoned by the rest of the world: "At least we now have completely different tools at our disposal than in the past, for example YouTube, where we can publish videos," says al-Khatib. "And no checkpoint can stop us from communicating with each other via Skype. This gives us young people hope."

It's only a matter of time before the younger generation in particular let loose their rage at the miserable conditions they live under. More than half of the Palestinian population is under the age of 18. Israeli security circles are expecting, among other things, that protesters might march towards the hated settlements. Clashes with the settlers would then be inevitable.

Most agree that this would set off a third intifada. It would be an Arab Spring with its own Palestinian twist. Haitham al-Khatib hopes however that the concept of the "White Intifada", that is to say an intifada without violence, would prevail: "Once there was the intifada of stones. Today our stones are non-violence. All we want is freedom and peace."

The history of Jews and Muslims is far more entangled than you might imagine – but you have to listen out for it. In "Recording History", Christopher Silver takes us on a sonic ... END_OF_DOCUMENT_TOKEN_TO_BE_REPLACED

Welcome to the world of Al Qasar, where Arabic music collides head-on with punk and psychedelic to create something powerful and beautiful. "Who Are We" is a raucous, subversive ... END_OF_DOCUMENT_TOKEN_TO_BE_REPLACED

Like Christianity, Europe's history is one of migration. Both have strong roots in the Orient and in cultures thousands of years old. Cultural historian Bernhard Braun invites us ... END_OF_DOCUMENT_TOKEN_TO_BE_REPLACED

Russia is leaving no stone unturned in its attempts to make the Islamic Republic an ally in the war against Ukraine. Fortunately for Vladimir Putin, the mullahs in Tehran are ... END_OF_DOCUMENT_TOKEN_TO_BE_REPLACED

When she ascended the throne, millions of Muslims still lived under British rule. Later, Elizabeth II appealed for tolerance in a multi-religious society. She was the first ... END_OF_DOCUMENT_TOKEN_TO_BE_REPLACED
Author:
Fabian Schmidmeier
Date:
Mail:
Send via mail

END_OF_DOCUMENT_TOKEN_TO_BE_REPLACED
Social media
and networks
Subscribe to our
newsletter