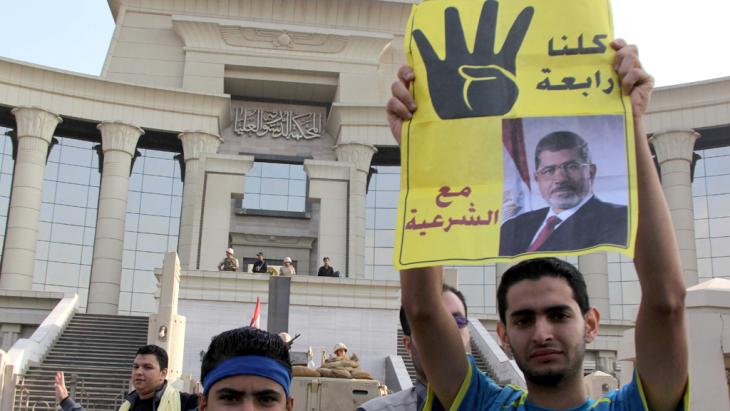 A Test of the Justice System

Are Egypt's courts using different standards when it comes to the trials against former dictator Hosni Mubarak and former president Mohammed Morsi? Karim El-Gawhary in Cairo says it's not impossible that the trials will end up with Mubarak a free man and Morsi in prison

Following his abduction by the military and four months of detention, the democratically elected president of Egypt, Mohammed Morsi, has finally emerged in the dock of an Egyptian criminal court sitting at an unknown site.

However fairly or unfairly the judges deal with the case, the circumstances surrounding it are highly political. Morsi's first words in court made that clear, when he described himself as the legitimate president of the country who had been ousted by a putsch. A symbol of Morsi's willingness to challenge the judges is the argument over whether he should wear prison uniform or civilian clothing.

It's not just Morsi who's on trial, but the whole country – the old regime, the government dominated by the Muslim Brotherhood, and the current military rulers. Morsi's trial runs parallel to that of his predecessor, Hosni Mubarak – and the Egyptian justice system is facing a test as to whether it will judge both cases by the same standard. 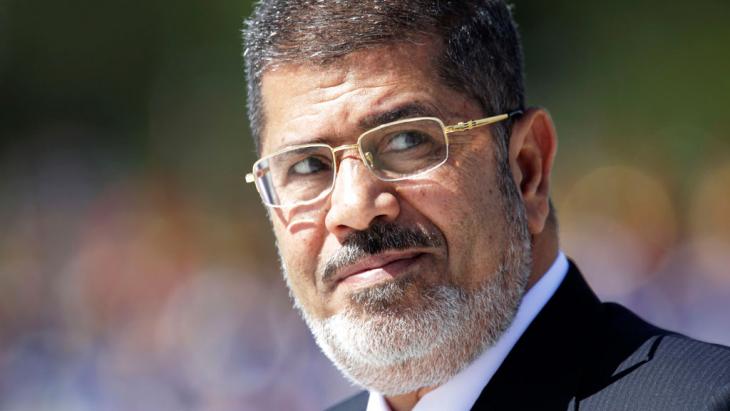 "I am the legitimate Egyptian president and I call on the court to end this farce," said Morsi as the trial began. Following the turbulent opening, the judges have adjourned the case until the beginning of next year

There's every chance that Mubarak will get off scot-free in the end, while Morsi will go to prison. One reason for that is that the state institutions repeatedly sabotage the case against Mubarak, while they are likely to work happily with the courts against Morsi. That's a sign how far the country's security apparatus is still in the hands of the old system.

It could well be that Morsi will be found responsible for the death of demonstrators, while the security services and the military will go without punishment for their deeds of recent years. Such selective accountability is unlikely to lead to a calming of the situation in the country.

The trial is not a solution for the political crisis in the country but a reflection of the unstable situation. The Muslim Brotherhood and the coalition which is opposed to the putsch is not strong enough to change the direction in which Egypt is going, but they have been strong enough to cripple the country for months with their protests.

And that leads us to the military's biggest problem: it knows that time is working against it. Most Egyptians are still jubilantly supporting the army chief, Abdel Fatah El-Sisi, as a saviour in their hour of need.

But El-Sisi can see what might happen if he fails at least to start to solve the people's problems in the coming months – he only has to look at the trials going on against Mubarak and Morsi.

The Egyptian series "El-Ekhteyar 2" was created by a production company with close ties to the military – and pursues a corresponding narrative. Moritz Baumstieger explains how ... END_OF_DOCUMENT_TOKEN_TO_BE_REPLACED

Looking to mobilise the Egyptians, Abdul Fattah al-Sisi and his ministers will refer to them as the "people". As soon as the Egyptians demand something of the state, however, they ... END_OF_DOCUMENT_TOKEN_TO_BE_REPLACED

The rollout of coronavirus vaccines in the Middle East and North Africa is already taking place on a massive scale, with the United Arab Emirates leading the way. Nevertheless, ... END_OF_DOCUMENT_TOKEN_TO_BE_REPLACED

Egyptian singer Umm Kulthum continuous to be an icon, almost 100 years after she published her first record. But what about the other famous women of the 1920s? In his new book, ... END_OF_DOCUMENT_TOKEN_TO_BE_REPLACED

The Prophet Muhammad never executed anyone for apostasy, nor encouraged his followers to do so. Nor is criminalising sacrilege based on Islam’s main sacred text, the Koran. In ... END_OF_DOCUMENT_TOKEN_TO_BE_REPLACED

Archaeologists have uncovered the remains of an ancient city in the desert outside Luxor in Egypt. They say it dates back to the golden age of the Pharaohs more than 3,000 years ... END_OF_DOCUMENT_TOKEN_TO_BE_REPLACED
Author:
Karim El-Gawhary
Date:
Mail:
Send via mail

END_OF_DOCUMENT_TOKEN_TO_BE_REPLACED
Social media
and networks
Subscribe to our
newsletter