Skip to main content
Publishers in the Arab World

You Don't Have a Chance, so Take it!

Almost everywhere in the Arab world, publishers have to make do without any marketing or distribution. How, then, do books reach their readers? Arab publishers met at a workshop in Abu Dhabi to seek common solutions. Gabriele Rubner has the details 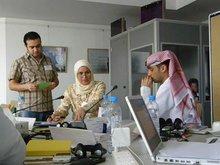 New strategies for dealing with difficult working conditions, marketing and distribution: impression of the Publishers' Training Workshop in Abu Dhabi

​​Dr. Safaa Asmy is a dentist and a practicing Muslim. "I believe in the book and strictly adhere to its precepts," she told me in all earnestness. The "book" she is referring to is, of course, the Koran. She also believes in making books and has demonstrated this in a most impressive way since she took up the business only seven months ago.

She had always told her own stories to her three children. When she finally recognized her talent, she began to write down her stories – and then sell them. Safaa Asmy sees herself first and foremost as an author, but as she couldn't find a publisher interested in printing her children's stories, she took matters into her own hands.

Over the last 6 months, she has brought a total of 15 titles to the market. She hired illustrators, searched for printers, organized readings, and spoke with bookstores. The books are stored at her home in Dubai.

"We have a large house. Nonetheless, my husband had to clear out his room for my books," laughs Dr. Asmy. "I've taught myself everything. But I still have one great problem – marketing and distribution." In order to get a handle on this problem, she now wants to learn the theoretical basics of publishing. She therefore registered for both publishers' training workshops in Abu Dhabi.

The modern equipped conference room of the Goethe Institute on the 15th floor of a skyscraper in downtown Abu Dhabi seemed like a construction site on the evening before my "Marketing and Distribution" workshop.

Soundproofed booths for simultaneous translation from English into Arabic were assembled, the microphone system installed, tables moved around, and display boards set up. The large window offers a breathtaking view of hundreds of construction cranes. In the next few months, a completely new city – New Abu Dhabi – will be built on an island in record time.

"Distribution is my mission"

Overseeing the Publishers' Training Workshop is Alexandra Bueltemeier, project manager with KITAB, a joint venture of the Frankfurt Book Fair and the Abu Dhabi Authority for Culture and Heritage, in collaboration with the Akademie des Deutschen Buchhandels (German Booksellers' Academy) in Munich. The organizing partners for the event are KITAB (Arabic for book) and the Goethe Institute for the Gulf Region.

"Hopefully, all the registered participants will arrive tomorrow on time," she says nervously. There are thick question marks next to the names on her list of those who registered by telephone. 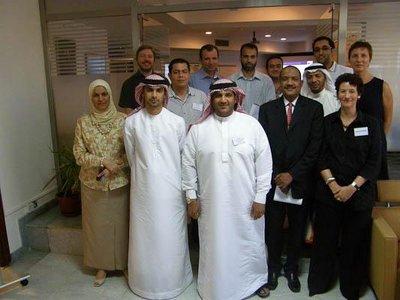 During the Publishers' Training Workshop the participants mentioned the major problems in the Arabic publisher scene: the lack of readers and the missing buyers of the books

​​The next day, almost everyone has shown up – Ali Suhail, Mohamend Shaheen and Abdullah Al Husani from Abu Dhabi, Mounes Hashen from Jordan, Nadim Mroueh from Lebanon, Youssuf Abdulmohsin Alharazi from Saudi Arabia, Ghassan Rabie from Syria, Guerfi Okba from Algeria, Mohamed Emaduddine from Egypt, and Safaa Asmy from Dubai.

After a welcome by Monika Krauss, the managing director of KITAB, we begin and jump right into our topic. I ask the participants what they understand by distribution. "Distribution is my mission. It is the most important task – and also the most difficult!" says Nadim Mroueh.

In the subsequent group session, I ask the participants to list the ways they market their books and to specify associated problems. It quickly becomes clear that it is difficult to market books in the Arab world. The numerous book fairs are the most important channels to reach the reader. In contrast to Germany, books here are sold directly to the end customers.

In most Arab countries, bookstores only exist in large cities, so people are willing to travel great distances to discover new books at the fairs. The book fairs, however, are out of the way for publishers as well.

"The airfare, the rates for the exhibition stands, and the hotel costs are enormously high. And every time, there is the question as to whether our books will be delivered to the book fair on time," complains Guerfi Okba, the Algerian. "I've often stood for days in front of an empty exhibition stand!"

One advantage of book fairs is that the publishers are paid immediately. "We often have to wait years for bookstores to pay their bills," explains Youssuf Mohsen Barak from Saudi Arabia. There is no invoicing practice, no collection procedures, and no bank transfers. Credit card fraud, corruption, and censorship are rampant.

Publishers offer large discounts to customers willing to pay in advance or immediately upon delivery. One secure option is marketing through book distributors. "As a small publisher, I am simply not listed by distributors. They won't even speak with me," says Safaa Asmy, throwing a careful glance across the table to Mohamed Emaduddine, one of the most powerful distributors in the Arab world.

Advertising for the wrong book

A lack of basic structures in the book trade makes work difficult for publishers. Books do come with ISBN numbers, but there is no list of available books. No one knows what books are being printed or what is currently available on the market. There is a severe lack of research options. Even copy protection for titles is unknown here.

"It has frequently happened that a book from my publishing house has the same title as one from a competing publisher. I then end up advertising for their books," says Ghassan Rabie from Libya, quite annoyed. Nonetheless, the lack of readers and the small number of booksellers poses a fundamental problem.

Illiteracy is commonplace. The promotion of reading could be a big issue. When I ask about the activities of the Arab publishers’ association in this respect, the participants shrug their shoulders.

Ali brings up an additional difficulty. "We all speak the same language and we have to sell across borders. Yet, every country has its own laws and they are difficult to understand!"

In the afternoon, we attempt to discover new ways of marketing and distribution. A lively discussion follows. "New customers are much too great a risk for me. I don't know if I will get paid," calls out Nadim Mroueh from Lebanon spontaneously.

A lack of trust

Safaa Asmy is also sceptical. She doesn't want to sell her books at Carrefour, for example, as she wouldn't buy any books there either. 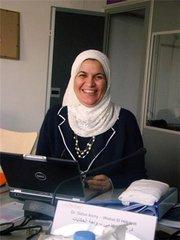 Safaa Asmy thinks of herself as a writer. Since no publishing house releases her children's story she takes matters into her own hands

​​The whole group took a critical stance with respect to the rapidly growing trade in books on the Internet. Most people in the Arab world still don't have a computer at home, while few trust billing through credit cards or delivery by post.

My suggestion to intensify efforts in existing marketing strategies before seeking out new ones was met with open ears. If we provide optimal customer service, will this result in greater sales? How can we use our book fair presence to attract subsequent business? Do small presents help maintain friendships and can we better train our sales staff? We then worked through a whole series of practical ideas.

Instructions on building an igloo in Abu Dhabi?

The second day of the Publishers' Training Workshop was devoted to the topic of marketing and export. Andrew Hansen, Managing Director of Prestel UK in London, led the group with a two-hour lecture on the secrets of global marketing, which was filled with plenty of British humour. Participants quickly snapped up the address list he brought along of the most important export partners.

In addition to a great deal of practical marketing expertise, Andrew Hansen also explained to the participants how important it is in selling books abroad to offer the right titles to the right target group. A beautiful illustrated book entitled "How to build an Igloo" would garner very few sales in Abu Dhabi.

And that led us right to our next topic – marketing mix and the key question "who are my customers and how do I reach them?" There was great interest in the theoretical basics ranging from sales promotion, push and pull marketing, and advertisement versus media work to finding right price.

"I've already tried many of these marketing tools, but now it is clear to me how to constructively use them together. For instance, from now on I will invite journalists to all of my readings," says Safaa Asmy.

The topic of target groups opened up a totally new world for the participants. I presented SINUS studies and together we had a look at individual milieus and lifestyle patterns. Nadim Mroueh doubts whether one can simply apply such information to the Arab consumer. Youssuf also thinks that people in different countries are quite different.

Because there are just so few readers, publishers are compelled to print popular literature to achieve at least a halfway commercially viable print run. We then discuss whether Stephanie Meyer's "Twilight" could be characterized as popular literature and opinions are quite diverse.

In the group session that follows, the results of our two workshop days coalesce. The participants form three teams to work out a marketing and distribution concept for a book of their choice. Distributor Mohamed Emaduddine and Safaa Asmy present a joint strategy on marketing Asmy’s new children's book, including Carrefour. Inshallah!

Back in the publishing world of Germany, I wistfully think about my Arab colleagues. Despite all their difficulties and problems, I envy them a little. Our market is saturated and is marked by cutthroat competition. By contrast, everything there is just beginning.

Publishers are enthusiastic to learn and try out something new. They are hungry and see a world full of opportunities. Germany is, in this respect, completely built up.

Gabriele Rubner has worked in the publishing field for 25 years. She has worked as distribution and marketing head at various publishing houses and was managing director of the German Fundraising Association. Since 2008, she has run the "Kunst+Reise publishing house" in Bad Homburg.

Cairo's Literature Scene
Between New Dynamics and Political Repression
Arabic literary publishers usually only conduct small print-runs, and readers usually belong to a restricted clique of intellectuals. But recent times have seen a shift in the literary scene on the Nile. Susanne Schanda went to see for herself

Literary Publishers in Cairo
A Special Form of Modern Publishing
The German literary publisher Axel von Ernst was invited to Cairo to talk with Egyptian colleagues about the local literary world, as part of a German-Egyptian cultural programme. He describes his impressions in this report