Today punk is probably the most conspicuous youth movement in Indonesia and it presents a striking contrast to the often distorted Western media image of an insular country full of Islamic fanatics. Christina Schott reports 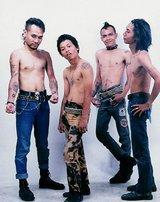 ​​A chaotic crowd of Mohawks, skinheads, and dreadlocks pushes its way to the front of a bare hall in Yogyakarta, the cultural capital of the main Indonesian island of Java. At over 30 degrees under the banana trees, the air is stifling, and the antiquated loudspeakers groan under the political texts of the punk band "Blackboots."

While a small group of punks warms up by slamming with pogo dancing, the Rastafarians, ska, and heavy metal fans are still awaiting the appearance of their favorite bands at this year's Underground Festival of the literature department at the Gadjah Mada University.

Against social controls and prevailing conventions

However different the musical tastes or fashion styles of this colorful crowd may be, they all have one interest in common – they want to express their independence from the prevailing conventions, from the, in their view, still authoritarian government and social controls.

They are rebelling against the predominantly passive attitude of the older generations in their country, who are accustomed to accepting everything that is dictated from above, and they want to bring about change in their crisis-shaken land.

"The apathy in this country is simply horrible! We want to change things!" says Aris Manyul, lead singer of the Blackboots. Like the entire underground movement in Indonesia, the group had its greatest boom after the resignation of the former dictator Suharto in 1998.

Although there had already been isolated bands since the 1980s, the term "underground" was not known until 1994, when, thanks to MTV, international punk, ska, and hard rock also reached the Indonesian charts. The Blackboots have been in existence intermittently since 1996.

Today punk is probably the most conspicuous youth movement in the country with the largest Muslim population in the world. As was the case a few decades earlier in the West, students, like the unemployed and street kids, are attempting to express their dissatisfaction with the conservative society and overly slow political change through nonconformist clothing, music, and behavior, by redefining familiar symbols for themselves. "We are fighting against capitalism and militarism. We support democratization in Indonesia, but in our own way," explains Manyul.

Harassment by the Suharto regime

The Blackboots experienced firsthand that this was not in the interests of the former powers that be. At a concert that took place during Suharto's regime, military police beat the four band members off the stage with their rifle butts, because they did not approve of their critical texts.

Yet, even after the end of the military dictatorship, young people who do not suit the image of the ruling elite continue to have a difficult time in the budding democracy. Even after Suharto's fall, concerts of some groups, such as the hardcore band "Teknoshit," were continually plagued by bomb threats from ultraconservative groups, particularly Islamic but also nationalist.

Under Suharto's "new order" tattoos and long hair were looked upon as unmistakable signs of criminals and oppositionists. For this reason, the parents' generation often finds it difficult to accept it when their offspring suddenly go around with matted hair or tattooed arms.

"Many young people are no longer supported by their parents only because of their appearance, so they have to see how they can keep their heads above water. That means the end of their studies," says the Blackboots singer.

Seven years after the overthrow, however, more and more so-called underground groups are also forcing their way into the mainstream, where Sony, MTV, money, and fame beckon.

The political message is important

Only a few manage not to lose their footing, remain true to their goals, and do not drift off into a fashion trend, like large numbers of Western young people today who buy tattered stockings at high prices in designer shops. Especially in the cities, many young Indonesians outside the punk scene also consider it cool to attract attention with studded belts and spiked armbands.

Much to the annoyance of the "real" punks. "That is only show. We reject every fad. For us the political message is still important. That is what distinguishes the real punks from those out of the catalog," says Aris Manyul.

"Our goal is to restore the confidence of the young people of Indonesia in their own abilities, so that they start to build up something themselves again, instead of simply taking everything for granted."

Rock Music in Iran
A Tightrope Walk between Adaptation and Protest
Despite all the harassment by religious moral watchdogs over the last 25 years since the revolution, Iran has been witness to the development of a vital rock and pop music scene. Although strongly popular among the country's youth, many underground bands in the Mullah state still live in the shadows even today. Arian Fariborz reports

The Burka Band
Setting up Afghanistan's First Girl Group
The idea of shooting an Afghan music video arose at a pop music workshop at the Goethe Institute in Kabul. Thomas Gross from the German newspaper 'Die Zeit' tried to make contact with the band's female singers.

END_OF_DOCUMENT_TOKEN_TO_BE_REPLACED
Social media
and networks
Subscribe to our
newsletter