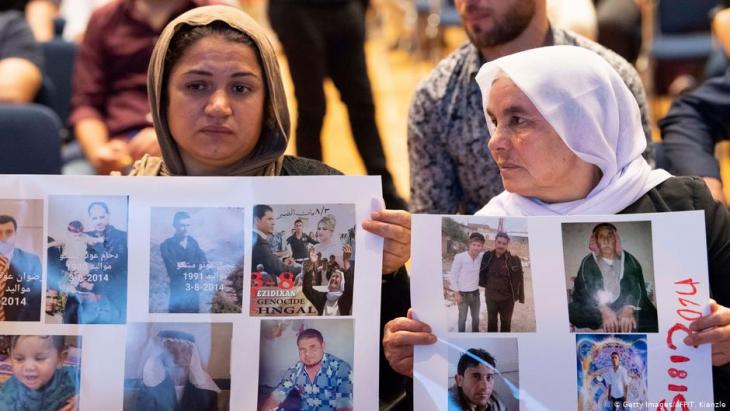 The extremist group "Islamic State" attempted to wipe out the Yazidis. Many thousands died, and survivors tell horrific tales of abuse and enslavement. Now, German investigators have taken up the fight for justice. By Matthias von Hein

"Germany must not be a safe haven for war criminals." It is a sentence police inspector Klaus Zorn repeats several times with conviction. He and his team are determined to collect as much evidence as possible ready to be used for any future prosecutions.

Zorn sits in a high-security concrete building in the quiet town of Meckenheim in southern North Rhine-Westphalia, Germany's most populous state. The Federal Criminal Police Office (BKA) has operated a field office here since the late 1970s, when Germany was still a divided country. At the time, the force's main purview was investigating terrorist activity carried out by the left-wing extremist Red Army Faction (RAF).

Zorn, too, investigates terrorists. He serves as deputy head of the War Crimes Unit, more officially known as the Central Office for Combatting War Crimes under International Criminal Law (ZBKV). Currently, the detective and his colleagues are busy gathering evidence for history's latest genocide: the mass killing of the Yazidis by Islamic State (IS).

The crimes in question happened five years ago in northern Iraq, almost 3,200 kilometres away as the crow flies. In early August 2014, IS fighters attacked the Yazidis, a heterodox ethno-religious group of Kurdish heritage and language. Before the attack, about 500,000 Yazidis lived around their sacred mountain, Sinjar, which lies between the regional metropolis, Mosul, to the west and the Syrian border to the east. IS branded them "unbelievers" and "devil worshippers". The jihadists targeted them systematically and mercilessly.

A clear case of genocide

Nearly 10,000 people – mainly men and boys over 12 – were murdered. More than 70 mass graves have been discovered in the region. About 7,000 Yazidi women and children were abducted, sold as slaves, abused and raped. Hundreds of thousands fled – and only a few now dare to return home. Many survivors remain traumatised. This is especially true of the around 3,500 women and children who were able to escape their enslavement and today are important witnesses of the atrocities.

For renowned international criminal lawyer Lars Berster of the University of Cologne, the case is crystal-clear: the actions of IS against the Yazidis constitute genocide. The decisive factor, he says, is the perpetrators' objective: "They must aim to destroy a national, ethnic or religious group, in whole or in part, and IS' intention to exterminate was very visible."

In Germany, the International Criminal Code came into force in June 2002. Under its provisions, the German judiciary can always prosecute crimes under international law, such as those of the Yazidi genocide, even if they were not committed on German soil and neither the perpetrators nor the victims are Germans.

The clashes in Baghdad between supporters of Muqtada al-Sadr and pro-Iranian militias show that an intra-Shia power struggle is in full swing. An analysis from Cairo by Karim El- ... END_OF_DOCUMENT_TOKEN_TO_BE_REPLACED

Bachtyar Ali sends the hero of his latest novel – "Mein Onkel den der Wind mitnahm" – literally flying. Jamshid is so thin after his years as a political prisoner that a gust of ... END_OF_DOCUMENT_TOKEN_TO_BE_REPLACED

In this essay, renowned Lebanese journalist and writer Hazem Saghieh asks whether the Arab Levant, which stretches from Iraq in the east to Egypt in the west, will remain an ... END_OF_DOCUMENT_TOKEN_TO_BE_REPLACED

Climate change is taking its toll on communities in Iraq. Younes Ajil turns on the tap in his home but nothing comes out. Villages in the south of the drought-hit country are ... END_OF_DOCUMENT_TOKEN_TO_BE_REPLACED

END_OF_DOCUMENT_TOKEN_TO_BE_REPLACED
Social media
and networks
Subscribe to our
newsletter