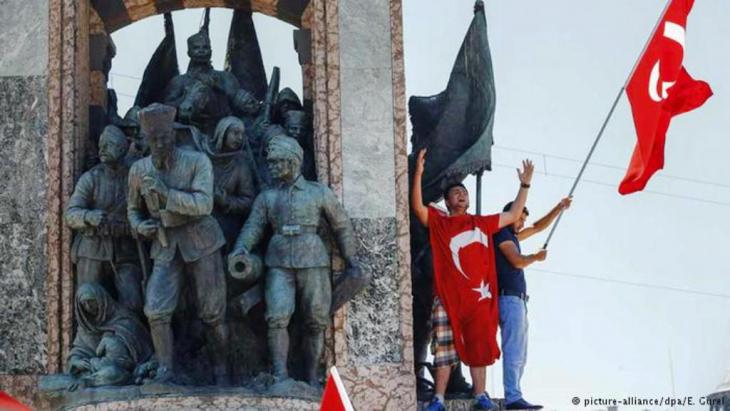 What we can learn from the Turkish and Egyptian examples and why both Erdogan's model and that of al-Sisi are doomed to fail. An analysis by Karim El-Gawhary in Cairo

Turkey and Egypt have one thing in common: in both countries, there has been a military coup against an elected Islamist president. While the coup against Erdogan in Turkey failed, the coup d'etat under the leadership of the former Egyptian military leader and current president, Abdul Fattah al-Sisi, in July 2013 was a success. The military managed to depose President Mohammed Morsi, a member of the Muslim Brotherhood who had been in office for just a year and throw him and his associates in jail.

But both countries have another important thing in common. Both are deeply polarised societies in which the role of religion in politics and the state yet to be negotiated.

Both are divided into two camps: an Islamist faction with the AKP and the Muslim Brotherhood on the one side and a nationalist camp supported by the military apparatus on the other.

In Turkey, the military views itself as heir to the secular Kemalist tradition. In Egypt, the army upholds the anti-colonialist Nasserist tradition, which likewise, albeit with less conviction, subscribes to a more secular ideology. The question as to what extent religion and politics should be separated is now putting the governments of both countries to the test.

Purges rather than reconciliation

As evident as these common aspects are, it is also important to note a few differences. In Egypt, the coup d'etat succeeded because the Egyptian military managed to mobilise the civilian nationalist camp out onto the streets, who saw the military as their saviour from the Muslim Brotherhood.

The coup failed in Turkey because no support was forthcoming from the civilian secular camp. To some extent, this is certainly attributable to the bad experiences of the entire Turkish political spectrum as a result of four coups in the country's history. 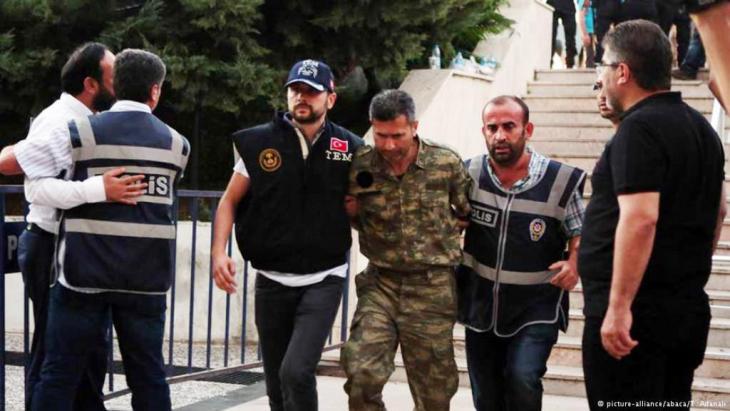 Clamping down: following the attempted coup by the Turkish military, official reports claim that more than 7500 people have been arrested, among them more than 6000 soldiers, 100 police officers, 755 judges and attorneys, as well as 650 civilians

The present situation actually presents Erdogan with a historic opportunity to seek political reconciliation with the other parties. Since all of them took to the streets together to put up a unified front against the coup, they could now sit down together and contemplate a more promising future for Turkey.

Instead, Erdogan and his AKP, aware that the coup attempt has only shored up their power, are politically entrenching themselves more firmly. Erdogan is seizing the moment to purge state institutions like the army and the judiciary of members of the secular Kemalist camp. He has certainly learned something here from the Egyptian example, where it was these two institutions that proved to be the biggest opponents of the Muslim Brotherhood.

The Egyptian military deposed the Muslim Brotherhood and proceeded to launch tens of thousands of trials that made a mockery of the rule of law in order to condemn members of the justice system and put them behind bars. Erdogan's relentless purges of the military and judiciary, once again in the name of revenge rather than enforcing the law, are thus almost a logical step in view of what happened in Egypt.

The fact is, though, that both Erdogan and al-Sisi are not surmounting the gap dividing their societies but only digging it deeper. In their autocratic way, they are trying to eliminate their respective political opponents rather than come to terms with them.

Both in Turkey and in Egypt, a single faction of society is attempting to emerge triumphant from the conflict, behind the symbolic figureheads of Erdogan and al-Sisi, while in reality this is a fight that can simply not be won. Repression does work for a time, as demonstrated both by Turkey and Egypt. But neither model is sustainable. In the end, repression is an obsolete tool, because it does not allow for the underlying conflicts to be resolved through politics.

In Turkey as well as in Egypt, the only lasting path to success will be trying to strike a balance within its polarised society. The most important basis for achieving this equilibrium is not a military coup but a ballot to determine the strength of the respective camps.

Elections alone will not be able to overcome the polarisation either, however, because in the present situation neither the respective Islamist nor the nationalist-secular camp will be able to claim a decisive electoral victory. Instead, the results will surely manifest the existing societal divisions. Whoever wins the elections must take the other camp on board in a government of national unity.

It is no coincidence that Tunisia is the only halfway presentable outcome so far of the Arab revolts against the old regimes. A government of national unity there is trying against all adversity to achieve this difficult balance between conservative Islamists and what we must call for lack of a better term "secular liberals". The first task must be to find a common denominator between the two camps, no matter how small, such as combating youth unemployment or terrorism. If a basis of trust for common progress had been built up there in both camps, a social compromise on the role of religion in politics could also be negotiated in particular in the parliaments.

But we shouldn't fool ourselves. This is a delicate and protracted historical process. Complicating the whole thing further is that it is not only a matter here of an ideology and the role of religion in the state, but also a case of two different political and economic elites that have to divide up the pie between them.

No election results a la carte

And how should Europe behave towards these polarised societies in its immediate vicinity? Europe will have to accept that there can be no a la carte election results. It began with the Algerian elections in the 1990s, when the military denied that the Islamists had won the vote, leading to a bloody civil war. This was followed by an electoral victory of Hamas in the Gaza Strip in 2006, then the triumph of the Muslim Brotherhood in Egypt, not to mention the electoral successes of Erdogan and his AKP in Turkey.

Despite Europe's obvious preference for secular electoral victors rather than Islamists: the only forward-looking European policy would be to support any power capable of overcoming the polarisation in Turkish and Arab societies. Compromises will be necessary that won′t always be to the Europeans′ taste.

If those in Turkey and in Egypt continue to believe that they can disable the opposing political camp through repression, both countries and their societies will only lose in the end.

As long as there is no oncoming traffic in politics and society, Erdogan's Islamist model and the nationalist al-Sisi model will remain one-way streets leading to a turbulent dead end.

Home
Print
Newsletter
More on this topic
The Gülen movement: Erdogan is not Turkey's only problemTurkey and the failed coup: God′s gift to ErdoganSisi and the European Union: The long arm of the dictator
Related Topics
Abdul Fattah al-Sisi, Ataturk, Democracy and civil society, Egypt's army, Gamal Abdel Nasser | Nasserism, History of the Near and Middle East, Islam and democracy, Justice and Development party (Turkey), Kemalism, Recep Tayyip Erdogan, Rule of law, Turkish opposition
All Topics

People in Arab countries have been talking more openly about sex and sexuality for some time now, especially on social media. And for the first time ever, they have the vocabulary ... END_OF_DOCUMENT_TOKEN_TO_BE_REPLACED

Alaa Abd el-Fattah, arguably Egypt’s most prominent democracy activist, has just been handed another lengthy prison sentence. Despite this, a book of his writing has recently been ... END_OF_DOCUMENT_TOKEN_TO_BE_REPLACED

A prominent rights group in Egypt, the Arabic Network for Human Rights, is ending operations just as the country braces for a controversial NGO law. Is this the beginning of the ... END_OF_DOCUMENT_TOKEN_TO_BE_REPLACED

Moncef Marzouki was Tunisia's first democratically elected president after the fall of dictator Ben Ali. Today he is the most prominent critic of increasingly counter- ... END_OF_DOCUMENT_TOKEN_TO_BE_REPLACED

Asef Bayat, professor of Sociology at the University of Illinois, Urbana-Champaign, has been studying revolutions and how they affect people since 1979. In his recent book, " ... END_OF_DOCUMENT_TOKEN_TO_BE_REPLACED

Every year in December, the team at Qantara.de takes a look back at the articles that proved most popular with our readers. This year is no different. Here is a run-down of the ... END_OF_DOCUMENT_TOKEN_TO_BE_REPLACED
Author:
Karim El-Gawhary
Date:
Mail:
Send via mail

END_OF_DOCUMENT_TOKEN_TO_BE_REPLACED
Social media
and networks
Subscribe to our
newsletter