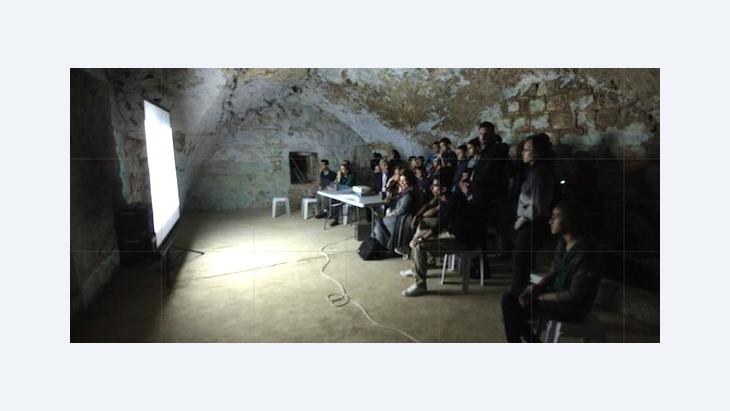 ﻿In today's Palestine, art does not reflect politics – art is politics. That, at least, is the conviction of Qalandiya International – the first Palestinian Biennale. Alia Rayyan shares her impressions from this unusual art event

It should have been art which ought to have been at the centre of attention in Palestine in November, but political events cast their shadow and showed once more that Palestinian reality is a long way from what one can describe as normal. The Israeli attacks on Gaza, in particular, were a painful reminder of the arbitrary tyranny of politics, with its contempt for human existence.

When the environment is full of symbols and daily life is defined by political events and emotion, subtlety tends to get lost in the riot of media reality. At the same time, though, it's often the gentler tones which reflect emotional nuances and the experience of reality better than the media hype. If art can succeed in catching these subtleties and communicating them, it can develop an enormous power to remain in the memory of those who experience it. But it doesn't always work.

When the first Palestinian Biennale, with the title Qalandiya International, opened in November, there were hopes that it would use the opportunity to set a mark in favour of those gentler tones. The event is named after a well-known checkpoint between Ramallah and Jerusalem, and it was held among the olive trees and the ruins of an old Palestinian farmstead in the village of Qalandiya. 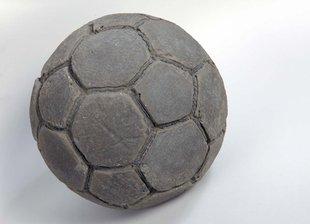 "A play with texture, expectations and the political explosiveness of the wall": Khaled Jarrar's "Concrete" (2012)

​​"Paradoxes meet in Qalandiya", says Jack Persekian, director of the Al Ma'mal Foundation and initiator of the Biennale. "The international airport was once the gateway to the world, and now it's a symbol for division, isolation and fragmentation." The airport has been closed for quite some time due to the Israeli-Palestinian conflict.

He describes the Biennale as a "historic concentration of forces". Instead of competing for funding, seven cultural and artistic organisations have managed to put together an art event of international standing.

For the first time, artistic and cultural institutions in Ramallah, Jerusalem and Nazareth cooperated and combined their separate annual shows into one event.

It started with the idea of cooperation between the annual Jerusalem Show of the Al Ma'mal Foundation and the 4th Architecture Biennale of Riwaq, and expanded in the course of the year to include seven institutions and a range of other elements, including readings, panel discussions and retrospective exhibitions.

"One can't yet really speak of a Biennale," says Persekian, "but we hope that we have started the idea off." Action to follow his words is what is needed now if in two years the ambitious event is to feel more like a Biennale with a concept of its own, rather than like seven presentations by seven organisations.

In contrast to beauty

It doesn't seem surprising that the first Palestinian Biennale of contemporary art took the name of Qalandiya. The name stands for a contrast with the beautiful new world of Ramallah, with its cafés, new cars and endless building boom.

But it's Qalandiya which reflects better than anywhere else the current miserable political stalemate and the reality of the Palestinians. Caught between the promises of Oslo and the sobering reality, there's scarcely any room left for creativity. And that has scarcely been changed by the recent recognition of Palestine by the UN General Assembly on November 29th, which had great symbolic value but has made little difference to the reality on the ground. 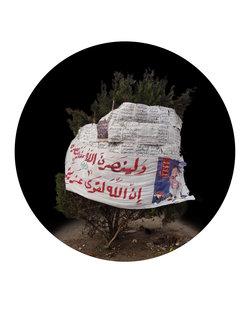 When Egyptians went onto the streets to demonstrate for freedom, they decorated the trees in Tahrir Square with papers upon which they wrote their wishes, hopes, demands and complaints. This collective act is recreated in Mohamed Abouelnaga's "Four Trees in Tahrir Square", also present at Qalandiya

​​The years of standstill have had an effect on Palestinian art. One of the biggest challenges for the art world in Palestine is to provide artists with support for time-consuming research and preparation, in spite of the problems with infrastructure, which will allow them not to simply fall back on the quick fix of political symbols. In the long term, the international art market will only be able to fill this gap little by little.

Apparently political issues often take up the foreground and shut out any intensive involvement with the status quo. Easy applause gives the impression of success, but this is only short-term. Artistic treatment of Palestinian reality, its presence and its problems, turns into a tightrope walk between big gestures devoid of meaning and the intensive involvement with what seems to be of secondary importance. And tightrope walkers risk coming down with a crash.

The work of Khaled Jarra, which was presented at the opening by the International Academy of Arts, provided an example of the problem: it features a cement football on a podium in front of a video of the real wall. The work plays with texture, expectations and the political explosiveness of the wall, but it remains superficial in its artistic treatment, offering the viewer the simplest causal relationship between A and B. Choosing the wall as a symbol for Israeli oppression and occupation offers no new awareness and is an easy answer which does not encourage any further thought.

The centre of Biennale's programme was clearly taken up by the joint exhibition of Al Ma'mal and Riwaq, entitled "Gestures in Time" and curated by Katya Gracia-Anton and Lara Khaldi. Following the tradition of the Jerusalem Show, which takes place every year in the Old City, the curators used the historic environment as their exhibition location. 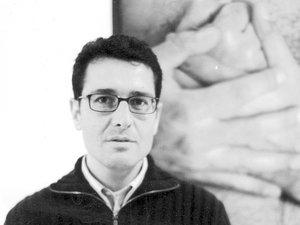 "Paradoxes meet". - Qalandiya initiator Jack Persekian is a curator and producer who lives in Jerusalem. He was chief curator of the Sharjah Biennial from 2005 till 2011

​​Since 2007, the Al Ma'mal Foundation has been involving the immediate environment of the Old City as an element in its Jerusalem Show and thus turned it into one of the most important artistic events in Palestine: East Jerusalem became itself the art space, providing a platform for contemporary art and making a political statement through its very existence.

"Gestures in Time" could only make some attempt to match this significance, since the exhibition didn't just focus on Jerusalem, but also on other places in the north and south of the West Bank.

In the show, Gracia-Anton and Khaldi concentrated on the issue of disillusion with politics and mistrust of government systems in general and asked how far the individual can react to the current situation creatively and aesthetically.

A successful response was provided by, among others, Martin Soto Climent, with his strong concept piece which tried to capture the sense of place of the former Hammam El Ain and to redirect it poetically back to the observer. A hint of evacuation and abandonment remained in the room.

Flight and the search for new forms for the inexpressibility of current existence in the region seemed to be the main topics of the exhibition, as well as the struggle to find a new form which can try to find an answer to the inner emptiness of the capitalist world order. And there were some works which did find a real answer and succeeded in walking the tightrope between the past and the debilitating disillusionment of the present.

Particularly impressive were the poetic works of the team of Ruanne Abu Rahme and Basel Abbas, whose works could be seen in a former tile factory in East Jerusalem which has recently been turned into an exhibition space by the Al Ma'mal Foundation. With their "The Incidental Insurgents: A Story in Parts: the Part about The Bandits", they are among the few who achieve an accurate artistic recreation of the way life feels and of the gestures of the age.

With texts by Victor Serge (1910) and Roberto Bolano (1970) and reports about the rebels Abu Jilda and Arameet in the Palestine of the 1930s, they create an extensive work which, distressingly clearly, finds a visual and spatial reflection of a state of agonising speechlessness and passivity towards apparently omnipotent structures. 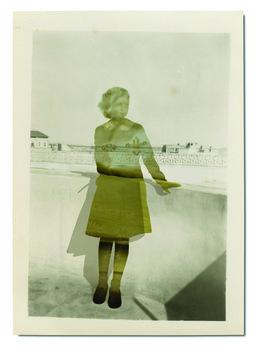 In 2006, Yasmine Eid-Sabbag moved to Burj al-Shamali, a refugee camp established in 1956 in Lebanon, where she lived until 2011. There she conducted a photographic project with a group of young Palestinians as well as archival work on family and studio photographs. The picture shows an untitled work from 2012

​​A video describes a car journey into endlessness – a hectic search for a way out, accompanied with thumping electronic rhythms which are vaguely reminiscent of the beating of a heart. Neon yellow quotations from the literary texts replace a narrative. The force of the pictures and the texts is taken up by the stillness of the installation in the next room: an office has been abandoned in panic, with notes and print-outs about the project dotted around. The observer can immerse himself or herself in the work process of the artists, follow their thoughts and ideas on the topic and draw his or her own conclusions.

In spite of what looks like somewhat academic thoroughness, the work does not fail to express the feeling of being in flight together with the artists. With their installation and video, Abu Rahme and Abbas succeed in finding a language for speechlessness and for the yearning for new forms of resistance. They catch the quiet subtleties which tell far more about the current emotional world of Palestinians than many more political works.

A platform for critical and creative treatment

The cooperation of the main artistic and cultural institutions is certainly the right step at a time when the future is unclear. But that won't be enough to rescue the next Biennale and the Palestinian art world over the coming years. The institutions need to use this opportunity and turn their cooperation into, not just a listing of their normal annual programmes, but a programme of its own, which will boldly ask the urgent questions about the development of the Palestinian art scene – and not just set a sign for the international art market.

Working together, the institutions could take on the challenge of changing the infrastructure for the arts, and they could encourage Palestinian artists to carry out intensive research before they bring an idea to the public.

That would make Qalandiya International into a platform for (self-) critical and creative treatment of our modern times, and thus to a hub of much-needed creativity, and it would set a sign against the stream of loud but empty happenings.

Home
Print
Newsletter
More on this topic
Palestinian Contemporary Art: No Transcendence, Only Laconic CommentaryArts and Culture in the Gulf Region: The End of ToleranceInterview with Rose Issa: "Culture Should Not Be Restricted to the West"
Related Topics
All Topics
Date:
Mail:
Send via mail

END_OF_DOCUMENT_TOKEN_TO_BE_REPLACED
Social media
and networks
Subscribe to our
newsletter