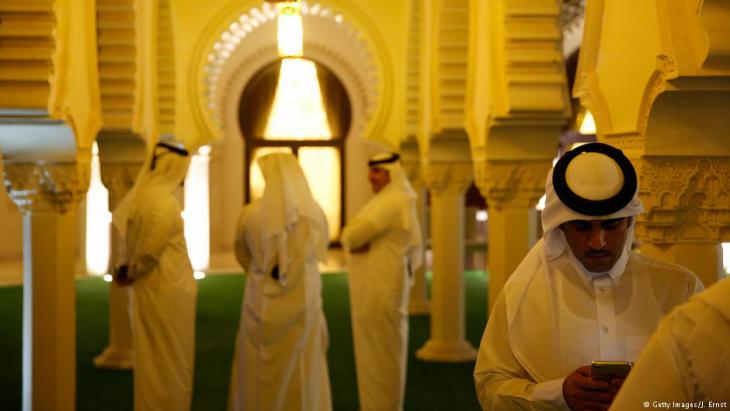 Following the Arab Spring revolts of 2011, Qatar, which carved out a niche for itself as a regional arbiter of conflicts years ago, embraced an interventionist foreign policy that has favoured Islamists – a move that has irked Egypt, Saudi Arabia and the UAE. Commentary by Barak Barfi

When Gulf Arab powers announced on 5 June that they were severing diplomatic ties with Qatar over its ties to terrorists, the message was clear: get in line with regional policies, or pay the price. Nearly a week later, Qatar appears in no hurry to comply. And it is the incoherence of U.S. President Donald Trump′s foreign policy that is perpetuating the rift.

Tainting Qatar as a regional pariah is unlikely to change its calculus, for two reasons. For starters, the country is simply too wealthy to be pushed around easily. Qatar′s abundant supply of natural gas translates into the highest per capita income in the world. Even with trade and travel bans imposed by Saudi Arabia, the United Arab Emirates (UAE), Bahrain and Egypt, Qatar′s economy will not suffer significantly.

The second reason Qatar can afford to wait out its neighbours is its strategic importance to the United States. By hosting the al-Udeid Air Base, which serves as America′s forward operating base in its fight against the Islamic State (IS), Qatar has shrewdly balanced its ties to Islamist extremists with a strong relationship to the U.S..

The country′s links with jihadist groups have drawn American ire, but the U.S. has also benefitted from them. For example, Qatar persuaded the Taliban to release the American soldier Bowe Bergdahl in May 2014; three months later, it helped secure the freedom of Peter Theo Curtis, an American journalist held by al-Qaida′s Syrian affiliate, the al-Nusra Front. Qatar believes its links with groups like Hamas, the Taliban and al-Qaida have softened these group′s positions, making them more amenable to negotiations. 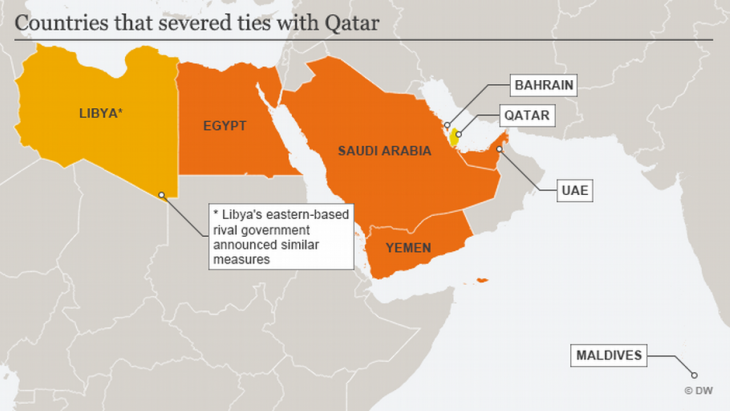 Tainting Qatar as a regional pariah is unlikely to change its calculus: the country is simply too wealthy to be pushed around easily. Qatar′s abundant supply of natural gas translates into the highest per capita income in the world. Even with trade and travel bans imposed by Saudi Arabia, the United Arab Emirates (UAE), Bahrain and Egypt, Qatar′s economy will not suffer significantly

Of course, Qatar′s biggest Gulf neighbours see things differently; but, during past disagreements, U.S. diplomacy managed to keep the peace. No longer. The Trump administration has shown no such capacity for defusing regional tensions. After the diplomatic breakdown, Trump lambasted Qatar on Twitter, appearing to take credit for the Saudi-UAE decision. That has complicated the U.S. narrative, pushing the Pentagon and the State Department to assume a more neutral tone. A Pentagon spokesman praised the Qataris′ ″enduring commitment to regional security″, while a State Department spokesman characterised the U.S. relationship with Qatar as ″strong″ and commended Qatar′s efforts to curb terrorist financing.

Qatar carved out a niche as a regional arbiter of conflicts years ago. But, following the Arab Spring revolts of 2011, it embraced an interventionist foreign policy that has favoured Islamists, a move that has irked Egypt, Saudi Arabia and the UAE.

These four states have spearheaded the anti-Qatar campaign by sealing their borders and closing their airspace to Qatar′s planes. They have also cut off trade ties. Most of the Arab states in the Gulf have demanded that their citizens leave Qatar. The UAE has even made it illegal to post expressions of sympathy toward Qatar on social media.

Though the list of countries severing ties is impressive for its unity, equally noteworthy are the omissions. Kuwait and Oman have not followed suit, despite both being members of the Gulf Cooperation Council (which, in addition to Qatar, includes Bahrain, Saudi Arabia and the UAE). The anti-Qatar bloc could not even persuade its closest allies to follow its lead.

Similarly, while Jordan announced that it would downgrade diplomatic relations, it has offered few details. As long as Qatar can maintain relations with Jordan and Kuwait, the effects of the current campaign are likely to be limited. 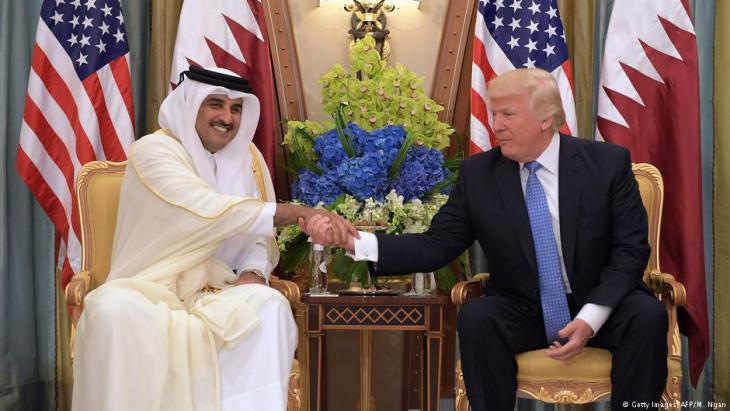 The Trump administration has no capacity for defusing regional tensions: "after the diplomatic breakdown, Trump lambasted Qatar on Twitter, appearing to take credit for the Saudi-UAE decision. That has complicated the U.S. narrative, pushing the Pentagon and the State Department to assume a more neutral tone," writes Barfi

Indeed, previous attempts to isolate more vulnerable Arab states have all eventually fizzled. After Iran captured Iraqi territory in 1986, the same alliance denouncing Qatar today pressured Syria to downgrade ties with Iran. Saudi Arabia used a package of carrots and sticks, including offering to replace Iran as Syria′s chief supplier of oil. But even though Syria was suffering a severe balance-of-payments deficit, several years of drought and reduced foreign aid, it rebuffed the Saudi coalition.

Qatar must also tread lightly with Iran, given their shared ownership of the world′s largest natural gas field, South Pars in the Persian Gulf. Iran has offered to provide the 40% of Qatar′s food supply that it no longer receives from Saudi Arabia as a result of the blockade. Though there is little risk that Qatar will drift too far into Iran′s orbit, any further warming of ties should trouble the U.S. administration, given that Trump′s chief Middle East policy is to isolate Iran.

The U.S. leadership vacuum has, however, opened the door for regional diplomacy, with Kuwait attempting to mediate the current crisis. It is possible that all parties will agree to pull back from the brink in exchange for cosmetic concessions. But it is far more likely that the rift will persist for months, if not years, further unravelling a fragmented Middle East – and underscoring the ineffectiveness of America′s tweeter-in-chief.

Barak Barfi is a research fellow at New America, where he specialises in Arab and Islamic affairs.

In Doha, Arabs from Morocco, Tunisia, Egypt and Algeria are gathering to celebrate the first ever FIFA World Cup to be held on Arab soil. The criticism from Europe? Over the top, ... END_OF_DOCUMENT_TOKEN_TO_BE_REPLACED

After a two-year hiatus, the Arab League re-convened at the beginning of November in Algiers against a backdrop of uncertainty and discord. By Pierre Boussel END_OF_DOCUMENT_TOKEN_TO_BE_REPLACED

Anger in the Middle East is spreading over comments made by an official of India's ruling BJP about the Prophet Muhammad, with various countries summoning New Delhi's envoy and a ... END_OF_DOCUMENT_TOKEN_TO_BE_REPLACED

Women's empowerment in the Gulf has become a tool of deflection, rather than a genuine effort to promote women’s full and equal participation in society. By Mira Al-Hussain END_OF_DOCUMENT_TOKEN_TO_BE_REPLACED

A straightforward message emerged from last week’s meeting in the Negev desert of the foreign ministers of four Arab countries, Israel and the United States: Israel is key to the ... END_OF_DOCUMENT_TOKEN_TO_BE_REPLACED

Hamburg lawyer Eugen Balin is a member of the World Jewish Congress' Jewish Diplomatic Corps. At the end of 2021, a delegation of the Corps visited the United Arab Emirates, which ... END_OF_DOCUMENT_TOKEN_TO_BE_REPLACED

Comments for this article: Playing the waiting game

This is a somewhat lop-sided piece. It fails to mention that Hamas, at least, was a legitimately elected government that most countries refused to recognise; and that Qatar is the main supporter of an oppressed and deprived Gaza. It provides, for instance, most of the educational and medical services Gaza is so desperately in need off.

END_OF_DOCUMENT_TOKEN_TO_BE_REPLACED
Social media
and networks
Subscribe to our
newsletter