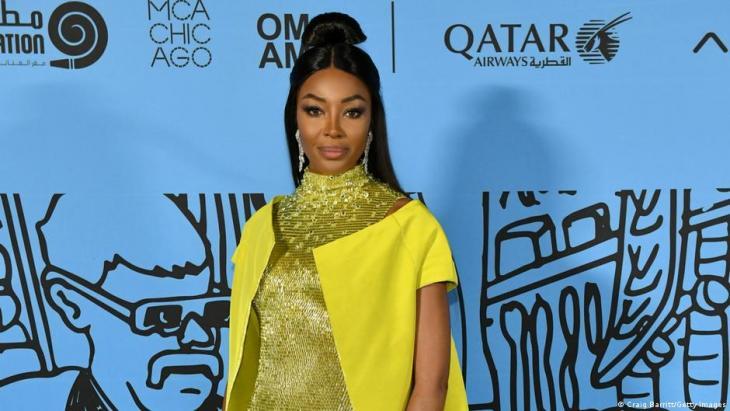 Qatar
How Qatar turns its cash into foreign policy power

For years, Qatar has pursued a "soft" foreign policy that helped make international friends and influence the powerful. It includes spending billions on everything from fashion, art and sport, to charities and industry. By Cathrin Schaer

The glamorous event was covered in all the best magazines. The exhibition in Qatar, coming shortly before the start of the FIFA World Cup and featuring Italian brand Valentino, was described as "panoramic". At the exhibition's opening, former supermodel Naomi Campbell was "the belle of ball", journalists enthused.

But it was not just the fine weather in Qatar drawing high profile fashion names to the small Persian Gulf state.

A Qatari investment fund, Mayhoola, actually owns Valentino, having brought the struggling Italian luxury brand back in 2012. And Campbell was there to launch Emerge, a new fashion charity to promote young designers from emerging economies, in partnership with a Qatari arts initiative called Qatar Creates.

Emerge was initially reported as being an offshoot of Campbell's UK-based charity, Fashion For Relief. But the latter is currently under investigation by the British Charities Commission for potential mismanagement and misconduct. One of the alleged issues is that Fashion For Relief had spent much of the money it raised, around £1.6 million (€1.86 million, $1.98 million), on glamorous events in 2019 but only donated around £205,000 of that to good causes.

The Charities Commission told DW it had appointed interim managers to Fashion For Relief and those managers, UK-based lawyers, said that Campbell's new charity, Emerge, had nothing to do with Fashion For Relief's finances.

"I have no idea where they are getting the money from [for Emerge]," one of the interim managers told DW. It seems likely Campbell's Qatari partners were involved financially. Tickets were also sold to Emerge events in Doha with top tier seats going for thousands. 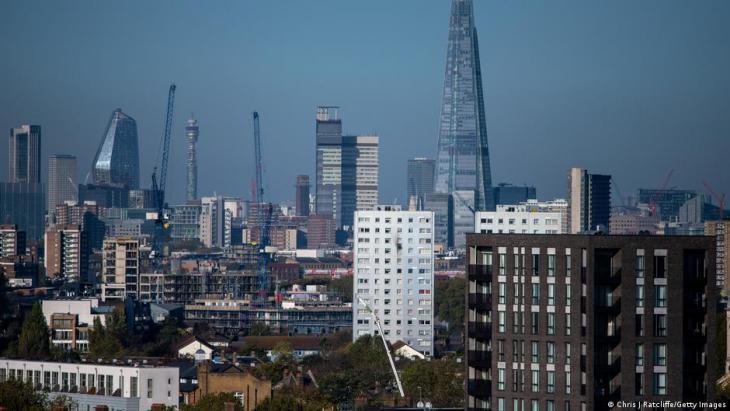 In addition to owning the British luxury department store Harrods and a number of luxury hotels in London including the Ritz and Claridge's, Qatar owns 95 per cent of one of London's most iconic buildings, The Shard

It's not illegal to network

Unlike recent allegations around bribes paid to European parliamentarians, connections like this, between Qatar and celebrities like Campbell, are clearly lawful. But they do provide another example of how Qatar uses its hefty financial resources to burnish its international image with what has been described as "cultural diplomacy".

Other illustrations of the kinds of influential, reputation-enhancing investments Qatar has made through various state-linked investment funds include the purchase of French football club, Paris Saint-Germain.

Among less glamorous investments are Qatar's shares in Siemens, Volkswagen, Porsche and Deutsche Bank in Germany, along with stakes in Heathrow airport, Barclay's Bank and Sainsbury's supermarket in the UK. 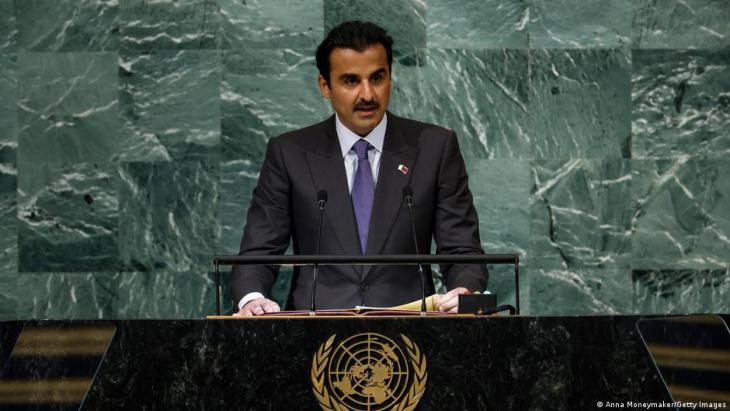 Qatar is a monarchy, ruled over by the Al Thani dynasty. Its current leader, Sheikh Tamim bin Hamad Al Thani (pictured here), became emir of Qatar in 2013 upon his father's abdication

Why is Qatar doing this?

In the 1970s, after natural gas was discovered, the small Gulf state went from being one of the poorest countries in the world to one of the wealthiest. The country is now home to almost 3 million people, of which only between 10 and 15 per cent are indigenous Qataris. The rest are foreigners working in Qatar, who do not have the same rights as the native Qataris.

Qatar has one of the highest per-capita incomes in the world. In 2021, the World Bank recorded it as almost $61,300 per Qatari, an amount higher than many European nations including Germany and France.

Qatar is also a monarchy, ruled over by the Al Thani dynasty, which has an estimated 2,000 members. That includes the current head of state, Tamim bin Hamad Al Thani.

The country is often described as a "rentier state", where the state brings in revenues, or "rent", and then disperses that to citizens. Almost everyone in Qatar is guaranteed a job and Qatari citizens are provided power, water and education for free.

Beyond that, money and power tends to be dispensed by the royal family, usually along the lines of a long-established system of hereditary and tribal ties. 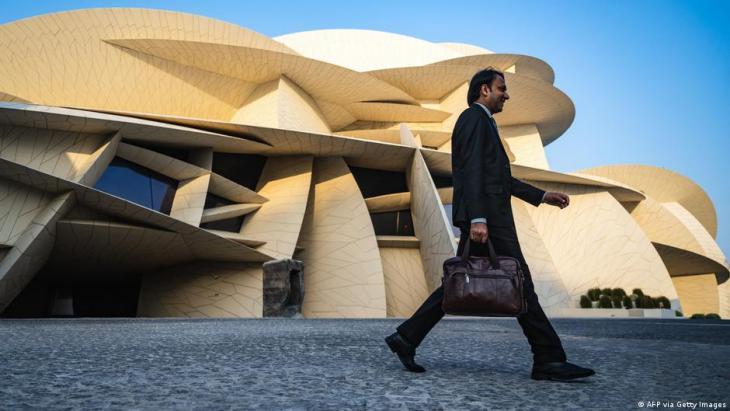 According to Cathrin Schaer, analysts have argued that as the country develops, it is no longer enough for ruling royals to "buy" the loyalty of native Qataris with income from oil and gas, which is why "high-profile, state-funded symbols promoting unity and a Qatari heritage" such as the National Museum of Qatar (pictured here) are so important

Experts say there is no real separation between the state and the ruling family's interests. Although Qatar may have some of the trappings of a democracy, there is no real opposition, no civil society, no genuine elections and limited freedom of expression, especially when it comes to criticism of Qatari leadership.

The Corruption Risk Forecast, a system developed by several academic organisations, including the European Research Center for Anti-Corruption and State Building at Berlin-based private university, the Hertie School, describes Qatar as having "a good governance model based on enlightened despotism".

Since around 2009, Qatar's leaders have been consolidating the country's soft power in foreign policy, presenting a carefully controlled image of the country as a modern, neutral ally. Along with direct lobbying, this includes the multiple, complex layers of investment, influence and communications campaigns. 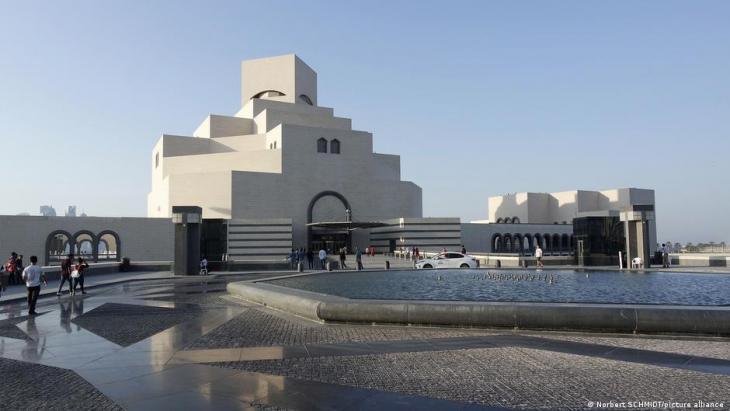 Spending big on major projects is certainly not illegal. "The criticism in Qatar's case," writes Cathrin Schaer, "is that most of the big spending is opaque because those making the financial decisions are not beholden to voters, shareholders or journalists." Pictured here: the Museum of Islamic Art, Doha

Qatar has good reasons for doing this. Most experts agree that Qatar – a small, resource-rich country, lying between large, occasionally threatening and always competitive neighbours like Saudi Arabia and Iran, but lacking its own "hard power" or military – needed to improve its standing and connections on the world stage. That way, it has insurance if attacked.

There are other motives for Qatar's soft power push too. One is simply that it makes good business sense. The Gulf states, some of the world's largest suppliers of oil and gas, know their customers are moving towards more environmentally friendly energies. To survive in the future, they must diversify, and this is where investments in tourism, sport and other sectors come into it.

Another reason involves domestic politics. Analysts have also argued that as the country develops, it is no longer enough for ruling royals to "buy" the loyalty of native Qataris with income from oil and gas. This is why high profile, state-funded symbols promoting unity and a Qatari heritage are all so important, researchers have said. That includes the National Museum of Qatar, the Museum of Islamic Art and even the recently finished football World Cup. 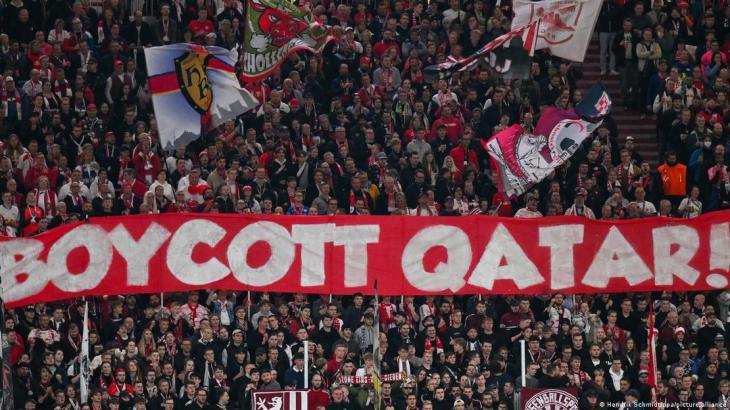 The FIFA World Cup, which has just drawn to a close in Qatar, has brought the host country both good and bad publicity. Fans of the German football club RB Leipzig hold up a banner that reads "Boycott Qatar!" at the team's match against SC Freiburg at the Red Bull Arena, Leipzig, 9 November 2022

Promoting values without practicing them

Of course, none of this is illegal. And all countries lobby for influence and compete on foreign policy. The criticism in Qatar's case is that most of the big spending is opaque because those making the financial decisions are not beholden to voters, shareholders or journalists.

Qatar has tried to make improvements and perceptions of corruption in the country reflect that. Transparency International's ranking on "perceived levels of public sector corruption" have Qatar at 63 points (100 is seen as not corrupt). That's second best in the Middle East, after the United Arab Emirates, and better than some EU states, including Spain, Portugal and Hungary.

Most recently the World Cup has brought its host country both good and bad publicity. Allegations around the most recent EU Parliament scandal have put more focus on Qatar's complicated mix of influence operations and image enhancement too. Might this increased pressure make the country behave in a more transparent way?

"Being more transparent without anyone being able to do anything about it – so without having civic space and an independent media – is problematic," Kinda Hattar, Transparency International's regional adviser for the Middle East, told DW. "And in general, I don't see the Gulf states heading in that direction," she concluded.

How is one to convey the history of Islamic images of Muhammad freed from today’s polarised politics? What are the challenges and pinch points of this particular academic ... END_OF_DOCUMENT_TOKEN_TO_BE_REPLACED

The devaluation of the Egyptian pound combined with rising food prices is taking its toll on Egypt. More and more people are slipping into poverty. Karim El-Gawhary reports from ... END_OF_DOCUMENT_TOKEN_TO_BE_REPLACED

Chinese President Xi Jinping's visit to Saudi Arabia in December 2022 may have rattled Washington, but it simply highlighted the Arabs’ desire to diversify their foreign relations ... END_OF_DOCUMENT_TOKEN_TO_BE_REPLACED

Lebanon was long viewed as the Switzerland of the Middle East. Until relatively recently, billions were deposited in its banks. Gulf states were among the foremost investors in ... END_OF_DOCUMENT_TOKEN_TO_BE_REPLACED

Protests by Western activists at the FIFA World Cup may have backfired and sparked a backlash against gay, lesbian and queer communities in Qatar, critics say. By Cathrin Schaer END_OF_DOCUMENT_TOKEN_TO_BE_REPLACED

According to a recent survey, half of all Iranians say that they have left Islam as a religion, while two-thirds believe Islamic law should be excluded from their legal system. In ... END_OF_DOCUMENT_TOKEN_TO_BE_REPLACED
Author:
Cathrin Schaer
Date:
Mail:
Send via mail

END_OF_DOCUMENT_TOKEN_TO_BE_REPLACED
Social media
and networks
Subscribe to our
newsletter