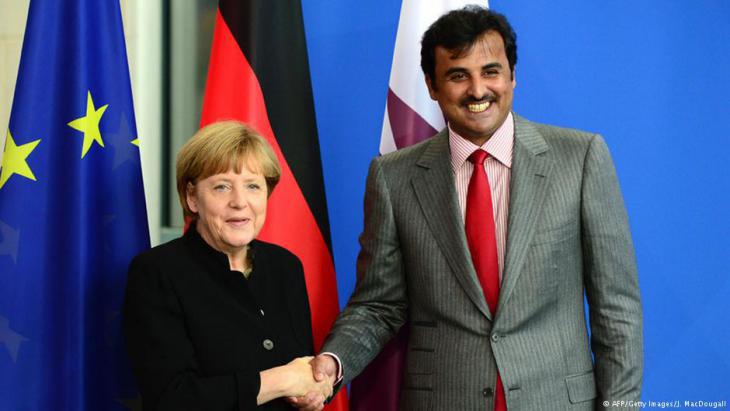 This week, Sheikh Tamim bin Hamad Al Thani paid his first state visit to Germany since being named emir of Qatar after his father's abdication in June 2013. The 34-year-old emir is one of the Middle East's most influential leaders, but his political course is controversial. By Anne Allmeling

His gestures are dignified, his expression impassive: Sheikh Tamim bin Hamad Al Thani is a master at hiding his thoughts. The emir of Qatar knows exactly what is expected of an Arab monarch. For 10 years, the emir of Qatar was prepared for his role as head of state, in part by attending the British military academy Sandhurst. Just over a year ago, he succeeded his father as emir. Today, the 34-year-old is the youngest head of state in the Arab world and one of the most influential.

His powerful position is mainly due to the country's huge oil and gas deposits, which have brought unimaginable wealth to the small Gulf state. With a per capita income of nearly US$100,000 (about 77,200 euros) in 2013, Qatar is a world leader in terms of personal earnings.

In recent years, the emirate has bought stakes in many large corporations, including German companies such as Volkswagen (15.6 per cent of common shares) and construction giant Hochtief (10 per cent). It is also investing in Siemens and Deutsche Bank. According to Qatar's own figures, the little emirate invested US$18 billion (€13.9 billion) in Germany last year, making it the country's biggest Arab investor. It comes as no surprise, therefore, that economic co-operation was high on the agenda when the emir met Chancellor Angela Merkel in Berlin last week for bilateral talks.

Natural resources in the Gulf are finite, and the emirate wants to diversify its economy. This is why the Qataris are investing in international corporations. They hope to increase their capital through price advances and dividend payments.

Michael Stephens, deputy director of the Royal United Services Institute in Qatar (RUSI) think tank explained the strategy: "If Qatar runs out of money, then a lot of social problems might be coming down the line, and if your economy is based on oil and gas, then that is a big problem." "This is a long-term strategy to invest in many, many different countries across the world, including in Europe, that will in the long run – they hope – increase their stability at home and increase their portfolio, economically and politically." 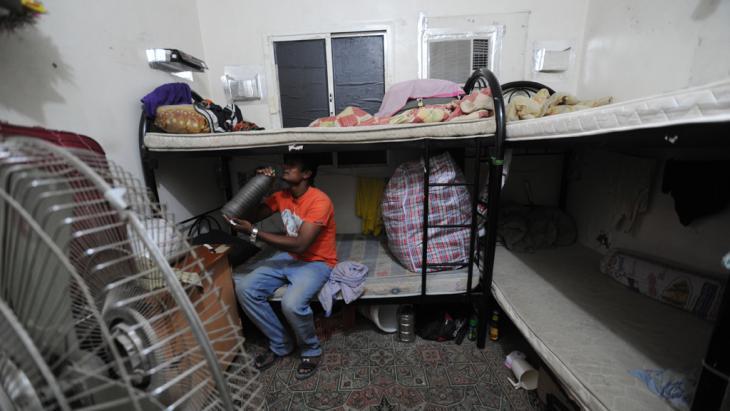 Of the two million people who live in Qatar, less than 300,000 are Qatari citizens. As is the case in other Gulf Arab states, thousands of migrants live there, many of whom come from India, Pakistan and Bangladesh and live in dreadful conditions. In recent months, Qatar has been in the headlines above all for the poor treatment of labourers working on the construction sites for the facilities planned for the FIFA World Cup 2022. Qatar relies heavily on labourers and skilled workers from abroad to meet the needs of its construction boom.

The emir's father, Hamad bin Khalifa Al Thani, increased his country's economic performance sevenfold during his reign (1995–2013). But economic influence wasn't all he was interested in; he also pursued a very active foreign policy, initially as a mediator in conflicts within the Arab world. With Qatar's help, the opposing parties in Lebanon reached a compromise in 2008, paving the way for new elections. A year later, the Sudanese government and Darfur rebels also signed an agreement in the Qatari capital, Doha.

With his ambitious foreign policy plans, the former emir also made numerous enemies, one reason being Qatar's support for the Muslim Brotherhood in the course of the Arab Spring. After the election of Egypt's first democratically chosen president, Mohammed Morsi, Qatar's leadership transferred billions in loans to Cairo. The state-owned television channel Al Jazeera also openly backed the new leaders in Cairo, even though the brotherhood showed itself to be undemocratic as its powers grew. Qatar was, as a result, heavily criticised for its policy towards Egypt.

When Sheikh Hamad surprisingly abdicated in favour of his son in June 2013, many hoped that the young emir would change course. So far he has not succeeded, said Michael Stephens, pointing to Qatar's involvement in Syria, Libya and Tunisia. "Ultimately, Tamim did want to quiet down his country's foreign policy. But it has been very difficult for him to step out of the shadow of his father," he says. 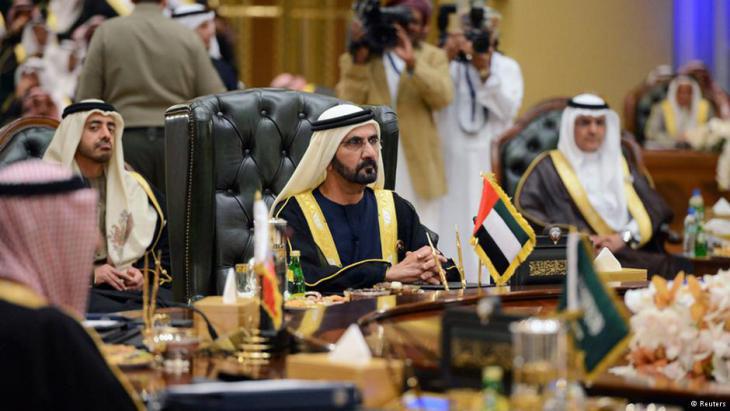 Criticised for going it alone on the issue of the Muslim Brotherhood: in spring 2014, three of the six GCC members withdrew their ambassadors from Qatar in protest at the emirate's decision to continue supporting the Muslim Brotherhood. Pictured here: the Gulf Cooperation Council in session

Dispute in the GCC

There was even trouble recently with the Gulf Cooperation Council (GCC), the club of Gulf monarchies in which Qatar, Saudi Arabia, the United Arab Emirates, Kuwait, Bahrain and Oman are members. In the spring, three of the six GCC members withdrew their ambassadors from Qatar over the emirate's decision to continue supporting the Muslim Brotherhood. The monarchies of Saudi Arabia and the United Arab Emirates consider the Islamist movement a threat to their rule. Since then, however, Qatar seems to have bowed to the pressure. Over the weekend, several Muslim Brotherhood leaders living in Doha were expelled from the country.

Like the other Gulf states, Qatar has pledged its support to the US-launched alliance against the terrorist group known as Islamic State (IS), which has gained control of large swathes of Iraq and Syria in recent months. Says Prof Khaled Hroub of Northwestern University in Qatar: "I think it is very important, of course, to have Qatar on board as this shows a regional consensus against ISIS. In other words, having Qatar, which is perceived as the Islamists' ally in the region, makes a clear differentiation between the type of Islamists that Qatar supports and ISIS and its ilk."

Speaking to German President Joachim Gauck on 17 September, the emir denied reports that the radical Islamic groups are also being supported by funds from Qatar. Rich Qataris are said to have financially supported the radical forces fighting in the disputed territories. But in the future, these financial sources for the Islamists will be "dried up" – a decision agreed to by the alliance against IS. "Qatar benefits even more from being part of this global/regional effort," says Khaled Hroub, "as this alliance will put Qatar on an equal footing with other big states in the region such as Saudi Arabia, Iraq and Egypt at a time where other Gulf countries have tried their best to isolate Qatar and downplay its regional leverage."

The 29 states involved in the alliance, of which Germany is also a member, have said they want to give greater support to the moderate Syrian opposition forces. For Qatar, this could mean a change of course and an opportunity for the young emir to hone his own foreign policy profile.

While the ongoing legal dispute between Qatar Airways and European aircraft manufacturer Airbus has sent shockwaves across the entire global aviation sector, it may also threaten ... END_OF_DOCUMENT_TOKEN_TO_BE_REPLACED

Foresight is needed to turn the tide of German policy. Being independent of Russia must not lead to dependence on authoritarian regimes in the Middle East. By Kristin Helberg END_OF_DOCUMENT_TOKEN_TO_BE_REPLACED

Algeria‘s regime is again cracking down on anti-fracking activists and the unemployed in the country‘s south. Yet EU countries remain keen to scale up their energy cooperation ... END_OF_DOCUMENT_TOKEN_TO_BE_REPLACED

Anger in the Middle East is spreading over comments made by an official of India's ruling BJP about the Prophet Muhammad, with various countries summoning New Delhi's envoy and a ... END_OF_DOCUMENT_TOKEN_TO_BE_REPLACED

The Ukraine war has seen energy prices spike with oil producers in the Middle East making more money than ever. But will it put the brakes on long-planned reforms to diversify oil ... END_OF_DOCUMENT_TOKEN_TO_BE_REPLACED

Women's empowerment in the Gulf has become a tool of deflection, rather than a genuine effort to promote women’s full and equal participation in society. By Mira Al-Hussain END_OF_DOCUMENT_TOKEN_TO_BE_REPLACED
Author:
Anne Allmeling
Date:
Mail:
Send via mail

END_OF_DOCUMENT_TOKEN_TO_BE_REPLACED
Social media
and networks
Subscribe to our
newsletter