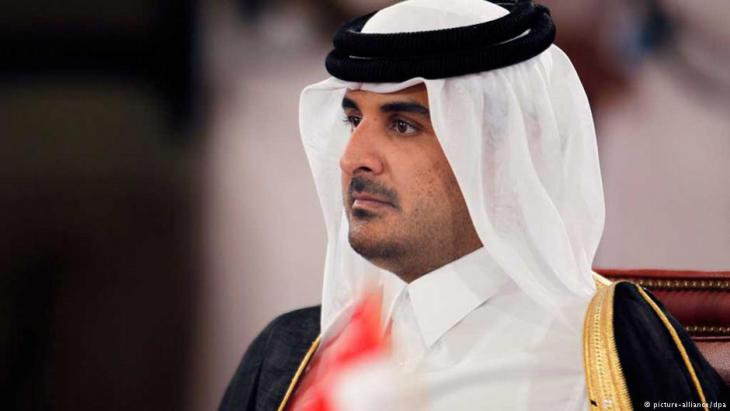 Against a background of long-simmering conflicts regarding Iran and political Islam, Saudi Arabia, the United Arab Emirates and their allies have abruptly severed relations with Qatar. Thanks to the USA′s new stance in the Gulf region, both nations now feel free to drastically step up pressure on Qatar. By Matthias Sailer

Triggering the dispute was an alleged statement by the Emir of Qatar, Tamim bin Hamad Al Thani, on the website of Qatar's state news agency on 24 May. Saudi Arabia's arch-enemy Iran was described therein as a major force for stabilisation in the region, Qatar's relations with Israel as good and the Hamas, an offshoot of the Muslim Brotherhood, as the legitimate representatives of the Palestinian people.

Qatar made it clear that this statement was not genuine and that the news agency had been the victim of a hacker attack. But by that time, the Saudi and Emirati media had unleashed a campaign against Qatar using sharp rhetoric to sternly reproach the country for these positions, which are clearly at odds with those taken by Saudi Arabia and the UAE.

Despite Qatar's protestations that it was a hacker attack, the two countries only escalated their barrage of allegations. The media campaign raged on and access to some Qatari media (in particular Al Jazeera) was blocked in these countries.

In the meantime, the dispute has flared up even further. Saudi Arabia and the UAE have cancelled all transport links with Qatar, diplomatic personnel has been withdrawn and Qatari nationals have been asked to leave the countries in question within two weeks. In addition, Qatar has been excluded from the military alliance fighting against the Houthi rebels in Yemen.

The confrontation reached new heights when Emirati media offered a member of the Qatari royal family opposed to the present rulers a platform for critical comment. He took the opportunity to sharply censure the policies of the Emir of Qatar, even speaking of plans to set up an opposition party.

Beyond the usual sabre-rattling

Statements made by a Saudi lobbyist in Washington had the same tenor: in a Twitter post, he reminded the Emir of Qatar with regard to Qatar's relations with Iran that the deposed Egyptian president Muslim Brother Mohammed Morsi would have done the same and is now sitting in prison. Such actions go far beyond the usual sabre-rattling and represent scarcely concealed threats of a coup d'etat supported by external forces if the Qatari Emir does not start to toe the regional political line dictated by the Saudis and Emiratis. 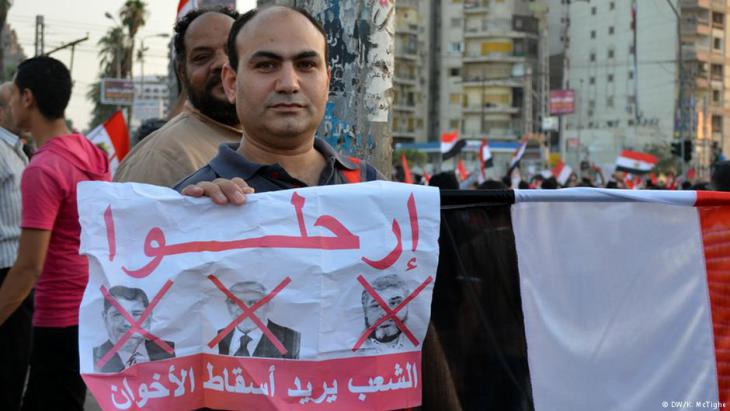 Muslim Brotherhood as provocation: after the toppling of the former Egyptian president, Mohammed Morsi, in July 2013, an event which was welcomed by both the UAE and Saudi Arabia, Qatar came under increasing pressure to cease its media, financial and material support for Islamist groups. Saudi Arabia and the UAE remain of the opinion that Qatar has failed to comply sufficiently with these demands. A diplomatic crisis in 2014 led to these countries and the Kingdom of Bahrain withdrawing their ambassadors from Qatar

Two main factors are behind these developments. On the one hand, there have been tensions between Qatar and the UAE since 2011, when Qatar pledged its support for the Muslim Brotherhood, which at the time was trying to gain power throughout the region by means of elections in various countries.

The leadership both in the UAE and Saudi Arabia viewed the Brotherhood as an existential threat to their own rule. In addition, they also feared a rapprochement of nations supporting the Brotherhood (notably Egypt) with Iran. After the fall of Mohammed Morsi in July 2013, which the two Gulf States witnessed with relief, Qatar came under increasing pressure to discontinue its material, financial and media support for Islamist groups. When it did not sufficiently bow to the demands of Saudi Arabia and the UAE, the situation culminated in a diplomatic crisis in 2014, leading the two states and the small Kingdom of Bahrain to withdraw their ambassadors from Qatar.

Although the crisis was resolved when Qatar made some concessions, the leaders did not fundamentally change their policies. Relations with the UAE in particular remained very chilly. The reason is that, unlike the new Saudi King Salman bin Abdulaziz, who no longer views the Muslim Brotherhood as an acute threat and is even working alongside it in Yemen, the leadership in Abu Dhabi, above all Crown Prince Mohamed bin Zayed, still takes an uncompromising stance toward the Brotherhood.

Qatari relations with Iran a bone of contention

For Saudi Arabia, on the other hand, Qatar's relationship with Iran is a particular bone of contention. The emirate operates a joint gas field with Iran and for that reason depends on pragmatic relations. In the latest anti-Qatar campaign, the Saudi media accused Emir Tamim of secretly meeting with the Iranian General Qassem Soleimani, commander of the Iranian Al-Quds brigades in Baghdad. 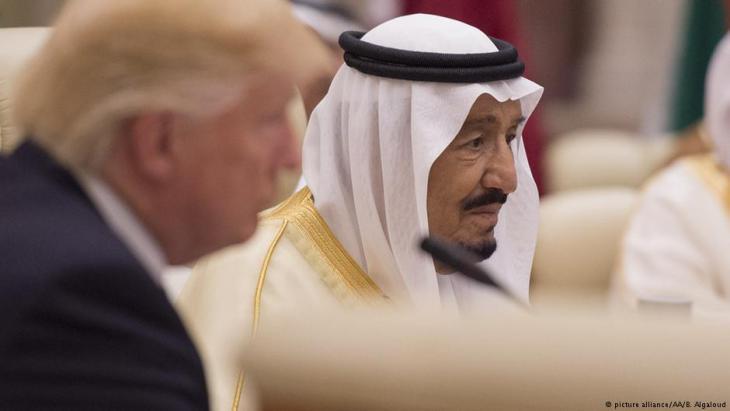 Assured of cover from Washington: "U.S. President Donald Trump has practically given the autocratic rulers on the Gulf carte blanche to take action against ′terrorists′. The problem is that in their view al-Qaida and IS are not the only sources of terrorism. Indeed any form of opposition directed against their ruling houses, including that of Iran, which they believe is supporting terrorists, is also considered as such,″ writes Sailer

The second factor behind the conflict is U.S. President Donald Trump. He has practically given the autocratic rulers on the Gulf carte blanche to take action against "terrorists". The problem is that in their view al-Qaida and IS are not the only sources of terrorism. Indeed any form of opposition directed against their ruling houses, including that of Iran, which they believe is supporting terrorists, is also considered as such.

This is the backdrop against which we also need to regard the current wave of repression against opposition forces (both Islamist and non-Islamist) and critical media in Bahrain and its ally Egypt. Their dictators know they need fear no reproof from Donald Trump when they proceed with brute force against the opposition under the pretext of fighting terrorism, while trampling human rights underfoot.

The Trump administration's critical attitude towards Iran is now enabling other countries to adopt a tougher line too, indicated by the Saudi Crown Prince when he said that the battle against Iran would be waged not on Saudi but on Iranian soil. What exactly he means by that remains unclear, but it should certainly be cause for concern. Some analysts are already speculating about possible mobilisation attempts on the part of Saudi Arabia against Tehran, initiated by Wahhabi minorities inside Iran. 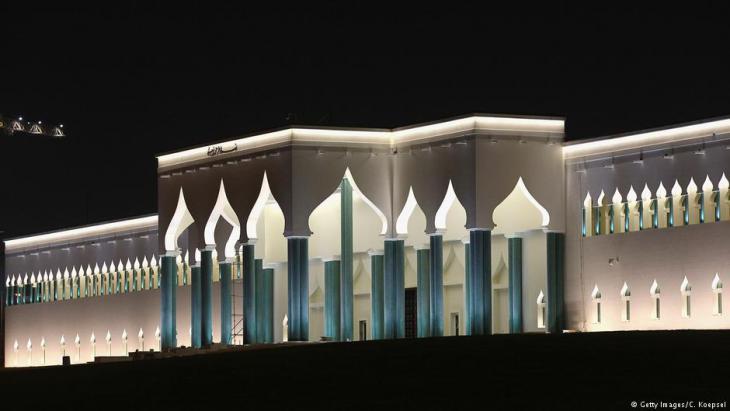 Qatari political establishment under pressure: without warning Saudi Arabia and its allies Bahrain, Egypt and the UAE have abruptly severed diplomatic ties with Qatar. Doha′s links with ″terrorist organisations″ are just one of the reasons given. Jordan and Mauritania have since joined the boycott. Among other things, Jordan has announced its intention to withdraw the licence of Qatari news broadcaster Al-Jazeera in Amman. Quoting C.I.A. sources, CNN has meanwhile reported that Russian hackers were responsible for placing a fake news item on the Qatari state news agency feed. This is said to have triggered the diplomatic crisis

With the new political backing from Donald Trump, Saudi Arabia and the UAE can now afford to try to bring Qatar into line with harsh measures. There is evidence that the statement that sparked the controversy was really the result of a hacker attack on the Qatari news agency. Publishing such a statement was at any rate not in Qatar's best interests.

There are reports that the country has asked for assistance from the U.S. FBI in investigating the source of the cyber attacks. The timing of the attack was clearly carefully chosen: at the climax of a long-running media campaign against Qatar in the USA. At the centre of these efforts is a U.S. think tank, the Foundation for Defense of Democracies, which has drawn attention to itself mainly with pro-Israel and anti-Iranian statements and with a host of articles criticising Qatar and accusing it of supporting terrorism.

Noteworthy in this connection are leaked emails from the Ambassador of the UAE in Washington demonstrating regular correspondence with said think tank. In addition to substantiating extensive lobbying by the UAE against Qatar, the emails also verify that the UAE would like to see the USA close its large military base in Qatar and relocate it to another country.

This would make Qatar even more vulnerable. The anti-Qatar campaign certainly also serves this goal. We can only speculate thus far on who is behind the alleged hacker attack. But for Saudi Arabia and the UAE (and also their ally Egypt) it certainly offered a welcome opportunity to drastically increase pressure on Qatar.

Germany and the EU would be well-advised to distance themselves from the anti-Qatar policy adopted by Saudi Arabia and the UAE. Neither the broad definition of terrorism embraced by the autocratic Gulf States and their allies, which lumps together moderate opposition members with jihadist groups, nor the increasingly aggressive attitude towards Iran will go any way towards stabilising the region.

Matthias Sailer is a doctoral fellow in the Middle East and Africa Research Group at the German Institute for International and Security Affairs (SWP).

"The people aren’t ready for democracy" has been the constitutional basis for Arab tyranny, its favourite slogan and its sacred narrative for more than a century. Yet, asks Khaled ... END_OF_DOCUMENT_TOKEN_TO_BE_REPLACED

A new global database shows a significant gap in reported COVID-related deaths, suggesting the actual worldwide death toll is short by at least 1 million. That's due in part to ... END_OF_DOCUMENT_TOKEN_TO_BE_REPLACED

Two decades after the attacks of 11 September 2001, the West faces the shattered debris of its failure – not only in Afghanistan, but also in Iraq, Syria, Libya and Yemen. What ... END_OF_DOCUMENT_TOKEN_TO_BE_REPLACED

The coronavirus pandemic has turned lives upside down all over the world. In the Middle Ages, however, people lived with epidemics all the time. The best and most famous ... END_OF_DOCUMENT_TOKEN_TO_BE_REPLACED

In Ancient Egypt, the pharaohs had "solar boats" built to take them into the afterlife. One of these boats was discovered in 1954. It has now been moved to the Grand Egyptian ... END_OF_DOCUMENT_TOKEN_TO_BE_REPLACED

Attracting little attention from the world at large, Egypt's military regime has been mercilessly going after dissidents. Now, the first executions of prominent members of the ... END_OF_DOCUMENT_TOKEN_TO_BE_REPLACED
Author:
Matthias Sailer
Date:
Mail:
Send via mail

END_OF_DOCUMENT_TOKEN_TO_BE_REPLACED
Social media
and networks
Subscribe to our
newsletter