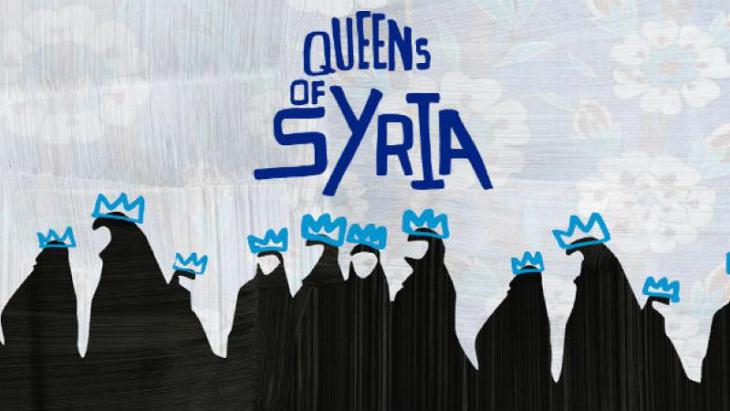 In ″Queens of Syria″, ancient Greek tales of loss and dislocation in conflict echo through to the contemporary realities of Syrian women refugees, whose experiences of war and exile have often been ignored

″Queens of Syria″, a film directed by Yasmin Fedda which had its UK premiere in Glasgow in February, seeks to redress the silencing of the experiences of Syrian women who have lived through the continuing war in their country. In doing so, it also reveals the deeper universals of war that underpin but are frequently obscured by media headlines and graphic IS videos – the deep ache of loss for the homeland and the exhausting task of rebuilding a life after you have watched your homeland burn.

The film follows the rehearsals and performance, by a group of Syrian refugee women now living in Amman, of Euripides′ ″The Trojan Women″. Produced in 415 BC during the Peloponnesian War, the play′s themes of loss, dislocation, and the pain felt by women as war rips through their lives are made hauntingly universal by the rehearsals and the innovative stage production by the women in Amman in late 2013. 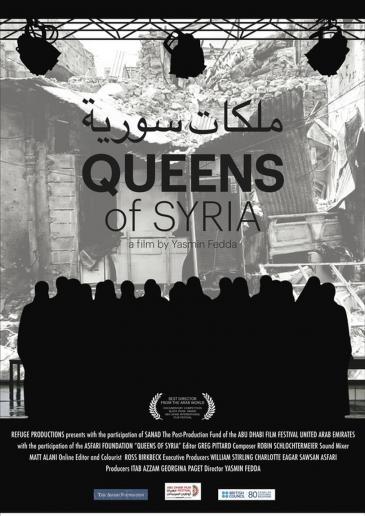 Walking slowly together as a chorus on stage, the women place their hands in front of their mouths as they recite the lines from ′Trojan Women′: ″I have reached the end of my sorrows. I shall leave as my city turns to dust″, moving together both as a chorus and as a presence that shows itself as often voiceless – throughout drama, throughout history and in the present day

The chorus of women acting the lines from the Greek text are interspersed with monologues from their experiences in contemporary Syria, but the tones and themes are so closely linked that it is hard to tell which lines are from Euripides and which are from the lives of women who had fled the Syrian conflict.

In the land of the dead

″My fathers and brothers live in the land of the dead,″ the women proclaim in unison – a line from Euripides but also a fact of their experience in Jordan, where many households are now headed by women as a consequence of the numbers of Syrian men who have died or gone missing as a result of the conflict. Similarly, in the play, the chorus speaks of women who are ″allotted their masters…but all the Trojan women who have not been allotted are in these tents″, conjuring both ancient battlefields and the contemporary image of Zaatari, the refugee camp in northern Jordan where more than 100,000 Syrian refugees now live in temporary accommodation.

Several of the women involved make self-conscious parallels between their own experiences and the stories in Euripides′ play, with one explaining as she cooks in the kitchen of her new, precarious home in Amman: ″Hecuba is so close to me…she lost everything she owned. She lost her children and her family… It′s like us. She was a queen in her house. Her house was her kingdom, she ran it as she pleased. Hecuba says ′I used to run this place but now I am nothing.′ That′s us now.″ Another woman performing in the play, more overtly political in her description of her experiences under the brutalities of Assad′s regime, says ″the character of Cassandra is similar to me. This is because I want to avenge what happened to me.″

The film takes us into the internal dynamics and discussions of the rehearsal process, as the women engage in drama exercises such as each writing a letter to someone inside Syria who they want to see – letters which are then read on the stage throughout the performance of the play.

A slave in the house of my enemies

Fedda′s directorial choices, in interspersing footage from the final performance with scenes from the rehearsals and intimate conversations with the women, contributes to the sense of the many interwoven stories, and the recurring themes of the female experiences of war that are so often sidelined.

As the women chant as a haunting chorus: ″I will be a slave in the house of my enemies. I will have to forget my love and open my heart to my new husband. And then I will appear to be a traitor to the soul of my dead husband.″ The brutality of the Syrian conflict has played out in a gendered way reminiscent of the former Yugoslavia: initiatives such as the Women Under Siege project, and organisations such as Human Rights Watch, have documented “epidemic” levels of sexual violence as a result of the conflict, as well as torture, physical abuse and arbitrary detention committed upon them by Assad′s forces, pro-government militias, armed opposition groups and more recently by IS/Daesh.

The UN has described rape in Syria as a ″weapon of war″ and its after-effects follow Syrian refugee women as they flee the conflict to neighbouring countries. A women′s clinic in the Zaatari refugee camp opened in 2013 by Dr Manal Tahtamouni, who claimed she was seeing 300 to 400 cases a day, mostly from domestic violence and the after-effects of sexual violence, a subject which remains taboo and culturally coded with shame and stigmatisation on the part of survivors.

Euripides′ recurring themes of dislocation and the warped purgatory of life in the aftermath of war echoes through to the experiences of female Syrian refugees, who face a series of difficulties even after they have managed to escape the fighting. The women draw maps of their journeys from Syria to Jordan, and one woman explains she moved house a dozen times within a year.

As the Zaatari refugee camp in northern Jordan mushroomed from 2013, a bridal boutique shop sprang up to cater for the rushed marriages of young Syrian women – many of whom, according to UNICEF, were under eighteen years old, leaving them at increased risk of domestic violence and an increased likelihood that their education will be abruptly ended.

Moreover, both in the Zaatari camp and in Amman where the women of ′Queens of Syria′ have moved to, life as a refugee is stifling and laden with obstacles. While Jordan has been praised for its efforts to accommodate displaced Syrians compared to the levels of discrimination that Syrian refugees have faced in Lebanon, even in Jordan both the official restrictions on the right to work for refugees and exploitations in daily life have left Syrians in the country with a continued sense of vulnerability.

″Queens of Syria″ touches upon these realities while leaving it to the women performing the play to approach such topics in their own time and on their own terms. During rehearsals, the women act out scenes of powerlessness, one recalling an incident from Syria as she acts out a memory: ″fifteen armed masked men came in. You could only see their eyes.″

The play and the film together thus both speak to and for the women, as the final performance and film convey the struggles of women in conflict to the audience, the workshops and rehearsals provide a space for the women to explore and process their trauma through drama therapy.

How can we expect Jordanian women to participate fully in political life if they know that they don’t enjoy the same legal status as their male counterparts, or the constitutional ... END_OF_DOCUMENT_TOKEN_TO_BE_REPLACED

Despite Syria's lengthy civil war, dictator Bashar al-Assad is now being courted by many governments in the Middle East as if nothing ever happened. The reasons for this vary. By ... END_OF_DOCUMENT_TOKEN_TO_BE_REPLACED

Horses and mules have long drawn tourist carriages through Jordan's ancient city of Petra, but animal rights concerns are driving a project to start replacing them with electric ... END_OF_DOCUMENT_TOKEN_TO_BE_REPLACED

Jordanian writer Jalal Barjas' novel "Notebooks of the Bookseller", which won this year's Booker International Prize for Arabic Fiction, was celebrated at a symposium during the ... END_OF_DOCUMENT_TOKEN_TO_BE_REPLACED

Winner of the Student Oscar: a little girl in a bombed-out flat in Syria. The television is her only window to the world – but even this is taken away from her. Nikolas Fischer ... END_OF_DOCUMENT_TOKEN_TO_BE_REPLACED

While Bashar al-Assad is still shunned by the West, which blames him for a decade of brutal war in Syria, a shift is under way in the Middle East, where Arab allies of the United ... END_OF_DOCUMENT_TOKEN_TO_BE_REPLACED
Author:
Heather Mc Robie
Date:
Mail:
Send via mail

END_OF_DOCUMENT_TOKEN_TO_BE_REPLACED
Social media
and networks
Subscribe to our
newsletter