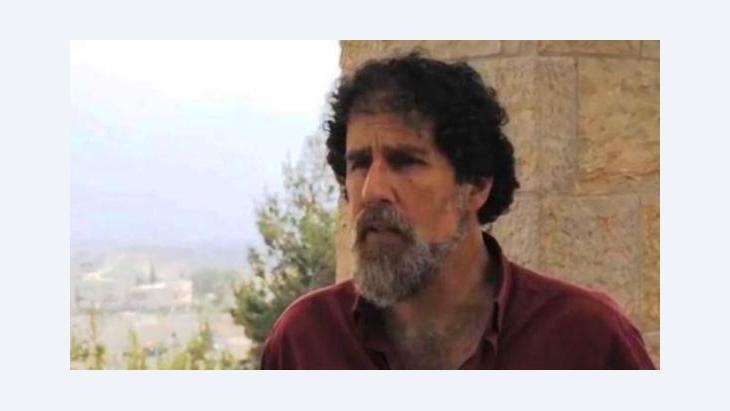 A Different Way of Understanding Judaism

Rabbi Asherman, if you hadn't picked me up, I would have had trouble finding your office on my own out here.

Arik Asherman: (laughs) This office is proof that we are not misappropriating any donations on luxury and comfort, as some people in Israel accuse us of doing.

Are you financed solely by donations?

Asherman: We've been receiving some funds from the EU for several years now.

You provide religious justification for your commitment to the Palestinians. Which sources are you drawing from?

Asherman: Judaism is a religion based on debate. Whenever someone says to you: Judaism says this is right and this is wrong you should have a big red warning light going off in your head.

Now, of all the debates we have in the Jewish world, the crucial one in my eyes today is this: We have a large body of wonderful Jewish traditions and legislation, the Halakha, and we have a wonderful tradition that deals with the question of how we are supposed to treat other human beings. 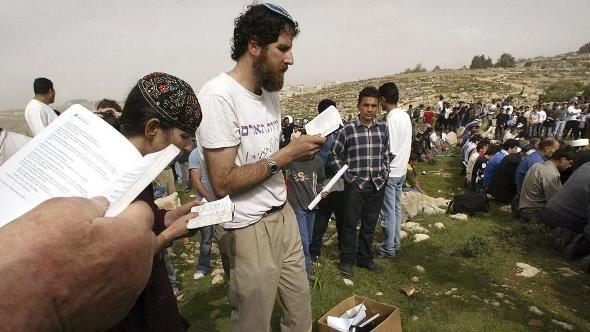 "Challenging the symbiotic relationship that has been created between Judaism and very extremist rightwing positions": Rabbi Arik Asherman (center) and two fellow rabbis at a communal prayer with Palestinian Muslims on the outskirts of the village of Qatane in the Westbank

​​There are some who take all of those wonderful traditions and commandments and say they only apply on how to treat our fellow Jews. And there are those of us who point to the fact that in the first book of the Thora, which is also the first book of the bible, in chapter one, verse 27, it says that "all human beings are created in god's image". It doesn't say: just Jews. It doesn't say: just the rich. It also makes a point in saying both, men and women.

But the settlers would also justify their "right to land" by citing the Bible. How do the two approaches fit together?

Asherman: As I said: I wish I could tell you that I just could prove that they are wrong, that they have no standing, or that nothing that they are saying is based in Jewish tradition. But I can't say that. They also can point to verses and sources.

In terms of the specific question you just asked, the rights to the land: On the one hand we as a human rights organisation have no position as to where the borders should be, or whether there should be a one-state or a two-state or a ten-state-solution. But regarding the land, if you ask me: It is true. You cannot read the bible without understanding that the sign of the covenant between God and the Jewish people is the land of Israel. God gives us that land in perpetuity.

But if we are going to take the bible seriously, that very same biblical theology that says that God has given us this land forever says that at any given point in history the amount of land that we will be living on is going to expand or contract according to our behaviour. 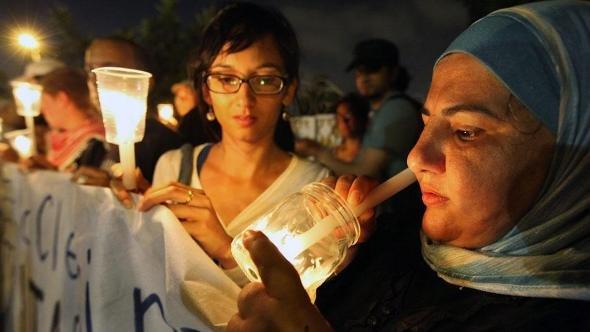 Rabbis for Human Rights demonstration: Houla Hannoun (right), a Palestinian evicted from her home recently in East Jerusalem, lights a candle with other demonstrators, many of them international peace activists, opposite her former home in the Sheikh Jarrah neighborhood in East Jerusalem on 10 August 2009

​​Rabbi Ovadia Yosef, the spiritual founder of the ultraorthodox Sephardic Schas movement and party said that as holy as the land of Israel is, human life is more holy. Therefore, as painful as it is to think about compromise, if you can avoid bloodshed by territorial compromise, he says, as painful as it is, there is no question what you choose.

How does that look in practice, if you take part in demonstrations in the occupied territories, how do the police and army react when they see rabbis walking towards them with hands in the air calling out in Hebrew?

Asherman: Most of what we do is not demonstrations. It is more acting as human shields that physically protect harvesting Palestinian olive farmers from all too often violent settlers. Not all of the settlers are violent, but some of them are. I remember once in a demonstration, there was an officer with his baton beating the younger demonstrators. When he came to me, he said: I can't hit a man with a kippah (i.e. the traditional Jewish head-covering, the editor) and some grey in his beard. So I got out of the beating that way I suppose.

On the other hand sometimes people see me as one of the leaders so they target me in particular. And I am the first to get arrested. Often, the officers say: Bring him out of the way, then everything will fall apart.

And how do the settlers react?

Asherman: Many years ago a settler said to me: We can understand the Palestinians. But we can't understand you. You are a traitor.

The good news is that as a result of a high court appeal that we won – a major victory – in 2006 it is now the obligation of the Israeli army and police to make sure that Palestinians get to every single olive, and to defend Palestinians when they are trying to get to their lands. As a result of that, many Palestinian farmers are getting to their lands they couldn't get to five, ten, even 15 years ago. 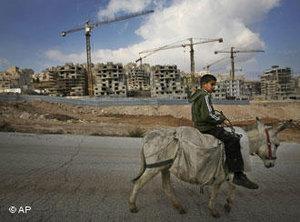 "Israel is a very strong democracy. But what happens in the occupied territories is not necessarily a democracy."

​​I am often surprised at how well known we are in the orthodox religious world. And I think that is because we are religiously challenging that very convenient symbiotic relationship that has been created between Judaism and very extremist rightwing positions.

Have you been threatened personally?

Asherman: Interestingly I think I received more threats in the nineties than since the outbreak of the second Intifada in 2000. I guess people felt they had other things to worry about. With this new animosity that is growing towards Israeli civil society organisations, including human rights organisations, I sadly do believe that the current climate might lead to some kind of violence against human rights activists.

Where do you perceive the line between violence and non-violence?

Asherman: First of all: Israel is a very strong democracy. But what happens in the occupied territories is not necessarily a democracy. But being a part of democracy, civil disobedience has to be a matter of last resorts, not first resorts. If we used civil disobedience every time that we disagree with something, you'd have chaos. But there are times where you do have to put your body on the line. One of the great Rabbis of the previous century, Rabbi Joshua Herschel, said: In democracy, only some are guilty, but all are responsible.

But now, violence is another matter. When we go out, I always tell our volunteers: Our commitment to non-violence includes verbal violence. Even if you get angry – at a settler, at a soldier – don't start shouting and screaming, cursing. For two reasons. A: We don't believe in it. B: It's a boomerang, it doesn't do us any good.

Acts of violence are also being committed by the Palestinian side. As part of your dealings with Palestinians, do you attempt to convince them to forgo violence?

Asherman: That is a huge question. Huge and important. For us Rabbis for Human Rights, our first mandate is to reduce human rights abuses. Our second mandate is to introduce into the intellectual universe of our fellow Israelis, both religious or non-religious, a very different way of understanding Judaism. 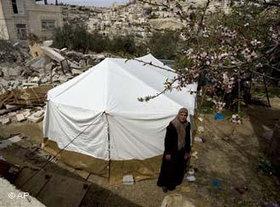 Breaking down stereotypes: Part of the work of Rabbis for Peace is to help Palestinians rebuild their homes

​​Particularly in the work that we are doing with the Palestinians, I think our third and equally important mandate is breaking down stereotypes. I don't know how many times as I was going to meet a family that had had their home demolished and we help them rebuild their home, it's like a déjà vu, it's always the same conversation: If you have a ten year old boy whose home is demolished in front of his eyes, he has seen his parents humiliated by the settlers, what do we say when this ten-year-old boy says: I am going to be a terrorist?

We want him to know that not every Israeli comes with guns and demolishers, that there are also some that come in order to rebuild Palestinian homes.

The real Zionism today is working for an Israel that is not only physically strong, but that is morally strong. It is in our self-interest, it is the only way that we can survive here.

A couple of years ago, harvesting olives, I was surprised that one of the young men I was working with was part of Yasser Arafat's Presidential Guard. He asked me then: Why are you here? It makes no sense, explain it to me. I talked to him about the Jewish tradition of peace, of human rights, justice. He replied: "For us Palestinians, there is no justice."

I am not naïve. There are plenty of the Palestinian security forces that have also been involved in terror. But I know that there is a much bigger chance that this young man chooses the path of non-violence after that experience.

Home
Print
Newsletter
More on this topic
Parents Circle – Families Forum: Working towards ReconciliationRabbis for the Rights of Palestinians: A Common Struggle for East JerusalemDocumentary: ''The Heart of Jenin'': Donation across the Divide
Related Topics
Democracy and civil society, Dialogue of Cultures | Intercultural Dialogue, Dialogue of Religions, Israeli-Palestinian dialogue, Middle East peace process, Minorities in the Muslim world, Places of Dialogue
All Topics

German Middle East analyst Guido Steinberg and television journalist Ulrich Tilgner have both published new books on the conflicts in the Middle East. Their analyses and their ... END_OF_DOCUMENT_TOKEN_TO_BE_REPLACED

In his latest documentary, "The First 54 Years", Israeli director Avi Mograbi demonstrates how catastrophic and traumatising the occupation has been, not only for Palestinians, ... END_OF_DOCUMENT_TOKEN_TO_BE_REPLACED

"The Memory Monster" was a success for Israeli author Yishai Sarid. His latest book hasn't been published in English yet, but given his reach among Anglophone readers, it won't be ... END_OF_DOCUMENT_TOKEN_TO_BE_REPLACED

FIT TLV is the latest initiative by Tel Aviv’s youth to keep on partying during the coronavirus crisis. FIT describe themselves as "Free. Individuals. Together" – cycling, ... END_OF_DOCUMENT_TOKEN_TO_BE_REPLACED

In 2012, fed up with people expressing clear-cut opinions on the rights and wrongs of the Middle East conflict, Canadian conflict researcher and long-time Israeli resident Corey ... END_OF_DOCUMENT_TOKEN_TO_BE_REPLACED

The Islamic Republic of Iran has been subject to sanctions ever since its creation in 1979. The more the regime has entrenched itself and expanded its power in the region, the ... END_OF_DOCUMENT_TOKEN_TO_BE_REPLACED
Author:
Andreas Baum
Date:
Mail:
Send via mail

END_OF_DOCUMENT_TOKEN_TO_BE_REPLACED
Social media
and networks
Subscribe to our
newsletter