Tension is growing in the Arab quarters of East Jerusalem. The city administration plans to allow the further demolition of Palestinian houses. The human rights organization "Rabbis for Human Rights," which vehemently champions the defence of Palestinian rights, has been demonstrating against the demolition. Daniel Pelz reports 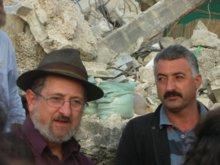 "The path being followed by our leaders is leading us to tragedy." Rabbi Yehiel Grenimann champions the rights of Palestinians

​​Rabbi Yehiel Grenimann drives his car through the streets of East Jerusalem. From behind the windshield, his eyes turn to the first houses in Silwan. This is one of the largest Palestinian quarters of the city – an estimated 50,000 people live in Silwan.

The Old City of Jerusalem with its holy sites, the Dome of the Rock, and the Church of the Holy Sepulchre, is barely ten minutes away. Despite this, hardly any tourist makes the mistake of coming here – and Israelis are an even rarer sight.

"And when they do come, it is only Israeli soldiers or police," says Grenimann. Even he only travels to Silwan on business – but with a completely different mission. The rabbi is the Deputy Director of the Israeli human rights organization "Rabbis for Human Rights." His goal is to help Palestinians whose houses are to be demolished.

"Up there is where the border ran," says Grenimann and points with his finger to a row of hills in the distance. Until 1967, Jerusalem was a divided city – Israel possessed the west of the city, whereas Jordan controlled the Old City, Silwan and the rest of East Jerusalem. "A wall stands here to this day, but it is invisible," says the rabbi. Many Israelis don't dare to come to Silwan – out of fear of its Arab inhabitants. 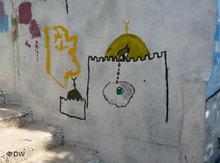 Many residents fear that the demolition of Palestinian homes could lead to the outbreak of violence in East Jerusalem. The image on the wall shows the golden Dome of the Rock shedding blood-red tears

​​As he parks his car, Grenimann puts a cap on his head. Now, his kippah, the traditional head covering worn by observant Jewish men, is no longer visible. The rabbi walks with a sense of determination to the centre of the quarter.

The path is narrow and high white walls line the way to the left and the right. The houses behind them can't be seen. Some of the walls are covered with graffiti. One image is that of the golden Dome of the Rock shedding blood-red tears. The rabbi stops and stands in front of some ruins. Only the foundations remain. Steel beams jut out of the earth and broken wooden boards lie on the ground. It has been almost a year since the Jerusalem city administration decided to demolish the house. Grenimann was a witness.

Waiting for the catastrophe

"I stood there in the back, behind the wall," says the rabbi and his voice wavers a little. "There were police and soldiers on the roofs of the surrounding houses and here on the ground stood the police with horses and bulldozers." As they tore down the house, the district residents reacted in protest. "Then violence broke out – stones began to fly, tear gas was used, and shots were fired. It was a terrible day." 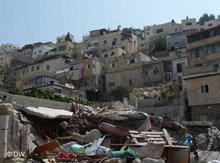 "The city administration has a political agenda. They want our land," says Fakri Abu Diab, a homeowner in Silwan

​​The man from the house across the way still suffers nightmares from these events. His house could be the next one to be demolished. Fakri Abu Diab is a stocky 48-year-old man. Yet, his black hair has long since turned grey – he could easily be taken for a man ten years older. "We are waiting here for the catastrophe," he says with a sad smile and offers a place on the soft sofa in the living room to sit down.

He has already received the eviction notice from the city authorities. "When they come with their bulldozers, I am going to lock myself in my house," says Diab. "I'd rather be buried under the rubble than to voluntarily move out of my house."

An archaeological park in a residential area

The city administration wants to demolish 22 houses. The figure of 88 houses has even been discussed. An archaeological park for tourists is to be built in their place. City Hall regards the matter as a clear case. Hardly any of the residents possess a property deed for the land on which their house stands nor can they present a building permit for the house.

"I tried to obtain the necessary documents for three years," explains Fakri Abu Diab with barely suppressed anger. "I went to City Hall almost every day and brought with me structural surveys from architects and building engineers, as well as other documents." The accountant and father of five does not believe that this is simply a matter of failing to adhere to municipal building codes. "The city administration has a political agenda. They want our land," says Diab.

Rabbi Grenimann won't quite express himself as forcefully, but he also believes that the city authorities are refusing to issue deeds to the residents.

A common front against the destruction

Other residents of Silwan and those in other parts of Jerusalem also fear that the city administration plans to take away their houses. There is currently an increase in the number of Jewish settlers moving into traditionally Arab quarters. The "Rabbis for Human Rights" attempt to act together with Arab residents to prevent the expulsions. They have demonstrated regularly, called in lawyers, and brought journalists to Silwan in order to stop the destruction of houses.

Yet, very few Israelis take part in the demonstrations. "By no means all Israelis support the policies of the city administration or the current government," says Rabbi Grenimann. "We have arouse these people, because the path being followed by our leaders is leading us to tragedy." Nonetheless, until now, the Rabbis for Human Rights have only managed to muster up around a hundred members.

Israeli Women and Checkpoint Monitors
Concerned about the Dignity of the Palestinians
Yehudit Kirstein Keshet and other Israeli women like her have spent six years monitoring activities at Israeli checkpoints leading to the West Bank. What motivates these women to monitor the men who are supposed to be protecting them? Beate Hinrichs reports

Book Review Ilan Pappé: "The Ethnic Cleansing of Palestine"
Not Just Collateral Damage
The Israeli historian Ilan Pappé takes a new look at the expulsion of the Palestinians in 1948. According to Pappé, the Palestinians' exodus was not an unfortunate side-effect of the war, but an act of ethnic cleansing planned long in advance. Martina Sabra reports on the book

END_OF_DOCUMENT_TOKEN_TO_BE_REPLACED
Social media
and networks
Subscribe to our
newsletter